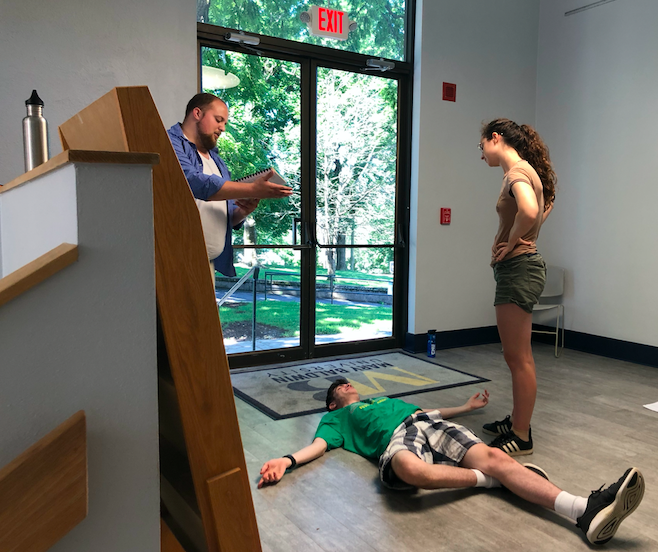 This morning Kim began by leading a warm up based in getting in-sync with a partner. It was all about moving slowly and maintaining eye contact. Then, after some brief script notes, we jumped into blocking. Kim worked with the battle of the wooing tutors (Hortensio and Lucentio in disguise) for Bianca’s hand with Sophie, Caroline and Isaac. At the same time, Austin and Taylor began working with Liam and Marielle on the physical altercations between Katherina and Petruchio when they first meet. The rest worked with me, Margot, on textwork and body leads before heading back in to tackle the rest of Act II, Scene I.

“One thing more rests, that thyself execute, to make one among these wooers.”

—Lucentio (Act I) about Tranio disguising himself to help get Bianca’s hand in marriage.

“By maintaining eye contact you are saying ‘I’ve got you.’”

—Kim during the warm-up

“I feel like Gremio makes the most dirty jokes in this whole show.”

“I used more eye contact today and I felt more connected to everyone on stage.”

—Sophie (Bianca) thinking back on what she did differently today.

Love and the art of wooing have always been complicated things. Long long ago before William Shakespeare was even a blip on the radar of the earth, it was all about appearances. The bird who had the brightest feathers or the deer who won the most battles would be the one to woo its mate successfully. Genetics played a large role, but so did behavior. Just because one buck was larger than another did not necessarily mean that he would win the doe. In The Taming of the Shrew, the wooers use many different behaviors to try to win the hand of the one they love.

Lucentio and Hortensio use disguises to get closer to Bianca. They woo in the privacy of Baptista’s home as tutors. They use different tactics to spend more time with her. Lucentio continually convinces Hortensio that his instrument is out of tune so that he can tell Bianca who he is between Latin phrases (Act III, Scene I). Lucentio also has his servant, Tranio, gallivanting around Padua in Lucentio’s place. Tranio (as Lucentio) is able to convince Baptista that he (Lucentio) is the one who should marry Bianca because he is more wealthy than Gremio. Lucentio’s behaviors allow him to win Bianca’s hand.

Petruchio, on the other hand, has no competition, so his wooing takes a different turn. He uses wordplay with Katherina to try to get her hand. By the end of Act II, Scene I, she is not happy with the match. She says “I’ll see thee [Petruchio] hang’d on Sunday first” before she marries him. All it takes is Petruchio saying that they made an agreement to act as if they hated each other in public for Baptista to accept Petruchio’s proposal.

Wooing is full of twists and turns just like most Shakespearean comedies. Bianca and Lucentio find their way out of the mass of suitors and Petruchio wins an enemy-less battle to marry Katherina.