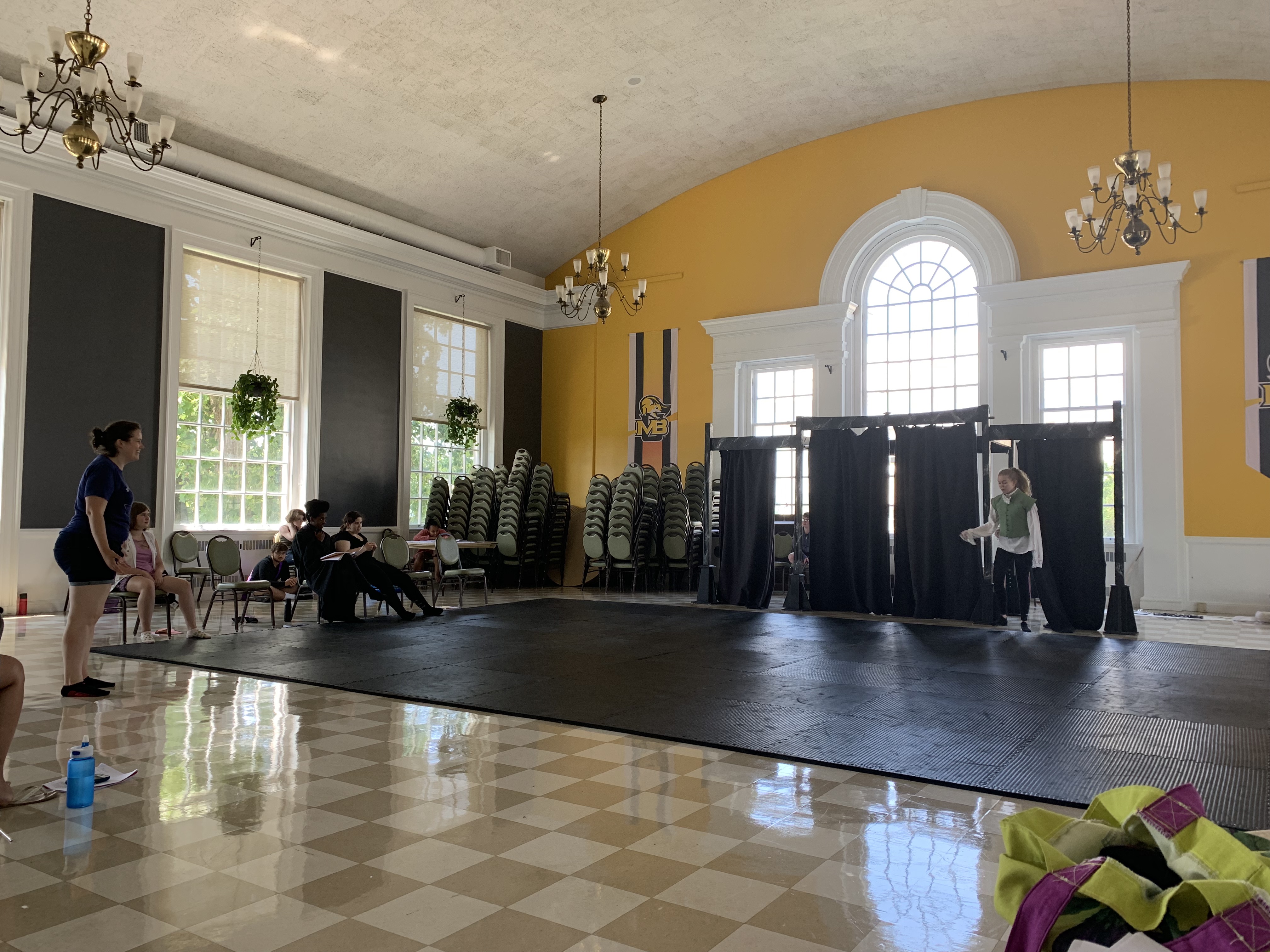 Today was a nitpicky cleaning day. After running each Act, we stopped for Emily to give specific notes. In chunking up rehearsal this way, we were able to focus on the greater collective objectives across each act as well as the pace of the story. We got to watch Pompey (Lizzie), Abhorson (Hope), and many other characters build on specific moments exponentially. A typical Week 3 rehearsal, it was a day for everyone to observe the director at work and learn by watching their peers. Teamwork at its finest.

“As this is true,

Let me in safety raise me from my knees,

Or else forever be confixéd here

“You see he’s in prison… Are you really surprised?”

“What I mean by ‘slower’ is not slowing down your speech; it’s really just about rounding out and giving clear diction to each and every one of the words. It’s not racing over words but rather giving them each their fair amount of consideration.”

– Emily’s note to the whole cast.

“Do you want me to just… crumble?”

Emily’s note about diction tickled my science brain a little. I started thinking about the ways in which our mouths move and create intelligible sound. And then I started thinking of the many tongue references across Shakespeare’s canon. I cannot stress enough that word “many.” Shakespeare was OBSESSED with the human tongue. In fact, the only explicit acting advice that Shakespeare ever gives us is when Hamlet tells the players how to act, and he starts, first and foremost, with the tongue: “Speak the speech, I pray you, as I pronounced it to you, trippingly on the tongue” (3.2). So, with this particular quote in mind and as is normal for any dramaturg, I got to Googling. I typed “physiology of the human tongue” and this is what I found:

The human tongue is not, as is largely believed, the strongest muscle in your body. For one, there are many ways to measure muscle strength, but, even then, the tongue wouldn’t even qualify. But it is one of the few muscles in the body that is incredibly difficult to tire out, and this is because of its biological structure. The human tongue is actually a system of eight different muscles – four that anchor it to the head and neck bones and four that power its multidimensional movement. The highly repetitive tissue structure allows the tongue to utilize different parts of itself, avoiding fatigue. Because of this complex level of muscular autonomy, the tongue is called a muscular hydrostat. In all, the human tongue is an exceedingly beautiful thing, and we should consider ourselves VERY lucky that we have them.

Now, this post (if you’ve read until this point) has probably seemed… a bit… random. But human biology is something that has really guided my own work in theatre – as an actor, director, even a sound designer. As my last blog post mentions, the early modern Europeans were very concerned with the human body in art and culture, and Shakespeare used his own empirical knowledge of the body – having been around actors all the time and an actor himself – to write text that physiologically and psychologically activated it. Our body, as Shakespeare wrote for it, is our primary storytelling instrument. Whether or not conservatory training explicitly includes a lesson on the biophysics of the human spine or vocal cords, it nevertheless focuses on tuning the human instrument to its finest – that is, understanding the human body’s mechanisms well enough to enhance the use of the voice. Freeing the Natural Voice, a famous book written by renowned vocal coach Kristin Linklater (also the co-founder of Shakespeare & Company with Tina Packer back in 1973), proposes a training regimen for freeing the vocal mechanism (as opposed to proposing a vocal technique). Our vocal mechanisms utilize the entire body. If you rest a hand on the front top edge of your pelvis and say “Shakespeare,” you’ll be surprised to find that, in order to really support that word vocally, you have to engage muscles all the way down there! This total-body focus is the core of Linklater’s technique and something I was reminded of when I Googled “physiology of the human tongue” in rehearsal. So much of our training here is based (however implicitly) in human physiology, and I’m convinced that my own summer at ASCTC back in 2016 – particularly the vocal and music classes led by current and former ASC company members Allison Glenzer, Chris Johnston, and Alex Sovronsky – largely informed my decision to keep studying human biology when I got to school, even though I was (and still am) hell-bent on sticking with Shakespeare. As someone who debated, for a long time, about whether I should study biology OR Shakespeare, I can now confidently say, trippingly on my own tongue, that the two couldn’t go together more perfectly.