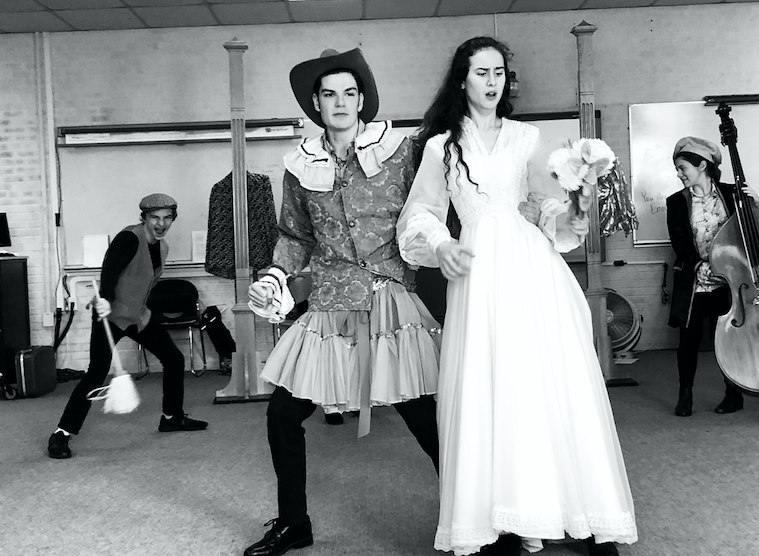 Pictured: Liam (Petruchio), Marielle (Katherina), Caroline (Hortensio) and Teagan (Grumio) during the exit of the wedding.

This morning we continued to make fixes to blocking. After that we went into fight and music call before adjusting our preshow song. Then we ran up through the first scene of Act IV.

“Happily to wive and thrive.”

“Kisses can never be too slow.”

“Thank you so much!”

“Margot writes about our show everyday.”

“Sometimes she quotes you.”

“I often quote you.”

In rehearsal today, we worked things and spent a lot of time perfecting the wedding scene of Katherina and Petruchio. That scene is all about contrast. The contrast between what Petruchio should be wearing and how he should be acting with everyone else in the scene is what creates the comedy. He is dressed in a tutu, cowboy hat and doublet while Katherina is in a full wedding dress.

Weddings in the early modern period were still all about money and property. Baptista pays Petruchio to marry Katherina and Lucentio gets to marry Bianca because he can assure that she will get more financial benefits. By making the marriage ceremony a comedic affair does it show how in this period women were gaining more autonomy and that women being used as property was going out of fashion? Maybe, maybe not. It is interesting to note either way.