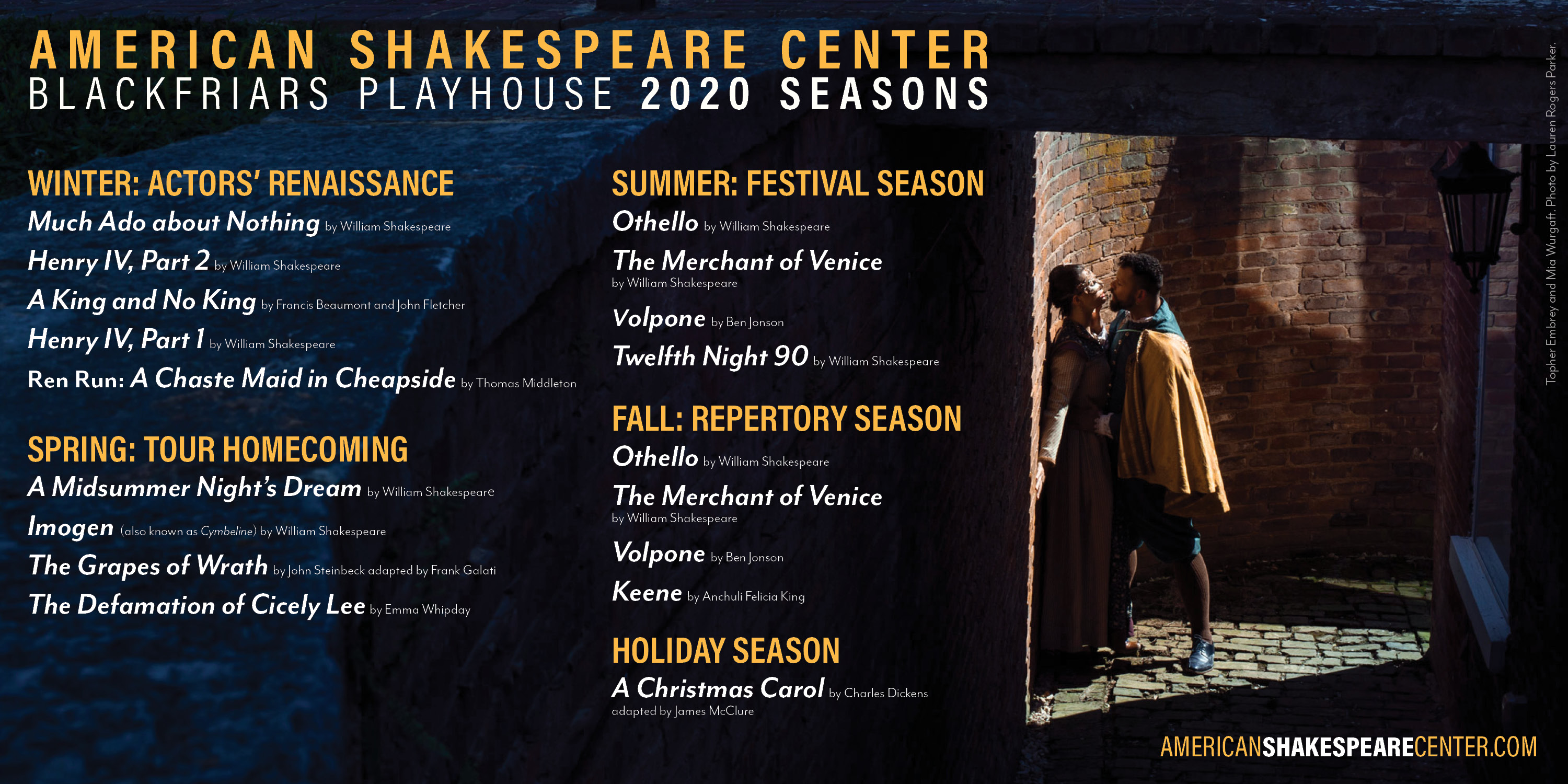 In a Sunday presentation broadcast from the stage of the Blackfriars Playhouse – the world’s only recreation of Shakespeare’s indoor theatre – American Shakespeare Center (ASC) Artistic Director Ethan McSweeny announced the fifteen plays produced over three distinct seasons that will comprise the company’s 2020 artistic programming, his second year and first full season at the helm.

“Each of the three primary seasons at ASC has its own troupe of actors and artists, and each its own aesthetic vocabulary, while all remain true to ASC’s commitment to exploring dramatic work through the prism of Shakespearean performance conditions and embracing shared light as a central component of creating a sense of community between actors and audience as well as among audience members themselves,” said McSweeny.

The marquee event in the ASC calendar is its Festival Repertory Season, which will delight audiences from June to November 2020.  If summer 2019 saw ASC audiences in Rome, then 2020 will find them in Venice when the company produces Shakespeare’s Othello, The Merchant of Venice, and Ben Jonson’s viciously satiric comic masterpiece of lust and avarice, Volpone.

Taken together, the three “Venetian” plays explore the politics of evil and jealousy, the politics of social exclusion, and the politics of greed.  All three will be performed in rotating repertory and feature a company of 16 actors playing multiple roles as well as a multitude of musical instruments.

The summer season from June to August will also include ASC’s 2020/21 National Tour company performing Twelfth Night 90 – a special adaptation of Shakespeare’s beloved comedy of mistaken identity and romantic chaos at a length suitable for family audiences of all ages.  Local arts partners The Heifetz International Music Institute will return in July and August with their Tuesday night “Stars of Tomorrow” series as well as a special concert staging of Henry Purcell’s baroque opera Dido and Aeneas, and The Staunton Music Festival will follow in August with their own baroque-inspired concerts on the same stage.

In the Fall, the Venetian rep will be joined by the co-winner of Year 2 of ASC’s Shakespeare’s New Contemporaries initiative, a groundbreaking, industry changing undertaking to discover, develop and produce 38 plays inspired by and in conversation with Shakespeare’s work.

Inspired by Othello and set at a conference of Shakespeare scholars, Anchuli Felicia King’s Keene tells the story of a lone African-American PhD candidate named Tyler and his thesis on Ira Aldridge, the first black man to play Othello.  Into the mix comes Kai, a Japanese musicologist with an obscure paper, who falls in love at first sight with Tyler. At night, Tyler dreams of Ira and Kai dreams of Tyler, and neither of them see coming the betrayal of a close ally.  A heartfelt ode to the experience of always being the second-class genius of color, Keene is an incredible cocktail of early career academia, Shakespeare’s Othello, and the power of American pop.

Rapidly making a name for herself, playwright King recently had her first post-graduate play White Pearl premiere at London’s fabled Royal Court and is scheduled for an American premiere of the same play in November 2019 at Washington DC’s Studio Theatre.  “Keene is my way of aligning scholarship around Othello with its performance history,” says King, “while simultaneously exploring the compromises and imposter syndrome so often experienced by people of color when they enter historically white spaces.”

Winter 2020 kicks off with The Actor’s Renaissance Season, ASC’s deepest dive into the early modern era when the company brings its exploration of the Elizabethan stage into the rehearsal hall.  It’s the season that last year led Washington Post theatre critic Peter Marks to declare: “I arrived a skeptic, I left a believer” in the extraordinary work that a company of 12 veteran performers can create without a director.

The “director-less” Ren Season will feature Shakespeare’s perennial favorite Much Ado About Nothing; a continuing journey from 2019 into Henry IV, Part 2; a return to Beaumont and Fletcher’s A King and No King (first performed in the inaugural 2005 “Ren” Season); and a revival of last year’s Henry IV, Part 1 that will allow audiences to see the complete Henry IV saga in a single day.

In addition to those four offerings, the company will also stage a script-still-slightly-in-hand “Ren Run” of Thomas Middleton’s wicked Jacobean comedy A Chaste Maid in Cheapside.  The works run in repertory between January and April, with special Renaissance Weekends during which dedicated fans can see the entire season in a three-day binge.

“We know that revivals played an enormous role in the business models of the early-modern theatre,” says Director of Mission Dr. Ralph Alan Cohen, “The 2020 Ren Season will be the first time that ASC has explored what that might mean in practice, continuing our commitment to practical scholarship uniting page and stage.”

Spring 2020 will feature the return of ASC’s National Tour Company, eleven actors and two managers who take to the road in September travelling from Maine to Texas performing a three play repertory in the classic ASC shared-light manner to nearly 17,000 audience members at colleges, universities, secondary schools, performing arts centers, and small towns where they are the only Shakespeare seen all year.

The Tour returns for eight final weeks on the Blackfriars stage with road-tested productions of A Midsummer Nights Dream directed by Nathan Winklestein]; Imogen (aka Cymbeline) directed by Vanessa Morosco; and the Frank Galati adaptation of John Steinbeck’s The Grapes of Wrath directed by Jose Zayas.

To this repertory, the Tour will add the second of ASC’s Year Two SNC recipients, Emma Whipday’s The Defamation of Cicely Lee.  Although selected in a blind competition from among nearly 200 submissions, playwright and scholar Whipday is no stranger to the Blackfriars stage, having penned audience favorites Shakespeare’s Sister and the adaptations of Jane Austen’s Emma and Sense and Sensiblity.

The Defamation of Cicely Lee is set in the north of England in 1611 where Shakespeare’s Cymbeline has recently arrived on tour and scandal is rocking the town of Corbridge as maidservant Cicely is accused of committing adultery with her former master.  Says Whipday, “Engaging with Cymbeline allowed me to imagine myself back in Jacobean England, where a woman’s reputation could be destroyed by a single word – it seems to me that the questions Shakespeare is asking in his play are the same one’s we are asking today.”

Rounding out the 2020 year will be the return of ASC’s beloved holiday tradition of A Christmas Carol, adapted by James McClure.

“2020 is a season that affirms ASC as Virginia’s premiere classical theatre and the jewel in the cultural crown of the Shenandoah Valley,” says managing director Amy Wratchford, “through the range of our offerings and the depth of our exploration we continue to make good on our promise to be a center for practice and scholarship worthy of the designation ‘Shakespeare’s American Home.’”

2020 Subscriptions are on sale now. Single tickets for the 2020 year go on sale November 1 – but get the best seats by purchasing your subscription today. Tickets to all 2019 productions are currently on sale as well. You can purchase tickets online at www.americanshakespearecenter.com or by calling 1.877.MUCH ADO.

Watch: Ethan McSweeny announces our 2020 titles in this special video. 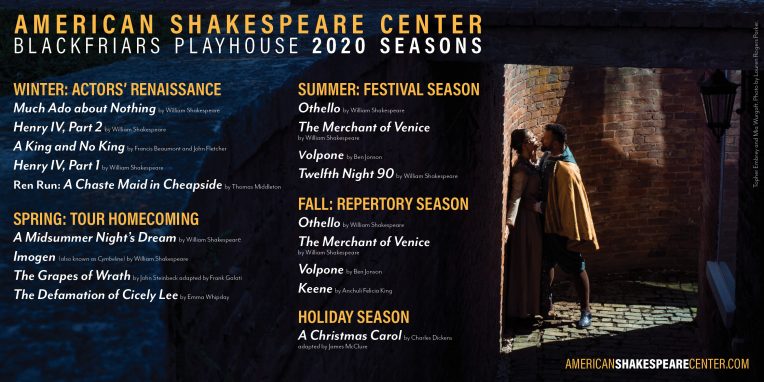