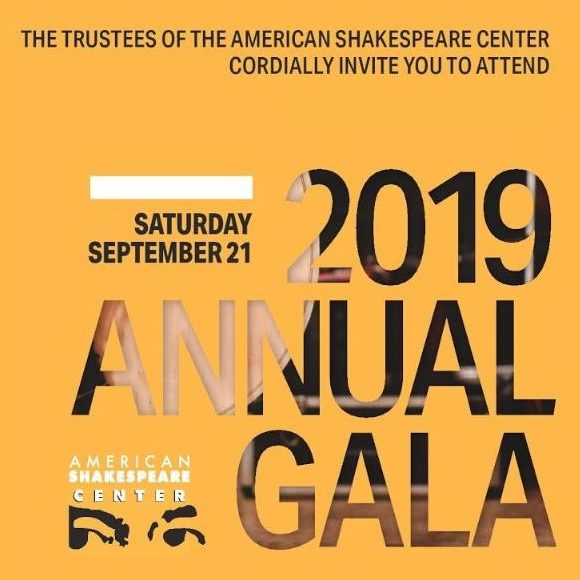 The American Shakespeare Center (ASC) will honor award-winning actors Paul Gross and Martha Burns alongside long-time regional arts supporters Chris and Betsy Little at its Annual Gala on September 21, 2019. The event will celebrate new artistic director Ethan McSweeny’s first season and feature both ASC’s resident company and touring troupe, as well as members of the world-class Heifetz Institute, in a special Gala performance at the company’s Blackfriars Playhouse, the world’s only recreation of Shakespeare’s indoor theatre.

A Burbage for “New Burbage”

Paul Gross and Martha Burns will receive the Burbage Award which annually honors theatre-makers whose work has made it possible for actors to perform and audiences to enjoy the plays of Shakespeare and his contemporaries. Gross and Burns’  portrayals of unstable artistic director Geoffrey Tennant and enduring diva Ellen Fanshaw in the beloved television comedy series Slings and Arrows gave viewers an inside look at the show-behind-the-show and created a deeper appreciation for the loving struggles it takes to make a play and run a theatre. With both irreverence and deep compassion for its subject matter, Slings and Arrows tells the story of a Shakespeare company beset by challenges, the fictional “New Burbage Festival,”  as it strives to strike a tenuous balance between art and commerce.

Widely regarded as two of the most versatile and talented Canadian actors of their generation, real-life couple Paul and Martha have created memorable roles both separately and together throughout North America, winning, between them, 12 Gemini Awards for television acting and writing and three Dora Mavor Moore Awards for excellence on the Canadian stage. Prior to sharing the screen in Slings and Arrows, Mr. Gross was best known for his turn in Paul Haggis’s series Due South, while Ms. Burns made her name on stage performing in the Stratford Festival, Shaw Festival, National Arts Centre, and Soulpepper Theatre Company, of which she is a founding member.

“The Burbage Award was begun at ASC in the wake of the 2008 recession to recognize the sometimes unsung heroes who have, quite literally, kept the lights on at important theatres the world over,” shares McSweeny, “What Paul and Martha created on screen in Slings and Arrows has potentially had an even bigger impact off-screen, inspiring a generation of artists and arts leaders to persevere in the face of the often seemingly insurmountable hurdles faced in the pursuit of art.  I speak from personal experience that in darker moments of doubt and despair, the truth, humor, and courage of the fictional New Burbage has served as both refuge and beacon in the real world. We owe Paul and Martha a Burbage for what Geoffrey and Ellen have given theatre-makers everywhere.”

No strangers to the ASC family, Chris and Betsy Little truly personify the rising tide that lifts all boats. Through their acts of volunteerism and philanthropy, they have been a vital force in creating a thriving cultural sector and building bridges for civic engagement. For their championship of our friends at the Heifetz Institute and the Staunton Music Festival, for their stewardship of the R.R. Smith Center and the Staunton Augusta Arts Center, and for their tireless, transformative support of the American Shakespeare Center, ASC is excited to recognize them with this honor.

“The Shenandoah Valley is in the midst of a cultural renaissance and Chris and Betsy Little are its quiet, dignified Medicis,” says ASC Co-Founder and Director of Mission Ralph Alan Cohen  “The way they have both seeded and then sustained the growth of our arts and cultural institutions has been visionary, and the creation of lasting legacy. We are all of us so thrilled to have them as members of our community and are looking forward to thanking them for their remarkable generosity.”

Named for James, the builder of the Globe and the Blackfriars, rather than for his son the actor Richard, the Burbage Award celebrates the work and sacrifice of colleagues who have managed year after year to keep their companies alive, their theatres open, their actors working, and their audiences enriched. The first recipient was Bill Patton, who for 50 years was the executive director of Oregon Shakespeare Festival. Other recipients have been Tina Packer of Shakespeare and Company, Fred Adams, founder of the Utah Shakespeare Festival, Tim Carroll then of London’s Globe and now of Canada’s Shaw Festival and, in 2018, Ty Jones who resuscitated and lead the Classical Theatre of Harlem as both artistic director and leading actor.

The Robin Goodfellow Award, so called after A Midsummer Night’s Dream’s “merry wanderer of the night,” is given annually since 1993 to those who have provided extraordinary service to the American Shakespeare Center. Chris and Betsy Little join company with Lee S. Cochran who led the fundraising effort to support the building of the Blackfriars Playhouse; Tom Cabe, one of the influencers who helped attract ASC to Staunton; and Barbara Mowat who, as the former director of education at the Folger, served as a friend and advisor to ASC for many years.

The celebration begins with a performance at the Blackfriars Playhouse at 6:00pm on Saturday, 9/21. Dinner and dancing will follow at the Stonewall Jackson Hotel. Single tickets are $275. Table sponsorships are $2,750 and include seating for eight guests and two ASC artists. Dress is cocktail attire. Tickets are available online on August 1st.