One month ago today, ASC lost its dear friend, Mr. Larry Hoover. We are proud to have known Larry and to have had him as a part of our history. in his honor, ASC co-founder and Director of Mission Dr. Ralph Alan Cohen has written the following tribute.

Good luck frequently comes down to the friends you have, and the American Shakespeare Center was at its luckiest in having had Larry Hoover as a friend in its formative years.  Larry joined the board soon after we incorporated as a non-profit while we were working out of an attic office in downtown Harrisonburg next door to his law firm of Hoover and Hoover (now Hoover-Penrod).

Larry, who had graduated with high honors from Hampton-Sydney and who earned his law degree at the University of Virginia, had the demeanor of an unassuming country lawyer. His down-home manner, wide reading, and integrity suited his physical resemblance to Abe Lincoln and in part explain the enormous amount of goodwill that Larry brought with him to the then Shenandoah Shakespeare Express and later to the project of moving to Staunton and building the Blackfriars Playhouse.

But beyond these personal attributes, Larry was a pioneer in the field of alternative dispute resolution—mediation—and his tireless work in that cause had a national and international impact on the practice of law, an impact that earned him a passel of awards and the soubriquet “father of mediation in Virginia.”  Much of that influence came from the way he inspired his students in his classes on mediation at Washington and Lee’s School of Law.  He was, though, a teacher to us all because his belief in resolving differences between two sides in a dispute came directly from his nature: you couldn’t leave a conversation with Larry Hoover without the conviction that he was the world’s greatest listener.  He made you want to be a great listener too.

A singer and musician, an amateur actor, a naturalist, a dandy bowtie tier, and an expert on baseball, Larry had a Renaissance appetite in his interests, and he had a Renaissance belief in mankind’s ability to overcome its challenges.  As one of his former law students said of him at his memorial service, “Larry danced on the curve of what is possible.”

The ASC was fortunate to have such a friend help make our dreams possible. 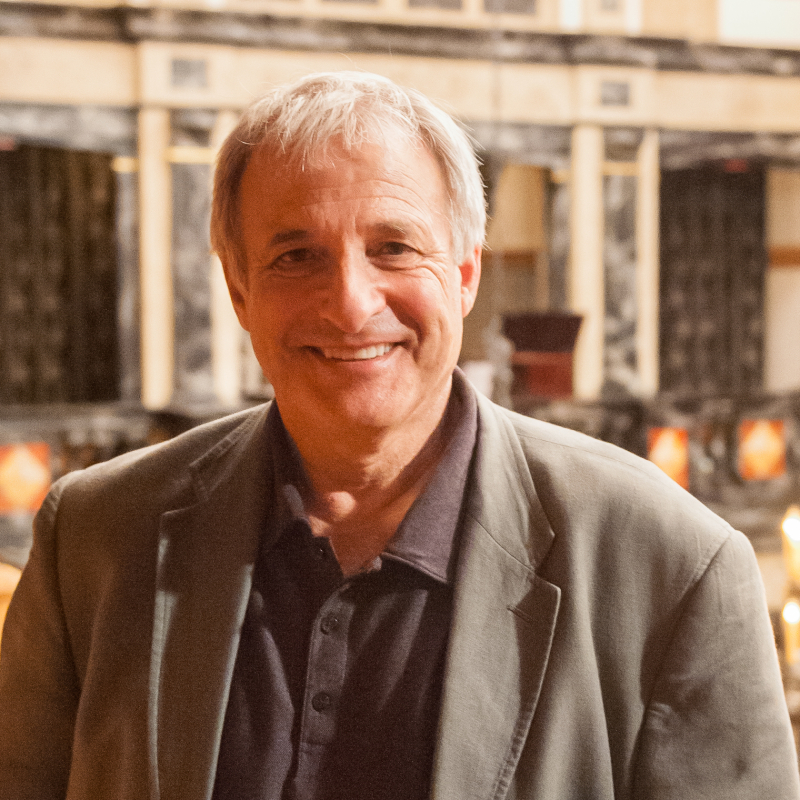 CO-FOUNDER AND DIRECTOR OF MISSION

Ralph is Co-Founder and Director of Mission of the ASC, Emeritus Professor of English at James Madison University, and currently Gonder Professor of Shakespeare at Mary Baldwin University, where he founded the graduate program in Shakespeare and Performance.
He was project director for the building of the Blackfriars Playhouse and has directed 30 productions of plays by Shakespeare and his contemporaries. He founded the Studies Abroad program at James Madison University, where he won Virginia’s award for outstanding faculty. He has directed four scholar summer institutes on Shakespeare and staging sponsored by the National Endowment for the Humanities. He is the author of ShakesFear and How to Cure It: The Complete Handbook for Teaching Shakespeare.
In 2001, he established the Blackfriars Conference. He has received numerous awards and fellowships including the Governor’s Arts Award with ASC Co- founder Jim Warren (2008), the Theo Crosby Fellowship at Shakespeare’s Globe in London (2009), the Folger Shakespeare Library’s Shakespeare Steward Award (2013), and the Globe’s Sam Wanamaker award — the first American to receive this honor (2014). He earned his undergraduate degree at Dartmouth College and his doctorate at Duke University, where he received the outstanding alumni award in 2016.