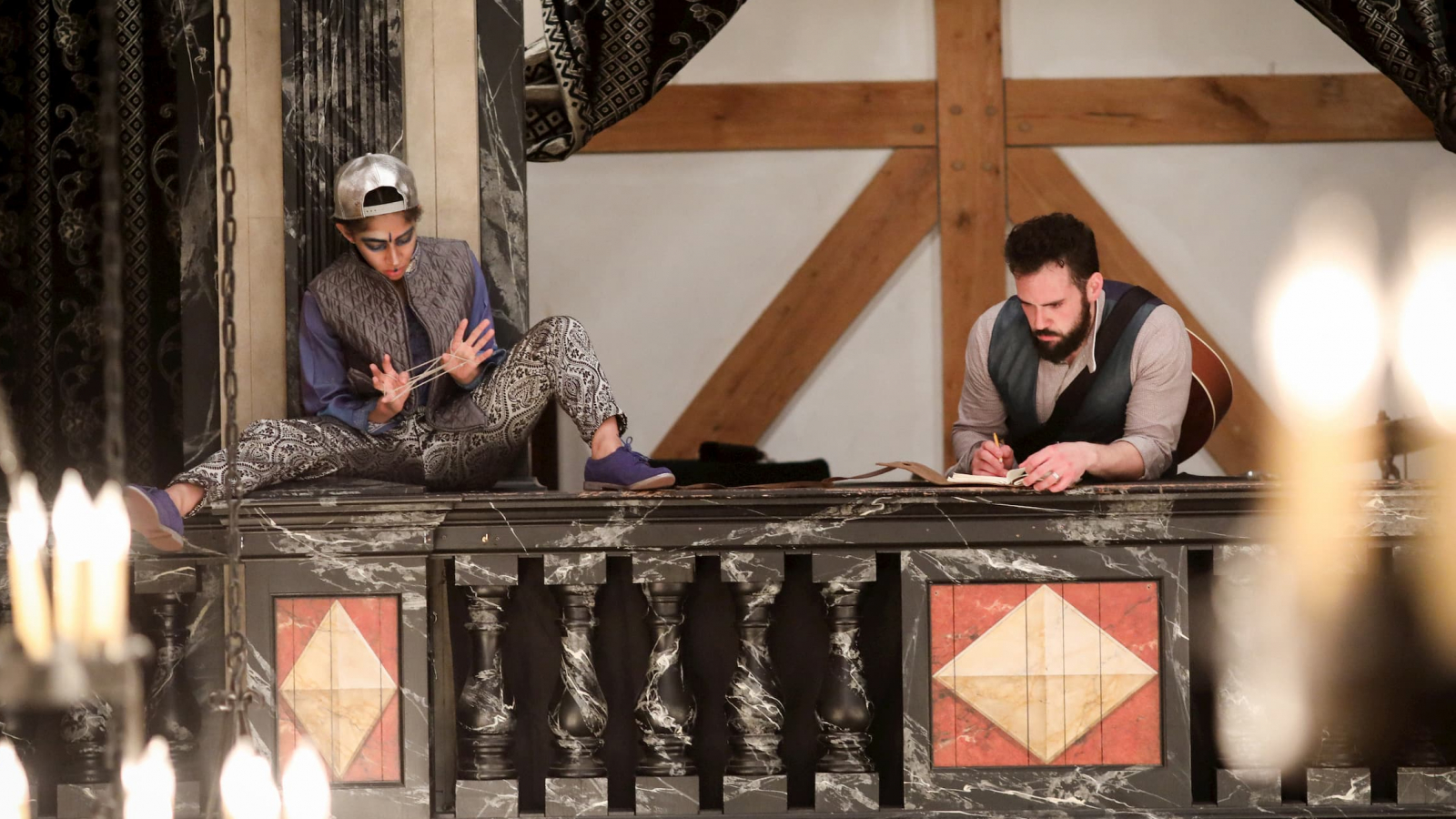 As a Shakespeare scholar and English nerd, I recently found myself wondering what “inspired by and in conversation with Shakespeare” might mean from the perspective of dialogue: as much as Renaissance theater was characterized by staging practices like universal lighting or repertory casting, it was also revolutionary for its daring approach to language. And while I am always eager to wax lyrical about why iambic pentameter is so compelling (more anon), contemporary writers have new tools to use in their experiments with spoken dialogue and its form on the page. Plays that take up Shakespeare’s legacy need not flawlessly imitate his style; they might instead carry forward a tradition of linguistic exploration and transformation.

Shakespeare did not so much refine long-established conventions of theatrical dialogue as help create a new dramatic vocabulary. When he started writing plays at the end of the 16th century, blank verse—those unrhymed iambic pentameter lines that now seem so unmistakably Elizabethan—had only just become the dominant form for drama in England. After Christopher Marlowe wrote several couplet-free crowd-pleasers in the 1580s, Shakespeare exploited blank verse’s tolerance for lexical and metrical variation in order to convey the spontaneous rhythms of actual speech. His poetry does not stop at the ends of lines but overruns its boundaries: Macbeth wonders “Will all great Neptune’s ocean wash this blood / Clean from my hand? No—this my hand will rather / The multitudinous seas incarnadine, / Making the green one red” (2.2.59-62). The metrical structure can organize elaborate sentences for a listening audience while the complex vocabulary and mid-line syntactical breaks capture the ebb and flow of Macbeth’s panicked thoughts. However lofty Shakespeare’s verse sounds to modern ears, it represents a kind of heightened naturalism.

Contemporary playwrights similarly explore structures that balance familiar and unfamiliar uses of language to create the experience of heightened stakes. Caryl Churchill breaks open the ordinary ways that people talk over and around one another; her innovative (and now widely used) way of indicating overlapping dialogue—with a forward slash—both unleashes and organizes the cadences of multiple voices. Or Suzan-Lori Parks, in a play like Topdog/Underdog, contrasts colloquial vocabulary and grammatical parallelism to highlight divisions that run just beneath the surface of otherwise close relationships: “Thats soup and thats sauce. I got you the meat and I got me the skrimps” (1.1.14). The language is metrical and theatrical—and it isn’t Shakespeare’s blank verse.

Suzan-Lori Parks’s work further reveals how contemporary plays also respond to production conditions and typographical technologies that Shakespeare didn’t have. Shakespeare’s blank verse orchestrates actors who only received cue scripts and guides onstage action in the absence of extended rehearsal time. Parks, in turn, peppers her scripts with invented noises (“Hhh!”), sequences of dashes, “rests,” and “spells” (in which characters’ names follow one another without dialogue) that would have made little sense in an Elizabethan production context. The visual cues that suffuse Parks’s plays bear fruit through experimentation in the rehearsal room; they ask the creative team to respond to the work as a musical score whose rhythm is uncovered over time.

The soundscape of contemporary drama has been markedly affected by mechanized typing and cheap printing. Sarah DeLappe, to create the short, percussive phrasing and simultaneous conversations that evoke the patterns of teenage speech in The Wolves, takes full advantage of all the white space that can be left on a page: columns of indented dialogue denote conversations’ multiple threads, and liberal line breaks punctuate the characters’ sentences. Modern printing has not only encouraged writers to wrestle with cacophony; it has empowered them to use silence in new ways. Where Shakespeare reserves dumb shows (and the long stage directions that describe them) for moments of elaborate pageantry, Annie Baker curates the mundane. In The Flick, frequent quiet moments set naturalistic vignettes against dramatic artifice: “Sam and Avery gaze up at the projection booth while Rose moves around, then disappears from view. Avery goes back to sweeping. Sam keeps watching the window as if he hopes she might appear again. This goes on for about ten seconds, then: Blackout.” Silence as much as speech sculpts the theatrical world and offers space for everyday gestures to become heightened narrative events.

In all of these ways (and in many more), contemporary writers expand our sense of how the human voice and its absence can create an immersive fictional world for an audience. Shakespeare did the same. Shakespeare’s New Contemporaries is an opportunity for today’s playwrights to remember Shakespeare as an author who extended, repurposed, and reimagined the tools of his time–and it is a chance for writers to attempt that same transformation of theatrical language in their own work.