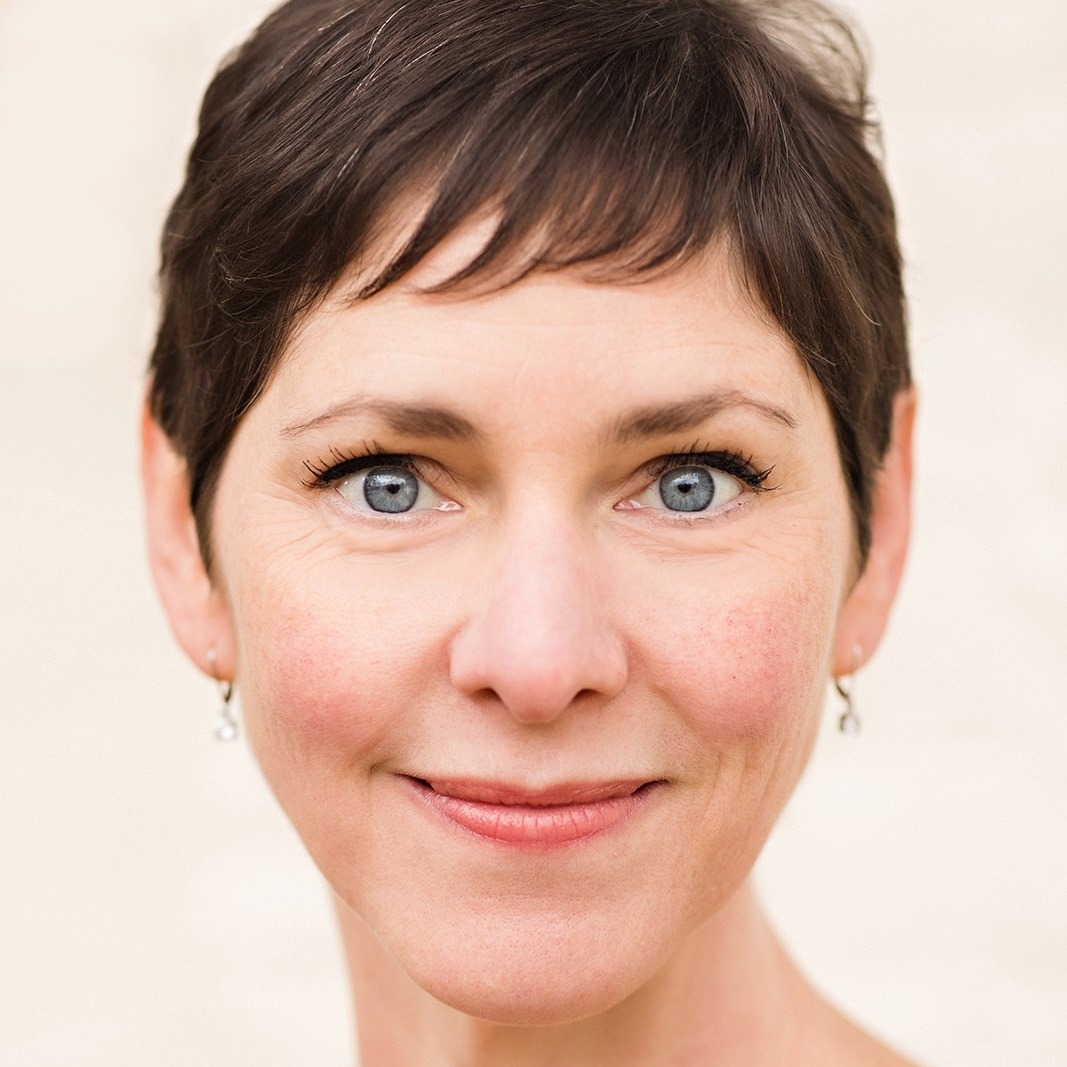 If you’ve been following ASC for awhile, odds are you know Sarah Enloe. As Director of Education here at ASC, Sarah is responsible for our programming in the areas of College Prep, Research and Scholarship, Life-long Learning, and Educator Resources. She’s passionate about making Shakespeare accessible to all audiences, and she’s spearheaded so much of the educational work we do here at ASC.

In addition to her work for ASC, Sarah recently became President of the Shakespeare Theatre Association, which provides a forum for theatre leaders across the country to discuss performance methods and educational resources. To celebrate her achievement, we sat down with Sarah and discussed her career trajectory, what she’s learned from the past year’s pandemic and social justice movements, and her plans for her presidency.

Tell us a little bit about yourself: where you’re from and how you came to ASC and STA.

I grew up in Texas, and I am the daughter of two school teachers, so it’s not very difficult to imagine that I would go down that path as well. I got my degree in teaching theatre from the University of Texas at Austin, and I got a job at Manor High School, which is just outside of Austin. In my third year there I applied to get a NEH grant and go to Shakespeare & Company in Lennox, MA.

While I was there, they had a substitute lecturer and his name was Ralph Alan Cohen. He came in all blazing like a Southern Baptist preacher, only his topic was Shakespeare and not Jesus. I remember the first lecture that he gave, he was just throwing out so much information and I was writing like mad. The next year I went to visit my cousin, and I drove down to Staunton and I could not believe how beautiful Virginia was and then I couldn’t believe how adorable Staunton was. So I applied to come study here and I moved here in 2005.

I wanted to get my M.F.A so I could teach teachers because we just don’t get the support and training pedagogically that would be helpful to keep us going. I did my course work, became Professor Cohen’s assistant, and helped run the ASC Theatre Camp in 2006. Then I ran the Blackfriars Conference in 2007.

In 2009, I moved into the Director of Education position. And that was also when I started attending the Shakespeare Theatre Association Conference. Then, a couple years ago, the STA said, “Hey, would you mind being the Vice President into the Presidency, because we need an educator?” We try to balance our Executive Committee so that it represents educators, artists, and managers, and that means we have diverse voices.

When I was asked to take the Vice Presidency into the Presidency, I said I would only do it if we could bring in new theatres who hadn’t been interacting with us and new BIPOC representation onto the Executive Committee. This year we had two black representatives and one Asian representative out of seven members, so I’m pretty pleased with how that is going so far and with the open communication we are having with the entire conference about that objective.

How did the pandemic change your approach to theatre education?

Our approach at ASC is to transfer ownership of the text from the ivory towers of academia to the students’ hands. We do that by thinking about what actors would have known and showing the students, with brief training, how to dig into the texts on their own so that they can reveal what it is that might make performance choices visible to them.

As we moved into the pandemic style of teaching, we talked in the Education department about what it is that we most need to convey and then we devised methods for relaying that information. What we’ve found is that we can still reveal the choices available in the texts through interactive and interesting programming that uses the tools that Zoom offers us like annotating, which is something we couldn’t do before. We’ve also been able to successfully do breakout rooms, and these have been really fun when we do our cue script workshops. We have also furthered our work in a storytelling module that was in development before the pandemic and we fleshed it out for our partner, International Paper.

What we did for our summer camp is we made the rule that whatever you do for your performance, it can’t be a Zoom meeting. We ended up with a brilliant All’s Well That Ends Well that engages all of the social media platforms to tell a gossipy and enlightening story. And we had a production of Julius Caesar in which the students brilliantly made the soothsayer the documentarian of the events surrounding Caesar’s assassination. So we had two really great takes that were not just boxes on a screen. This summer we’ll be together in-person as we will have a modified ASC Theatre Camp where we have 12-15 campers in their own bubble and they, like our actors, will be using the method that Shakespeare’s actors used to produce a production of Henry V themselves.

In June, the STA released a statement regarding systemic racism following the murder of George Floyd. And as we’re talking, this country is still reeling from the devastating events in Atlanta which killed 6 Asian women. What can theatre do in the wake of such events?

What we’ve got with Shakespeare is an old white guy, but we can give voice to other artists as we use the clout of Shakespeare to bring audiences into the conversation. I think we have to center our BIPOC members and make certain their voices are heard and welcomed, and the same thing goes for inside our individual theatres. The #WeSeeYou document gives us some very specific ideas for how we can do that. You’ll notice in the casting for the Actors’ Renaissance Summer season, the Actor-Managers and Jay McClure have cast a lovely array of voices that are going to enhance our understanding of what we can do in this world to promote those conversations.

That said, I think Shakespeare gives us a space to explore the best and the worst of the human experience and therefore talk about it. If we don’t put shows that are difficult onstage, then we allow silence to fester ill will. And I think that’s the biggest challenge we face, the non-conversation. That’s our immediate responsibility, not to choose the soft balls but the difficult and challenging ones, so that we can promote conversation about the things we need to talk about in order to move forward past George Floyd and the horrific killings that happened last week [in Atlanta and Colorado]. I am hopeful that as we come out of the pandemic, what we can do at our Blackfriars Conference and at our plays, is have those conversations that will allow us to embrace the path moving forward that we clearly need to be on.

I’m sure I’m not the only one who’s waiting for the theatre world to “return to normal.” But the theme for the 2022 STA conference, “Reinvention,” is all about embracing change — moving forward instead of looking back. How can we continue to innovate and adapt to our new way of life while holding on to what makes theatre, theatre?

One thing I’ve heard from every theatre that I’ve talked to is that we have reached audiences we might not have seen before, because we aren’t in a building. We’ve all realized that this [pandemic] has expanded our accessibility in ways that we want to hold on to. And then there is the reinvention that we have the opportunity to do now with thinking about who we’re engaging in our community and how we’re doing that. We’re going to be sending a request for assistance to the Monacan and Manahoac peoples to help us draft a land acknowledgement statement that is what they would like to see, because it is their land that our theatre is seated on. We’re also reaching out and thinking about ways for our theatre to become a more dynamic part of our community by opening it up to groups who need a space and engaging with our friends at Building Bridges. We’re also looking into ways to investigate the black experience in Staunton and make that a dynamic and living exchange on our website, so that when people come to see plays here in Staunton, they are also experiencing what our town has done historically and how we can move forward from there.

So I think that reinventing is two-pronged. It’s the slamming of the brakes that happened last March that forced us all to do and think about things in new ways, and it’s the acceleration that happened in May with the murders of Breonna Taylor, Ahmaud Arbery, and George Floyd, and not letting things go back to normal. We reinvent who we are as a two-pronged path because we have both had this stillness to see and the acceleration to do.

What are you proud to have accomplished so far as President of the STA, and what are you looking forward to in the future?

The organization under my leadership has done a few things that I’m really proud of, and one of those is that we’ve expanded our conversations to arenas beyond just the annual conference. It used to be that we would get together in January and then not talk to each other until the following January. Now, we’re definitely supporting each other more robustly throughout the year. We learned from having a remote conference that we can engage with more of the members’ staff than we had previously. Usually, when we have a conference in-person, theatres can only afford to send so many people. But with the ability to go virtual for a part of it, we are totally able to welcome more junior members of our group, which means that we can see and support their growth as they move up into different positions in the theatres that they are in, so I am excited we will continue to offer some aspect of our conference in a virtual way and make sure it is available for those members.

We’re also expanding our diversity. For our conference this year, which we held virtually, we were able to give forty-five scholarships to emerging leaders of color. We are going to continue to schedule our conference with the deep engagement of the IDEA (Inclusion, Diversity, Equity, and Accessibility) committee members so that we can always have a finger on the pulse of what the needs of our BIPOC folx are and be able to respond to it in ways that are really helpful and not blind. I think we really have to make them part of the planning and presenting, and that’s going to be an exciting thing to see as we move forward through 2022.

Like this post? Let us know by sharing it on social media! AND don’t forget — tickets are now on sale for our Actors’ Renaissance Summer season. Check out our website for more information.