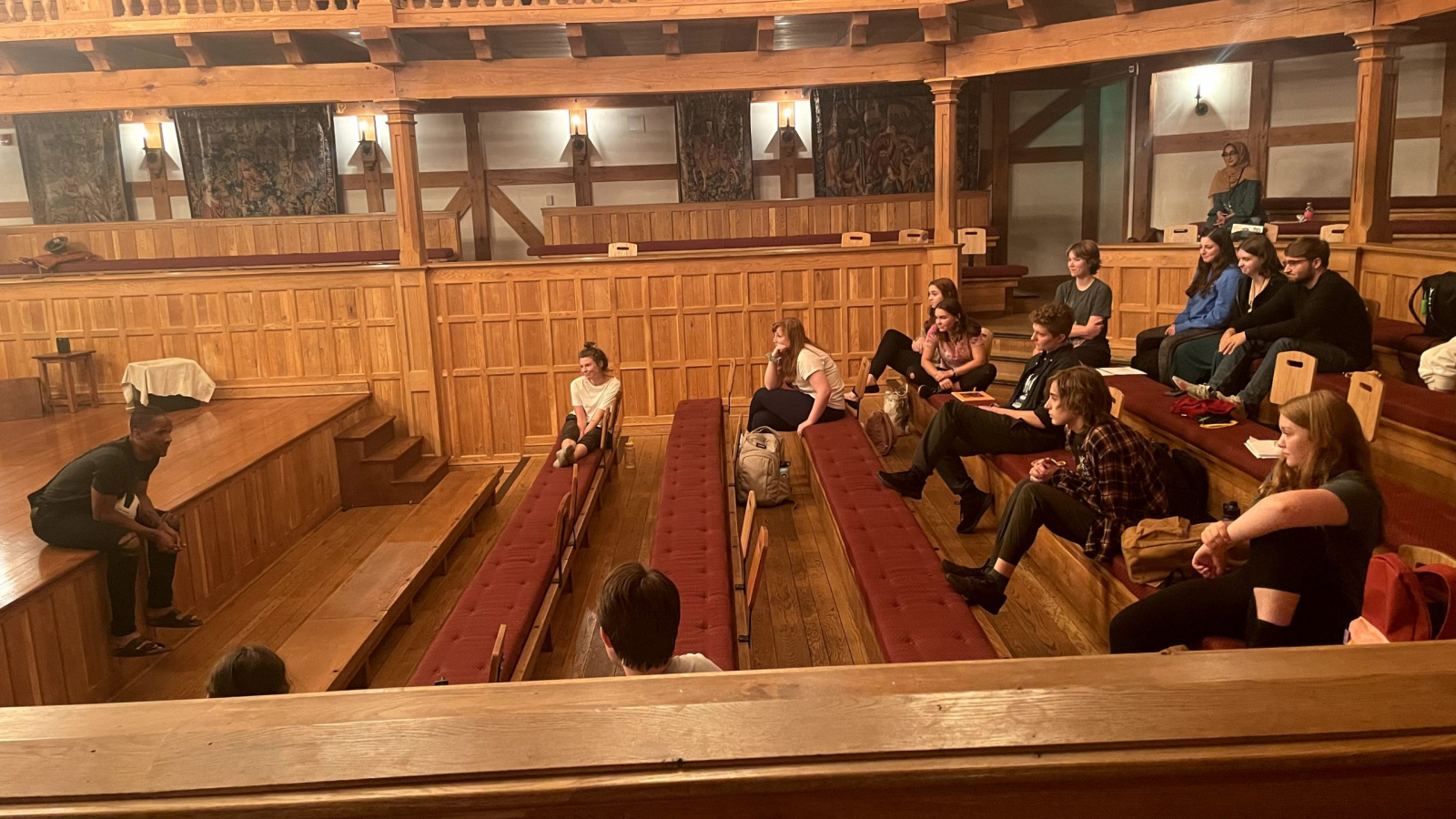 Welcome to the Camper Play Review, where an ASC Theatre Camper reviews the current productions running at the American Shakespeare Center. In this installment, Lilly Day-Miller shares her thoughts about the 2021 Actors’ Renaissance Summer production of Henry V.

Lilly’s summary of the play: The play begins with Henry deciding to invade France and come for its throne, after receiving a mocking gift from the Dauphin. The audience gets to have a brief glimpse of how the Eastcheap crew is handling being shunned by the king, and learn of the death of the King’s former friend Falstaff. The play quickly shifts to the war in France with the pinnacle of the war being the Battle of Agincourt, at which the English are outnumbered. After a very taxing and lengthy battle, the English win the war. Eventually, peace negotiations are finalized, including the marriage of Henry to Katherine, the daughter of the French king. Their marriage briefly unites the two kingdoms, with their son becoming Henry VI.

Lilly’s production commentary: A standout moment in the play was Act 1, Scene 2, when the audience first sees the tennis balls sent by the French Dauphin as a mocking gift to King Henry V. Brandon Carter, who plays Henry, used the tennis balls in his speech as an auditory aid. Every time he repeated the word “mock,” Carter would throw the ball up and let it smack back into his palm, mimicking the noise a tennis ball makes when hit across a tennis court. This seemingly small choice turns the immature joke from France into a threat that England from England, and proves that Henry in Henry V is ready and willing to become the king his country needs. Another interesting choice was Carter’s decision to include the King’s scar, which Henry received in the fight with Hotspur in Henry IV, Part 1 (before being crowned King). Attention to detail proves that the company is dedicated to portraying an accurate and intricate story.

Lilly’s review: The first death of the play is Sir John Falstaff, a former friend of the king, who was banished in Henry IV, Part 2 and never appears on stage in Henry V (we hear about his death from the Hostess, Mistress Quickly). The last death of the play is the Hostess herself, another former friend of Henry’s who he has tried to forget after being crowned King, and who also dies offstage (we hear about her death from Pistol). This stood out to me because Carter’s Henry shows little attention to this fact. The relationships and connections King Henry has in Henry V are more motivated by power and not by emotional gain, and I feel that the ASC production of Henry V does an amazing job of portraying this.

Every single performer in the ASC troupe has something incredibly unique and fresh to bring to every performance, and if I was allowed, I would write about each performer for many pages. Zoe Speas, in particular, showed incredible character differentiation as they glided from character to character. Speas has the task of playing five different characters in this play, and does so incredibly. The vocal, physical, and emotional changes for each character are miraculous to watch — like, for example, when Speas goes from the Chorus (portrayed as a fangirl) to Hostess Nell Quickly (who experiences tremendous loss in this play). As Chorus, Speas gets the audience so excited for the play that we are on the edge of our seats; as Quickly, Speas breaks our hearts when delivering the news of Falstaff’s death. The ease she has when changing characters is mind-boggling, and makes the audience even more enthralled in the show.

Bottom line: The ASC production of Henry V offers its audience a break from reality and a glimpse into a witty, provocative, and astute world that one can’t help but fall in love with.