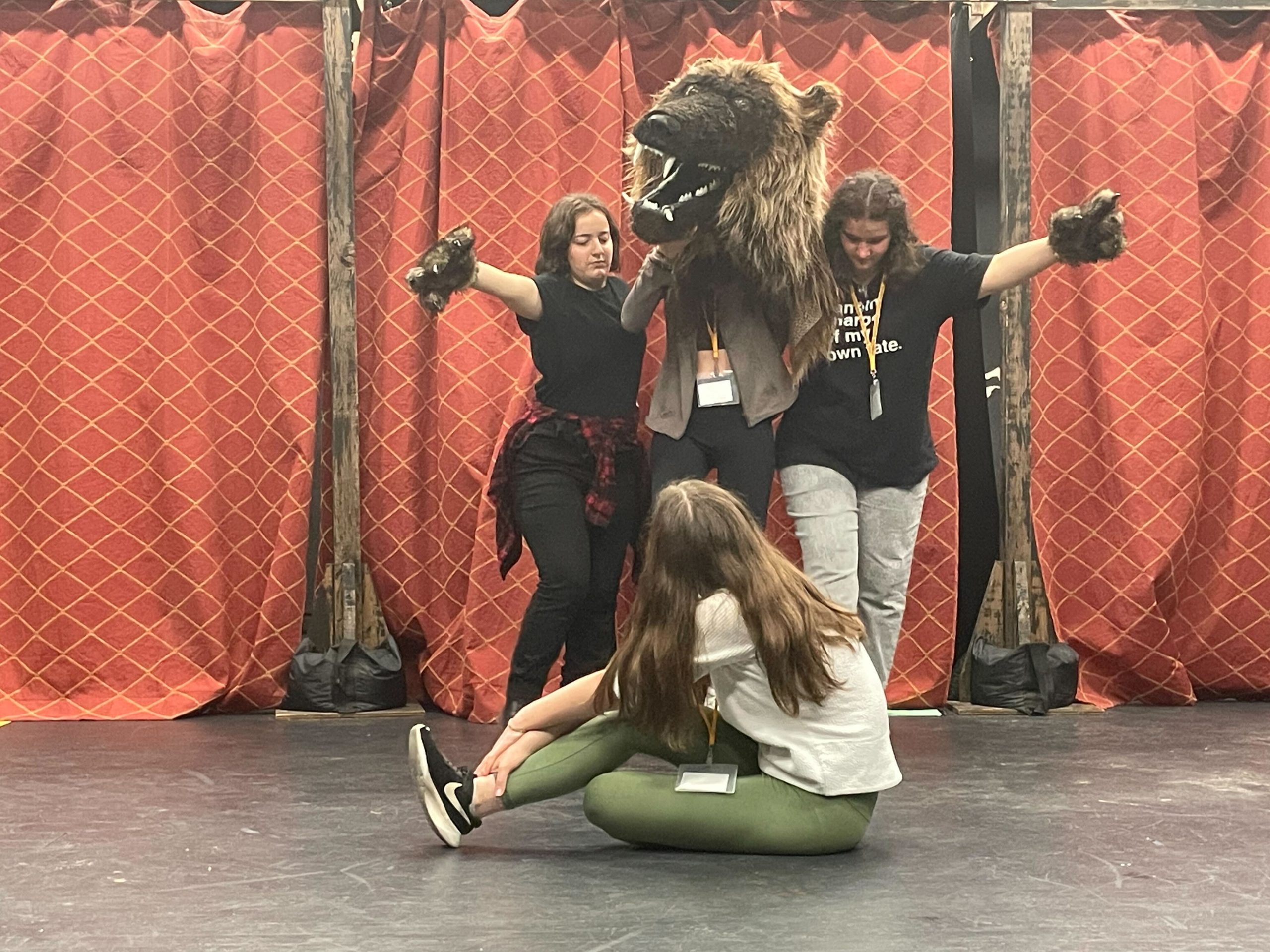 Zipping back into rehearsal with zip zap zop, the campers are warmed up. We also had a lot of great conversation about role and how best everyone can serve the story. Because the campers are about to work scenes more specifically rather than blocking, they took more time at the beginning to do theatrical exercises to work on their intention and their cohesiveness as an ensemble. After all that, Dave and the campers began to work the bear. In our production the bear is being concurred by Team Envy, and so Corrine, Desi, and Sophia took the bear head and paws, and constructed their truly terrifying and beautiful bear. This took some time but the shape they made was absolutely worth it. Once the bear had been summoned like some Mary Shelley esque horror of great preport, the campers worked on the song again. We slowly moved through Dave’s piano recording and started to assign musical instruments, there is still much work to be done but we are on the path! Then we had a BREAK. We now are moving through the play again, but rather than blocking, we’re doing scene work. So, we started at the start with the Induction. Introductions are always difficult, but also extremely engaging. How do you introduce yourself? Does it change depending on who you’re introducing yourself to? Why? All fun questions. Then the Anselmo Mucedorus balcony scene was looked over, and then the Mouse entrance. Finally the the first Segasto scene where he abandons Amadine. Scene work Scene work Scene work. See you all in this crazy bear play again soon!

The pantomimes in the show are incredibly important to tell the story non verbally. Mucedorus as a play is quite short, and a lot of the major moments are only mentioned once. Thus, the pantomimes that Dave has added in serve as both support for the framing device of Team Comedy and Team Envy, but also as a way to remind the audience of the previous action in an extremely entertaining way. It’s also FUNNY! They’re funny! I myself don’t have very much comedic experience, but being on this production and watching Dave work with the campers, I have come to appreciate comedy much more. A laugh is a powerful thing and is one of the most versatile and essential tools in any production. I’m excited to learn more about comedy as an ever present force rather than something that can be added or taken away, and this play has been quite eye opening in that regard. Mayhaps next rehearsal I shall learn a thing or two about envy.