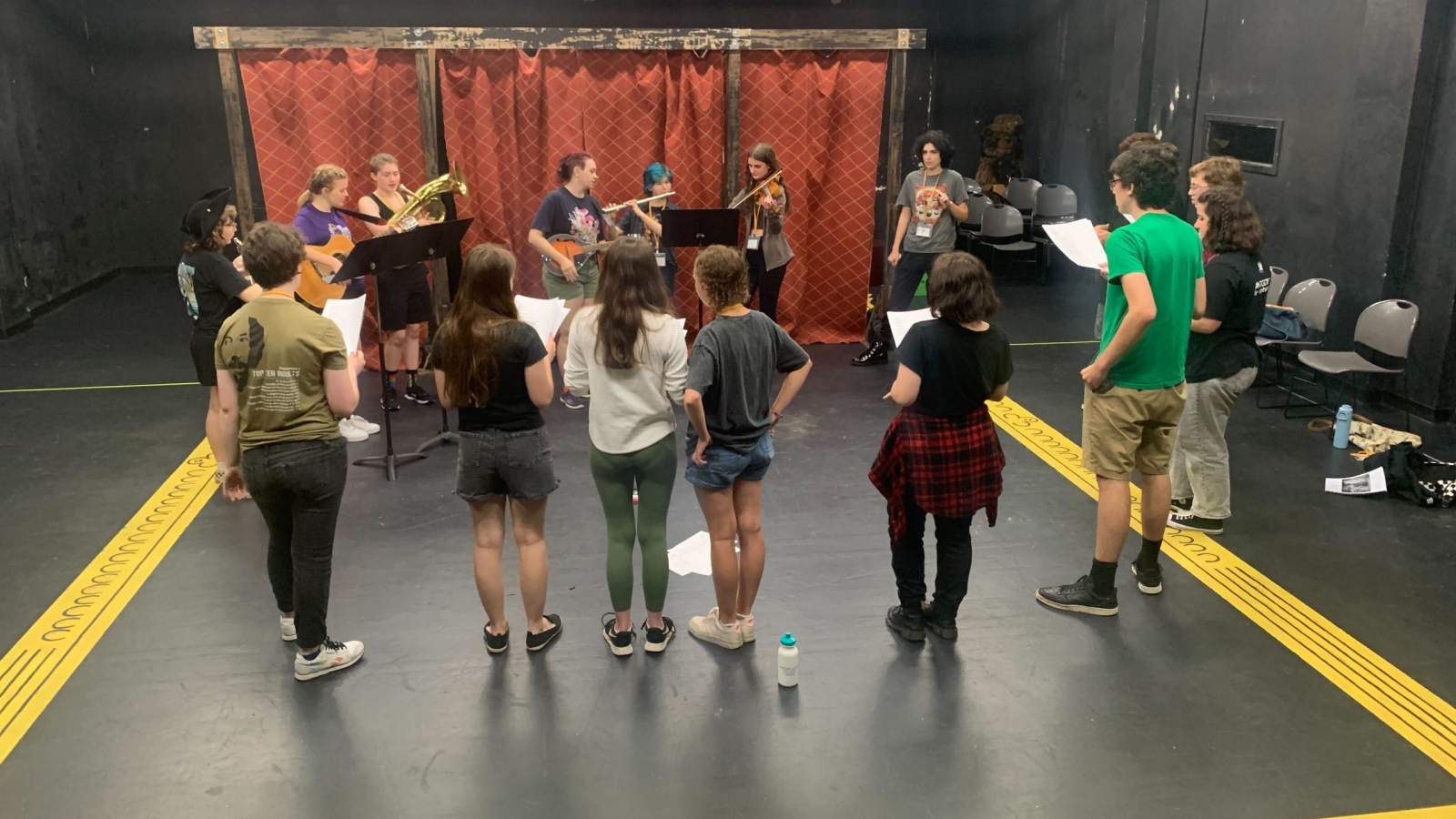 This music rehearsal was our first working on our show song. Director KP wanted a song about the pure joy of being in love, which would make the full pivot of Leontes all the more shocking. The choice of song was put to a vote, and the cast selected “Nancy Mulligan” by Ed Sheeran, inspired by KP’s vision and the Irish music theme in the sheep shearing. Campers who played instruments grouped together throughout the first two floors of the building, and the vocalists stayed in the black box space. Camper Desi took particular initiative in leading vocal rehearsal. When there were about 20 minutes left before our break, we reconvened and played through the song! As the intern in charge of music for The Winter’s Tale, I am incredibly impressed with how much progress they made in just over an hour.

The second half of rehearsal consisted of a fascinating exercise led by KP. Two brave campers, Hank and Natalie, were exiled to the lobby while everyone else were briefed on the exercise; when Hank and Natalie returned to the room, they would be prompted to improvise a story. Everyone made 5 columns on their paper, one for each of the senses, and kept track of how many times each was described by the storytellers. Hank was asked to describe the time he kicked the winning goal at the World Cup (Hank, of the Catalonian team, wound up rescued from the other team’s wrath by Batman, with whom he crashed for the next few months until Batman kicked him out). Natalie was asked about when she beat Beyoncé at a dance battle (the event took place when she was six, and after her superior moves were discovered, had to enter Witness Protection because her extraordinary abilities made her a target of the Mafia). After the game was explained to everyone, River told us about singing at the Met Opera (even via Zoom from the hospital after a vocal injury!). The campers learned about how Shakespeare describes multiple senses, and that’s part of what makes the language so beautiful.

Something else we learned in KP’s storytelling exercise was how reluctant we are, as humans, to talk about ourselves. The campers were all asked about incredible things that they had accomplished (hypothetically, I grant, but the point stands), and they glossed over their own greatness as much as they could, in favor of talking about what happened after. We want the campers to know that as an audience, and as people, we want to hear their stories! Hopefully, this was strengthened by the talkback after Twelfth Night—the actors described how they tell their personal stories through Shakespeare’s work, and it seemed to resonate. But never say that I am diminishing the value of teamwork! Our music rehearsal proved that these campers are an incredible united force; the song they chose is deceptively complex (you can listen to it here, or wait to hear the campers do it during our festival!), and yet, they threw themselves wholeheartedly into it. I can’t wait to have another music rehearsal Saturday morning.

Thanks for reading, and please enjoy some bonus photos that were too good not to share!