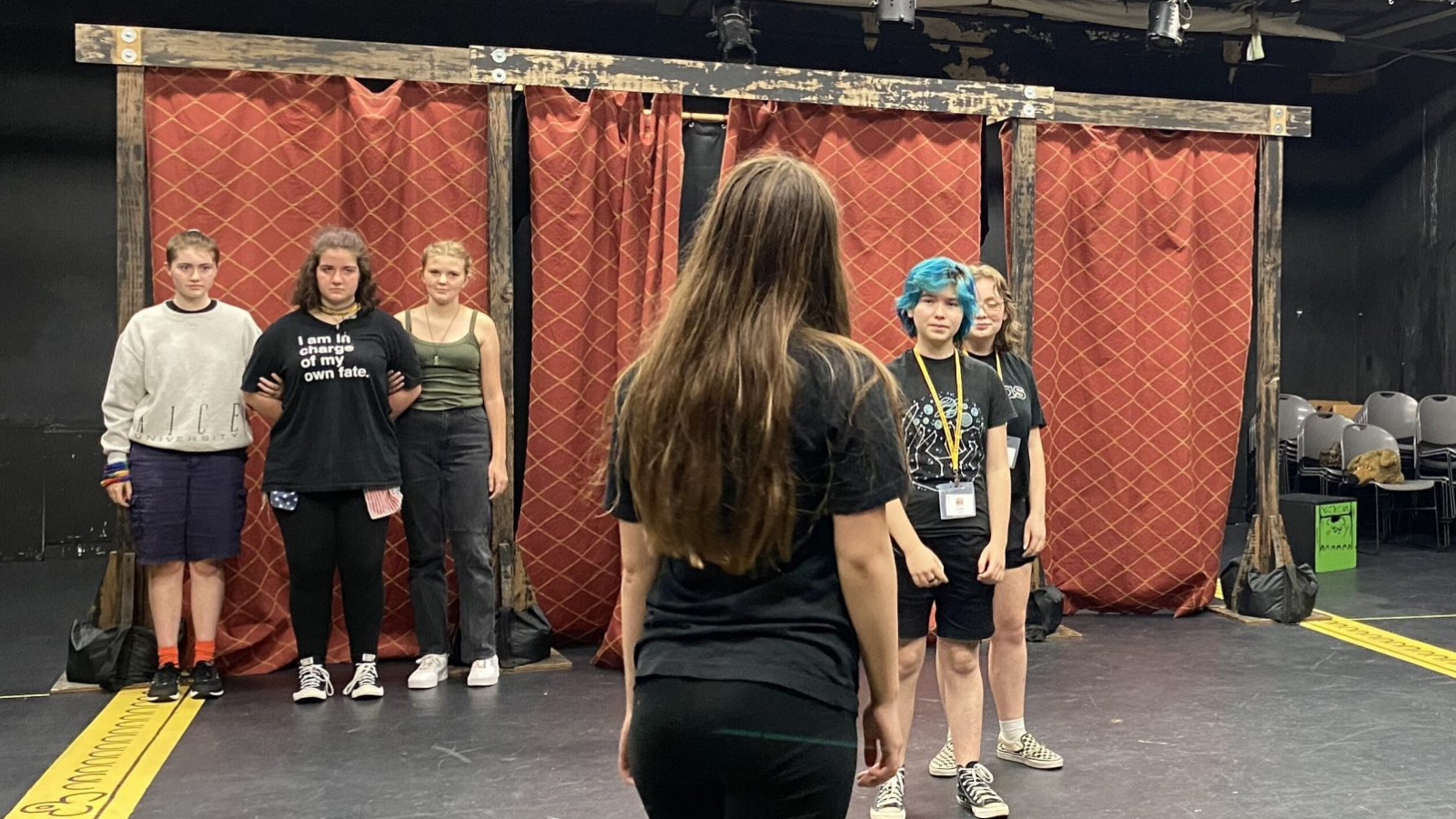 Zip zap zop spurred us forth into our activities of the day. The campers yet again played the versions where they paused to make statues with their bodies which meaning was narrated by their peers when called upon by Dave. It leads to a lot of creativity and warming up of choice making. The first item on the agenda was music work again. Many of the campers are very musically talented, playing things from the guitar to the violin to the euphonium. The campers sang along to the song various times, and then we split to work some parts of the song separately, and others ran lines. Working the song again took some time, then we had a BREAK. After break, we picked up with scene work for I iv. The bear pantomime is as stunning as ever. Then came II i and we got to revisit the Aragonian court and we were all again charmed by the King (Esme) and wildly entertained by the captive Prince (Corinne) and their captors (Mayela and Phoenix). Yet another pantomime followed, underscored by Sophia’s lovely piano, and we get to see the King of Valencia (Donovan) in distress in his home court speaking with Anselmo (River) about the location of his missing son. Then we see the scheming Segasto (Natalie) watch Amadine (Maggie) be courted by Mucedorus (JD/Froggy), which leads us into II ii, where we yet again encounter the assassin Tremelio (Hudson). We also got to run the Tremelio fight which is always so so very fun. Bremo monologue again! Always a treat. We visit the court again again in II iv, where Amadine bursts in with the decapitated bear head as proof of Mucedorus’ valor. Then the news of banishment is delivered by the most wonderful of wonderful messengers, played by the effervescent Corinne and our beloved clown Mouse (Archer). We thank them both immensely for the laughs. We ended in III iii with Bremo (Hank) and Amadine. We’ll see you next time in the Blackfriar’s playhouse for our stumble through!

Scene work is one of my favorite things about rehearsing a play. Now that the scene has a shape, you get to really dive into the meat of the words and the world of the play. It’s always a wonderful time to see choices the campers made with scripts in their hands come to life when their hands are free. They have a LOT of text to memorize, but they’re doing a wonderful job of putting the words on their feet. The pantomimes as well are well remembered and the story is stitching itself together. That’s another thing that I love about scene work, the way it helps to stitch the play together, making sure that it’s not just that every moment is great, but that the connections between each great moment make sense and follow one after the other in both logic and narrative payoff. If blocking scenes are puzzles, then scene work and full runs are quilting. I apologize for the amount of metaphor, I cannot help myself.