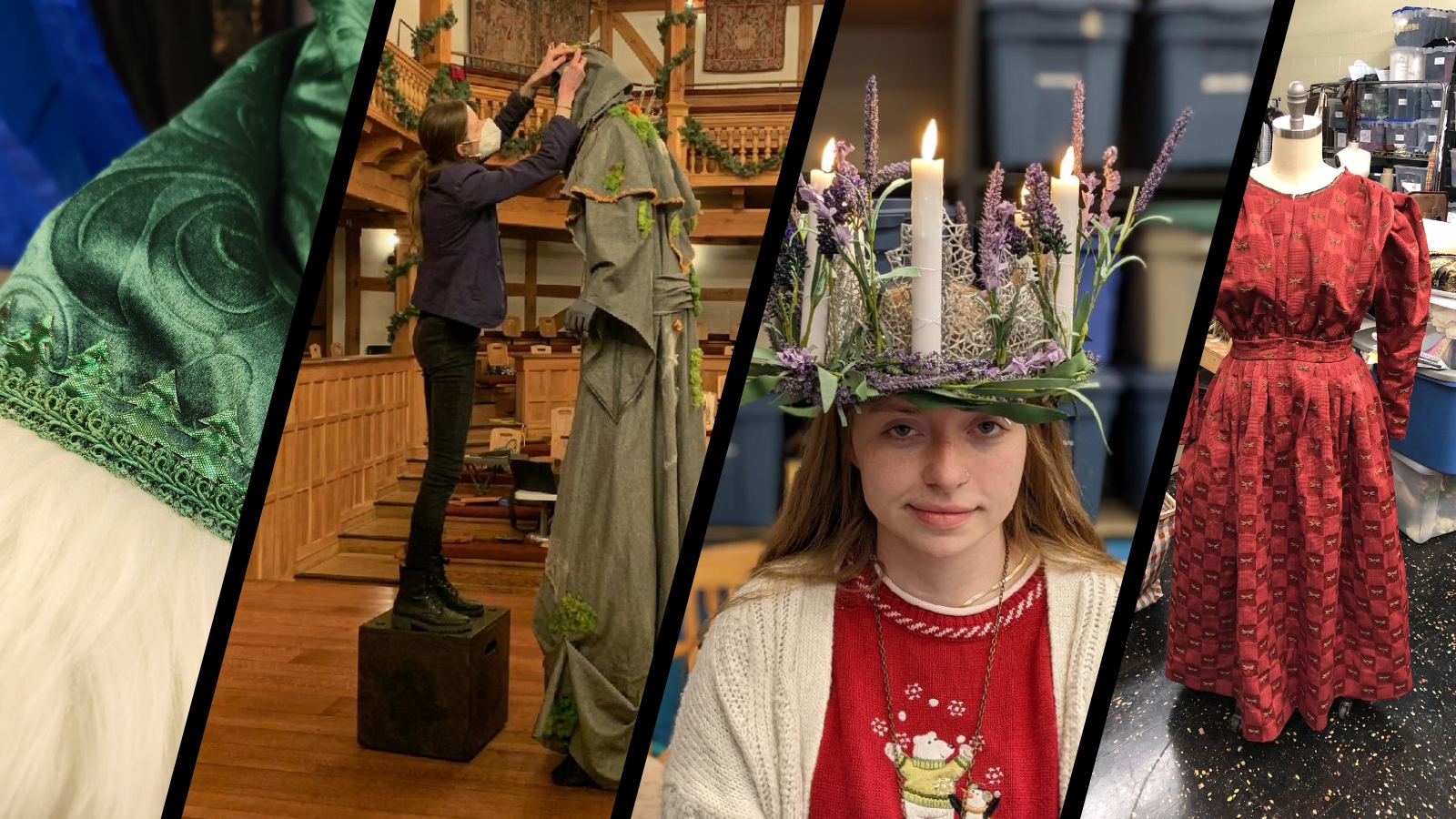 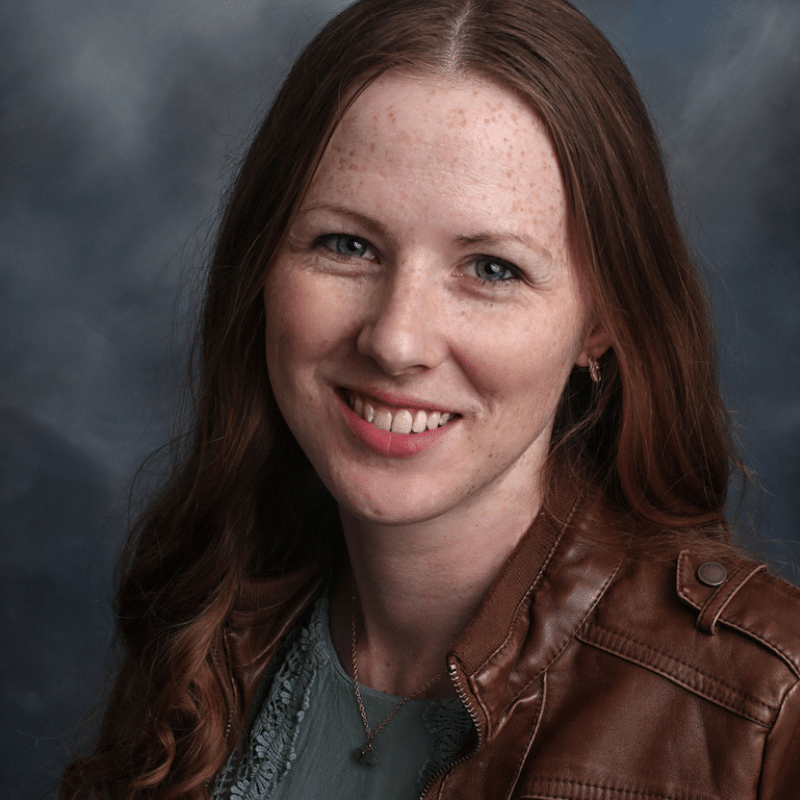 Hello, my name is Hope Maddox, I am the Costume Designer for this year’s A Christmas Carol, but you might have also seen my previous design work in Romeo and Juliet this past spring, The Ghost of Christmas Yet to Come in A Christmas Carol 2019, and many seasons as the Costume Shop Manager from 2018-2020. I currently work as the Costume Shop Supervisor and Resident Designer at Randolph College where I teach Costume Design and Technology. I was lucky enough to have an amazing team working on the show with me this year. My Assistant Costume Designer was the ever-talented Savannah Bower, who built The Ghost of Christmas Past alongside her students at the University of Lynchburg, including Regan Weeks who worked on Mrs. Fred’s costume, and Kaitlyn Langford who worked on Scrooge’s vest. 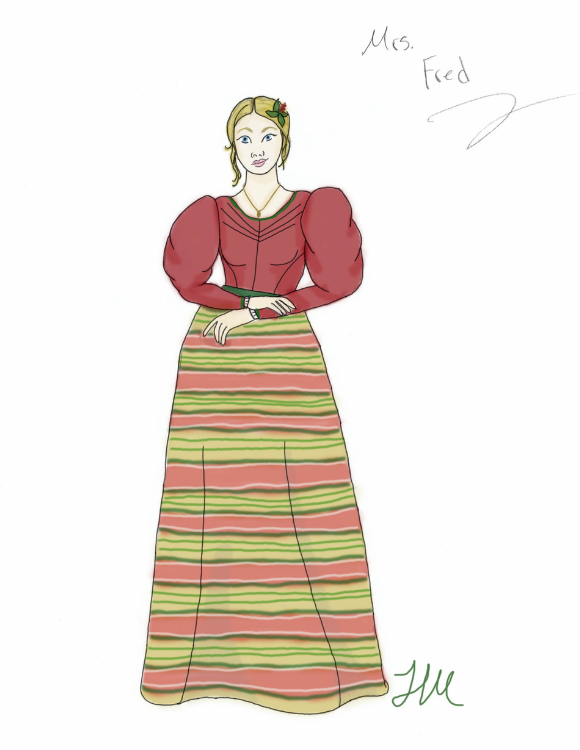 My team also included some of my students from Randolph College: Lily, Savannah, Erin, Alissa, Harper, Tanner, Kyra, Penny, and Mitchell who assisted me in building both The Ghost of Christmas Present and The Ghost of Christmas Future. Lily also built Belle’s white gown. Marie Lupia, the ASC Interim Costume Shop Manager, draped and patterned the gown for Mrs. Cratchit along with Tori Wright, ASC’s First Hand and Wardrobe Manager, who also made all of the Fezziwig party headbands. (Read more about my team in the show’s digital program!)

With this being my third holiday season at ASC, I wanted to honor the traditions of past Carols while also finding opportunities to create some new and exciting costumes for our audiences to enjoy. One of the things I felt very strongly about was setting the present day of Scrooge in the 1840s when the original book was published. I wanted there to be an obvious difference between his present day and future versus the past so that we could see his history in almost a “rose-colored glasses” way–the way that people always want to look back on their past. 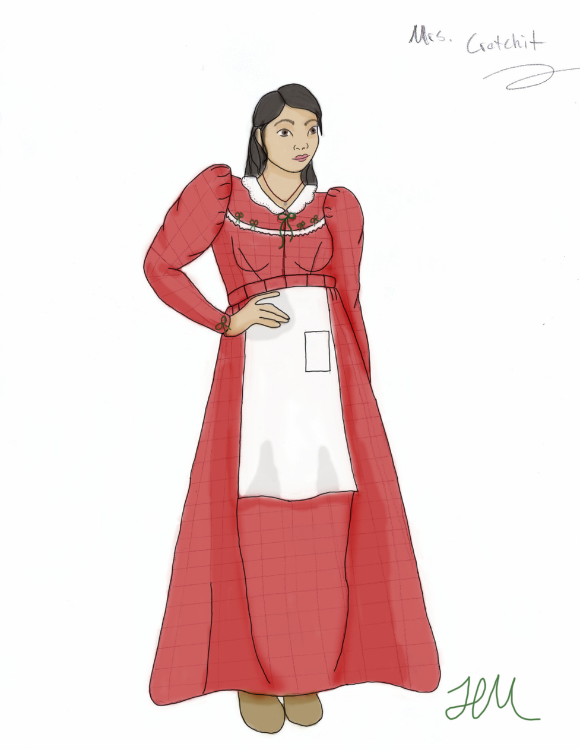 One of the easiest ways to accomplish that was through the women’s dress silhouettes—historically they change the most and they help to signify the different time periods of Past, Present, and Future. I also really wanted to give Mrs. Cratchit some love, so Marie referenced her historical pattern books to pattern and build a new 1840s styled dress for that character. The University of Lynchburg team also referenced a 1840s pattern to construct the bodice silhouette for Mrs. Fred.

For a myriad of reasons, not the least being my desire for something new, I knew we were going to create new designs for all three Ghosts this year. This was an exciting opportunity for me because it presented the chance to design some really fun and different things that haven’t been seen in past productions. The first spirit I redesigned was the Ghost of Christmas Past. Honestly, I really struggled with trying to figure out what I wanted to do with this one. I looked into other productions to get a feel for what people might be expecting and I didn’t find anything I felt strongly about. I finally thought to myself: “What did Dickens want when he wrote this? How did he describe it?” So I reread the original book and the line that stood out the most to me and informed my design was the following:

“It wore a tunic of the purest white, and round its waist was bound a lustrous belt, the sheen of which was beautiful. It held a branch of fresh green holly in its hand; and, in singular contradiction of that wintry emblem, had its dress trimmed with summer flowers.”

I immediately thought, “Wow, I have never seen that. This costume has to have flowers now.” 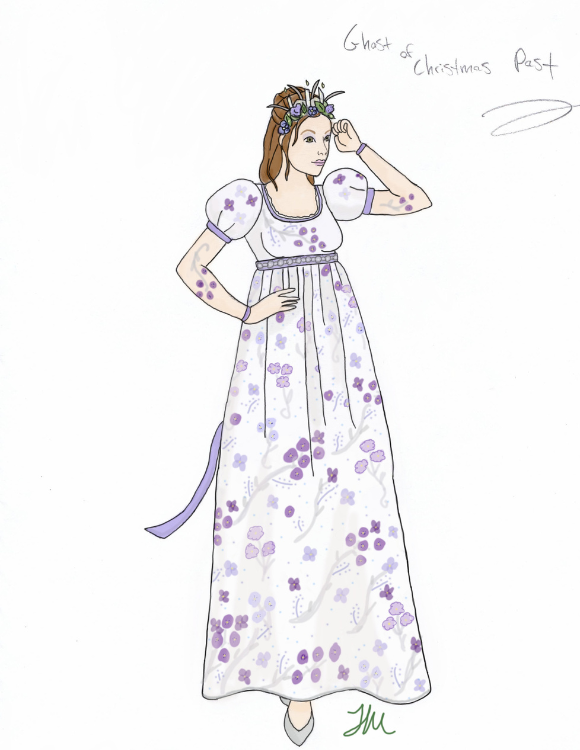 So I started researching gowns with flowers and also saw a few gowns with lights in them. I thought about how in previous years this ghost has had lights in different accessories or how I had seen some with candles. I looked at the description of the ghost’s exit, about the room suddenly filling with bright light. For me, it felt like the ghost lit up with the light of Scrooge’s memories. So then I thought, “Okay cool, so the dress is going to light up now.” I knew I wanted a Regency era silhouette because the memories we are given of Scrooge’s are all set between the time frame of 1800-1820 in our production. Savannah suggested the color purple for the flowers adorning her costume because I was trying to stay away from pinks and golds—they felt too warm and had previously been used before. I really liked the idea of purple and went specifically to shades of lilac and lavender. Lilacs are a personal favorite flower of mine, they remind me a lot of my past. Lilac’s in the Victorian flower language often symbolize “first love” or “the first emotions of love,” which I think is what we get to see in the visions of Scrooge’s past—these are the people and the places that he loved and lost and informed who he became. 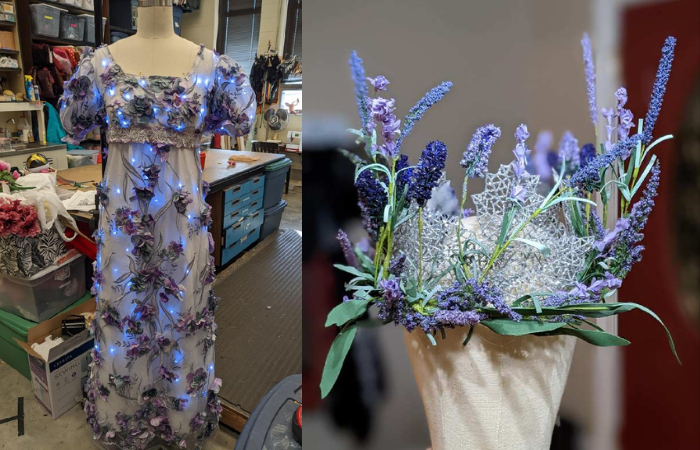 While it was hard to find fake lilacs to put in her flower crown, I hope the lavender conveys the intent. One thing I love about the particular floral fabric we found is that it has purple but also pieces of silver in it, because I wanted something that felt icy and sharp to go with the winter imagery from the book. I really like that the fabric itself has the contradiction of the past: with memories that are like flowers that are beautiful and smell so sweet, but there are also the ones we don’t want to remember—the ones that are sharp and hurt us. 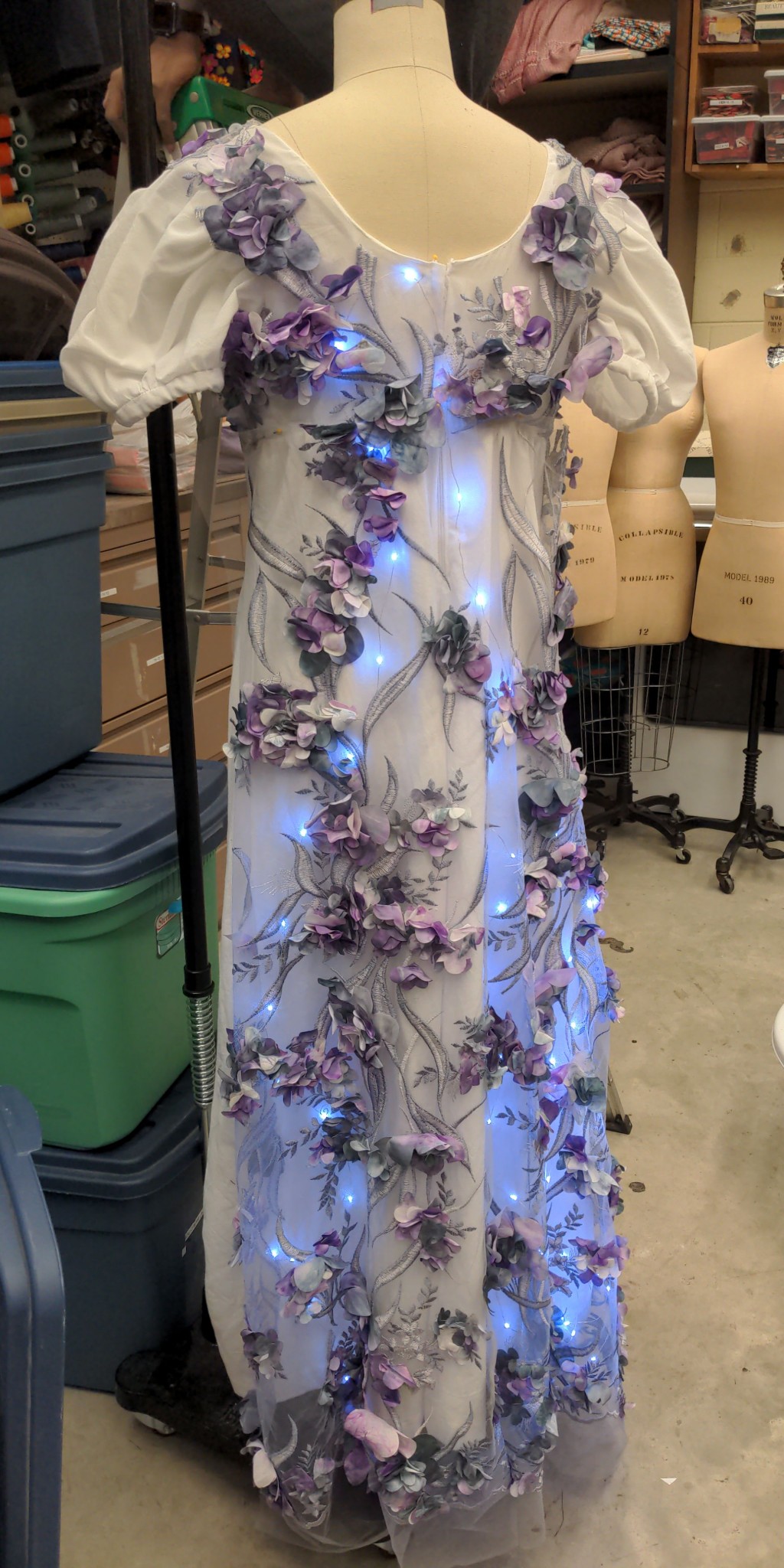 I added the idea for candles in the Ghost of Christmas Past’s headpiece to demonstrate the character’s zaniness. Savannah is the one who ran with it and wanted to have the headpiece reference the Lucia tradition from Sweden, where girls wear wreaths with lit candles on their heads. She is also the one who came up with the idea to have the flowers look like she is in a field—if you look closely you may even find butterflies there! I made a point to have Belle in the only other floral patterned gown on stage during the Past scenes because of how strong of a presence she is in Scrooge’s memories and character development.

For me the Ghost of Christmas Past felt a lot like spring and summer full of sunlight, happy memories, and flowers. The color palette of the Past scenes match with the pastels and the light colors of those seasons. Fan, Scrooge’s sister, arrives in a seafoam green dress and the Fezziwig Christmas Ball features many spring and summer shades helped by the wonderfully light Bridgerton-inspired headpieces made by Tori. We also get to see a glimpse of the past on present-day Scrooge–his scarf is purposely the same shades as the colors worn by Fan and Belle, two of the people who mattered most to him. The idea to have Fan be the one to give him the scarf came as a thought to me at about 6 am one morning. I thought about how family members who knit always make scarves and hats for the people that they love and how precious those items become when we lose that person. I would imagine that Fan dying was one of Scrooge’s first and hardest experiences with death. I’d like to think that after Fan died, he never took it off. 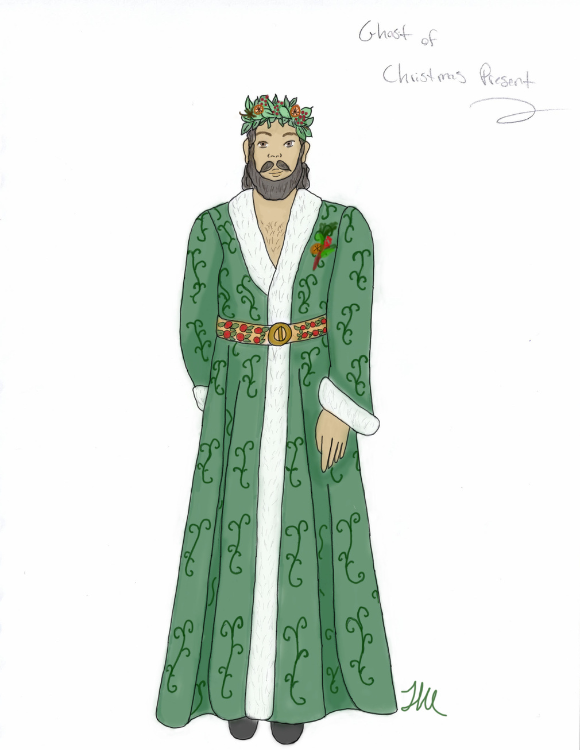 In comparison to the summery past, the Ghost of Christmas Present is Father Christmas, with the warmth and light of autumn and early winter. Dickens describes this spirit as wearing a green fur-lined robe—pretty straightforward. For fun, if you look closely at the green trim on the sleeves and hem of the robe you will find little Christmas trees, as a reference to the holiday. I adore the use of nature in costuming so the Present Ghost has embossed vines in the fabric of the robe and he is decked out in oranges, holly, and greenery that remind me of garnishes at a feast. The golden antlers were a last minute addition to the crown to add more warmth and shine to the look.

Thinking about the Ghost of Christmas Future, I thought a lot about deep winter and how bitter and lonely that season can be for many, especially those with seasonal depression. Winter can be cold and isolating: the earth is dead and brown and there is no sun. I wanted this costume to represent those feelings of hopelessness, loneliness, and neglect. I knew that I wanted to try something new to move away from the concept of using a skeleton face like I designed for our 2019 production or the simple black robes described in Dickens’ novel. 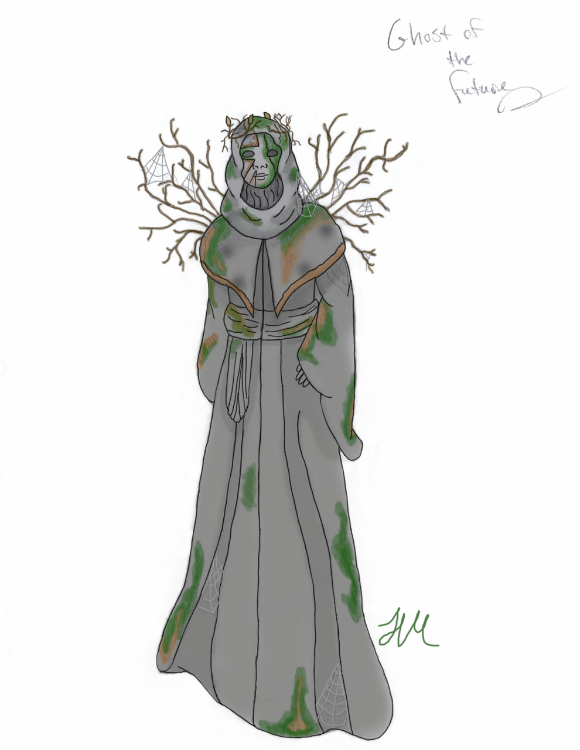 Thinking about the pivotal scene from this particular visitation, I started looking into statues found in cemeteries, especially neglected ones—overgrown in ivy, covered in moss, and draped in cobwebs. Something that has been lost to time. I really liked the idea of something that was made of stone and how it felt very, very cold. I latched onto the idea of a stone face as opposed to a skeleton, it felt really right to me. A skull mask is definitely scary, but I wanted this to be unsettling and scary in a different kind of way. There is something much more terrifying when thinking about Death not having a goal, not having feelings—just emotionless and stone cold. It has no malice, it comes for everyone, there is no prejudice in the way that it takes and there is something so much scarier to that than something that is designed to frighten us like a horror movie. And it’s lonely; I think of how frightening it would be to see an expressionless face in your last moments. I remember doing a fitting with Mauricio in the stilts and the costume. I was standing on an acting block and pinning something to his hood and I looked up into the blank face where you can’t see Mauricio’s eyes through the black mesh of the mask and my stomach dropped. I was so uncomfortable and scared, which is funny because my students and I made this monster. 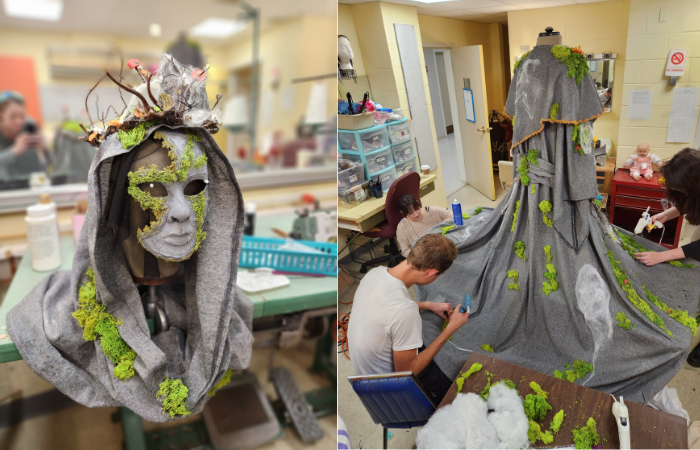 The Ghost of Christmas Future was built at Randolph College with my students. The Future Ghost is covered in moss, sticks, dead leaves, and cobwebs which we all worked to attach during what we fondly called our “moss parties.” There are also eight hidden spiders in the costume, if you manage to see them—and yes they all have names given to them from my students. We had a blast creating this creepy, earthy ghost and we hope he gives you a delightful scare.

I am so proud of my team and all of the hard work that went into creating the costumes for A Christmas Carol. So much creativity, thought, and detail went into bringing them to life. I hope they are as fun for you to see as they were for us to create. Remember to get your tickets and come see our Ghosts in action this month!

Like this post? Be sure to tag us on social media! Join us for our favorite holiday tradition, A Christmas Carol, now playing at the Blackfriars Playhouse through December 30 and bring a donation for Project Goodfellow, our collection drive for Project Mission, when you’re here. Get tickets today!

Costume Designer for A CHRISTMAS CAROL (2022)