Have you become too… “time-honor’d” to attend the ASC Theatre Camp as a camper? Do you nonetheless find yourself missing the dewy streets of Staunton, the aching calves earned on the hike to Deming, or the flickering magic of the Blackfriars Playhouse stage illuminated by the glowing eyes of exhaustion during midnight dress rehearsals?

We’ve got a cure for those “missing my camp days” blues: join our new camp alumni group, the ASC Old Timers’ Society, or ASCOTS. 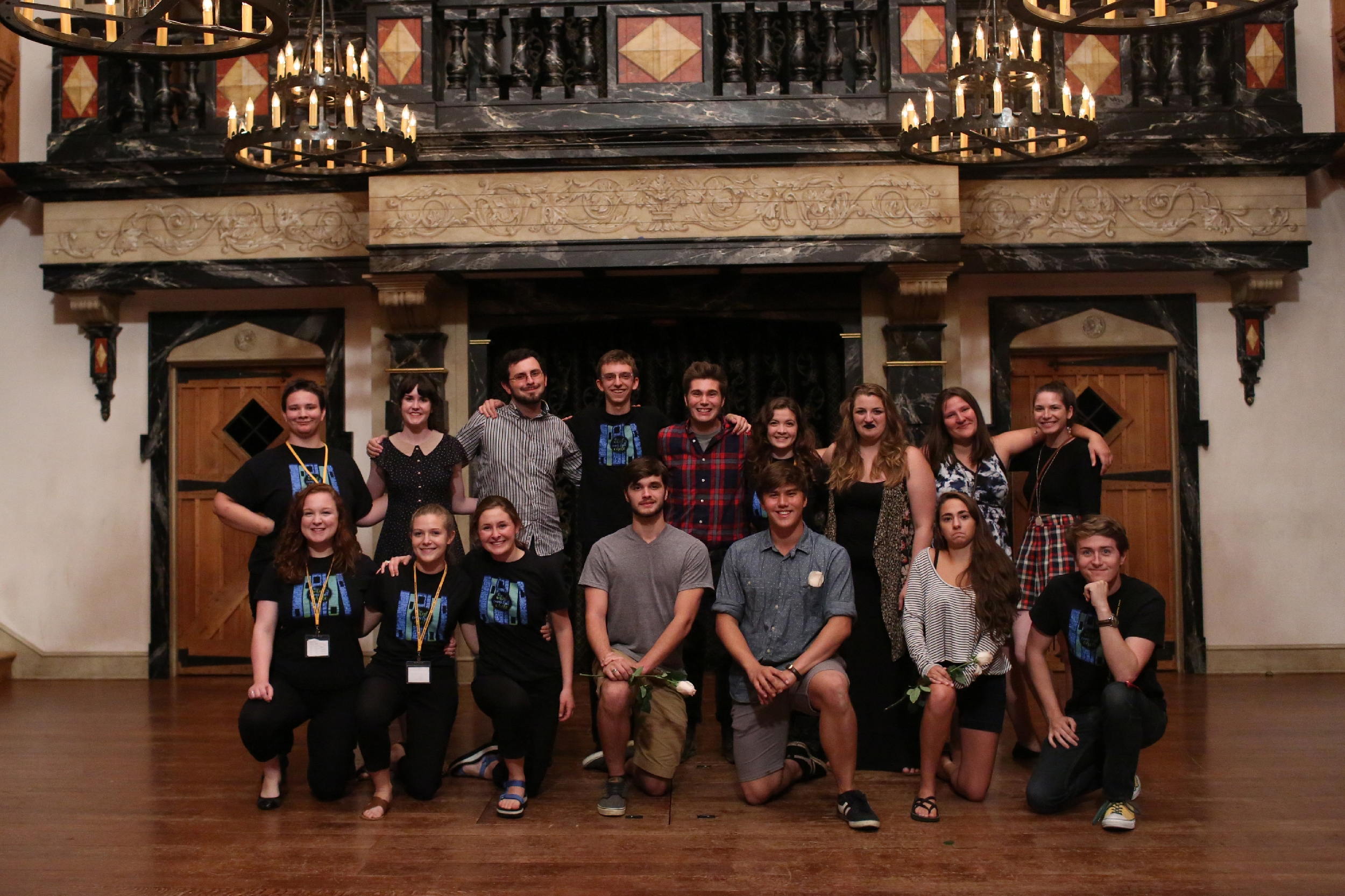 ASCOTS turn out in force for the 2016 ASCTC Session 2 Final Performance Festival. Photo by Lindsey Walters. 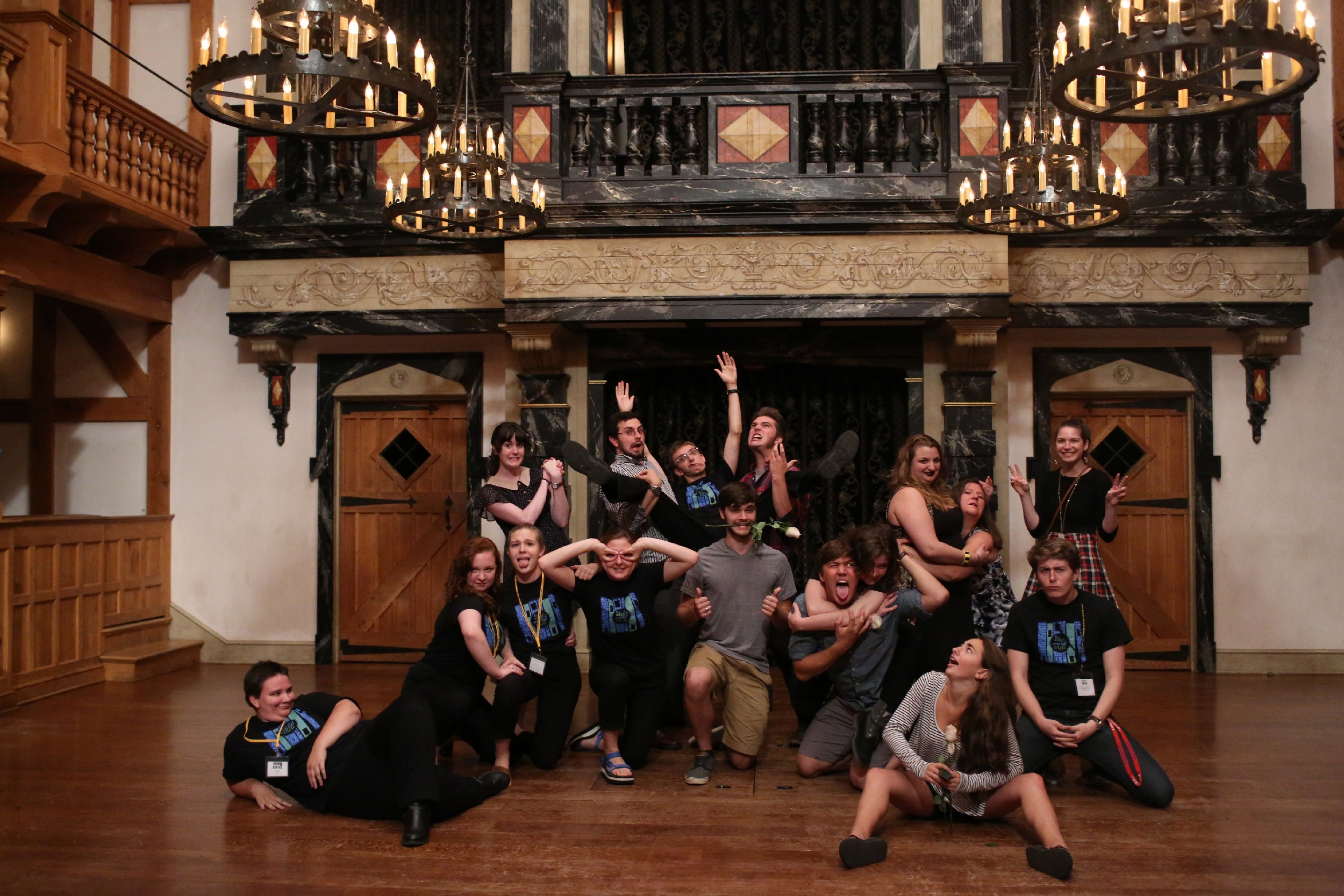 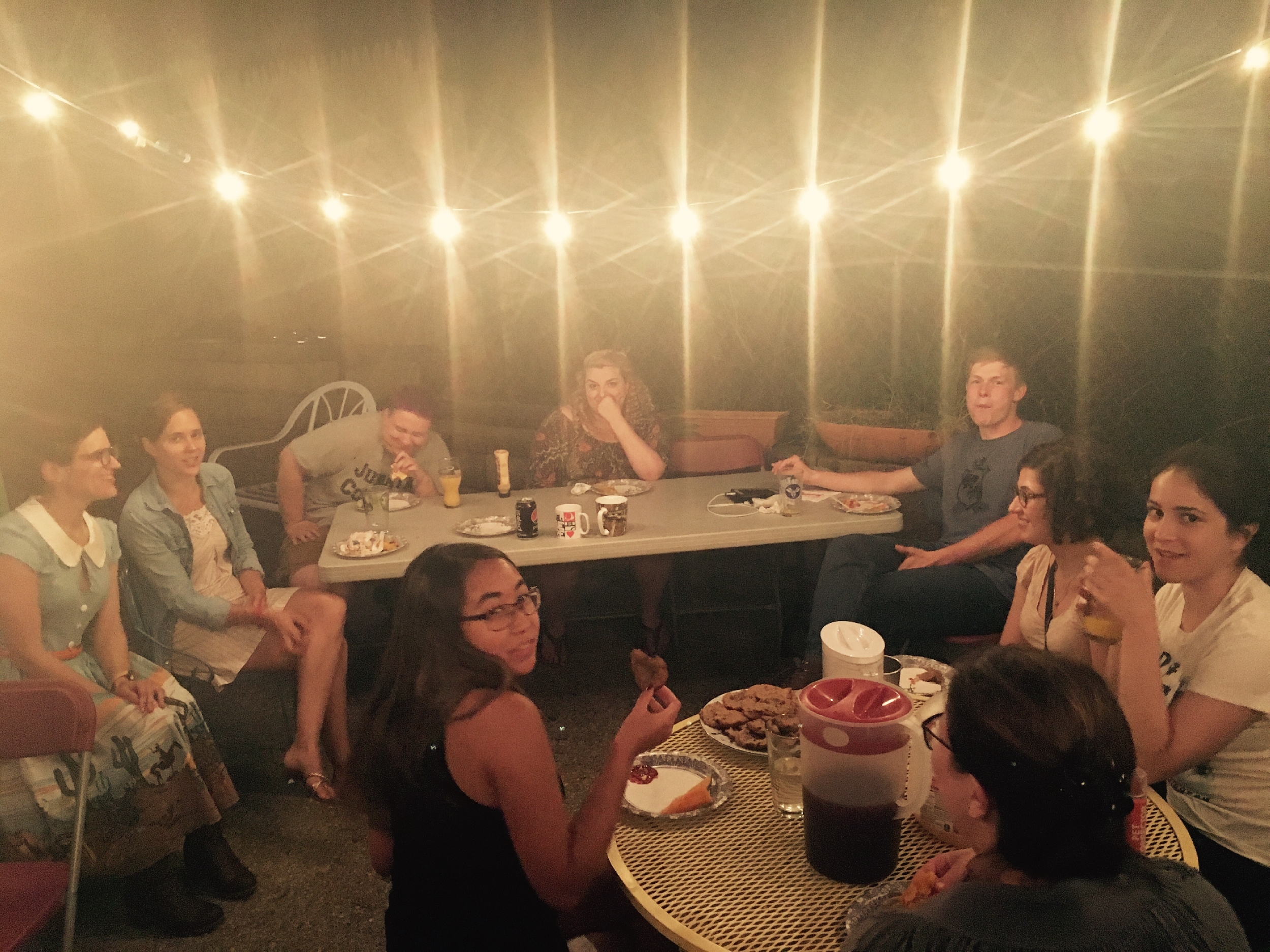 Celebrating their reunion with a kickoff dinner. 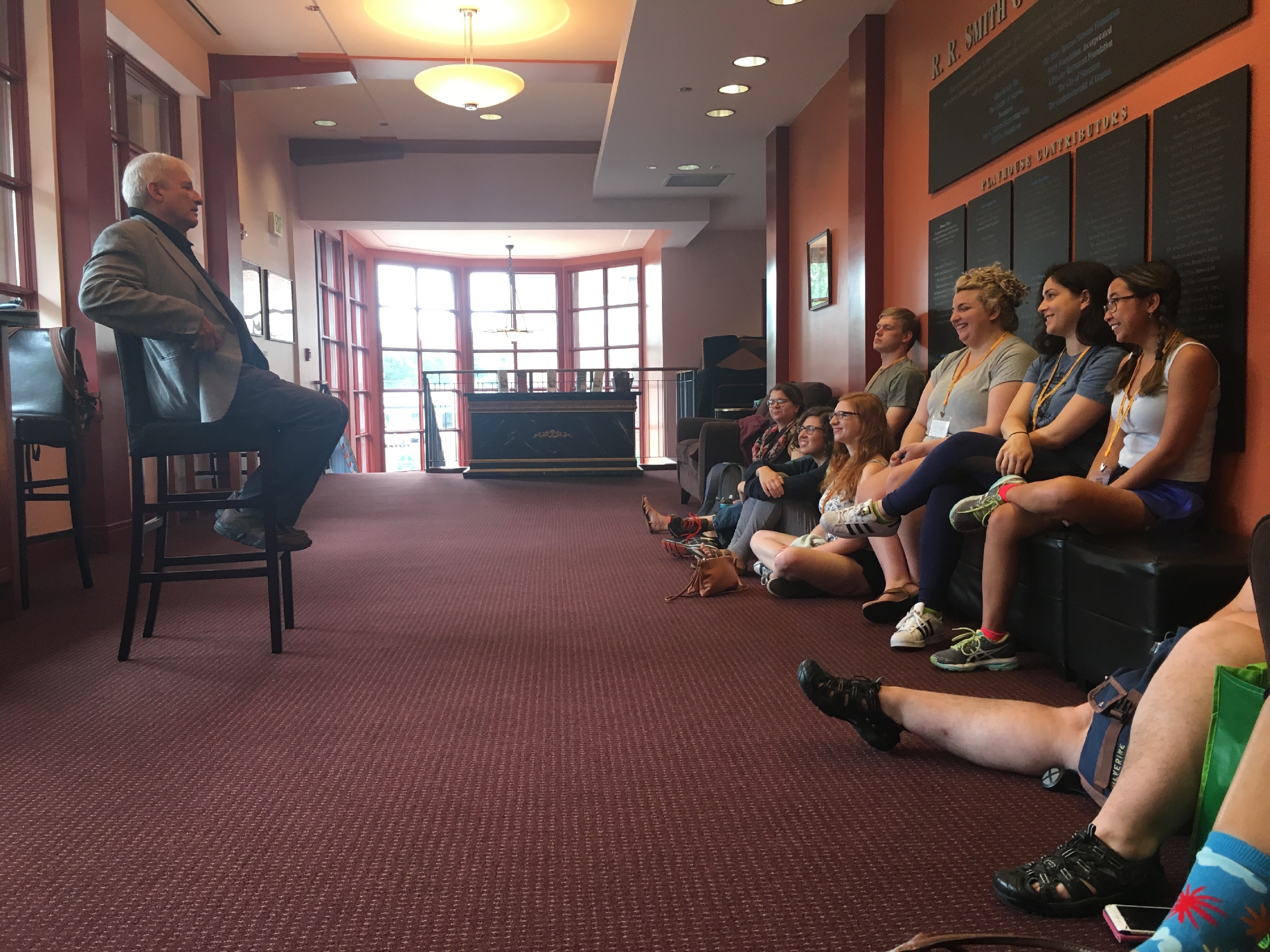 No ASCTC experience (including the ASCOTS Assembly) would be complete without a good Ralphing. 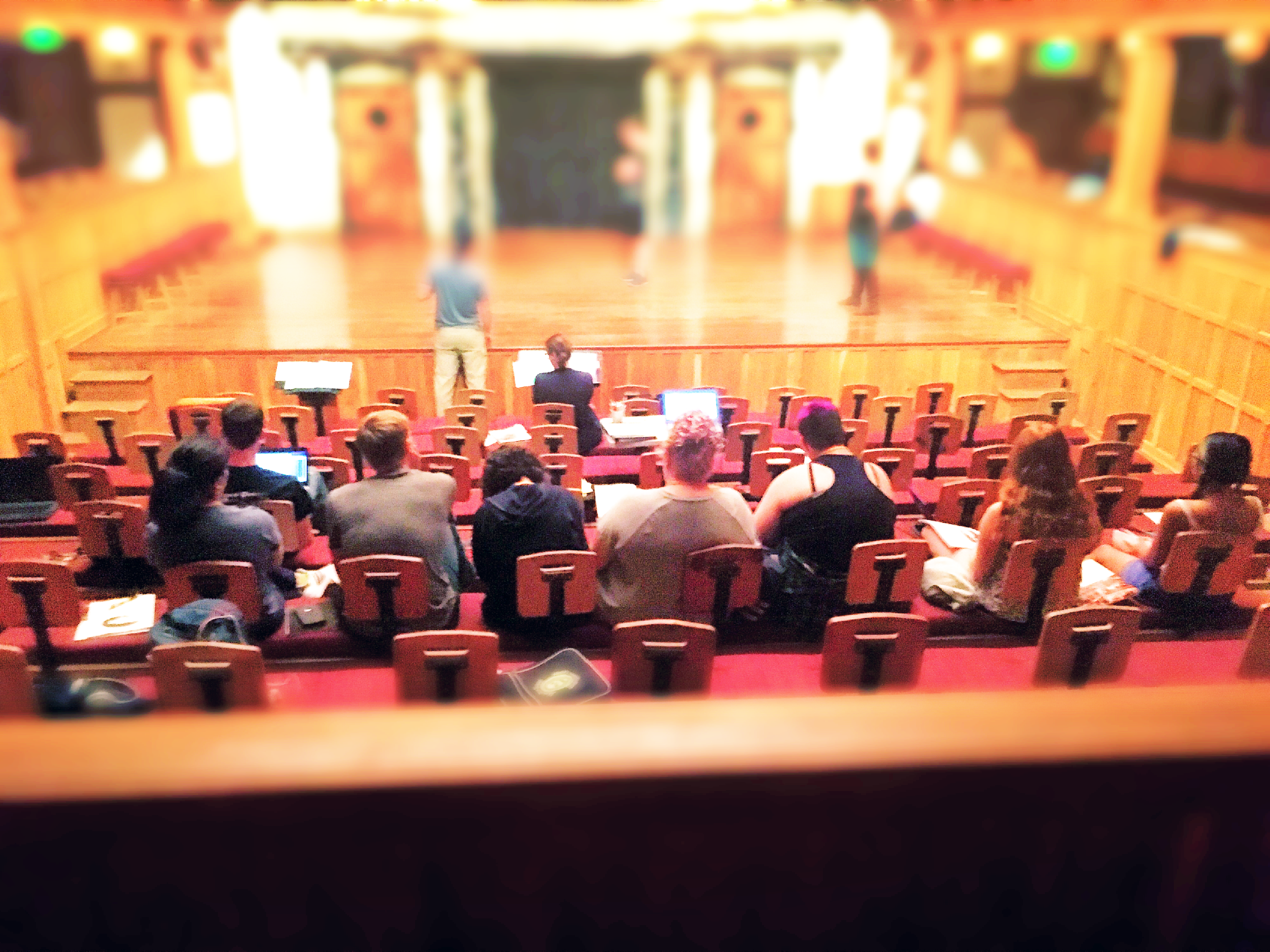 ASCOTS in the Playhouse. 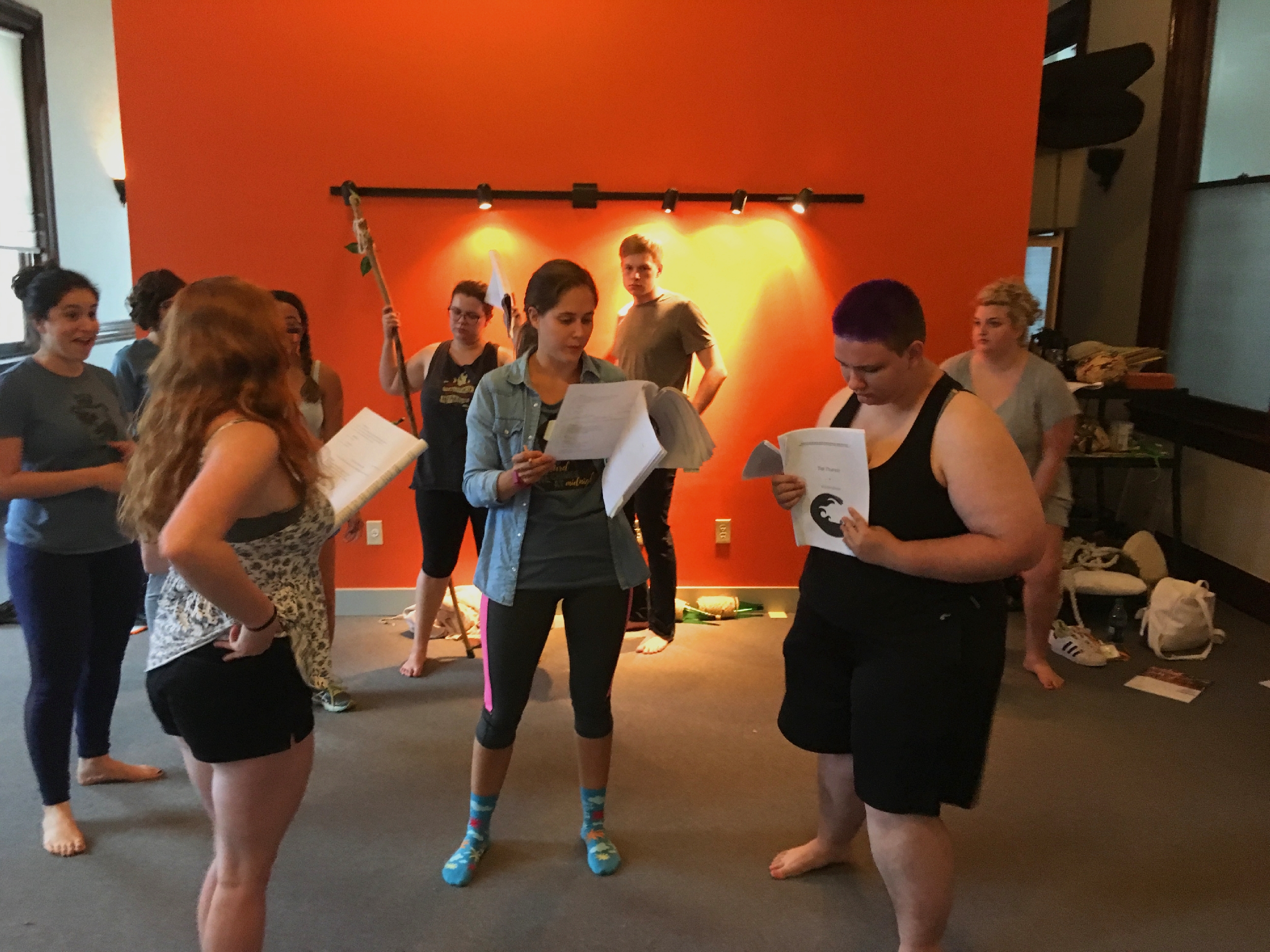 2017 ASCOTS in rehearsal for THE TEMPEST.

An ascot is a fancy kind of tie. It looks like this:

An ASCOT, on the other hand, is a member of the ASC Old Timer’s Society, the official ASC Theatre Camp alumni group. Most of the time, they look like people.

What another excellent question! You’re so smart. Yes, in fact, the ASCOTS do more than bask in the glow of their own excellence: they ASSEMBLE!

How much does it cost to attend an ASCOTS Assembly?

Assembly admission appraises at $350 per ASCOT and covers all costs associated with ASCOTS activities, including show tickets to all ASC performances, access to rehearsal and performance facilities (including the Blackfriars Playhouse), and your super ballin’ ASCOTS t-shirt.

Admission also includes meals. ASCOTS attend off-campus meal events (like the Arrival BBQ, Dress Rehearsal Pizza Party, and Secret Sonnet Farewell Brunch) together, as a group. For other meals, ASCOTS may eat in the MBU Dining Hall, or explore the many dining options in downtown Staunton on their own.

Admission does not include housing.

ASCOTS are free to make their own arrangements, or take advantage of our deal with the Howard Johnson in downtown Staunton.

Are there any delightfully alliterative discounts I should know about?

I’m so glad you asked! Acting with alacrity and affirming attendance ahead of Monday June 4, 2018 to access our $50 Anticipatory Aviator Admission Abatement* – and adjust the actual amount of admission to $300.)

What sort of activities should I expect during an ASCOTS Assembly?

Details are subject to change, but a few things are certain about the ASCOTS Assembly:

Do you have a sample schedule?

Indeed, la. This example should give you a general idea of what to expect from the Assembly — treat it more like a set of guidelines than a rigid schedule

What are the requirements for ASCOTS membership?

In order to be an ASCOT, you must:

So, I never actually attended camp, as in as a camper... but I worked as a counselor/show director/intern! Can I be in the ASCOTS, too?

Yes. Yes you can.

Hold up. That seems contradictory when you take into account the requirements you laid out above with the whole a) attending camp and b) can't attend camp anymore stuff. What gives?

I’m gonna let Ben Curns answer this one. For those of you who do not know Curns, he has been an actor for the American Shakespeare Center’s resident, touring, and Renaissance troupes. He has also directed several shows for camp. He never attended camp as a camper, but why don’t you think about whether he qualifies as an ASCOT after you read what he has to say:

The summer of 2006 was a damn hard one. Thank goodness for that 2 Henry IV. Those young actors may never know how much I needed that…then again…they’re all really pretty sharp…maybe they do.

Campers aren’t the only ones profoundly affected by the experience of the ASC Theatre Camp. The ASCOTS is held together by its members’ shared bond of having that experience, not by their status as “camper” or “staff” and not by whether they attended “ASCTC” or “YCTC.” And that is the answer to that question. It has nothing to do with the fact that otherwise, none of the current camp admin staff would get to be members of the ASCOTS and that would suck for us.

In that case, how come current campers can't be in the ASCOTS? They've been to camp before, which makes them alumni. How come they have to wait until they're too old to be campers in order to join the ASCOTS?

Because the world isn’t fair. But, if you’re patient, you will be inducted into the ASCOTS society at the end of your final summer. You’ll even get a shirt! Look at these awesome shirts: