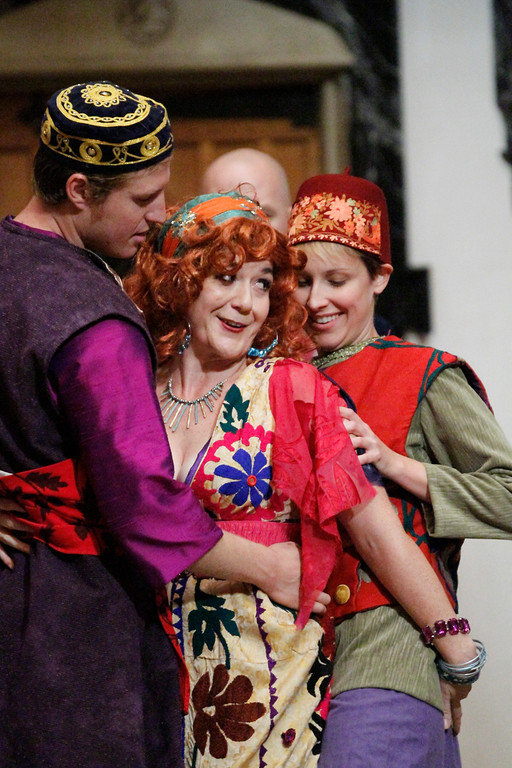 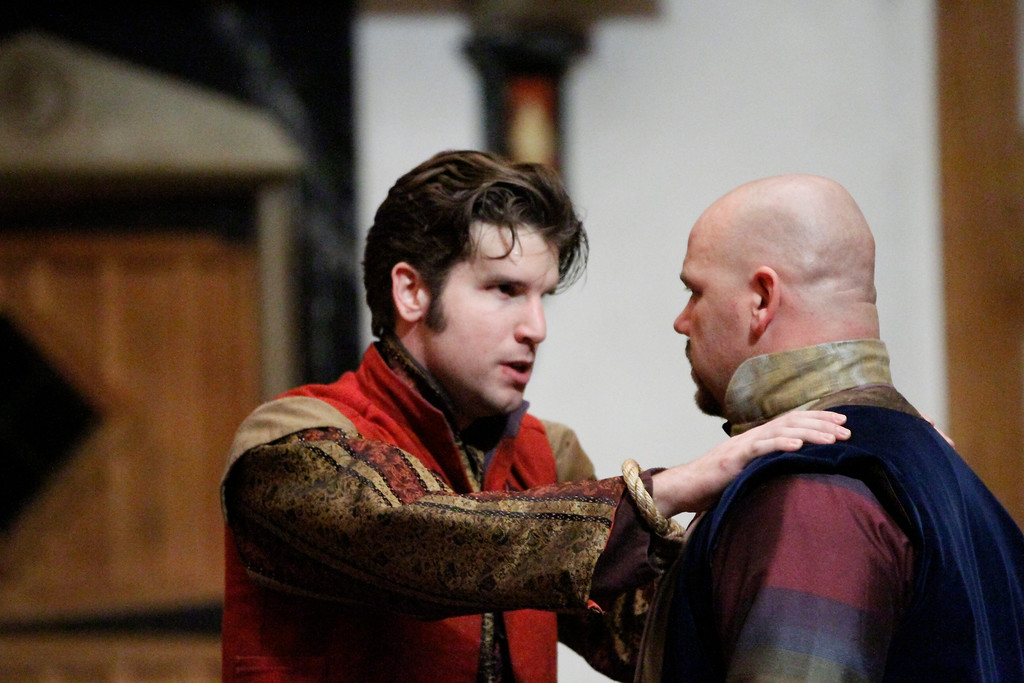 Aidan O'Reilly and Rick Blunt in MEASURE FOR MEASURE. 2011. 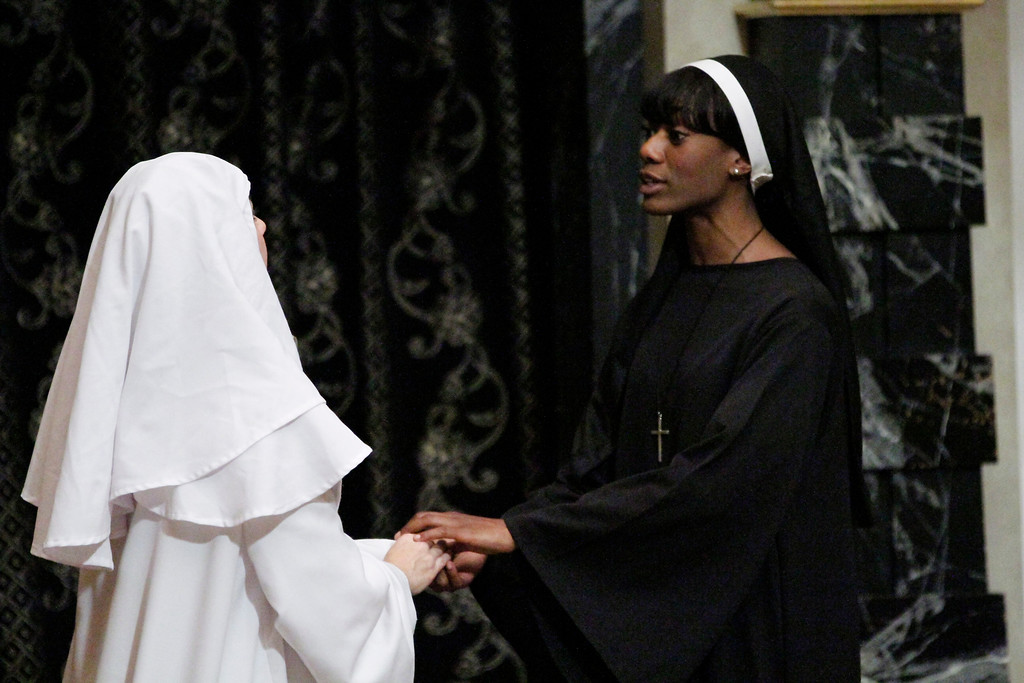 Kelley McKinnon and Brandi Rhome in MEASURE FOR MEASURE. 2011. 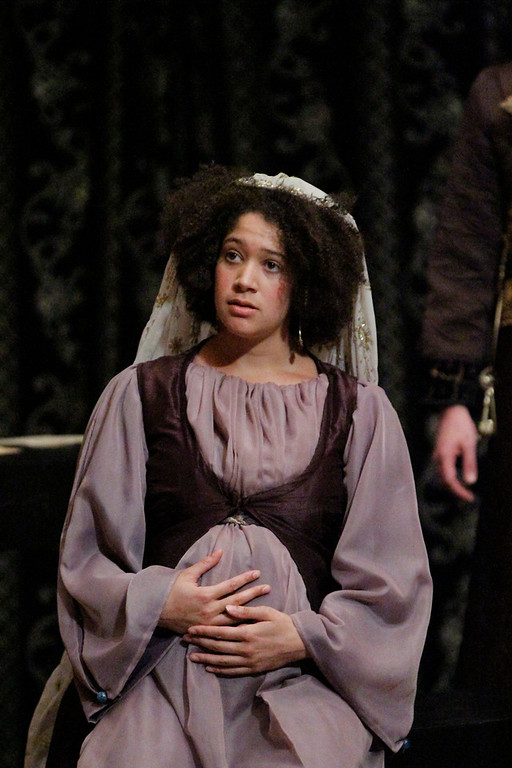 Natasha Solomon in MEASURE FOR MEASURE. 2011. 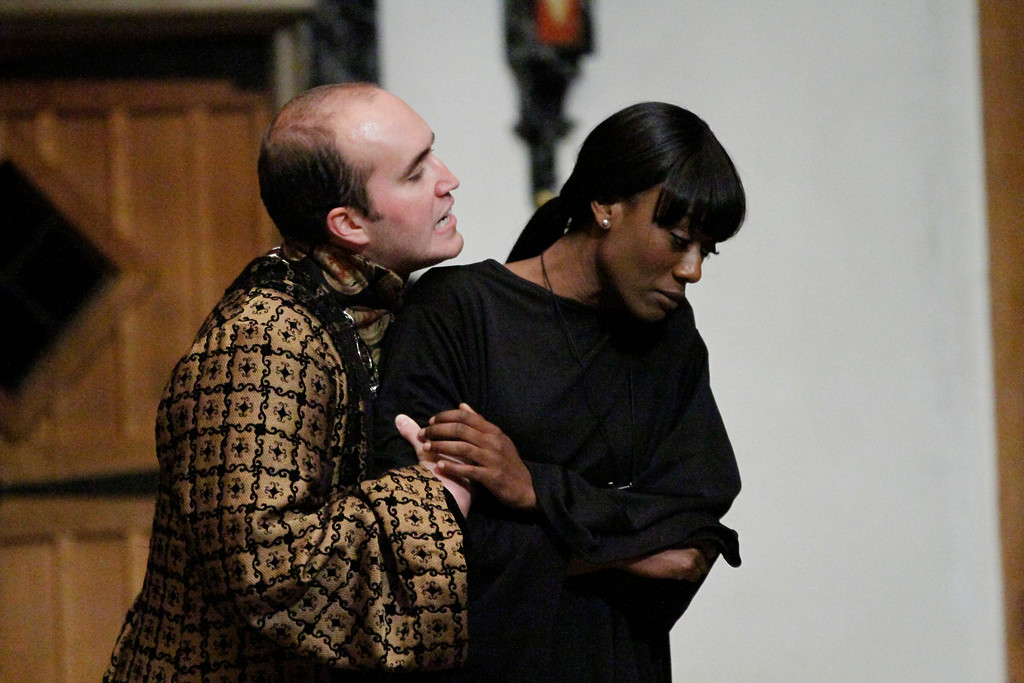 Jake Mahler and Brandi Rhome in MEASURE FOR MEASURE. 2011. 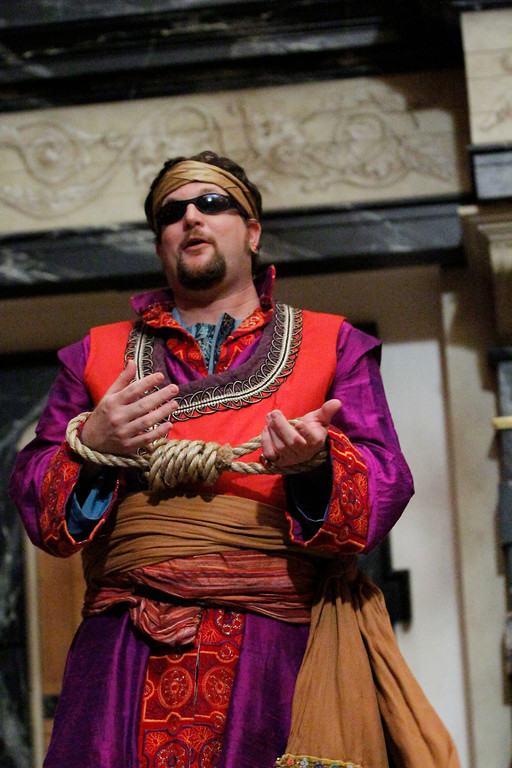 Dennis Henry in MEASURE FOR MEASURE. 2011. 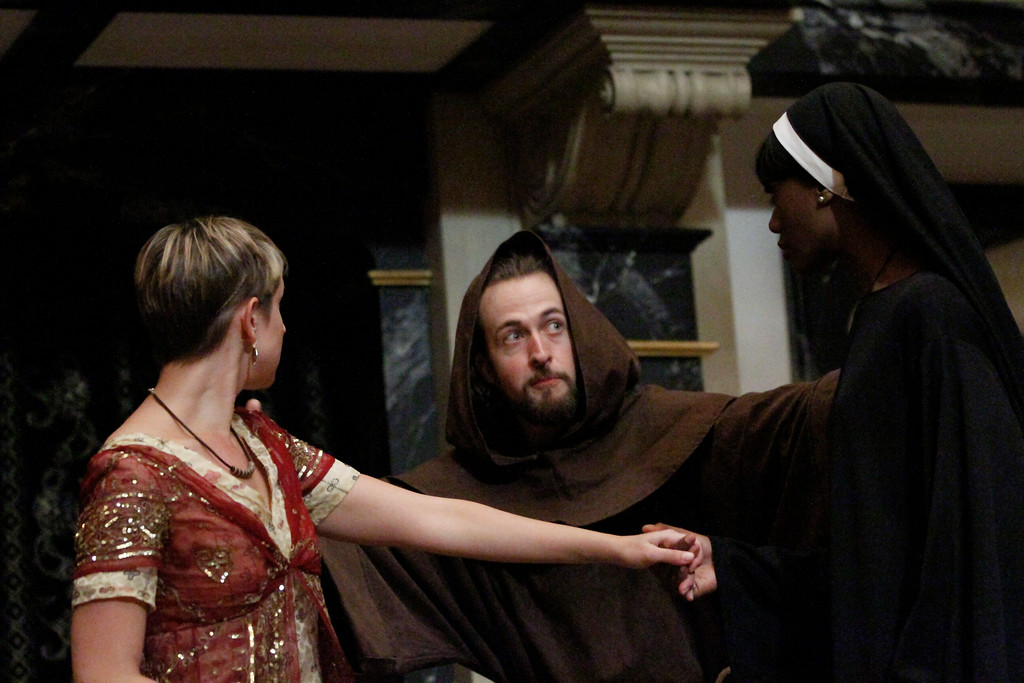 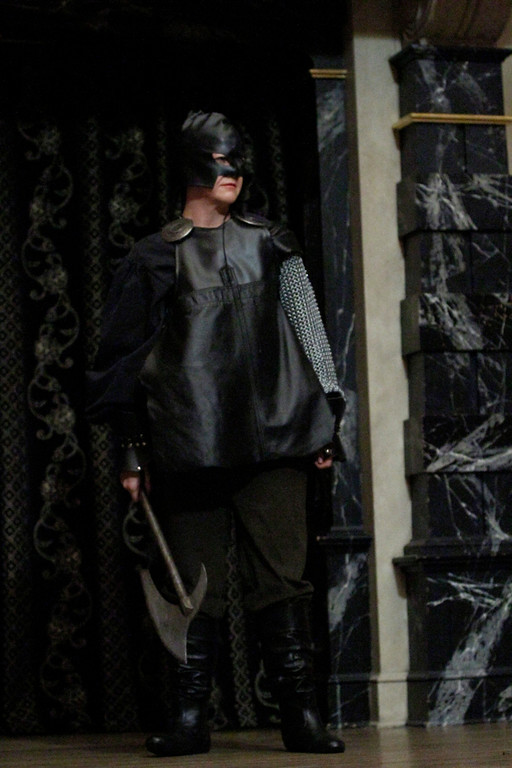 Kelley McKinnon in MEASURE FOR MEASURE. 2011. 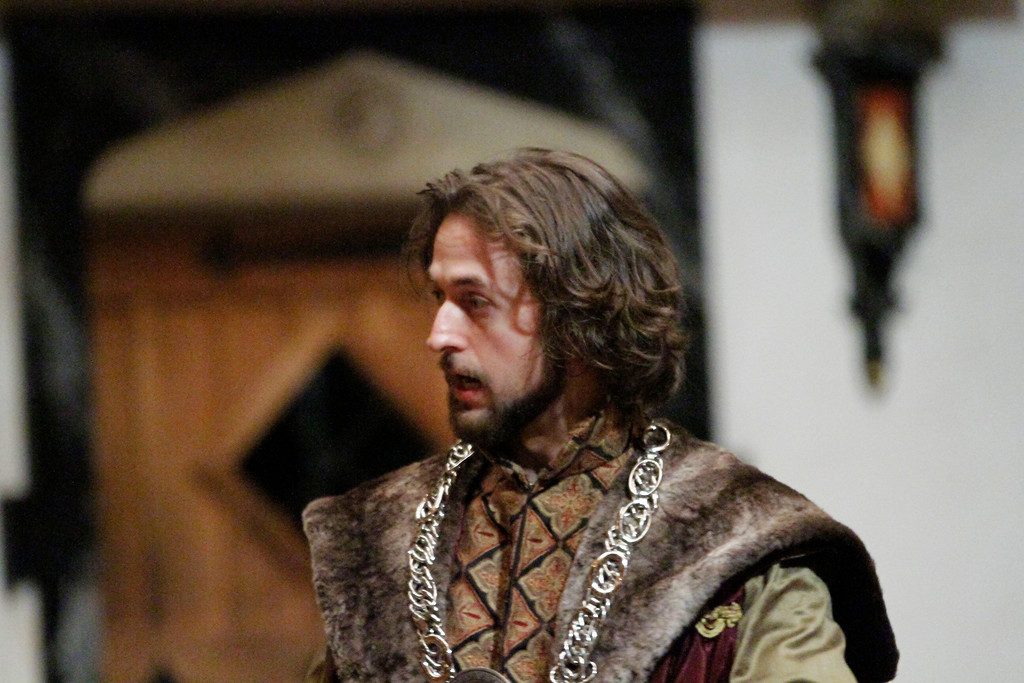 Chad Bradford in MEASURE FOR MEASURE. 2011. 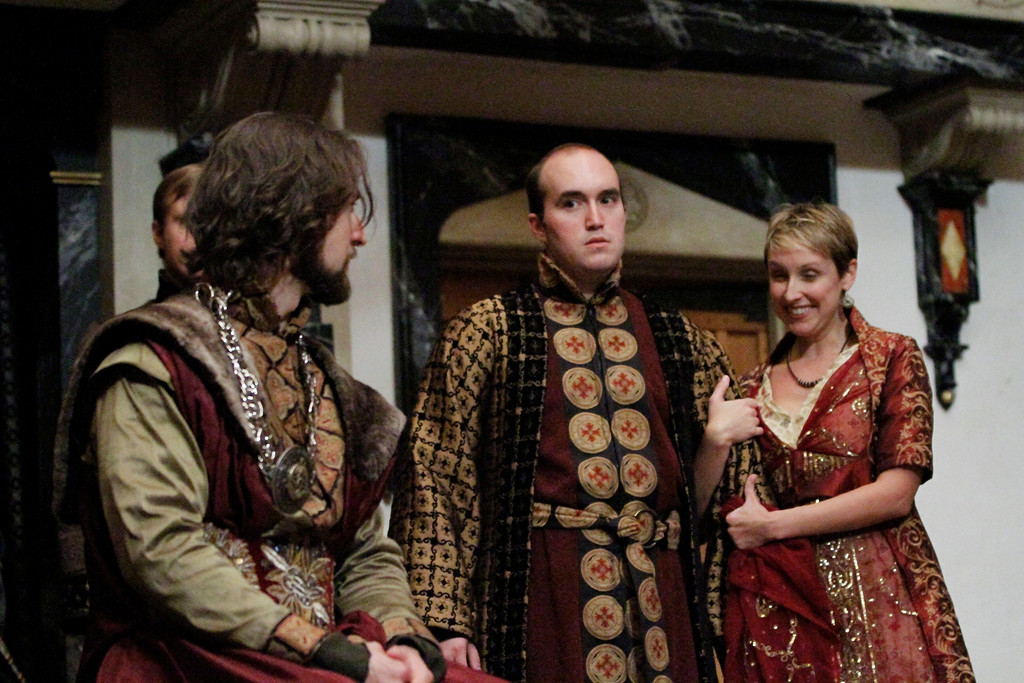 Black, White, and Shades of Gray

The Revels Accounts show that Mesur for Mesur by “Shaxberd” was acted in the banqueting hall of Whitehall on St. Stephon’s Night (26 December) in 1604. Most critics suppose that the play was written earlier that year and performed at the Globe in the summer of 1604, but no early performance records survive other than those for the royal Christmas festivities.

As long as scholars could not decide whether this play was a comedy or not, it never got played. In fact, this ambiguity makes it one of the most revealing of Shakespeare’s works.
– Peter Brook

Measure for Measure might be Shakespeare’s most enduringly modern play. It’s not a “problem play” because Shakespeare had problems writing it or because audiences have a problem enjoying it. It’s a problem play because it defies genre, because it cannot be neatly labeled, and because the ending is as disturbing as it is “happy.” It’s a play that asks more questions than it answers. Yet these same “problematic” attributes have kept the play fresh for centuries. Unfortunately, the fallible hubris of humanity hasn’t changed much in four hundred years, so we can go down the list of politicians (on both sides of the aisle) and religious figures of this and many eras caught committing the acts they ever-so-publicly denounce. The play stays fresh because we continue to struggle with the same issues.

Characters within Measure provide opposing answers to the many questions raised in and by the play. Shakespeare uses ambiguity and antithesis to give conflicting answers to complicated questions. In doing so, he mirrors the complexity of humanity and shows that no easy answers exist, especially regarding life’s most profound and confounding subjects: religion, authority, purity, justice.

The audience identifies with, believes in, and agrees with certain characters – and disagrees with others. We judge the”rightness” and the “wrongness” of each character’s actions and arguments based on our own moral standards, our own social circumstances, and our own political and religious beliefs. Thus, two people sitting next to each other in the audience may form multiple interpretations of Measure depending on when she or she sees it and depending on the events in that person’s own life.

Despite the “happy” endings – in which the “villain” is revealed, lives are saved, order is restored, and couples are married – the play’s ominous undertones and ambiguity leave an unsavory aftertaste. Can there really be a “happy” ending in a play where:

As to the “hero,” the character in Measure who embodies and personifies ambiguity and antithesis more than any other is Duke Vincentio. The quality of the Duke’s “goodness” is as much an issue in the play as Angelo’s “badness.” Can the Duke really be “good” when he:

In spite of these dubious actions, however, it is the Duke who ultimately sets things right in Vienna. He puts an end to Angelo’s opportunistic dealings, saves Claudio’s life, reunites brother and sister, and helps Isabella find mercy and forgiveness. So, is he “good”?

Shakespeare lets the audience make up its own mind. So, too, does this production, which encourages you to wrestle with the issues and come to your own conclusions. The play should be shocking. The play should be funny, and not just because of hypocrisy. I hope we can make you think, make you laugh, make you question. If we do our jobs well, you will leave the theatre different than when you entered. That’s how good Measure for Measure is. That’s how good Shakespeare is.