On yesterday’s #AskShakespeare day on Twitter, someone asked for recommendations on Shakespeare-related books of fiction. As it happens, yesterday I was about 50 pages from the end of an excellent alternate-history thriller featuring Shakespeare as the main character. I finished last night, and so now I’d like to recommend it to you all. 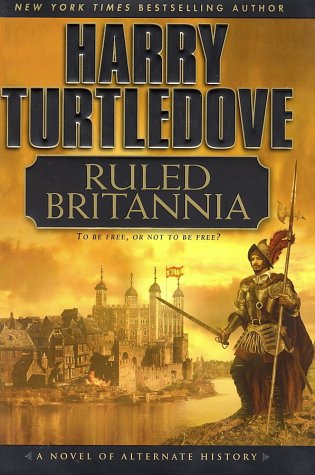 The premise of Harry Turtledove’s alternate history tale, Ruled Britannia, is that the Spanish Armada did manage to take over England in 1588. Philip II installs his daughter Isabella and her consort Albert on the throne of England, imprisons Elizabeth in the Tower, and returns England to Catholicism. Ten years later, Philip is dying, Elizabeth is yet imprisoned, and while most of the populace complies with the will of their Spanish overlords, a current of discontent still runs beneath the surface.

The driving plot of the book centers on William Shakespeare, presented as a humble playwright and an actor of middling skill, whose talent for composition gains the attention of those in high places. First, William Cecil, Lord Burghley, commissions Shakespeare to write a play to inspire the English people to an uprising. Loyal to Elizabeth, Burghley has been planning a revolt to occur after Philip’s death, but he wants words to inspire the masses to back his maneuver. For the topic, he chooses a story out of Tacitus: Boudicca, the Iceni queen who revolted against the Romans in the first century. At nearly the same time, one of the Spanish dons requests that Shakespeare craft a play to be a fitting epitaph to King Philip. Shakespeare writes both, and the company rehearses both, not knowing which they’ll actually mount. During the process, Shakespeare finds himself wishing the task had been given to another man — especially as the bodies of those who might impede his progress start piling up around him.

Turtledove includes lots of nice historical touches, and the cast of characters is well-researched and comprehensive. The book does a wonderful job bringing the world of early modern theatre to life, even with the adjustments made for the alternate history. Burbage and Kemp are major characters, with references to Burbage’s family’s theatrical history and to Kemp’s Nine Days’ Wonder. Marlowe’s still alive and writing plays at the beginning of the book, and he seems torn between admiring Shakespeare’s talent and sourly resenting that it has eclipsed his own. His probable historical murderers, Ingram Frizer and Nicholas Skeres, play shadowed but critical roles, clearing the path for Shakespeare’s success and Cecil’s rebellion, as does Thomas Phelippes, historically one of Francis Walsingham’s intelligencers, here a cunning double-agent. Robert Devereaux, known to our history as the traitorous Earl of Essex, makes an appearance towards the end of the book. Shakespeare’s opposite number throughout the book is Lope de Vega, one of Spain’s most prolific authors, whose reputation there is second only to Cervantes. Turtledove takes him out of his native land and brings him ashore with the Armada. The English theatre fascinates de Vega, and he becomes friends, of a sort, with Shakespeare and Burbage. His presence threatens the production of Boudicca, however, as the company clearly cannot rehearse with him hanging around. His presence augments the tension behind Shakespeare’s dilemma and keeps the action clipping along at an exciting pace.

The book is a goldmine for the Shakespeare-lover. Turtledove sprinkles his characters’ dialogues with lines from Shakespeare’s plays, and recognizing them can be a bit of a game to go along with following the main plot. I almost wish I’d kept a tally of how many I found while I was reading. While extremely clever, however, they could be a bit overwhelming in places, and occasionally they did seem somewhat forced, as though Turtledove just really wanted to include that line no matter how. He managed not to stray into seeming kitschy or cutesy with the references, however (which is not something that can be said of all novels featuring Shakespeare as a character); on the whole they were quite sly without feeling obnoxious. I also took issue with a few of the choices Turtledove made — for instance, having the company play Macbeth in 1597. I’m not arguing the date itself — in an alternate universe, I’m willing to entertain all kinds of shifting around of chronology. But Macbeth would just plain never have been written without King James on the throne, so that element jarred me out of Turtledove’s mostly-seamless historical diversion. I’m also not positive that Turtledove fully understands what iambic pentameter is and how it works, that it’s more than just ten syllables to a line — some of the lines he invented for Boudicca and King Philip don’t scan properly at all, even though he discusses them as though they’re perfect iambic lines. Despite those nitpicks of mine, however, his alterations generally hold together as a reasonable presentation of the early modern theatre world under slightly different conditions than we know it.

Overall, I thoroughly enjoyed Ruled Britannia. Turtledove does an excellent job of relating the ability of language to move hearts and inspire an audience. He also gets his reader emotionally invested in the characters and their dire straits; by the end of the book, I passionately wanted to see Shakespeare and the company present Boudicca, and I wanted the rebellion to succeed, but I also cared about what happened to de Vega and the other side characters. Turtledove presents the humanity on both sides of the conflict quite well. The climax of the book is thus both thrilling and emotionally moving. I can cheerfully recommend Ruled Britannia as a delightful read to Shakespearean enthusiasts and other Anglophiles looking for high-quality brain candy.