Do you ever take a look around you, and ask yourself: “Now, how did I get here?” I found myself doing that a lot during the last week of October. The question wasn’t the kind of thing that wakes you in the middle of the night in a cold sweat (though in the weeks leading up to October 25, there were plenty of those). Rather, it was a query of wonder. As I stood in the Blackfriars Playhouse October 25-30, I felt as though I had super-glued rose-colored glasses to the bridge of my nose and couldn’t shake that amazing feeling that comes when one is surrounded (at home, no less) by dear friends (new and old), excellent conversation, amazing scholarship, and the joy of the work of two years coming to fruition in a beautiful way.

My parents have a difficult time understanding me when I say “I won’t be really available for a few weeks, the conference is coming up.” What, exactly, could be keeping me so busy? To be fair, when we were separated by only 90 miles, as opposed to the 1300+ that divide us now, my life was pretty hectic. In my occupation as a high school Theatre teacher, teaching five classes daily, producing six shows a year, with set-building, costume construction, tech rehearsals, I was never as consumed as I am when Conference time rolls around in the odd-numbered year. It’s different, a different kind of busy – an all-consuming, all-anticipating, all-energizing, and yes, all-exhausting kind of feeling that builds for 24 months and culminates in a week of shared excitement, with faces both new and familiar. And the joy of overhearing as the answer to “How did you get here?” not “Bus, train, car,” but “I heard about it from…” or the even more gratifying “I come every time, wouldn’t miss it.”

My first conference was at its third incarnation in 2005, when I was in my first year in the Masters Program at MBC. Two months into the program, and I found myself in the same room with the authors of my textbooks and all of the articles I was looking up in Shakespeare Quarterly.

And over there is Stephen Booth, George Walton Williams, Roz Knutson, Leslie Thomson, Alan Dessen. And some friends no longer with us, Bernice Kliman, Arnie Preussner, and Barbara Palmer, whose absence we have felt with sorrow since our last parting.

I knew, in that moment at my first Early Arrivers’ party, that this place was special. What other grad program gives its students the opportunity to network on their home turf? In this case, the turf of the Blackfriars playhouse, always a space of generosity and intimacy and, for one week in October on odd-numbered years, a space of enviable scholarship and flourishing ideas. How was I lucky enough to get here?

My previous conference experiences were all in my undergrad discipline, Theatre Arts. Those conferences featured more workshops than papers, more seminars than presentations, more off-the-cuff speaking than formal delivery. It was a shock to my system to see people reading from a lectern on the stage. But then, the ASC actors arrived. Their contributions linked the two worlds as no other glue or bridge could. They are proof that seeing is the quickest path to believing, whether one needs to be shown a character or helped to understand a presenter’s thesis. In the years since my first conference, it has been my privilege to work with those talented actors to improve interactions between presenters and their actors, to improve communication, to improve the general affect of the conference. We’ve come a long way, and though I know we still have some way to go toward a perfect system, the coming-together of actors and scholars in the way the Blackfriars Conference encourages makes me exclaim: how did I get here and how long can I stay?

In 2007, 2009, and again in 2011, the Conference gave me the opportunity to work along side my mentor, and, I am glad to say, my friend, Ralph Alan Cohen. When I took over from Sarah Pharis (aka Sarah #1) in 2007, I had big shoes to fill. Sarah’s organizational structure — her daily work flow chart is still the basis for everything that happens behind the scenes — made it possible for me to step in and to help Ralph to achieve his goals: good papers, good friends, good food, good times. It’s not as easy as it sounds. This year, I began to think of it as akin to planning a 6 day party for 250 of my dearest friends. Each hour of each of the 16 hour days just needs to be scheduled with events, food, drink, and plays. I’d just need to contact each of the 100+ presenters, the 50 grad students, the 15 actors, the 5 caterers, and the 5 venues to give them individual instructions for each minute of that time, get the invites and the publicity out, and then make sure everyone feels pampered and loved while they are here. Not so hard. It’s not, really.

Not this year, anyway. For the first time since my 2005 conference (when I was merely a volunteer), I had a full team in place and on board so early with planning and strategizing, that I actually got to watch my friends, both presenters and actors, in every session, and I watched the rest of my friends in the audience enjoying every minute.

How did I get here? Well, for that, I have loads of people to thank. Ralph, for trusting, the ASC actors and artistic staff for being so generous and sharing their talents in the highlight event of each day, Cass, Ben, Christina, Asae, Kim, Anne, bear wrangler Brian, Clara, Paul (Menzer and Rycik), the entire admin staff at ASC, the wonderful box office staff, the artistic staff and actors for making each session and evening performance memorable, the MBC students who exceeded their colleagues at past conferences in both volunteering and contribution of scholarship. They made it look (and feel) easy, and I am tremendously grateful.

Some highlights for me at the 2011 conference included: 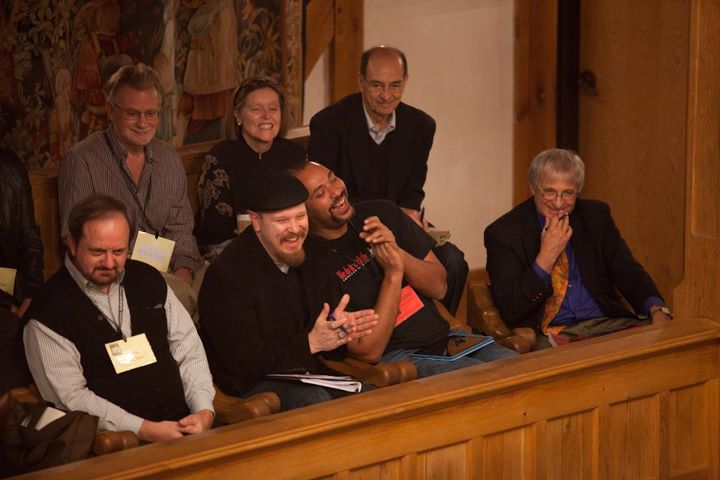 • The delicious food at the early arrivers’ party.
• Stephen Booth’s paper on Shakespeare and Audiences.
• Go Dog Go, as devised and performed by Chris Johnston, John Harrell, Jeremy West, Dan Kennedy, Greg Phelps, Miriam Donald, and James Keegan.
• Hearing about the new Indoor Theatre in London from Neil Constable (Heck, meeting Neil Constable).
• Bill Gelber’s ‘ A “Ha” in Shakespeare….”
• Ben Curns sleeping onstage (as directed) in Casey Caldwell’s paper (and then using lightening quick reflexes not to knock over the 100 champagne glasses set behind the curtain as he exited).
• Chris Barrett.
• Joe Ricke and Jemma Levy in a morning session to rival all others.
• George T. Wright and James Keegan’s mutual admiration discussion.
• Finding out “Why are there no blowjob jokes in Shakespeare” from Matt Kozusko.
• Beth Burns and the Hidden Room.
• Stuart Hall’s participation, thanks to Brett Sullivan Santry.
• Natasha Solomon and Dan Burrows acting in Bob Hornback’s Renaissance Clowns paper.
• Seeing our Conference Attendees see John Harrell’s Hamlet.
• Our late night shows (wow).
• William Proctor William’s experiment.
• Seeing ASC actors at every paper session (even the EARLY ones).
• Watching worlds come together in Scott Kaiser’s keynote.
• The bear(s).
• Talking teaching.
• Tiff.
• Colloquies.
• Insights on our space in session X.
• The Banquet.
• Doreen Bechtol in everything she did, but espec
ially Lady M as played by Sarah Siddons (pregnant).
• Hamlet Conversation.

And so, a little over a month past the last day of the conference, I have a little time to reflect. A little time to look around at the people I work with, the place I work for, and thank heavens that, however it came to be, I landed here.

What will you remember?