Nowadays in America, we know today — the day before Ash Wednesday, 41 days before Easter — as Mardi Gras, a festival of extravagance and delight, with traditions passed down to us from the French and Italians. From the bayou to Rio, the Carnival season ends in a triumphant celebration of life and laughter, with parades, parties, fantastic costumes, throwing of beads, and yes, some degree of inebriation. 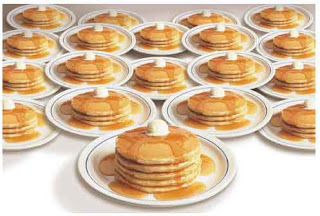 But for Shakespeare and his contemporaries in late-16th century England, this day was something different: Shrove Tuesday. And on Shrove Tuesday, you ate pancakes. Why pancakes? Because they involved many of the rich foodstuffs — sugar, fat, flour and eggs — whose consumption was restricted during Lent (which Anglicans still observed, despite the break with the Catholic Church). It was also a day to gorge yourself on meat and drink, to clear the larders of all those things you couldn’t eat during Lent and couldn’t afford to let spoil in the meantime.

This tradition is the subject of several scenes in Thomas Dekker’s The Shoemaker’s Holiday, where the apprentices of the City of London look forward to a great feast:

Firk: Oh brave! O sweet bell! O delicate pancakes! Open the doors, my hearts, and shut up the windows. Keep in the house, let out the pancakes. Oh, rare, my hearts! Let’s march together for the honor of Saint Hugh to the great new hall in Gracious Street Corner, which our master the new Lord Mayor hath built.

Ralph: Oh, the crew of good fellows that will dine at my Lord Mayor’s cost today!

Hodge: By the lord, my Lord Mayor is a most brave man. How shall prentices be bound to pray for him and the honor of the Gentlemen Shoemakers! Let’s feed and be fat with my lord’s bounty.

Firk: Oh, musical bell still! Oh Hodge, o my brethren! There’s cheer for the heavens: venison pasties walk up and down piping hot like sergeants, beef and brewis comes marching in dry fats, fritters and pancakes comes trolling in in wheelbarrows, lemons and oranges hopping in porters’ baskets, collops and eggs in scuttles, and tarts and custards comes quavering in in malt shovels.

Hodge: How now, mad lads, whither away so fast?

First Prentice: Whither? Why, to the new great hall. Know you not why? The Lord Mayor hath bidden all the prentices in London to breakfast this morning.

Firk: Nay, more, my hearts: every Shrove Tuesday is our year of jubilee, and when the pancake bell rings, we are as free as my Lord Mayor; we may shut up our shops and make holiday. I’ll have it called Saint Hugh’s holiday.

Hodge: And this shall continue forever.

Firk: Oh, eternal credit to us of the Gentle Craft! March fair, my hearts. Oh, rare!

As someone who has had the “oh, rare!” honor to play Firk in a production of The Shoemaker’s Holiday (directed by Casey Caldwell back in 2010, as part of his MFA), I can verify that this scene only works if you embrace its jubilant madness entirely — much in the spirit of Shrove Tuesday or its modern descendents. You have to let the good times roll over you and indulge thoroughly in the exuberance — and there’s something marvelously freeing about giving yourself over to that on stage.

But, as a scholar, I enjoy what this scene tells us about the historical celebrations: Firk gives a detailed menu, listing what the prentices can look forward to at their feast; the ringing of the bell to announce the holiday has historical precedence; and the freedom to “shut up shop” for the afternoon is likewise chronicled elsewhere. Dekker thus provides social historians with a glimpse into Shrove Tuesday’s place in the religious and celebratory calendar of early modern England. The tradition lives on — pancakes are still a typical Shrove Tuesday meal in many Anglican and Lutheran communities, and several cities in England still hold pancake races on the holiday.

So — Who’s up for some pancakes?