This evening, I’ll be conducting the Inside Plays lecture for The  Maid’s Tragedy, and I’ve decided to use it as an opportunity to discuss one of my favorite pet concepts: definitions of comedy and tragedy. 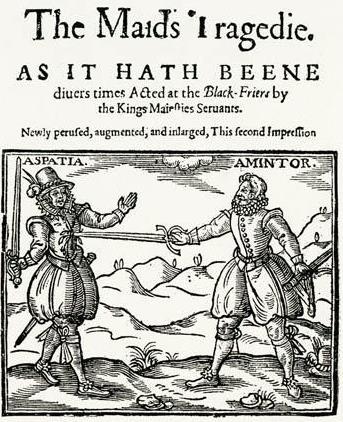 This all stems from a class I had with Professor John Morreall back in undergrad. We spent half the semester breaking down what makes something comic or tragic, then the second half applying those concepts to various religious worldviews. What I find particularly interesting, though, is how those concepts apply to early modern theatre. Despite our tendency to break Shakespeare’s plays and those of his contemporaries up into neat boxes labeled “Comedy”, “Tragedy”, and “History”, very few plays fit comfortably into those slots. Hamlet has plenty of funny moments, and Much Ado about Nothing has some real heart-rending moments.

The dichotomy is particularly noticeable in Beaumont and Fletcher’s The Maid’s Tragedy. At a glance, this is definitely what it says on the tin: a tragic play. All the characters seem hellbent on drastic actions, the fate of a kingdom is at stake, and by the final scene, the stage is littered with bodies. And yet, when I saw the play on its opening night, there was laughter. A lot of it.

Laughter can come from different places, of course, and I’m sure plenty of those laughs were nervous or awkward, a helpless response to the heightened emotions displayed on the stage. But I think there are some genuinely comic moments in this play, whether for their bawdy humor or their sheer absurdity. It’s not just a rollercoaster for emotions — it’s more of a yo-yo.

When a play presents such extremes, I like to go back to the same checklist I used back in Professor Morreall’s class. This list breaks down the biggest differences in the tragic-comic binary — convergent vs divergent thinking, focus on the spirit vs focus on the body, order vs chaos, etc. Analyzing a play, a character, or even an individual moment through this lens helps me see the often complex interplay between genres in early modern plays. Are there some characters with comic worldviews trapped in a tragic play? Are some of them so tragic, in such overblown ways, that it strains our capacity to sympathize and instead renders them comic? What makes us laugh in those funny moments — and how fast does the situation bring us back down, and why? And, most importantly, how can actors use that dichotomy and its attendant expectations to generate a variety of audience responses?