I’m pleased to announce that the Summer/Fall 2015 issue of the Playhouse Insider is now on-sale in the Box Office! Here’s a sneak peek at what’s inside: 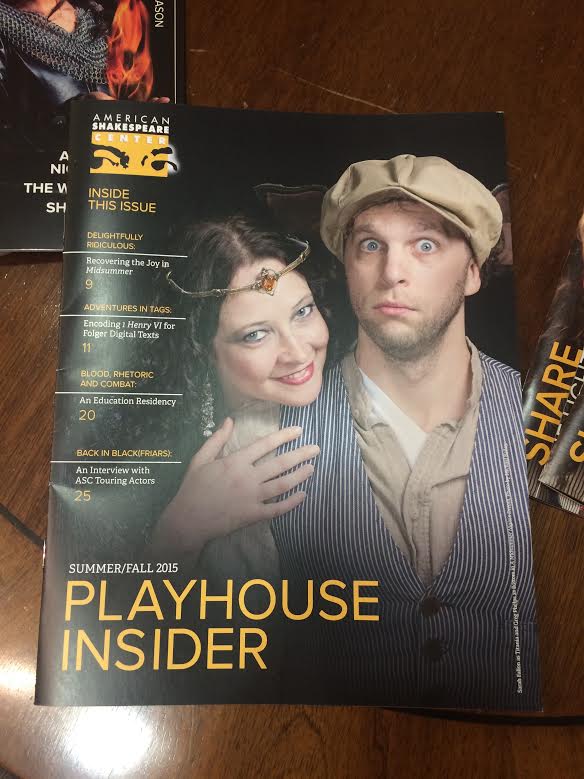 I’m delighted to have an article from Kate Powers, the last person to direct A Midsummer Night’s Dream for the ASC, back in 2011. While Midsummer is always a crowd favorite, Powers initially felt some hesitance to tackle the project – but rehearsing the show helped her find the same love we at the ASC hope you’ll feel for this year’s production.

In Matt Davies’s piece, you’ll hear from an ex-Antony in his own words. Davies played the role for the Chesapeake Shakespeare Company, under the direction of our very own Ralph Cohen. While Cleopatra often receives more attention as a famously challenging role, Antony comes with his own set of expectations and imaginings, and Davies will lead you through his exploration of them.

Finally, as our current tour prepares to embark on the first phase of their journey in September, I thought you would enjoy a look at what life on the road is like – and what it means to come home to the Playhouse. Patrick Poole and Lexi Braverman of last year’s Method in Madness tour share their experiences in an interview with Education Artist Lia Razak Wallace.

Our first scholarly article illustrates that, at the Blackfriars Playhouse, research and practice are always deeply intertwined. Amy Grubbs shares her observances from working on The Winter’s Tale as a member of Mary Baldwin College’s 2014-2015 MFA Company, Turning Glass Shakespeare.

I’m tremendously excited to offer an article from Michael Poston, a friend from the Folger Shakespeare Library. As technology continues to advance, editors across the world are engaging with new ways to present Shakespeare’s texts. Poston uses some examples from 1 Henry VI to illustrate the challenges of tagging a Shakespeare play for digital mark-up, and the result is a fascinating look at the underpinnings of early modern texts in the modern age.

With the 8th Blackfriars Conference coming up in October, we decided to showcase some thoughts based on a paper from a previous conference. Matt Kozusko’s article on humor in Hamlet is precisely the blend of sharp, amusing, and insight that we prize in the presentations at each biennial gathering, the topic Matt chose also offers a great transition from our Spring to Summer season..

We’ve just wrapped the 2015 No Kidding Shakespeare Camp, and in 2016, we’ll be taking the team abroad again. Find out what traveling to London to study Shakespeare is like from 2013 camper Lia Janosz – and learn why she considers Dr. Ralph the Indiana Jones of early modern theatre.

Finally, teacher Katrien Vance shares her experience – and those enjoyed by her students – in bringing ASC Education to her school for an exploration of Macbeth and Shakespeare’s Staging Conditions. From special effects to the nuances of rhetoric, her class dove into the work with great enthusiasm – and the pictures from their stage blood workshop are not to be missed!

If you’re interested in contributing to a future issue, please send me an email with your proposal: cass@americanshakespearecenter.com.