In 1954, a journalist named Edward R Murrow stood up against the bullying and intimidation of Senator Joseph McCarthy. PBS describes his famous broadcast like this: “Broadcast on March 9, 1954, the program, composed almost entirely of McCarthy’s own words and pictures, was a damning portrait of a fanatic. McCarthy demanded a chance to respond, but his rebuttal, in which he referred to Murrow as ‘the leader of the jackal pack,’ only sealed his fate. The combination of the program’s timing and its persuasive power broke the Senator’s hold over the nation.”

I was inspired to revisit Murrow’s speech recently, when one of our presidential candidates stated, “In the Cold War, we had an ideological screening test. The time is overdue to develop a new screening test for the threats we face today.” Remembering just what that ideological screening test was reminded me of the film Good Night and Good Luck, and that put me down this particular historical rabbit hole. Beyond the political resonance of Murrow’s speech, however, I was struck by the simple elegance of its rhetoric.

I decided to compare Murrow’s rhetoric to that of two of Shakespeare’s characters who we see in moments of speaking truth to power: Hermione at her sham of a trial and the Lord Chief Justice defending himself to the newly-crowned King Henry V. These are three very different speakers in three very different situations, but there are some strands of rhetorical similarities that perhaps reflect what is most persuasively potent in moments like these. To see the full speeches and my (scribbling) mark-up of them, click here.

In The Winter’s Tale, Hermione’s in a tough position, because she’s been dragged to court from childbed, while suffering a total breakdown of her entire world. It’s not surprising, then, that her speech is disordered. The device known as hyperbaton is what most of us would think of as “Yoda-speak”.

The bug which you would fright me with I seek.
To me can life be no commodity.
The crown and comfort of my life, your favor,
I do give lost.

When you encounter disordered speech like this, it’s often helpful to rewrite the sentences as normal syntactical order would have them — so, “The bug which you would fright me with I seek” becomes “I seek the bug with which you would fright me” — and then ask why the words don’t come in that expected order. What information is Shakespeare giving us through the disorder? What I find interesting about Hermione’s structure is that she places the predicate/object first, saving herself for later. Whether this is strategic or an effect of her distress is up to an actor, but it seems to reflect her dissociation from herself and her life.

Despite this disorder, there is still an underlying structure in her speech. Hermione testifies as to her losses: (1) “The crown and comfort of my life, your favor, I do give lost”; (2) “My second joy / And first-fruits of my body, from his presence / I am barr’d”; (3) “My third comfort, / Starr’d most unluckily, is from my breast… Haled out to murder”; (4) Myself on every post / Proclaimed a strumpet; (5)with immodest hatred / The childbed privilege denied… (6)lastly, hurried / Here to this place, i’th’open air, before / I have got strength of limit.” Her order is not precise; it’s broken not only with the aforementioned hyperbaton but with parenthetical statements and somewhat rambling descriptions. But the order is there. My sense is that you can feel in that underlying structure a woman trying to hang on, even through extreme turmoil. And it pays off.

Hermione seems to wrap up with fairly simple statement, including a blistering antithesis (the contrast of opposing ideas): “Tell me what blessings I have here alive that I should fear to die?” Something in her is still fighting through the despair, however; she gives us a telltale “But yet”, a phrase that almost always cues a shift in a character’s speech, and then launches into her longest thought in the speech. (My mark-up shows the breaks where each full thought ends).

Not life,
I prize it not a straw, but for mine honour,
Which I would free, if I shall be condemn’d
Upon surmises, all proofs sleeping else
But what your jealousies awake, I tell you
‘Tis rigor and not law.

It’s a tangled thought, with those qualifying parentheticals, but it lands strong. “Rigor and not law” is a wonderful antithesis, and Hermione follows this long thought with a strikingly simple one — her simplest in the speech, with no disorder, no augmentations, no diversions: “Your honours all, I do refer me to the oracle.” Out of her disorder, Hermione finds strength — and the will to speak that truth to the husband and king who wants her dead.

The Lord Chief Justice is similarly challenged to defend himself in public, when King Henry V demands he justify having imprisoned the king when he was still a young, carousing prince. The Lord Chief Justice (hereafter LCJ) speaks in longer thoughts than does Hermione, though their overall monologues are roughly the same length. He paints a picture at length, of Henry having his own son who might disobey him, and throughout the speech, uses language that consciously calls upon Henry to “imagine” what might be.

Like Hermione, he has an underlying listing structure to his speech, though he carries it to greater lengths. His speech is also highly ordered, rather than disordered; the LCJ calls upon the device of isocolon, parallel sentence structure, to drive his lists home, whereas Hermione’s were more scattered in their structure. Below, I’ve numbered the items in the list — each a similarly-structured verb phrase, wherein the LCJ calls upon Henry to imagine specific things:

If the deed were ill,
Be you contented, wearing now the garland,
(1)To have a son set your decrees at nought,
(2)To pluck down justice from your awful bench,
(3)To trip the course of law and (4)blunt the sword
That guards the peace and safety of your person,
Nay, more, (5)to spurn at your most royal image
And (6)mock your workings in a second body.

He then moves from this structure to the even more direct imperatives (a bold thing to use when speaking to a king):

(1)Question your royal thoughts, (2)make the case yours;
(3)Be now the father and propose a son,
(4)Hear your own dignity so much profaned,
(5)See your most dreadful laws so loosely slighted,
(6)Behold yourself so by a son disdain’d.

Like Hermione, the LCJ gives us a wonderful turning point with “And then” — where he finally turns the topic back to his own deeds, both past and potential. Throughout this speech, the Lord Chief Justice is speaking to save at least his job, perhaps his life, but that does not seem to rattle him. Though verbose, he is not disordered, and that insight may tell an actor quite a bit about who this character is. 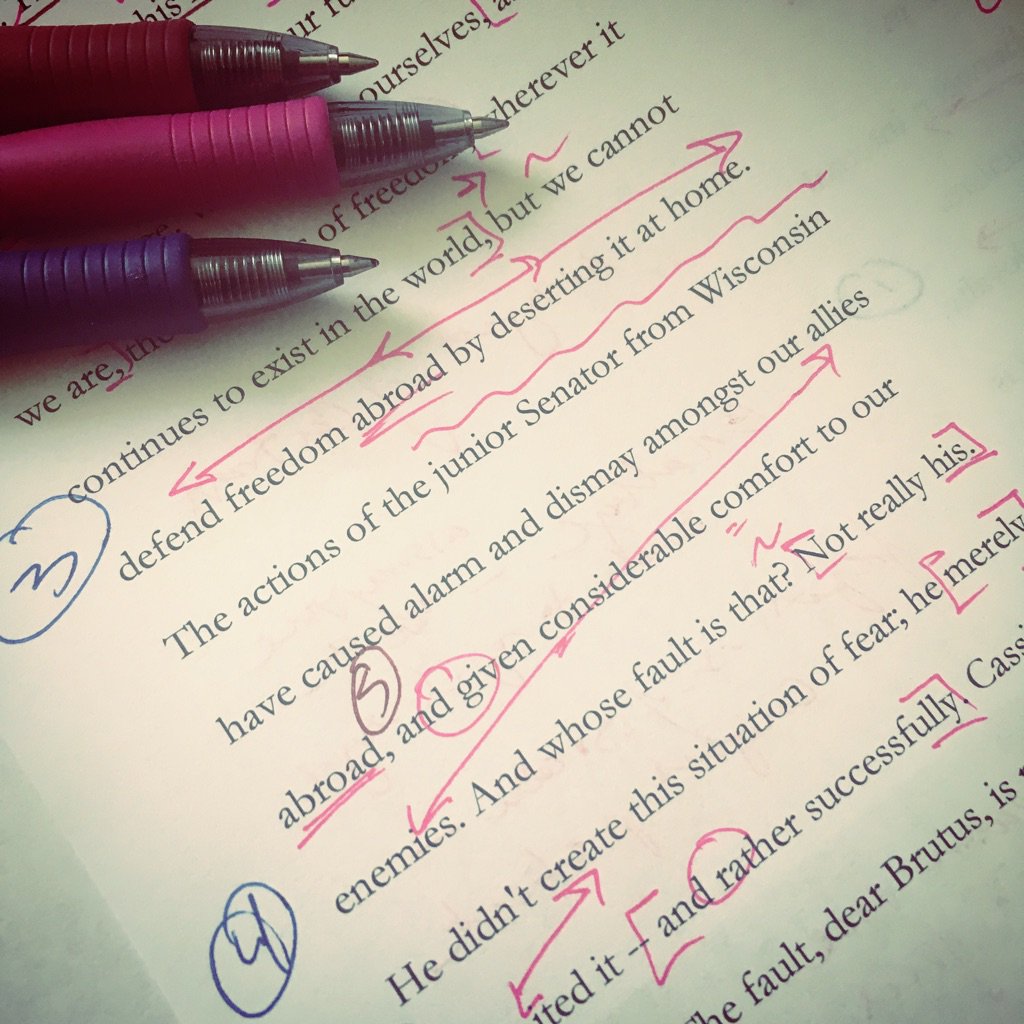 And so to Murrow:

Murrow’s dominant rhetorical trait at first glance is that of the double predicate (a simplistic form of zeugma, with one subject governing multiple verbs and objects). He also makes an interesting grammatical shift about one-third of the way through, moving from speaking in the abstract third person (“No one familiar with the history of this country can deny”; “It is necessary to investigate”, etc) to the first personal plural: “We must not confuse”; “We must remember”; “We will not walk in fear”; “We will not be driven by fear”. Murrow takes himself out of the ostensibly dispassionate, objective seat of the reporter and makes himself a part of the whole, which both personalizes the speech and encourages audience complicity in it.

Murrow also makes great use of antithesis, contrasting “dissent” with “disloyalty”, “accusation” with “conviction”, “oppose” with “approve”, “abroad” with “at home”, “allies” with “enemies”, and “create” with “exploit”. His lists are more spread out, but those contrasts in themselves provide the thrumming beat of structure that carries through the speech.

So what do all three have in common? Lists and contrasts seem to make for powerful points. Somewhat strangely, in all three examples I examined, the lists came in sixes — usually with some sort of grammatical patterning shift between the first three and the last three. The arrangement of contrast seems natural when speaking truth to power: the objective is to draw a line between what is and what is not, between the truth and the lie. The starker the contrast, the more successful the argument.

The thing that strikes me most, looking at all three speeches, is that the simplest statement, the least rhetorically embellished, always falls almost at the end of the speech. Hermione’s “I do refer me to the oracle”, the Lord Chief Justice’s “After this cold consideration, sentence me”, and Murrow’s “And whose fault is that? Not really his.” all have a punch-like quality to them. After using different strategies to lay out the situation, all three “put a button on it”, as we say in our Leadership Programs. They also then follow up with a call to action — something that turns the focus from the speaker to the listener. Murrow’s is perhaps the most interesting, because it is not stated outright as Hermione’s “Apollo be my judge” and the LCJ’s “As you are a king, speak in your state / What I have done that misbecame my place / My person, or my liege’s sovereignty”. Rather, Murrow turns back to Shakespeare himself to make his audience think about their complicity in evil actions: “‘The fault, dear Brutus, is not in our stars, but in ourselves.’ Good night, and good luck.”

Good luck with what? The phrase was Murrow’s standard sign-off, but it carries such weight following the speech he’s just given. Good luck re-examining yourself? Good luck enduring these circumstances? Good luck challenging power? Whatever it is, it’s something the audience has to carry forward with them.

And all three win, in the end. It takes longest for Hermione, but she is, eventually, vindicated by the Oracle and then, sixteen years later, by Leontes. Henry V embraces the Lord Chief Justice. And Edward R Murrow started a chain reaction that eventually brought down Senator McCarthy and his witch hunts.

In an age of constant media, it’s sometimes hard to tell where the truth, the deflections, the distractions, and the outright lies are in the public discourse — but sometimes, it’s not very hard at all. Whenever I give a rhetoric workshop, I tell students that one of the reasons I love it is because rhetoric makes you a better listener. Sometimes that’s about listening for how someone’s using rhetoric to try to fool you, but it can also be about listening for the person who’s speaking the truth that someone else doesn’t want you to hear.