Last week, in less than twenty-four hours, our country had the opportunity to experience two important political speeches: President Obama’s farewell address and Donald Trump’s opening statements to the first press conference he has held since last July. Both were prepared statements, though both appeared to involve some measure of ad-lib. Since President Obama’s farewell address was much longer, I chose to examine only a segment of it, of comparable length to Mr. Trump’s opening statement.

By the Numbers
Complexity and elegance in speech are not necessarily about sentence length or vocabulary level: they’re really more about variety. Does the speaker vary syntax? Does the speaker demonstrate a grasp of language’s fluidity and flexibility? Does the speaker use a wide or narrow range of descriptors? As Shakespeare knew, these traits create a character who is verbally facile and engaging. Going too far with them, however, can create a ridiculous character, such as Holofernes:

This is a gift that I have, simple, simple; a foolish extravagant spirit, full of forms, figures, shapes, objects, ideas, apprehensions, motions, revolutions: these are begot in the ventricle of memory, nourished in the womb of pia mater, and delivered upon the mellowing of occasion. But the gift is good in those in whom it is acute, and I am
thankful for it.

The gift is in knowing how to apply language deftly, which is not the same as the oratory onslaught that defines much of Holofernes’s speech. Then there are characters like Dogberry, who reach for verbal greatness but somewhat miss the mark:

LEONATO
Neighbours, you are tedious.

DOGBERRY
It pleases your worship to say so, but we are the poor duke’s officers; but truly, for mine own part, if I were as tedious as a king, I could find it in my heart to bestow it all of your worship.

LEONATO
All thy tediousness on me, ah?

DOGBERRY
Yea, an ’twere a thousand pound more than ’tis; for I hear as good exclamation on your worship as of any man in the city; and though I be but a poor man, I am glad to hear it.

Visualization
To help you get a sense of the “feel” of those numbers, I include two word clouds below, one for each speech. (These clouds also omit, as word clouds typically do, common grammatical words such as “the”, “a”, “with”, “on”, etc. I have, however, opted to include “and”, “that”, “very”, “our”, and “us” in both, as their usage seems to exceed commonality in a significant way).

By the Rhetoric
(Be ye warned: there are Greek terms within. But fear not! I promise to define all of them)

If you’re interested in the full rhetorical mark-up of each speech, according to our R.O.A.D.S. to Rhetoric, I’ve appended those at the bottom of the post (with apologies for my handwriting). I’ll just hit a few highlights to discuss overall patterns.

President Obama, as I’ve noted before, is prone to auxesis, the arrangement of a series. In fact, he may be slightly over-prone to it; sometimes his series nest within each other and stretch beyond the set of three that’s most harmonious for a listener. 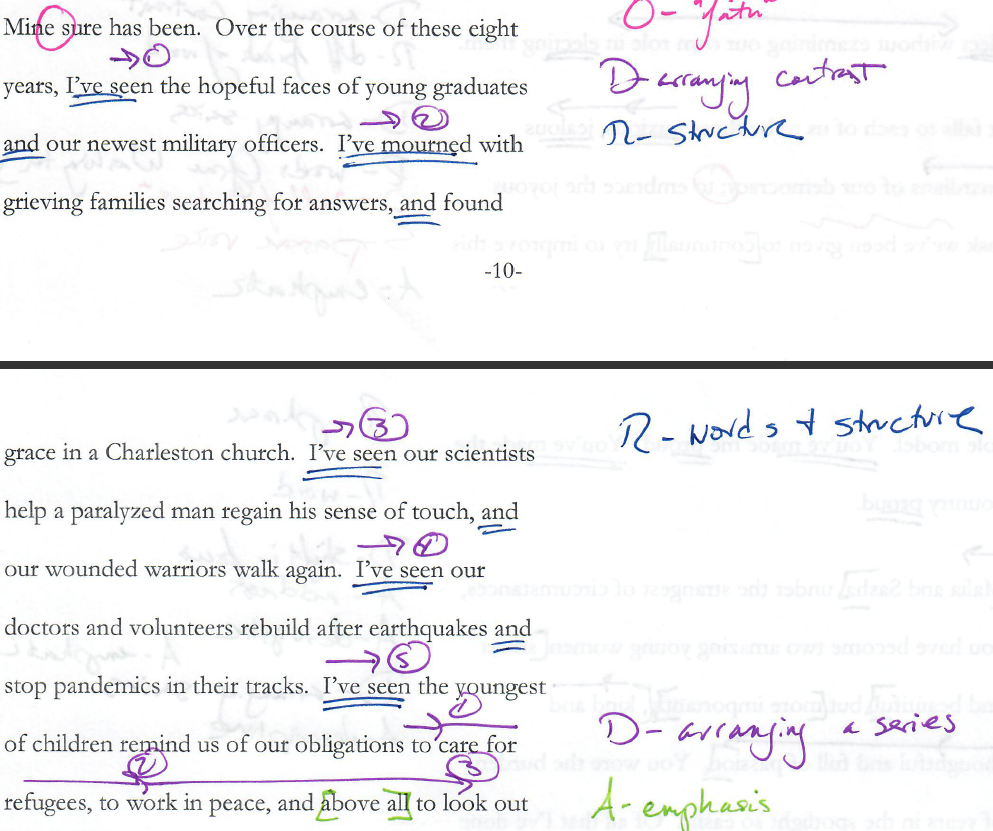 His other commonly used devices include:

These devices often interweave and support each other. Look at the following snippet, where the arrangement of a series coincides with repeated structure:

When we hear language used this way, whether consciously or not, we recognize the intention behind it. No one speaks like that accidentally. Auxesis and isocolon support each other particularly well: our brains appreciate parallel sentence structure on an almost subconscious level, and when that overlaps with the creation of a list, the speaker can carry us along with his story more easily. President Obama also often uses one device to segue into another — notice how, above, the use of “creed” at the end of his series carries through to his summarizing statement, which in turn shares syntactical similarity with the series. Compare these interwoven patterns to those in Richard II’s speech as he capitulates to his deposition:

I’ll give my jewels for a set of beads(1),
My gorgeous palace for a hermitage(2),
My gay apparel for an almsman’s gown(3),
My figured goblets for a dish of wood(4),
My sceptre for a palmer’s walking staff(5),
My subjects for a pair of carved saints (6)
And my large kingdom for a little grave(7;1),
A little little grave (2), an obscure grave(3)

The most commonly used rhetorical devices across Mr. Trump’s speech are: 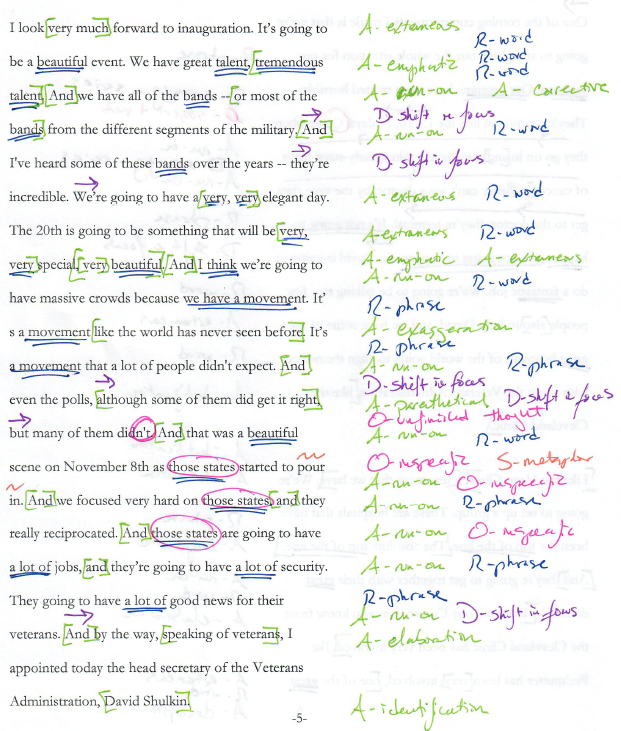 At first glance, the markup of Mr. Trump’s speech appears more rhetorically dense than President Obama’s, but it is worth noting that rhetoric is not always only about the words. Often, it is also about the delivery of those words, particularly in matters of emphasis, specificity, and intention. Silva Rhetorica discusses this when examining stylistic vices:

Every dimension or aspect of style has vices associated with it, and every vice has a corresponding virtue. Indeed, the very same locution may in one sense be regarded as exemplifying a stylistic virtue, and in another, a vice.

This distinction often becomes important in regard to devices of repetition, because the speaker’s affect lets the listener know whether the repetition was chosen or unchosen. Chosen repetitions can run the gamut of sounds, words, phrases, and structure. Consider, as I’ve noted before, the repetition of structure in Brutus’s funeral oration, or Antony’s repetition of phrases in his — or look at Edmund in King Lear, musing on the word legitimate:

Well, then,
Legitimate Edgar, I must have your land:
Our father’s love is to the bastard Edmund
As to the legitimate: fine word, legitimate.
Well, my legitimate, if this letter speed,
And my invention thrive, Edmund the base
Shall top the legitimate. I grow; I prosper:
Now, gods, stand up for bastards.

Edmund repeats the word to draw a contrast between the status it confers and his own bastardy. It is hard to imagine an actor performing these lines as though Edmund were not choosing that word in each instance, particularly since he uses with slightly different context each time, and “fine word, legitimate” indicates that he is thoroughly aware of the word’s weight and power.

Unchosen repetitions fall into the category of stylistic vices, including battalogia, the continual unnecessary reiteration of the same words, phrases, or ideas; tautologia, the unnecessary repetition of the same idea in different words; and homiologia, tedious or inane repetition. These devices might tell us much about a speaker’s overall verbal intellect or about their current emotional state. Consider Othello, overwrought with jealous suspicion:

Lie with her? lie on her? We say lie on her, when they belie her. Lie with her: that’s fulsome. Handkerchief: confessions: handkerchief. To confess, and be hanged for his labour. First, to be hanged, and then to confess: I tremble at it. Nature would not invest herself in such shadowing passion without some instruction. It is not words that shake me thus (pish): noses, ears, and lips: Is’t possible? Confess?handkerchief? O devil.

Immediately after this, Othello “falls into a trance”, elucidating that he is not in control of his physical self, and his words indicate that he is likely not in control of his intellectual and emotional selves, either. Those “lies” early in the speech might or might not be an intentional riff on the word, but the whorling repetitions of “handkerchief” and “confess” seem to have no definable pattern. They are disjointed thoughts to which Othello cannot seem but help to return.

Other stylistic vices involve figures of addition, such as:

Is that run-on sentence deliberate or accidental? I have no idea. It’s a choice for the actor to make, and it’s going to create a different character depending on which way it goes. Is Fluellen rambling, absorbed in his own musings and oblivious to the effect on his listeners? Or does he use those conjunctions and parentheticals intentionally, so that no one interrupts him, thus keeping him in control of the scene? Either choice could be correct, but much depends upon the delivery.

More rhetoric is not necessarily better rhetoric.
We’ve looked before at Claudius’s rhetorically dense and nigh-incomprehensible speech in 1.2 of Hamlet, which I think is as good an example as any in Shakespeare of the maxim that density of rhetoric is not necessarily a virtue. It may be overblown — the vice of macrologia refers to excessive wordiness in an attempt to appear eloquent — or simply inept, as in aschematiston, which may refer to either the unskilled use of figures of speech or starkly unornamented language. As with so many things in life, in speaking, balance is key, lest the speaker turn a virtue into a vice.