In my most recent blog post, I reviewed “The Nerdy Book Club’s” December post “Ten Books to Introduce Kids (of Any Age! Adults, too!) to Shakespeare.” (And I’ll be continuing the series in my next three posts). Last time I looked at The Fool’s Girl by Celia Rees and King of Shadows by Susan Cooper. This one will look at Warm Bodies by Isaac Marion and Street Love by Walter Dean Myers. The creator of the list of ten introductory books, Andi Diehn, says that both of these books can be used to introduce kids (of any age!) to Romeo and Juliet. Unfortunately, both of these books imagine poor facsimiles of Shakespeare’s star-crossed families, neither book really follows Shakespeare’s plot, and one was (dare I say it) better as a movie.

You will rarely hear me suggest this to anyone, but you could probably just skip Marion’s book and watch the movie (the two “movie is better than the book” exceptions which prove the rule are Forrest Gump, which is a rotten book and Big Fish because the movie is just better). I guuuuuuuuess Marion’s book is like Romeo and Juliet in that there are two characters who fall in love who probably shouldn’t, because the narrator and main character of the story, “R,” is a zombie and the bad-ass, post-apocalyptic teen-rebel without a cause, Julie, is alive. Other than similar names for many of the characters, that’s really where the plot comparison ends. 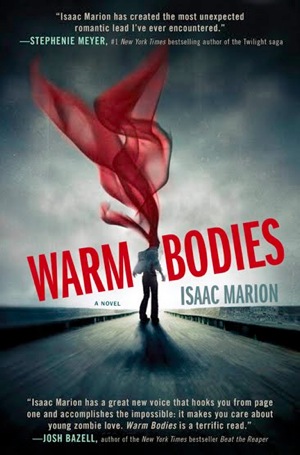 R is a zombie who is progressing (regressing? reversing? reincarnating?) back to being alive. He has comprehensive thought, can mumble a few syllables, can control his blood lust for brains, dreams, has memories, and, most importantly, falls in love-at-first-sight with Julie Grigio, “Julie Cab” to her friends, because she “just seemed more like a Cabernet.” Julie and R meet when R and his best friend, “M,” ambush Julie’s scavenging team and R kills Julie’s then-boyfriend, Perry, and brings her back to his home where they bond over Frank Sinatra and a sympathy to the permanently-youthed zombie children. There are other zombies that develop similar advancements to R’s, but at a slower rate. Comparatively, those that have decayed too far, known as “boneys,” focus only on recruiting and training “fleshies” to fight the living to ensure the presence and growth of the zombie population. Eventually, Julie goes back to the Stadium, a city built inside of an abandoned sports stadium, and R follows her and sneaks in. That’s about it as far as Shakespeare’s plot goes. There are a couple fun moments of similarity – when R observes Julie talking to herself about having met him and what difference does it make anyway that they’re different, and when her best friend Nora reveals that she is studying medicine to become a nurse – but nothing else.

Ultimately, I wouldn’t recommend this book as a Shakespeare substitute. However, this book does have a lot of other great themes about diversity and discrimination and how those things can cause cruelty in our world. So if you’re looking for a strange mash-up of a little more than a cliche love story and a traditional zombie thriller, than go ahead and give Marion’s book a shot. Even though the plot of this book doesn’t really collate with the plot of Shakespeare’s play, Marion created fun supplemental reading that is unexpected and imaginative. 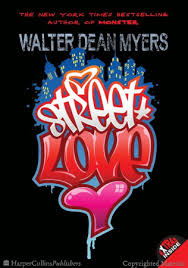 Walter Dean Myers is an important children’s author and poet who dedicated his career to creating and representing diversity in children’s lit. Myers’s website says that he was responding to the unfortunate statistic that even though about half of American children are a race other than white, fewer than 10% of children’s books published in 2013 were about minorities. His biography also claims that he has “won more awards than any author for young adults.” While Myers is undoubtably a significant and prolific presence in children’s lit and I think his works are wonderful suggestions for readers of any age, I am not sure why this book is included in this list. This stylized, blank-verse narrative has nothing to do with Shakespeare. Diehn justifies Street Love’s inclusion in her list with the blurb “Two kids from opposite sides of the socioeconomic tracks fall in love and despair at ever being accepted together. Sound familiar? Romeo and Juliet are reborn amidst the street sounds of Harlem and it’s edgy and beautiful.” To which I reply, “No… that does not sound familiar.” Mostly because while Myers gives us two teens from different socioeconomic backgrounds, Shakespeare gave us “two households both alike in dignity.” People always seem to think that Romeo and Juliet’s families were of different statuses, which is not the case. The Capulet’s have fancy parties and a daughter eligible for a Count and kinsman to the Prince. Meantime, Romeo spends all of his free-time with another royal kinsman, Mercutio. Both the Capulets and the Montagues are equally wealthy. Secondly, the families in Street Love aren’t feuding. There is a character who picks a fight with Damien (Myers’ supposed Romeo substitute), but he has no connection or relation to Junice (“Juliet”) at all.

Although I would absolutely never ever recommend this book as an introduction to Romeo and Juliet, or even as supplemental material, I would recommend it as lovely poetic narrative. Myers’ poetry is beautiful and his elegant internal rhymes make this blank-verse narrative soar. But it ain’t Romeo and Juliet.

Next time! Ophelia by Lisa Klein and The Cake House by Latifah Salom