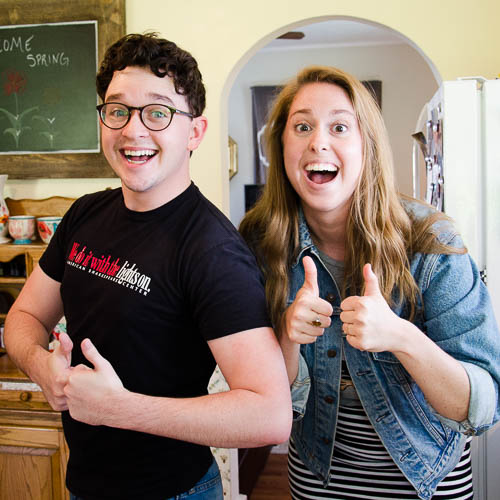 At the ASC, we recover the joy and accessibility of Elizabethan theatre, but today we’re on a mission to find out if the Elizabethan kitchen is worth recovering too!

We’ve got ​​a 1658 recipe (found here), turned our baking brains on, and watched enough Great British Bake Off to figure this out.  The recipe is pretty vague, so we’ll probably try out some variants and see what works best.

Take a pound of ſugar finely beaten, four yolks of Eggs, two whites, one half pound of Butter waſht in Roſe-water, fix ſpoonfuls of ſweet Cream warmed, one pound of Currans well pickt, as much flower as will make it up, mingle them well together, make them into Cakes, bake them in an Oven; almoſt as hot as for manchet, half an hour will bake them.

Jeremy looks it up and finely beaten sugar is probably just sugar.  Powdered sugar was called “white powder” which sounds like cocaine and we didn’t have time to buy that. 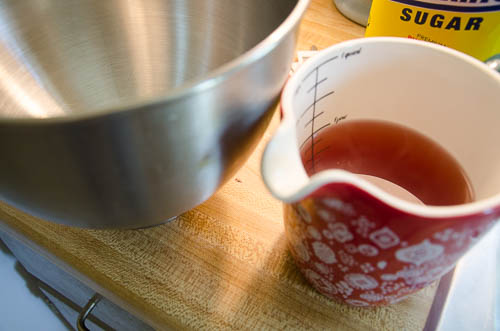 We’re making rosewater (don’t tell the neighbor but we clipped her rose bush) because we couldn’t find it at a supermarket anywhere near us.  Turns out rosewater is exactly what you’d think it is and super easy to make at home (and useful to keep around!). 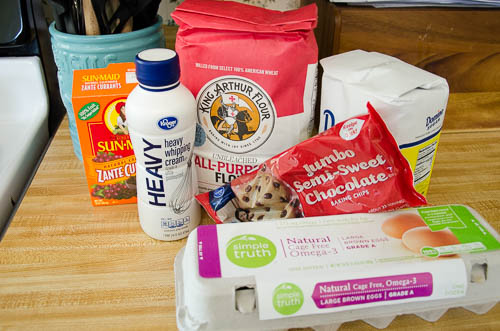 We actually found currants at the supermarket (no indication as to whether or not they’re “well pickt” though)!  We got chocolate chips too because YOLO.   Jeremy says the currants just taste like raisins.  Beth disagrees.  To her, they’re a “weird, tiny raisin.”  Fundamental difference.

Neither of us feels entirely confident about the order of ingredients.  Beth feels like this is probably an “all in one/mix it all together” type thing but Jeremy feels like the butter and sugar should be creamed first.   We go with Beth’s instincts.

Some Notes on the Process, Measurements, and Temperature 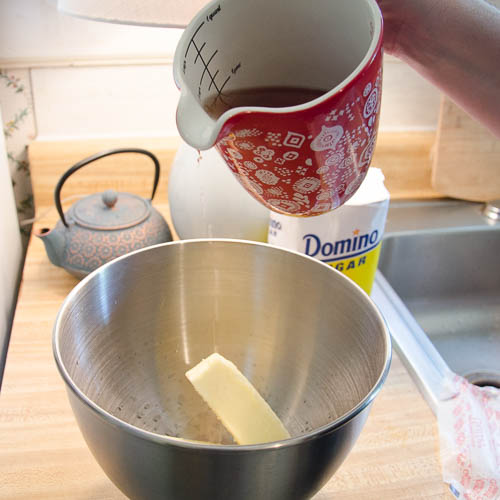 What does being “wafht” in rosewater mean?  Should we rinse the butter in rosewater?  We opt to  add just a couple of tablespoons and mash it together.

We used Google to figure out how much a pound of sugar is, but you could also use a kitchen scale or just guess!

We used a tablespoon for a “fpoonfull.” 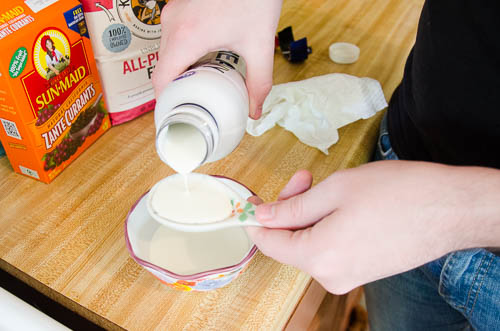 There’s no set cooking temperature and we have no clue what a “manchet” is or how hot it should be baked.  We preheat at the tried and true 350°F.

Anyone trying this recipe at home should definitely experiment with all of the above.  We want to hear how it turns out. 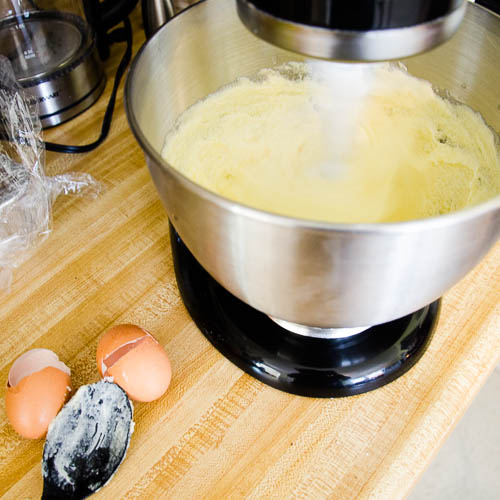 Then we used Ye Olde KitchenAid mixer to “mingle” sugar, butter, flour, cream, and eggs because our peasants were busy in the fields.  We looked up some other recipes which instructed the reader to beat for a full hour.  We’re not about that.  KitchenAid to the rescue!

“As much flower as will make it up” – what the heck does that mean?  We’re going to attempt multiple flour combinations to see what gives us the best (i.e. least terrible) result.  But, let’s get real, with butter, sugar, and eggs, it will probably taste good.

We start off with just two cups of flour.  The consistency resembles more of a thick batter, so we’re baking it in a muffin tray to see what we get. (Say hello to our assistant, Sunny.) 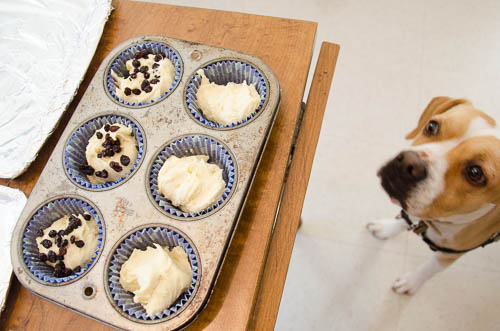 Then, we add more flour, probably a cup and a half but at this point we’ve ditched the measuring cups.  Jeremy calls it a very “tacky dough” and the dough yelled “YOU’RE TACKY LOOK AT THAT SHIRT.”  We decide these are best as a typical drop cookie. 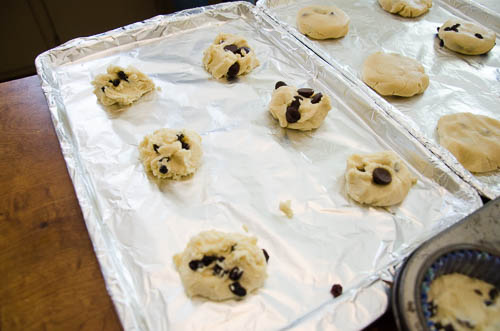 Another cup and a half (ish?) of flour, and the dough resembles shortbread – crumbly, but still holds it’s shape.  All tackiness is gone!  We press these into small cakes and we’re ready to go! 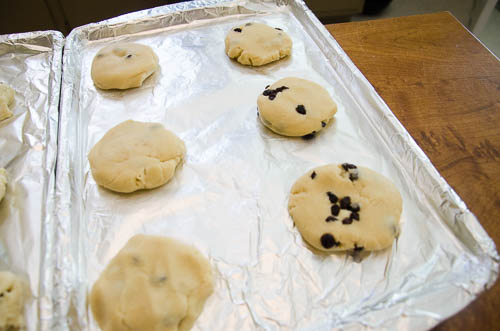 We don’t really trust the recipe’s suggested guideline of thirty minutes, so we’re going to check them every 10. 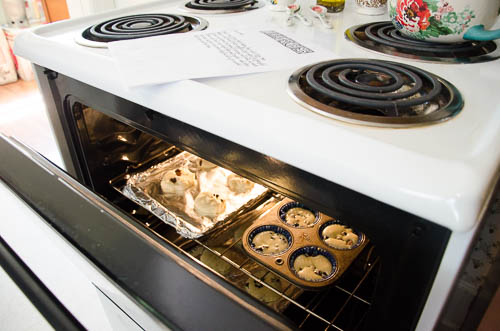 10 minutes in and they’re looking pretty good.  Still got a way to go!

20 minutes in and batch two are ready to come out.

22 minutes and and batch three are good to go.

30 minutes and batch one is looking good.

These are by far the most “cake”y by modern standard.  They’re light, fluffy, and buttery.  The lack of any kind of extract or zest makes them taste kind of plain, but the rosewater comes through nicely on the finish.  (Also, we totally know muffin papers aren’t historically accurate.) 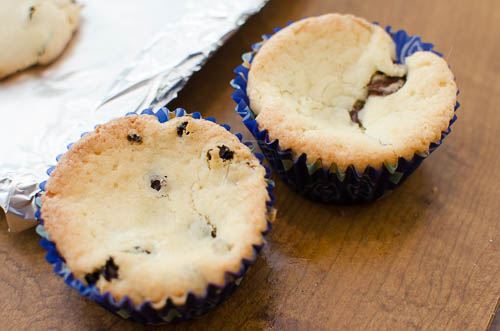 Beth says this batch tastes like cream of wheat.  Jeremy has never eaten cream of wheat so he can’t agree or disagree.  She grabs a chocolate chip variety and – “Oh my god those are so much better.  God I could put those away.  I’m so hungry.”  The rosewater isn’t coming through on this batch at all, probably because the extra flour has neutralized it.  All in all these are pretty underwhelming. 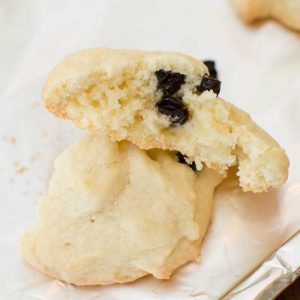 This batch is dry as bones.  They’re decent enough to eat fresh out of the oven (meh but edible).  But after cooling for a little over an hour they’re hard as rocks.  Don’t even try these in your home.  Stick with 1 or 2. 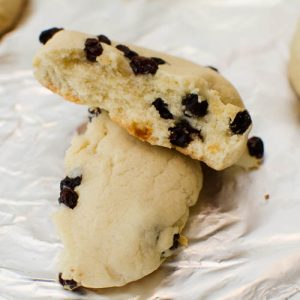 Moral of the Story

Baking is fun!  Eliza-baking is like a riddle, with a pinch of myftery, and a dab of rosewater.  We learned that the modern advances in baking are truly magical, but that these Elizabethan bakers could make a truly tasty cake.