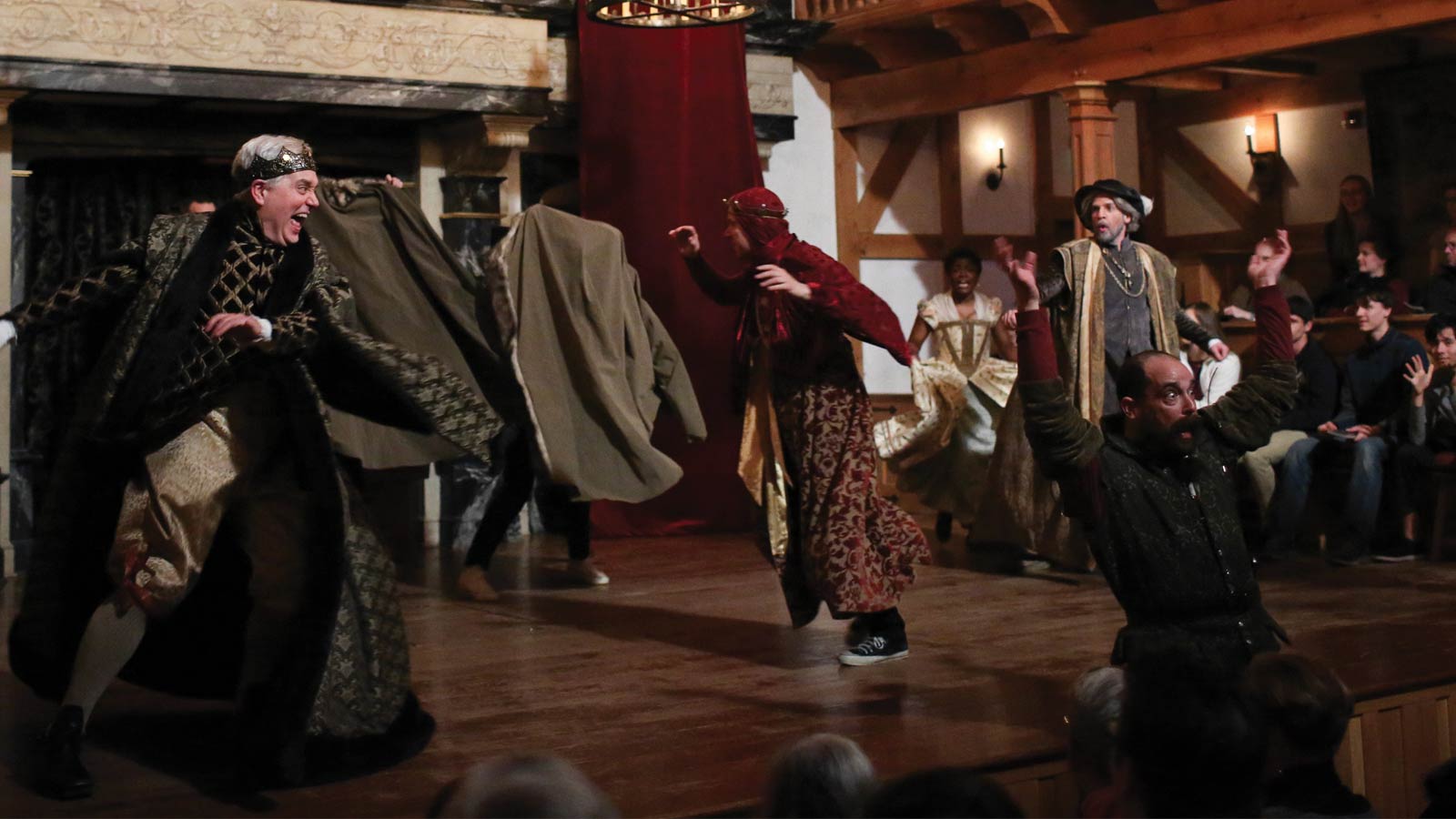 Shakespeare’s New Contemporaries is a revolutionary undertaking, but the plays that come out of the project will not be the first plays to engage with Shakespeare’s canon. To encourage our audiences to think about the ways plays can speak to each other and to get them excited for SNC, the 2017-18 Artistic Year has included two SNC-like pairings of contemporary plays with Shakespearean counterparts: Hamlet and Tom Stoppard’s Rosencrantz and Guildenstern are Dead during the recent Actors’ Renaissance Season and Macbeth and Bill Cain’s Equivocation now playing through June 9th.

If the response thus far is any indication, audiences are eager to witness all of the highlighted themes, the differing perspectives, and the performance commonalities that are offered by putting Shakespeare plays in rep with contemporary works. We asked a few audience members to reflect on their experience seeing Hamlet and Rosencrantz and Guildenstern are Dead together in repertory.

Emily Townsend especially enjoyed the casting of the same actors across the two plays and recommends that a Shakespeare play and its companion be seen in the same day if possible.

“When the two are paired in rep, and audiences can see those Hamlet scenes played exactly the same way, it really sells the audience on the idea that we’re seeing two sides of the same coin (I know…). I was delighted watching John Harrell and Chris Johnston’s first scene in Hamlet played [so similarly to the given circumstances that are established by Rosencrantz and Guildenstern…]. It was subtle, but it was there, and it felt magical. You miss out on that special magic when you don’t pair them up in rep,”

“Although they are very different plays, they explore different sides of the same coin (so to speak). While Hamlet is agonizing over taking action, Rosencrantz and Guildenstern face an even greater existential dilemma and aren’t sure that they can take action, even if they want to. The Stoppard play, which dwells so much on fate and destiny, draws my attention to those issues in Hamlet.”

Both Hamlet and Rosencrantz and Guildenstern… were familiar to Lia Fisher-Janosz before she joined us at the Blackfriars, but she had never before seen the two plays performed in rep.

“Seeing them together in repertory was at once dynamic and devastating, and ultimately more thought-provoking and satisfying. Perhaps the most important difference between the plays is point of view–or, if you will, the lens through which the audience sees the play and its action and thus comes to perceive the characters of Rosencrantz and Guildenstern. The nigh-perfect, impeccably-timed, finely-drawn performances by Chris Johnston and John Harrell served to display the contrast wonderfully, and aroused a great deal of empathy and sympathy alike. A number of qualities join the two plays. Both works pay homage to the wonders of language: meaning, humor, communication, emotion, power, and more. In speaking of meaning, then themes must also mentioned. Both plays deal with life and death, and explore the point and pointlessness of each. Both revolve around questions big and small: To be or not to be? Heads or tails? (…and who’s to say which of these is the more important question?) Both involve the search for one’s purpose and place within the world and without it.

Was I aware of these things before I saw the two plays, played by the same splendid ASC cast, within less than 24 hours of one another? Some of them, a wee bit; but let me state that all of this was brilliantly and clearly brought to light in repertory. To see the characters and the plays relating to each other, and to themselves, was stirring, sparking heart, mind, emotion, thought; and the conversation between them was one on which it was a distinct pleasure to eavesdrop. ”

Hamlet and Rosencrantz and Guildenstern… closed earlier this year, but audience members can still prepare for the coming Shakespeare’s New Contemporaries pairings with Macbeth in repertory with Bill Cain’s Equivocation.

Says Townsend, “Putting two plays in repertory will really help bring out the ways that the new play is in conversation with Shakespeare’s original, and let the audience feel those resonances. Each play will give us a new frame and a new means to have that conversation, and I look forward to discovering how they sound in duet.”