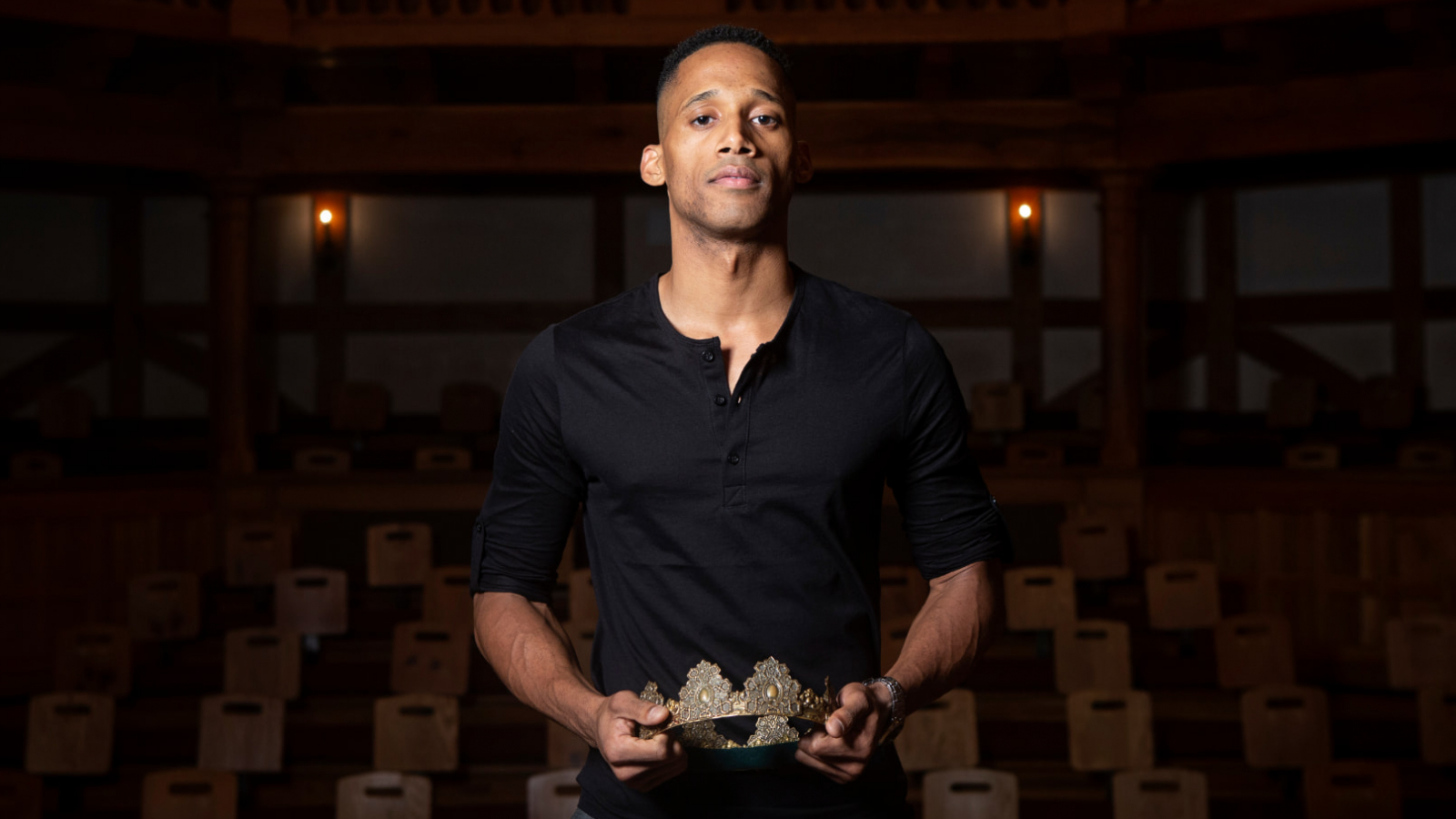 I’m a native of Virginia: born in Fairfax and raised in the great Northern Neck of Virginia in Heathsville. Working at the ASC was a dream of mine since high school.

This is my first Ren Season! l just condensed my normal process since there is limited time. So, really focusing on devouring the text to find things that inform my characters, finding what other characters say about my characters, finding specifics about what is happening and what the action is in each scene, and lines, lines, lines. This is also a highly collaborative environment, so not being married to the prep, but flexible and open to what might change when you get in the room in the moment.

Prince Hal! The quest of finding out who the hell “Hal, Harry, Harry Monmouth” is, is quite a gift. So far, our research shows that I will be the first African-American male, in the US, to play Prince Hal in Shakespeare’s Henry IV, Part 1*. I’m excited to share what my Prince looks like: that someone kindred might see themselves in my Hal, a Shakespeare buff might understand it in a different way, or how about this—that this might be the first production a kid ever experiences and this is the reference point! That’s how we change the game and place that metaphorical dynamite in the foundation of “what should be”. I think continued representation on stage is vital to actors of color becoming routinely cast as Hamlet, as Feste, as Lear. It’s crazy to think that we still are in 2019 and I can rabbit hole all the way back to Richard Burton (who played Prince Hal) and not find a Hal that looks like me.

What should people expect when they come to see this season? Any insider tidbits to look for?

In all the shows, people will get to see us unfiltered. Everyone has an opportunity to shine and do their thing—individually incredible, together unstoppable.

We get to put up the first ever SNC play, Anne Page Hates Fun. It will be the only directed piece in the season and will be an awesome, first-time experience for us all. Rock and roll.

That we are out here in VA doing “Shakespeare in tights”. There are tights, yes, but the focus is the work. There is a constant reminder that all you need is the words, interest, and an open space to create something really special. Don’t sleep on the ASC: We have some of the best scholars and artists, in the world here, delving into Shakespeare (and the classics) in new and interesting ways. We all bring our own flavor to the soup and, boy, is it tasty.

“The Bear” is our (unofficial) mascot within the company. (The Bear from The Winter’s Tale, that is.)

“Let’s Go, Bears!” Say it loud and proud when you see someone from the ASC!

*Editor’s note: For this claim, we specifically looked at the character of Hal in Shakespeare’s Henry IV, Part 1, rather than conflations. René Thornton Jr. also played Hal at the ASC in a 2004 production of The Most Lamentable Comedy of Sir John Falstaff, a conflation adapted by Ralph Alan Cohen.

While the casting was done long before any of this research, a lack of diversity on Shakespeare stages is a field-wide issue, and we are glad to engage in conversations like this one.

Regardless of if additional research shows Brandon Carter to be the first, fifteenth, or fiftieth African-American male to play Hal in Henry IV, Part 1, we are delighted to see what he brings to the role.