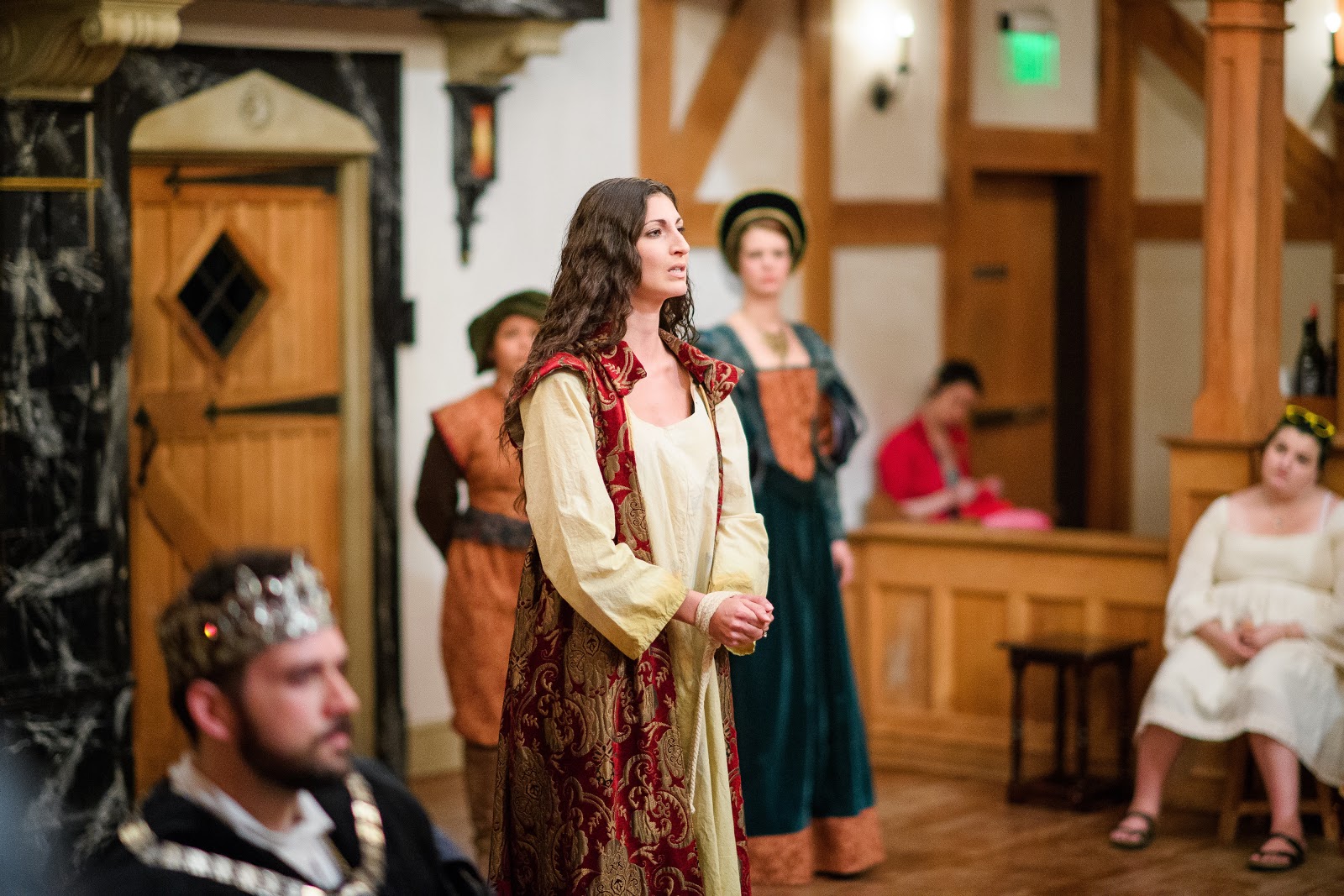 “Since what I am to say must be but that which contradicts my accusation, and the testimony on my part no other but what comes from myself, it shall scarce boot me to say ‘Not guilty’. Mine integrity, being counted falsehood, shall, as I express it, be so received.”

When read as prose, this opening statement from Hermione in Shakespeare’s late romance, The Winter’s Tale, sounds an awful lot like other testimony women have been forced to give on the public stage in recent history. It echoes Anita Hill’s solemn resolve: “It would have been more comfortable to remain silent. It took no initiative to inform anyone-I took no initiative to inform anyone. But when I asked by a representative of this committee to report my experience, I felt that I had to tell the truth. I could not keep silent.” It resonates with Dr. Christine Blasey Ford’s doubt: “I am here today not because I want to be. I am terrified. I am here because I believe it is my civic duty to tell you what happened to me while Brett Kavanaugh and I were in high school.” It channels the outrage in the statement made by rapist Brock Turner’s anonymous victim: “I was not only told that I was assaulted, I was told that because I couldn’t remember, I technically could not prove it was unwanted. And that distorted me, damaged me, almost broke me.”

While Hermione is not the victim of sexual harassment or assault like the other three, all these women suffered the indignity of being blamed for what happened to them, the people in power put their integrity on trial and smeared their characters for having the audacity to speak out. Their word alone is not enough to sway public opinion, but they “screw [their] courage to the sticking place” and speak anyway.

Too many women know the feeling of walking into a room filled with powerful men predisposed to question their credibility simply because they are women. Shakespeare, who lived most of his life as the subject of a powerful queen who openly defied patriarchal expectations, may well have crafted his theatrical queens to reflect his real-life role model. At the very least he provides many of his characters, male or female, with a dexterity in rhetorical argumentation. One such queen is Hermione, accused of adultery by her husband, Leontes. She faces the daunting task of defending her reputation against little more than the king’s suspicions and insinuations; his words carry more weight in the court of public opinion than perhaps they should. While Leontes has the luxury of venting his inarticulate fury at every opportunity and expecting to be believed, Hermione must carefully construct her defense so as not to appear hysterical*; to voice her unfiltered grief and angst would confirm the stereotype of the “emotional, irrational woman” governed by passion, a pernicious double-standard of women’s behavior that persists to this day.

In circumstances like a trial or other testimonial forum, female witnesses like Anita Hill, Christine Blasey Ford, and even fictional Hermione, often have to devote the bulk of their time to establishing their credibility before moving on to addressing the immediate issue at hand, i.e. their trauma. In rhetorical terms, this is what is known as an ethical appeal, which Shakespeare would have learned in grammar school, along with the other elements of persuasion, logos (logic) and pathos (emotional appeals). All three real-life women cited above employ this ethical tactic in their statements. They take pains to describe their family, relationships, careers, even their behavioral habits, before launching into accusations. Hermione’s testimony at her trial begins with a similar ethos:

You, my lord, best know
Whom least will seem to do so my past life
Hath been as continent, as chaste, as true,
As I am now unhappy…
For behold me
A fellow of the royal bed, which owe
A moiety of the throne, a great king’s daughter,
The mother to a hopeful prince[.]

She ensures that Leontes and the entire court remember her nobility of birth, her position in the court, and her spotless reputation before alluding to the allegations that brought her there. The more she can do with her language to remind her listeners of her sanity and clarity, the better.

Ethos confirmed, she dares to engage the emotions of her listeners – their pathos – toward the end of her argument, though still displaying her own careful restraint. Too often victims at trial also have to justify their reticence to speak out sooner or their inability to defend themselves in the moment – an unfair standard, given the paradoxical expectation that women will be politely accommodating at all times – but one that is nonetheless evocative for any listeners who can relate to their situation. Consider Hill’s “It is only after a great deal of agonizing consideration that I am able to talk of these unpleasant matters to anyone except my closest friends”; and Ford’s “Brett’s assault on me drastically altered my life. For a very long time, I was too afraid and ashamed to tell anyone the details”; and the anonymous woman’s “You have no idea how hard I have worked to rebuild parts of me that are still weak. It took me eight months to even talk about what happened.” Compared to these, Hermione’s “Lastly, hurried / Here, to this place, i’th’ open air, before / I have got strength of limit” rings truer to our 21st century ears than perhaps we want it to, her struggle to appear before and confront her accuser as utterly relatable as it is tragically futile.

Shakespeare, of course, could not have foreseen that 400 years later women would still be fighting the battle to be believed rather than blamed and vilified, but he clearly knew enough about gendered expectations to write women like Hermione who take immense care to speak logically and demonstrate their credibility before venturing into emotional appeals. In reflecting on Hermione, who so eloquently speaks truth to terrifying power 400+ years before her real-life counterparts, we have an exquisite example of how far women have come, and, in many ways, how infuriatingly little has changed.

For a break-down of Hermione’s speech in Act three, scene two of The Winter’s Tale, and a lesson plan for teaching rhetoric, subscribe to our Education Newsletter!

Visit our gift shop to pick up a deck of our ROADS to Rhetoric Flashcards.

Intrigued and want to dig deeper into Shakespeare’s women? Join our upcoming Teacher Seminar May 17-18.

*From the Greek “hustera” or “womb”. Even the label for this behavior reflects on women in negative ways.

Aubrey spreads the educational philosophy of the ASC as a full-time education artist. In the summer, she works as the Camp Life Coordinator.