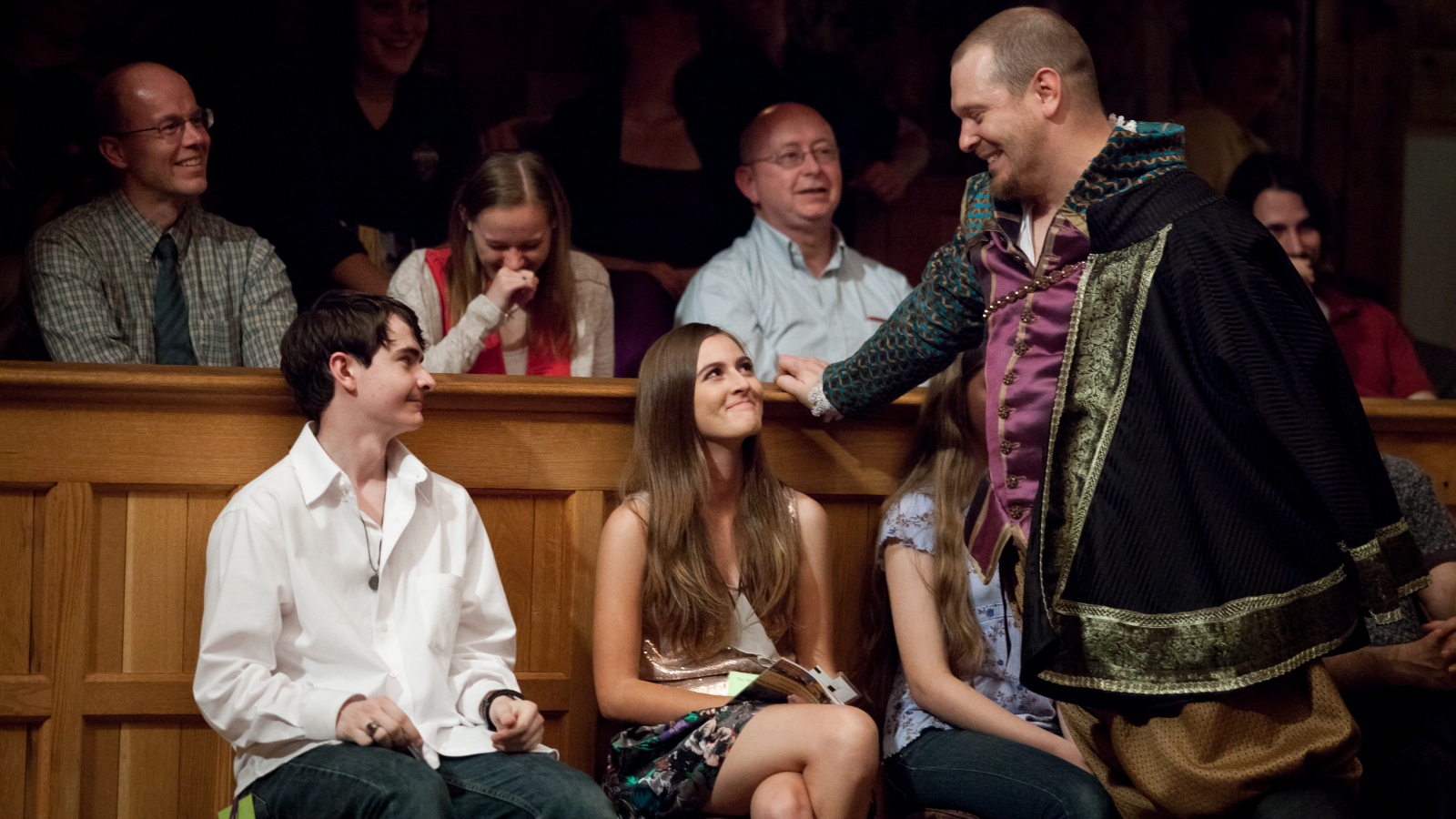 Theatre is about connection. In connecting to the lives of fictional others represented onstage, we in the audience discover truths about ourselves. We hold a mirror up to nature so we can reflect on that nature, and in so doing we decide what matters (which is why seeing yourself represented onstage is so important).

Humans crave connection. We are, after all, social creatures. Our brains don’t simply thrive in the company of other brains, they actually require that company in order to function. The human brain wires (and re-wires) in response to experience, and much of the human experience involves interacting with other humans. After all, we are rather useless physical specimens when compared to some of our brethren in the animal kingdom: our skin is easy to pierce, we barely have nails anymore (let alone claws), we can’t see very well or very far, we can hardly smell anything — in pure survival terms, a lone wolf or an irritated kangaroo could easily take me in a one-on-one fair fight, which will never be in a one-on-one fair fight with either of those creatures. I will use the advantages nature bestowed upon humans and call in the backup of my fellow man in order to deal with sturdier creatures, and our ability to do just that — form the complex social relationships with other humans that allow us to work together towards our shared goal of survival — is what gives humans the evolutionary edge over our furrier friends. We have society, and like the ant in its colony we are able to do much more together than we ever could (or should) alone.

Language is a bedrock of society and a boon to communication. It has its pitfalls (we don’t all speak the same one; some of us do not speak at all) but the value of the Word cannot be overstated. Theatre arguably owes its life to words, and a Kendrick-Lamar-obsessed Shakespearean like me cannot choose but care deeply about words and wordplay. And yet, despite Biblical passages to the contrary, the Word was not first. We did — and do — communicate without language, and the heart of my message lives in the nonverbal communication of direct, mutually sustained eye contact.

I am the eye contact lady. I wrote my first Master’s thesis on the neurological effects of actor-audience eye contact in a theatrical setting, and to summarize that 60-page document for you, the effects exist and are profound. As social creatures whose brains are wired through experience, we learn early on (arguably within the first month of life) to pay preferential attention to the faces of others, and specifically to gaze. Gaze direction is a juicy hint towards intention, and sussing out another person’s intention is the crux of the uniquely human activity of “mentalizing” — attributing to another person a whole inner life of emotions and experiences and opinions totally separate from your own. Mentalizing is the basis of empathy, and without it we are less than human: a lack of of empathy is a hallmark of the terrifying and poorly understood antisocial personality disorder better known as psychopathy.

Eye contact communicates presence, availability, and the desire to connect. It is unmistakable and undeniable. If you are looking at me, you know when I am looking at you. If I am looking at you, I know when you are not looking at me. When we’re looking at each other, our eyes must meet for at least the briefest of moments in order for that mutual availability to become mutually known — otherwise, we might pass like ships in the night without ever connecting or affecting each other. But the moment we lock eyes, both of us know that we are here together, in the same time and place and likely within a 40-foot distance (roughly how far apart averagely-sighted humans can be before we start to lose the ability to pick out faces), socially available to each other and able to communicate.

From here, we could introduce the Word. We could begin with the Word if we had to — if your back is to me and I’m not close enough to reach out and touch you in order to get you to turn and face me, I could instigate a connection with you by calling your name (if I know it) or some other identifier (if I don’t). Hearing your name and recognizing it as yours ignites areas of the brain involved in self-related processing (i.e. thinking about yourself). Eye contact ignites the same areas. This ignition creates a heightened sense of your body in space, making you more aware of your physicality by increasing heart rate and skin conductance (i.e. sweaty palms) and drawing your attention towards the fact of your body’s existence. I call this the “I have hands?!” effect because of the impact it has in a theatrical setting like the Blackfriars Playhouse: an audience member observing an actor performing onstage may lose touch with the fact of their body in space. Observation does not require more than the ability to see and hear and process, all of which you can do remotely — I can watch a performance without even being in the same room as the performers, which I do every time I turn on the TV or go to the movies. The fact of my body does not matter at the movie theatre: Thor cannot see me get up to use the bathroom, and as such that action cannot impact him or influence his performance. I don’t matter to Thor, and in the act of observing Thor the fact of my own matter ceases to matter because it ceases to be important to the task at hand, and I become a disembodied consciousness observing a performance.

But in the universally lit Blackfriars Playhouse, with a visible audience seated around (and on) the stage, my matter matters. The actors can in fact see when I get up to use the bathroom, and that action can impact them and influence their performance. But the actors don’t have to wait for me to get up to prove this point: they can show me I matter simply by doing what Thor by definition cannot: through direct, mutually sustained eye contact. When an actor turns out and looks me in the eye, my brain ignites with the vibrancy of the unmistakable social cue. That actor is connecting with me. My eyes might widen with surprise, and because the actor can see that happen, his eyes might widen also. He responds to me. Suddenly, the fact of my physical reality comes crashing into the forefront of my brain and instead of a disembodied consciousness observing a performance I become a human being participating in a social interaction in which my body matters and oh my god, I have hands, what are my hands doing?

The effect is primal and electrifying. It is immersive and infinitely variable. It is, I believe, built into the structure of Shakespeare’s plays, written for performance in a universally lit playhouse with no concept of a “fourth wall.” It is the basis of human interaction, onstage and off, and it is the first thing I teach to young actors, onstage and off. On the first day of Drama Club or the first day of the ASC Theatre Camp, I have everyone circle up and do introductions: name, where you’re from, favorite Shakespeare play, etc. The next person in the circle knows it’s their turn to talk when you are finished, and they know you are finished when you turn and make eye contact with them. “We pass with eye contact,” I say, and every time a shy or sheepish camper trails off their introduction and looks down and the person next to them picks up on this as their ambiguous cue to begin their turn, I stop them and repeat, “we pass with eye contact.” Humans are humans, onstage and off, four hundred years ago as much as today as much as tomorrow and tomorrow and tomorrow. By reinforcing the fact of connection, of looking each other in the eyes — perhaps wordlessly — we reinforce our shared humanity.