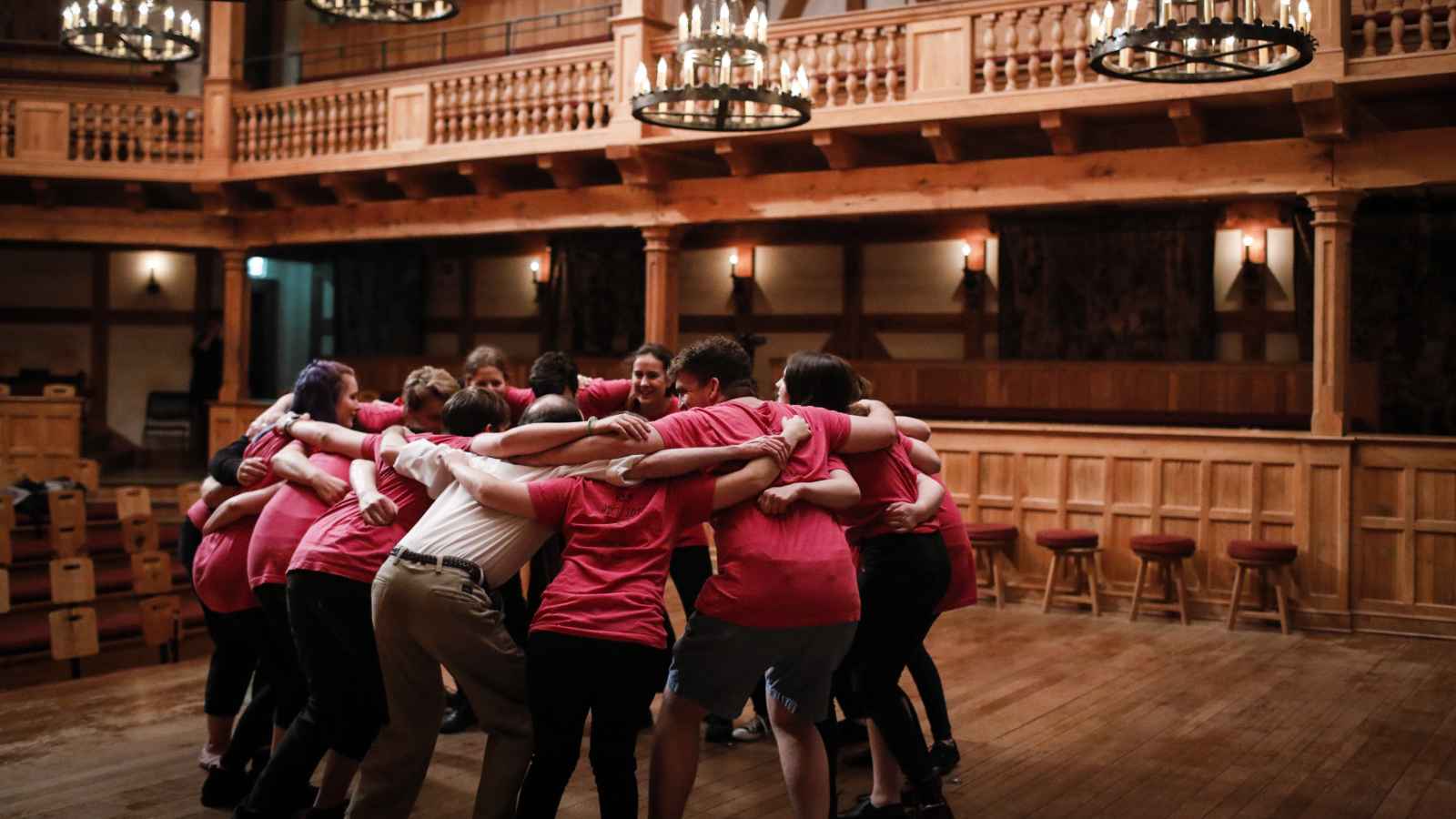 Whenever I get the opportunity to explain what I do as the College Prep Programs Manager for ASC Education, I’m pleasantly surprised by how many people seem blown away by the scope of what we accomplish at the ASC Theatre Camp. Thirty-some kids putting up three shows (okay, four — we do a mid-session Showcase in addition to the three plays that go up at the final performance festival) in three weeks? You feed and house them all? And as soon as the first crop goes home, you then immediately do it again? How on earth do you do it all? The surprise is a pleasant one because the answer is so obvious, and yet so unexpected: I absolutely do not do it all. We do. It takes a team of people, working together and separately, to put up a project as big as the American Shakespeare Center Theatre Camp — just like it takes a team of people, working together and separately, to do almost everything else worth doing.

Theatre is the ultimate team sport, because by definition it cannot be done alone. I like a lot of things about theatre, but this fact is indisputably my favorite one because this fact is the one theatre shares with every other worthwhile human endeavor: in order for it to be done (well or at all), we must do it together. Each individual needs the help of the group in order for both (the group and the individual) to be successful. So, I’ve identified three things every member of every team for every collaborative endeavor, from putting up a show to playing a successful game of football to running a theatre camp, needs to do in order to be helpful:

Learning your lines is the base requirement for competency as an actor, and knowing your part is likewise the first order of business for every member of any collaborative endeavor. Know what are you responsible for and, perhaps even more importantly, what you are not responsible for. Everybody has a part to play, yes, but not every person plays every part. If Lady Macbeth starts saying Banquo’s lines, that cast is in trouble. If the quarterback starts playing defensive lineman, that team is in trouble. If I start playing the part of Show Director, I stop playing the part of Camp Director. I repeat or undercut the work being done by the person who is actually the Show Director, and I neglect or phone in the work I should be doing as the actual Camp Director. Playing the wrong part is not helpful.

It doesn’t matter if you know exactly what to do if you don’t know when (or where) to do it. Team members learn how to take cues from each other, not only to make sure we show up when (and where) we are needed, but also to make sure we don’t do the opposite. In rehearsal, Lady Macbeth learns to wait until she gets her cue to say her next line. In a football game, the defense waits for the team’s offensive line to clear the field before they take it. At camp, we show up to rehearsals ready to work and return to the dorm to relax. Doing any of those things in the opposite order is not helpful.

I learned something from then-Camp Life Coordinator Tess Garrett on the first day of my first session as Camp Director that I will never forget. The campers had just arrived, and we were playing a camp-wide game of “Zip Zap Zop” – an energy-passing game which is usually played competitively, elimination-style. Tess introduced the rules of the game, and then stopped the action after the first, halting round to ask, “How many of you have ever been in a show before?”
Predictably, given the fact that everyone in the room voluntarily chose to spend their summer at Shakespeare camp, every hand went up.

“Great, that’s what I thought. Now,” Tess continued, “keep your hand up if you’ve ever been in a show where every single thing, from start to finish, went perfectly right. You,” she said, turning with a smile towards the hand or two still raised in the air, “are lying.”

Those campers laughed, and put their hands down, and Tess went on to explain that things rarely go perfectly right, mistakes are far more likely to happen than not happen, and then what do we do? “Do we ask the audience to hold on for a moment, we just need to reset?” Tess asked. Murmurs of “no” and “nuh-uh” went around the circle, and Tess confirmed: “Of course not. We push on. We figure it out. The show goes on. And how do we do that?”

A not-uncomfortable silence followed in the wait for her conclusion.

“Together. We do it together. We lean on our cast mates, we help our scene partners, we fix our mistakes together.” We then played another few rounds of Zip-Zap-Zop, and we played them cooperatively — instead of trying to eliminate each other, the campers helped each other recover from mistakes to keep the game running smoothly until everybody felt comfortable with the rules. Then, when we played for elimination, competition became a choice every bit as collaborative as playing the game cooperatively.

Humans are social creatures. Our ability to work together in complex, contextually-dependent ways is what gives us the ability to survive in a world full of creatures far tougher than us. The lone wolf may beat the lone human any day of the week, but even pack of wolves knows to avoid the inventions of human society — together, we have developed tools and tactics to outwit, outrun, outfight, and generally overcome every adversary we’ve ever encountered. The only way we manage to do any of it is together. To quote the rapper Watsky, “we live in a house made of each other and if that sounds strange it’s because it is.”

So imagine how liberating, how terrifying to know that your part in the play is only one tiny piece of a larger whole. Even if your part is the only part in a one-human show, it’s still just a part in that show. Perhaps you need lighting and set and costume designers to create the world you’ll inhabit onstage; perhaps you need a director to give shape and scope to that world and your place in it; perhaps you need press agents and box office staff to get the word out and sell tickets. Perhaps you need none of those people at all, perhaps you put this one-human show together entirely by yourself, but the show won’t go on unless there’s somebody there to watch it. The audience is the final, undeniable variable in the theatrical equation. Perhaps you only need you to put the show together, but it won’t be a show until there’s somebody else to show it to, and thus: you cannot do theatre alone.

Theatre is an extraordinary endeavor — just like football, and just like theatre camp. Sometimes, extraordinary endeavors appear impossible and overwhelming, like one actor attempting to perform a 12-person show all alone, or a lone football player contemplating taking on another team single handedly. It simply cannot be done; one person cannot be everywhere on the field or the stage at once. Only the efforts of many ordinary people working as one can we create something so extraordinary.

Lia Wallace is the College Prep Programs Manager for the American Shakespeare Center. During the summer she runs the ASC Theatre Camp, a residential theatre program for high school students.