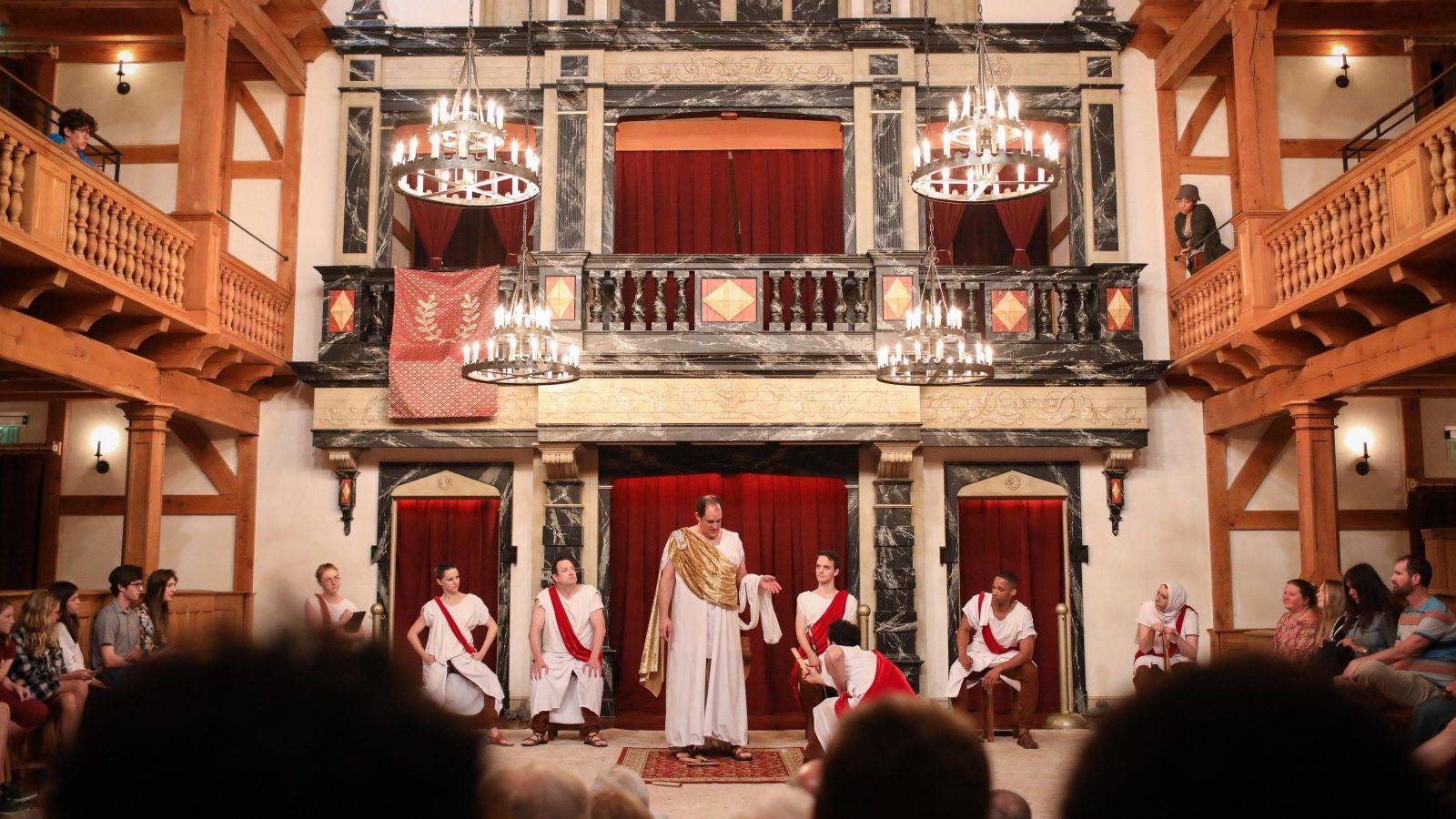 The American Shakespeare Center is promising audiences a Roman adventure this summer with their Festival Season. The season opens with Shakespeare’s Julius Caesar and Antony & Cleopatra. Performances run throughout the summer.

For his inaugural season at ASC, Artistic Director Ethan McSweeny has crafted a repertory season which features both Shakespeare’s Julius Caesar and its companion, Antony and Cleopatra. Together, these plays tell one epic story of politics played out in public and in private. By presenting these plays in repertory, McSweeny gives audiences the chance to discover a new relationship between the classic texts.

McSweeny opens the season with Julius Caesar, which he calls “a cautionary tale about the unintended consequences of political assassination.” Recognized with more than 75 awards and nominations for his work (including Tony, Drama Desk, Outer Critics Circle, and Helen Hayes), McSweeny took the helm at ASC last year. Joining McSweeny on this journey to Rome is Obie award-winning director Sharon Ott, chair of Virginia Commonwealth University Theatre Department and former Artistic Director of Berkeley Repertory Theatre, who staged the romantic Antony and Cleopatra.

ASC’s Julius Caesar offers audiences a thrilling ride through the politics of ancient Rome – although some of the lessons learned may feel just as present in 2019 as in 44 BC. McSweeny’s staging surrounds the audience with action and places them in the role of “crowd,” witnesses to the dark events of the play.  This adventure through distant (or, perhaps, through not-too-distant) history will leave its mark on viewers as they see the cause-and-effect of mob mentality that takes place before them.

The second production of the season, Antony and Cleopatra, offers a more intimate look at two people whose private lives cause great waves in the public sphere. This epic tale brings audiences to both Egypt and Rome, and includes battles on land and sea as the world is turned upside down after the death of Caesar.  Mark Antony and Cleopatra find themselves caught up in something bigger than themselves – when all they want is each other.

“We’re delighted to welcome artists of national caliber like Sharon Ott and Murrell Horton into our company and see them embrace ASC’s commitment to Shakesepeare’s performance conditions. The way they have responded individually and collectively is thrilling to watch.  The shows speak to each other in an integrated way, highlighting the joys only repertory can bring,” says Amy Wratchford, Managing Director of ASC.

“We’ve assembled a remarkably versatile and hard-working company of sixteen actors who are collectively taking on about 80 roles across the two plays. It’s a tour-de-force of acting from start to finish and audiences will get the joy of seeing performers tackling the same role in two or more plays, as well as shifting from leading to supporting player.” says McSweeny of the actors of the 2019 ASC Resident Troupe.

David Anthony Lewis plays the eponymous and infamous Caesar in both Julius Caesar and Caesar & Cleopatra. This is Lewis’s 7th season with ASC. Brandon Carter, who has performed with ASC for three seasons, takes on the role of Cassius in Julius Caesar – leading the conspiracy against the emperor. Alongside him is long-time ASC actor John Harell, who plays the patriotic Brutus. Actor and fight master Geoffrey Kent (Utah Shakespeare Festival, Colorado Shakespeare Festival) joins ASC for the first time this summer. Kent plays a charming and courageous Mark Antony in both Julius Caesar and Antony & Cleopatra. To his Antony, is returning actor Zoe Speas as the hot-blooded yet queenly Cleopatra. These actors are joined by 11 other company members to populate Shakespeare’s world.

The Blackfriars Playhouse has also undergone renovations just in time for the Summer Season. Improvements to the Playhouse include a refinished stage floor, new curtains, enhanced lighting and chandelier placement, and wider stairs onto the stage. “The Playhouse was built in 2001, in 2019 it turned 18 and we decided it was time for a new suit,” says McSweeny, “plus, we wanted to continue to enhance our audiences’ experience of this extraordinary space, as well as explore new ways to tell stories in it.”

The actors, directors, and even the stage floor are ready for the Summer Festival Season at American Shakespeare Center to begin. Opening weekend is July 4 – 7. Performances continue throughout the summer. Tickets are on sale and can be purchased by calling the ASC Box Office at 877-Much-Ado or on the web at americanshakespearecenter.com.