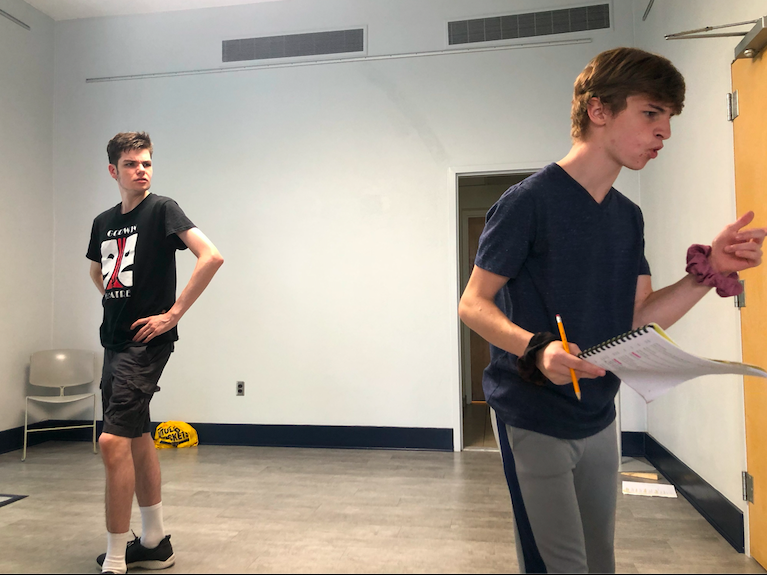 After returning from our day off, we began the rehearsal with more ensemble building. Taylor led a game of yes and an exercise in which the cast had to count as high as they could get without more than one person saying the number. Then, we jumped into tablework and blocking for Act I, Scene I with Kim while Austin took Liam (Petruchio) and Teagan (Grumio) to learn their fight for Act I, Scene II. After this, Kim blocked Act I, Scene II, then we discussed the ages of the characters and what the world of Padua is like. Rehearsal closed with a moment of mindfulness and an exercise to remind us that we have bodies after a day full of thinking heavy work.

“Thou shalt be master, Tranio in my stead”

“My master has grown quarrelsome.”

—Grumio, Act I about Petruchio

“Allow yourself some generosity for coming into a new place and being so brave.”

—Kim about the first few days of camp

Act I is filled with masters and servants. Lucentio and Tranio arrive from Pisa, and Petruchio and Grumio arrive from their travels. Isaac, Violet, Liam and Teagan began to play around with what the lines tell us about their two contrasting dynamics and what can be shown about the two relationships. Tranio and Lucentio have more comforting physical contact while Petruchio and Grumio mostly have violent altercations.

Masters and servants, servants and masters and everything in-between. In The Taming of the Shrew, Shakespeare gives us a whole range of relationships between masters and servants. Tranio and Lucentio are almost like brothers. Lucentio feels comfortable enough with Tranio (they have grown up together) taking his clothing and cavorting around Padua in his place to convince Baptista that he (as Lucentio) is who should marry Bianca. Tranio takes Lucentio’s public position as Lucentio disguises himself as a tutor of Latin and languages to court Bianca privately. In fact, Tranio orchestrates the switching. The two switch places almost seamlessly.

Petruchio has a vastly different relationship with his servants. Grumio, who is his closest manservant, is treated with contempt and violence. In Act I, Scene II (as pictured above) Petruchio goes so far as to beat Grumio after a moment of confused meaning. I don’t think there is a world in which Petruchio would want Grumio to take his place in society.  Later in the play, when Petruchio arrives home, he beats his other household servants.

The dynamic between Katherina and Petruchio is what is most frequently focused on, but the layers of this play include masters and servants, fathers and children, and many other types of relationships which we will continue to explore in the coming weeks.