At the American Shakespeare Center, we don’t just love words — we believe in them. As it says the section of our mission statements outlining the beliefs that drive our actions, “We believe in the joy, the beauty, and the transformative power of words.” We believe words symbolize ideas and that ideas, good or bad, have power. America is reckoning with some powerful ideas about the legacy of racial inequity born, like our country, out of the institution of slavery. Part of that reckoning centers around the symbols of our Confederate monuments: statues, businesses, roads, lands and other societal symbols named in honor of prominent Confederate leaders. Debate has sprung up regarding whether removing, renaming, or otherwise rededicating these spaces is appropriate. What story do they tell about us? Is it the one we want to tell? I want to take a crack at those questions from the perspective of rhetorical analysis, and look at the country as if it were a Shakespearean speech being prepared for performance.

When analyzing a speech in Shakespeare, we dive into the rhetoric headfirst. We look at how the arrangement of words or even of individual letters creates certain sounds or images at the micro-level of each line or sentence (the rhetorical figures), and what the overall effect of those smaller arrangements might be on the macro-level of the speech’s overall tone or style (the rhetorical appeal). Everybody will interpret these findings differently, because identifying rhetorical patterns in Shakespeare is not about unlocking some hidden, absolute “meaning” to the speech but rather about unlocking different options based in the text itself, and then making a choice about which option to pursue in performance. We may agree on a speech’s rhetorical figures and appeals, but disagree on how to perform those rhetorical findings in a way that best supports the story we’re trying to tell with that speech today.

Let me give you an example. In Act 2, Scene 1 of The Comedy of Errors, Dromio of Ephesus relates an encounter he had with the mistaken Antipholus of Syracuse:

Where is the thousand marks I gave thee villain?”

Regardless of the context of this speech or anything else about the play, a rhetorical analysis of the lines will reveal some obvious patterns for us to make choices about. For the purposes of this example, let’s stick with the easiest figures to identify quickly: figures of repetition. Dromio repeats himself a lot in these five lines. More specifically, he repeats the phrase “my gold” four times and the word “quoth” eight times — four times in the phrase “quoth I” and another four times in the phrase “quoth he.” In fact, he only uses 25 unique words in this 47-word passage, meaning that nearly half the time he is speaking, he’s repeating himself. 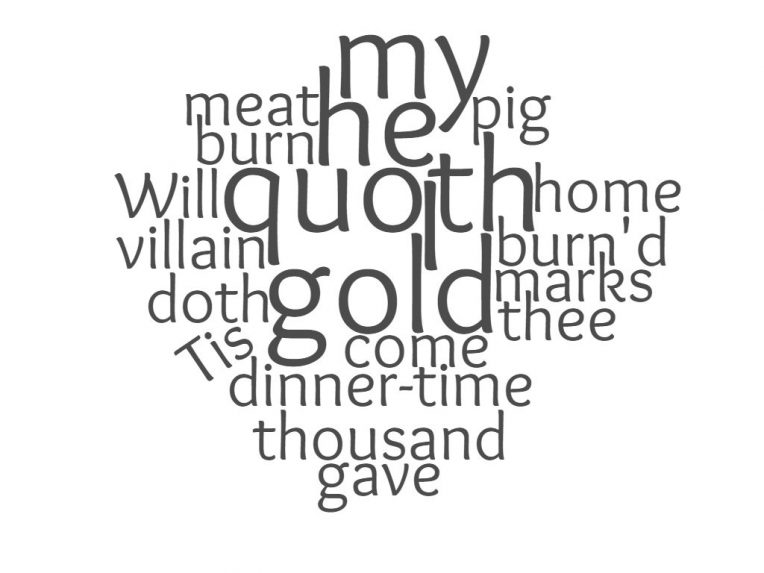 Repetition brings emphasis, no matter what the flavor of that emphasis. So long as Dromio actually says all of the lines, his audience will hear those phrases and the words within them repeated that many times, no matter how Dromio chooses to deliver them. When I see the unmediated repetition of the phrase “my gold” I immediately think that “my gold” must be proportionately important to the speaker. What I may not do (or even be able to do) is take into account the broader context of this specific repetition within the context of the speech or indeed the play. If I’m not familiar with either, I may make genuine mistakes in interpretation — for example, if I don’t know that Dromio is repeating here an earlier conversation he had with Antipholus, I may think Dromio is talking about his own gold and not his master’s. Even without such literal mistakes, I may draw a different conclusion about Dromio’s use of repetition than you do. The only common experience we can assure between two listeners of this speech is how many times they will hear the words “my gold” repeated.

Figures of repetition are some of the “catchiest” forms of rhetoric (I like to say repetition is the best form of pedagogy) because these figures stick themselves in the listener’s mind. But that’s all they do: stick themselves. It’s up to each listener to interpret the stickiness in their own mind, and every listener may have a different interpretation of Dromio’s repetition of the phrase “my gold.” I may think Dromio is mocking his master’s obsessions with accumulating wealth, and you may think he’s revering it. Both of us can be right, but the proof is in the performance. The performer clarifies the context of the speech for the audience, letting us know both the facts (Dromio is repeating a conversation he had with Antipholus, not necessarily stating his own views) and the feelings (Dromio is being mocking or reverential or any number of other choices in his repetition of the phrase “my gold”) through tone, timing, and other elements of phrasing. This performative contextualization is the basis of common sense-making, allowing shared ideas to emerge from individual words.

Just as repetitions dot the landscape of Dromio’s speech, Confederate monuments crowd the landscape of our country. These monuments are repetitions of an idea — the Confederacy — and each individual micro-level repetition adds up to the macro-level story of a nation continuing to stick that idea in its citizens’ minds. Every person may interpret that idea differently. Left to our own devices, with no performative contextualization to guide us, we can decide that the Confederacy represents all sorts of different things — but the fact of our reinforcement of its ideas through repetition is one we cannot deny. When I see the name “STONEWALL JACKSON” written in neon letters in my city’s skyline, I know my city wants to honor the life and deeds of Confederate General Thomas “Stonewall” Jackson. Without any sort of contextualization — performative or otherwise — I have no way to distinguish which parts of Jackson’s life the city intends to honor: the neon sign of his name merely repeats whichever ideas are already stickiest. For you, that may be Jackson’s defense of his homeland from the invading Union army. For me, though, Jackson’s defense of the institution of slavery is way stickier. Every repetition of his name makes that idea stick harder.

When we look at the country as if it’s a speech, we start to realize that all of these repetitions add up to amplify whichever story we decide they tell individually. The only common experience we have is the repetition itself. If you think they tell a story of local pride, you will see that pride reinforced throughout the countryside. If I think they tell a story glorifying slavery, I will see that glorification likewise reinforced everywhere I look. Without some sort of common contextualization, we’re left with our own interpretations of these monuments, and we each get to decide which story they tell in the production of our country. We each get to ignore the facts of the context we either don’t like or don’t see, and arrive at our own separate (but certainly not equal) conclusions.

This intentional ignorance, blind to the benefits of any contextualization, is how we arrive at the present. We live in a country that claims to have eradicated slavery in all of its forms at both the macro-level of legislation and the micro-level of symbolic stories told by monuments. But the micro-level analysis ignores interpretations of those symbols that tell a different story about this nation’s relationship to slavery — one reinforced at the macro-level when you take a wider look at the way legislation like the Thirteenth Amendment loopholes new forms of racist slavery into existence. We are not making common sense of the words we use to tell our nation’s story together, but rather dividing ourselves further along our individual interpretations of those words in order to continue repeating whatever story we’d prefer to hear ourselves. The repetition of symbolic figures in America has become nothing more than a rhetorical figure of repetition, and no matter how we perform it, the repetition of these symbols tells a sticky story. Is it the story we all want to tell?