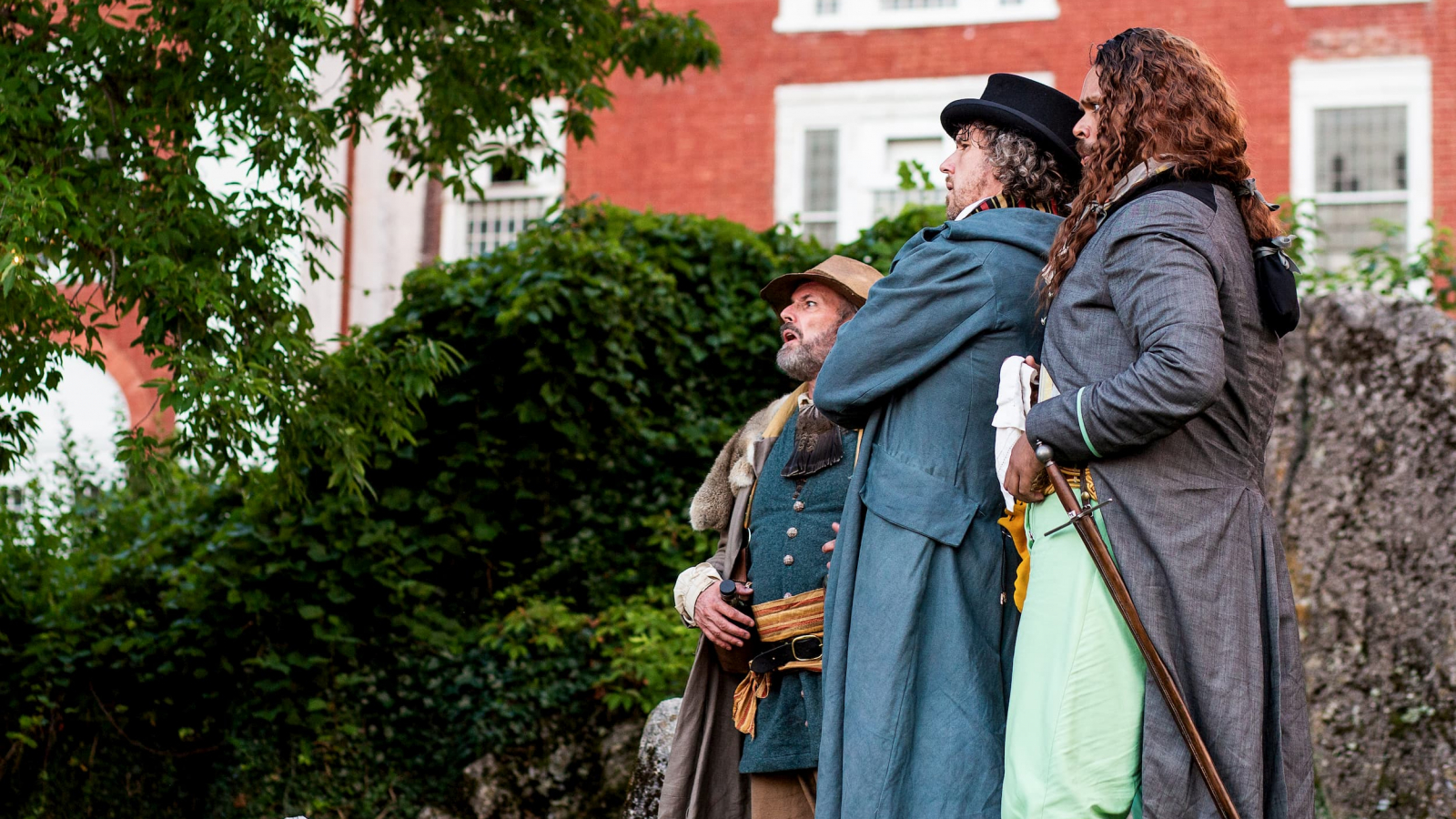 On July 25, under the stars at the historic Blackburn Inn and Conference Center, ASC’s Twelfth Night premiered. The show was sold-out and, according to our actors, performing for a live audience again was an equally thrilling and terrifying experience.

John Harrell, who plays Sir Toby Belch in ASC’s production, recalls, “I was unsure anyone would want to see a live play for a long time, and I found the ovation at the end of that first performance quite moving.”

Moving. Harrell’s word choice captures ASC’s mission since we began rehearsals for our 2020 SafeStart Season back in June. In one sense of the word, we have been constantly in motion. We modified the Blackfriars Playhouse to promote social distancing and hygiene, and moved theatre outside to accommodate wider audiences. We continued with our #SHXCAMP, launched our free monthly concert series Live @ Blackfriars, and have facilitated weekly conversations on race and Shakespeare through Dr. Ralph Presents: ‘Then Must You Speak.’ In short, we have been working tirelessly to bring about a healthy mix of thoughtful, lighthearted, and educational content that we hope moves you too.

Twelfth Night is not purely a romance, however. After all, the play’s name refers to the last day of Christmas celebrations, which, in the early modern era, were characterized by a spirit of parody and excess. Therefore, we can expect Twelfth Night to feature its fair of mischief. This mischief manifests itself through the schemes and shenanigans of Fabian (Matthew Radford Davies), Sir Toby Belch (John Harrell), Maria (Sarah Suzuki), and Sir Andrew Aguecheeck (Topher Embrey).

At first, these characters have very different agendas. Olivia’s lady-in-waiting Maria, who Suzuki describes as “stubborn” and “sarcastic,” wants to alleviate Olivia’s grief by attending to the house and keeping the peace as much as possible. As Olivia’s best friend, Maria has some scathing opinions of Olivia’s many suitors, and rightfully so. In the words of Suzuki, “None of them deserve her!”

Perhaps the most difficult aspect of Maria’s job is attempting to corral Olivia’s rowdy Uncle Toby and her pestering suitor Andrew. It doesn’t help that Toby and Andrew don’t seem to care at all about Olivia’s (un)happiness. Harrell, however, thinks there’s more to the story.

“Toby tells us that he is ‘sure care’s an enemy to life,’ and I take him at his drunken word, but I don’t think we need psychology to tell us that drinkers drink for a reason,” he says.

The one thing that unites these four characters is their unrelenting disdain for Malvolio (played by Michael Manocchio), a social-climbing steward who is constantly raining on everyone’s parade. When Malvolio interrupts one of Toby and Andrew’s late-night brawls, and throws some snide comments Maria’s way for good measure, the three decide to teach Malvolio a lesson. It doesn’t take long before Fabian, a Welsh gentleman who lost favor with Olivia after Malvolio damaged his reputation, decides to take part in the prank.

Before you ask, we tried to ask the actors what exactly this prank involves, but they told us we would have to see the show to find out.

Now, if you’re like us and find yourself feeling just a teeny-bit bad for Malvolio — don’t worry. Davies, an associate professor in the Shakespeare and Performance graduate program at Mary Baldwin University, reminds us that Malvolio “embodies those forces antithetical to entertainment and levity.” He goes on to say that Malvolio vows revenge, as if Shakespeare is pointedly proving that “the party couldn’t last.”

The party might end, but we hope the feelings of warmth, wonder, and joy linger. After all, returning to our earlier thought, ASC’s Twelfth Night moves in many ways. Suzuki and Davies point to the uplifting quality of the live music, while Embrey treats the 90-minute, no-intermission performance as a much-needed “break from reality.” Above all, the cast sees Twelfth Night as a reminder that we must keep laughing.

“Comedy is necessary in all circumstances,” says Harrell, “but particularly in times of woe. It’s important to remember that humans have been laughing at death and cruelty for a long time. May we never stop.”

Whether you are watching at Blackfriars, Blackburn, or online via BlkFrs LIVE, we invite you to journey with us to Illyria. You will laugh, you will cry — you might even cry while laughing! One thing’s for sure: you will be moved.

We are thrilled to announce that our live stream production of  Twelfth Night on BlkFrs LIVE is premiering TOMORROW — Friday, August 21 — via Marquee TV! Trust us, you don’t want to miss this one-day-only event, so be sure to get your tickets before it’s too late!

Like this post? Let us know by sharing this post on social media! AND — be sure to check our website for ticketing information. Plus, we now have Shakespeare Mustache Face Masks for sale — pick one up in our online gift shop!