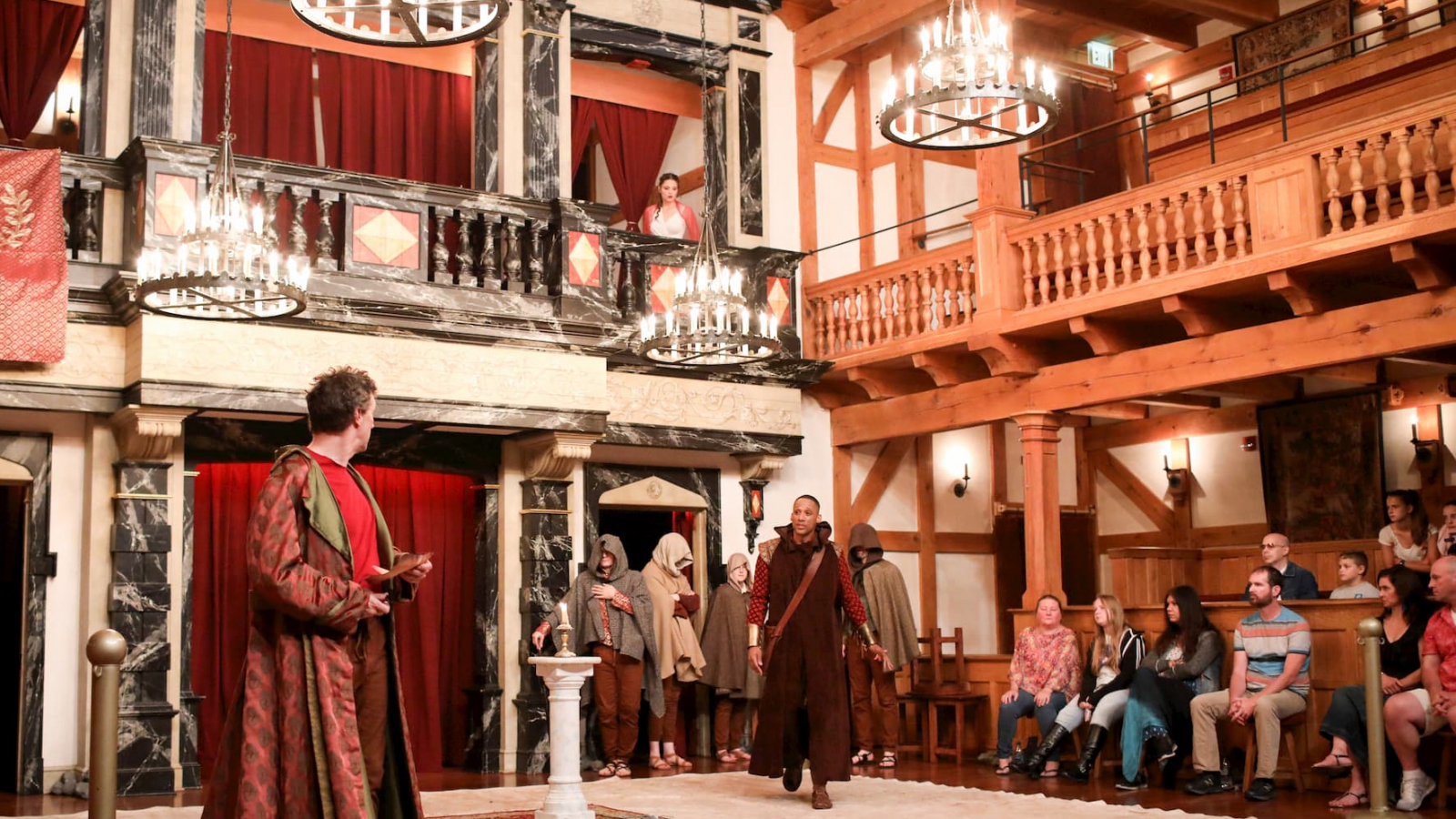 Theatrical technology has made great advancements over the last four centuries; today, Shakespeare’s plays are frequently performed with lighting, sound, and other technical effects. But at the American Shakespeare Center, universal lighting is de rigueur for classics and new plays alike. Inspired by the pre-electricity techniques of Renaissance theatre-makers who employed natural sunlight in outdoor theaters like the Globe and candlelight in indoor spaces like the original Blackfriars Playhouse, universal shared lighting empowers a contemporary audience to experience the play the way Shakespeare’s audience might have. And, while Shakespeare’s plays can work well with twenty-first century tools, the reverse is not necessarily true: not all contemporary plays are suited to a universal lighting context. (Lauren Gunderson’s I and You, Annie Baker’s John, and the musical Spiderman: Turn Off The Dark are all examples of recent plays in which lighting effects serve a dramaturgical purpose.) A close look at the plays of Shakespeare, as well as those of his new contemporaries, reveals particular writing techniques derived from a deep understanding of the implications of mutually visible spectators and performers.

The lights going down in a theatre can be a thrilling moment, a clear signal to the audience that the main event is about to begin. Losing the ability to dim the house lights might prompt a writer to consider: “how else can I cue my audience?” Some plays, like Shakespeare’s Henry V and Romeo and Juliet, do this formally with an introduction or prologue; Anchuli Felicia King offers a similar example within our Shakespeare’s New Contemporaries canon. Alternatively, a play might begin with a significant burst of activity: see Shakespeare’s The Tempest, which opens with a wild storm at sea, or Mary Elizabeth Hamilton’s 16 Winters, or The Bear’s Tale, which begins with the characters of Pauly and Her breathlessly arriving at their hideaway with all of their possessions.

The setting of those initial dramatic actions also deserves deliberation. According to my unscientific research, the majority of Shakespeare’s plays begin in public or semi-public spaces, like streets and throne rooms. These are places where audience members, who are visible throughout the performance, can be implicitly “cast” as bystanders without having to be explicitly acknowledged. (Writers may also wish to remember that there are many different ways in which a visible audience might be referenced or employed). Julius Caesar’s opening with “Hence! Home, you idle creatures get you home:/Is this a holiday?” is a delightful moment of metatheatricality that simultaneously launches the story. Beginning plays in this manner both creates a bridge between the audience and the action of the play and builds potential for further interaction between the two.

As the play progresses, the continuous visibility and the lack of lighting effects disincentivize moving furniture and instead put the onus of establishing the location on the text. In Amy E. Witting’s Anne Page Hates Fun, when the nurse character begins a scene with “If you have so much time on your hands to show up without an appointment…,” the audience quickly understands that the scene is the doctor’s office; a simple “Welcome to Rome” like in Shakespeare’s Antony and Cleopatra likewise does the trick. Shakespeare’s plays, and the plays of the SNC canon, also provide examples of dialogue creating environment, weather, and time of day. With a world created by words, the play can be anywhere and can go anywhere.

Once the scene has been set, the duty of directing audiences’ attention is again driven by text (and staging) rather than spotlights. A pair of characters might withdraw from a larger group for a private discussion or someone might share a secret with the audience. These actions, and others, keep focus on the plot. For example, The Merry Wives of Windsor, in 2.1, skillfully separates and reconvenes different groupings of characters, orchestrating bodies into an energetic, multi-faceted, and story-driven scene. And when scenes conclude, playwrights might consider writing in how characters exit the space or even having the next scene overlap its predecessor by beginning in a different part of the stage. The audience will witness the performers’ departures from the playing space, so how might those departures be dramaturgically driven?

Finally, a writer for a lights-on theater will have to consider how to conclude their play without a blackout. Techniques include aural cues: the majority of Shakespeare’s plays wrap up their action with rhymed couplets, which have a definitive sound/feel to them. Sometimes the rhythm of couplets simply wasn’t enough for Shakespeare; he ended many of his comedies with a song or dance. It’s a strategy that we also see used by both Amy E. Witting and Anchuli Felicia King in Anne Page Hates Fun and Keene, respectively. Other Shakespeare plays conclude with a mass departure for an offstage location; The Winter’s Tale, for example, ends with Leontes’ “Good Paulina,/Lead us from hence.” And, to prevent any doubt, there is always the option of the epilogue, a direct acknowledgement that the action has ended and an appeal for applause.

From beginning to end, universal lighting affects actors, audience, and action. Both Shakespeare and the Shakespeare’s New Contemporaries playwrights show how universal lighting might be employed, embraced, and exploited, and we look forward to future SNC writers illuminating new practices and possibilities for our producing conditions.