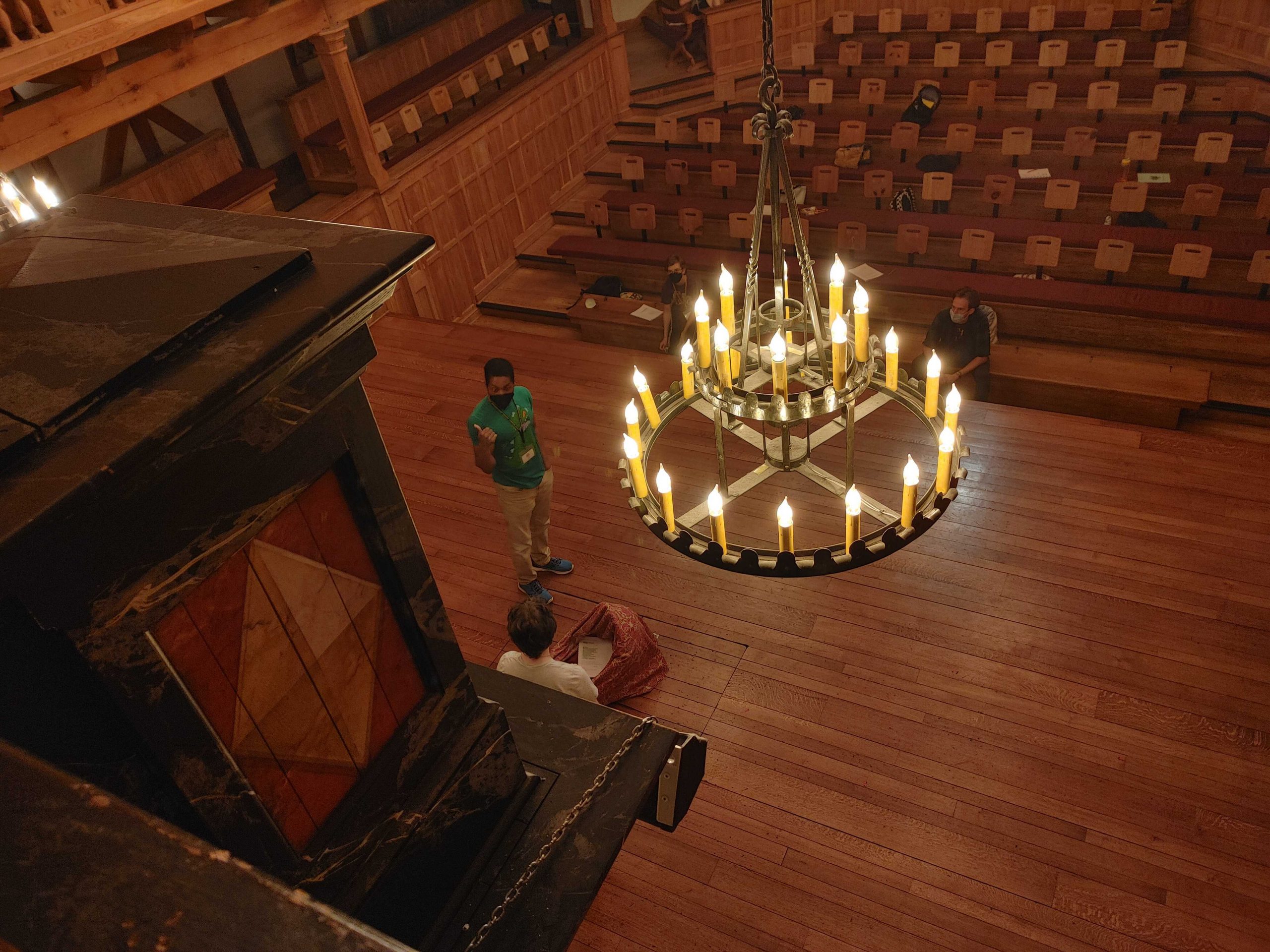 Today in rehearsal, we blocked the last few remaining scenes of the show. In The Winter’s Tale, King Leontes of Sicilia (Donovan) suspects his wife Hermione (Sophia) of cheating on him with King Polixenes of Bohemia (Corinne). Leontes sends messengers to an oracle to tell him whether he’s right. The messengers return and tell him Hermione is innocent. Leontes defies the oracle. A thunderous storm ensues, during which both Leontes’ son Mamillius (Mayela) and Hermione die. Our task was to create a feeling of divine retribution without any recorded sounds. We figured out a sequence of sounds from backstage to simulate a storm. We used chimes to turn the noise from just bad weather to the ominous noise envisioned.

A highlight of the day was blocking the famous bear scene. About halfway through the play, Antigonus (JD/Froggy) leaves baby Perdita (Mayela) to be found by shepherds. Then, a bear (Desi) shows up and eats Antigonus.

To create cohesive noise takes precision and intentionality. Our director KP first explained to campers the sounds he wanted them to make and then they each volunteered what they could do. Some of the campers whistled, while others made “shhhh” noises to create rain. Our Production Intern Mary Rose went up to the Heavens (the trap door above the stage) to simulate thunder by rolling around a bowling ball. I was very excited to get to use the chimes. At first, a sort of cacophony of noises emerged. Then, each sound was adjusted to fit with the others. We ran the scene several times and KP gave notes such as “be 5% quieter” and “I like the frequency of that sound.” My cue to start the chimes was Leontes’ (Donovan) line “There is no truth at all i’th’ oracle!” We found that the chimes were too loud for me to hear my cue line to stop them. KP had me hit the chime, count to four, and then hit it again. I did that while we ran the scene again. KP felt it didn’t quite work so he had me try again, this time counting to eight for each hit. I was told to hit the chime fourteen times, which also forced the campers to speed up their acting to reach the final line during the storm. This served to increase the intensity and chaos of the high-stakes scene.