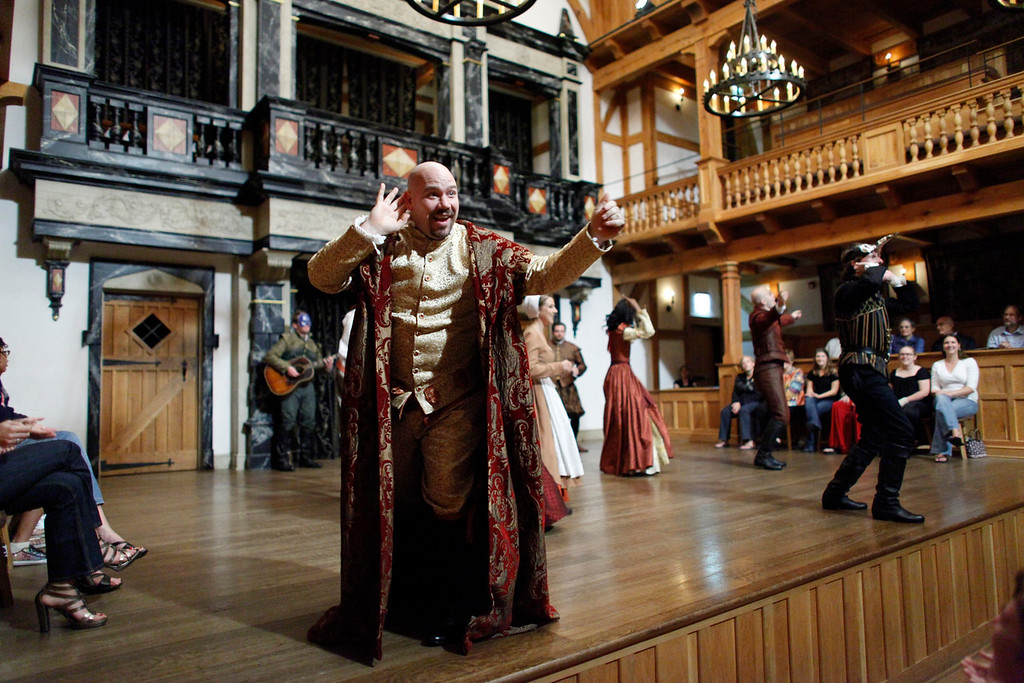 Rick Blunt and the cast of ROMEO AND JULIET. Photo by TOMMY THOMPSON. 2010. 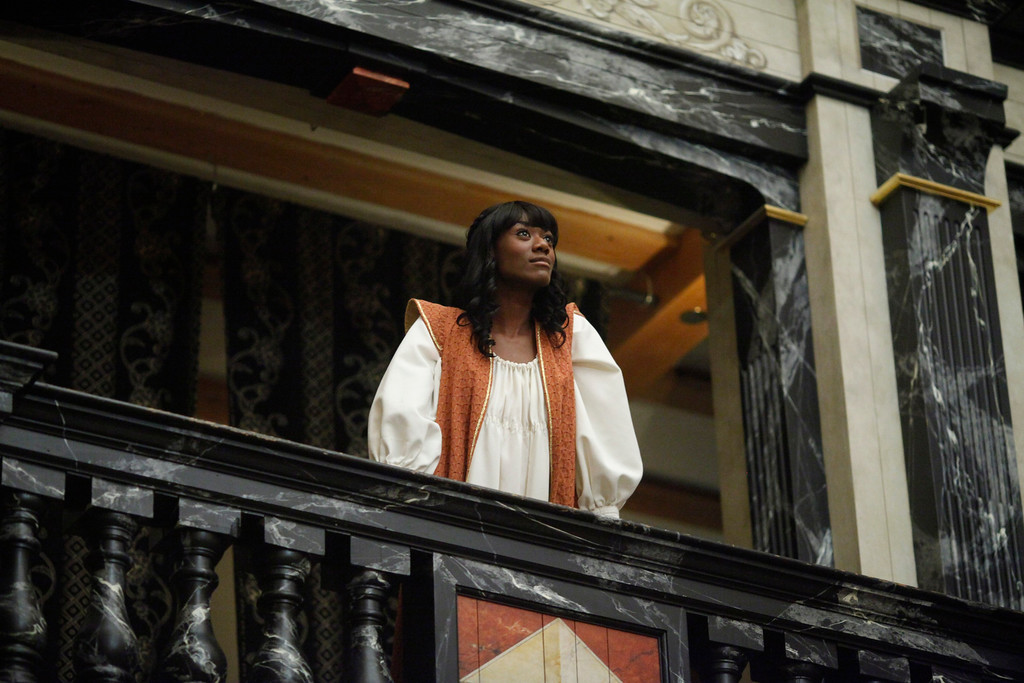 Brandi Rhome in ROMEO AND JULIET. Photo by TOMMY THOMPSON. 2010. 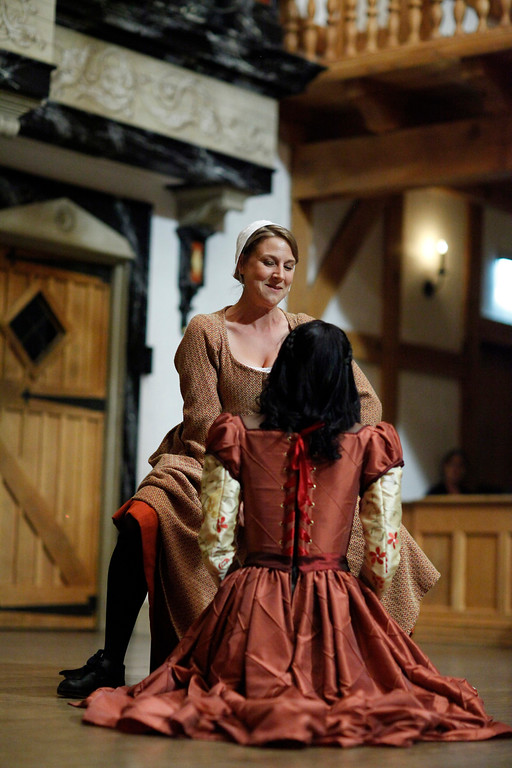 Ginna Hoben and Brandi Rhome in ROMEO AND JULIET. Photo by TOMMY THOMPSON. 2010. 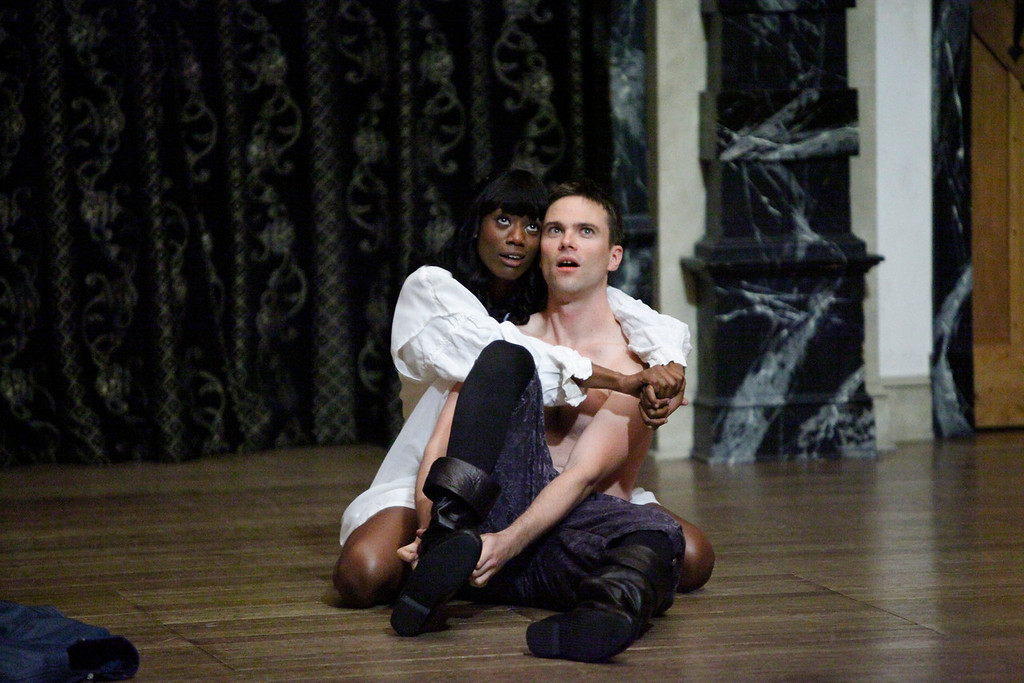 Brandi Rhome and Josh Carpenter in ROMEO AND JULIET. Photo by TOMMY THOMPSON. 2010. 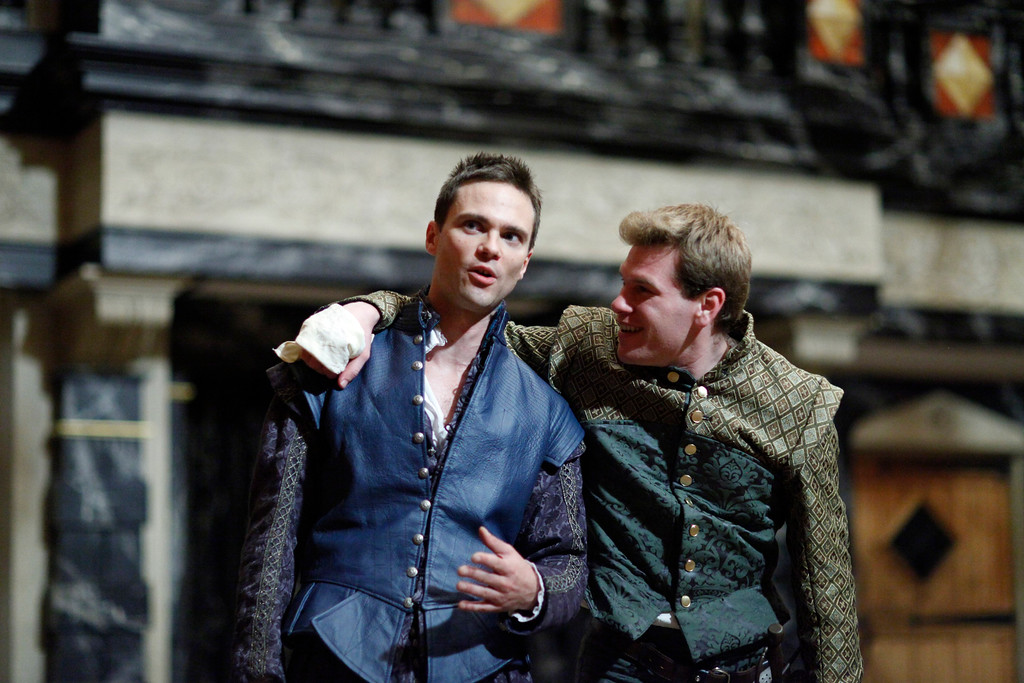 Josh Carpenter and Joseph Rende in ROMEO AND JULIET. Photo by TOMMY THOMPSON. 2010. 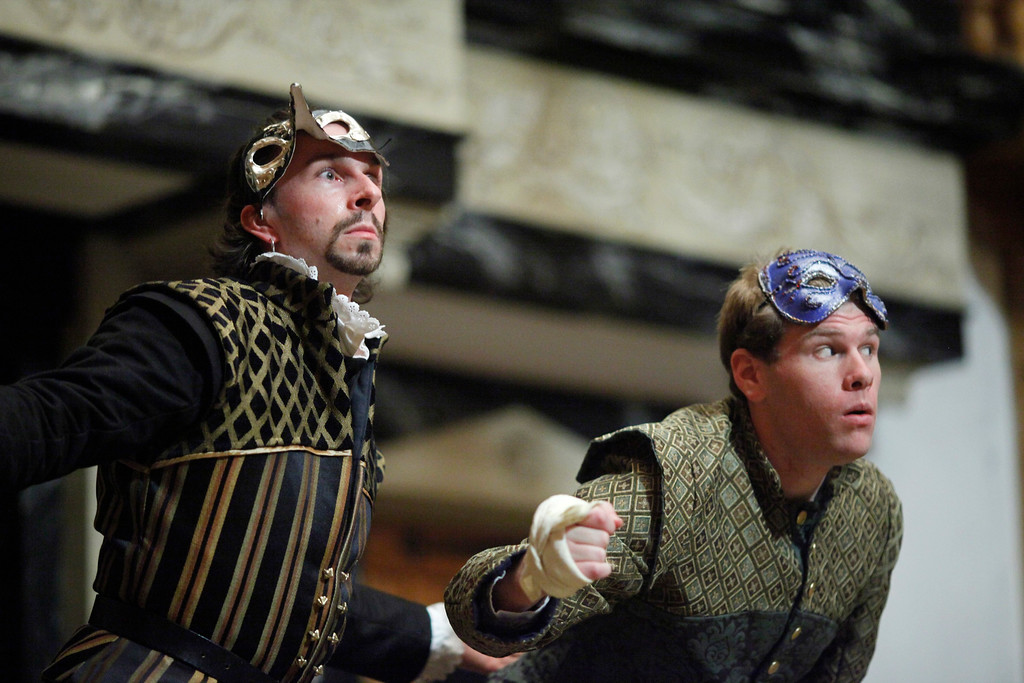 Curt Foy and Joseph Rende in ROMEO AND JULIET. Photo by TOMMY THOMPSON. 2010. 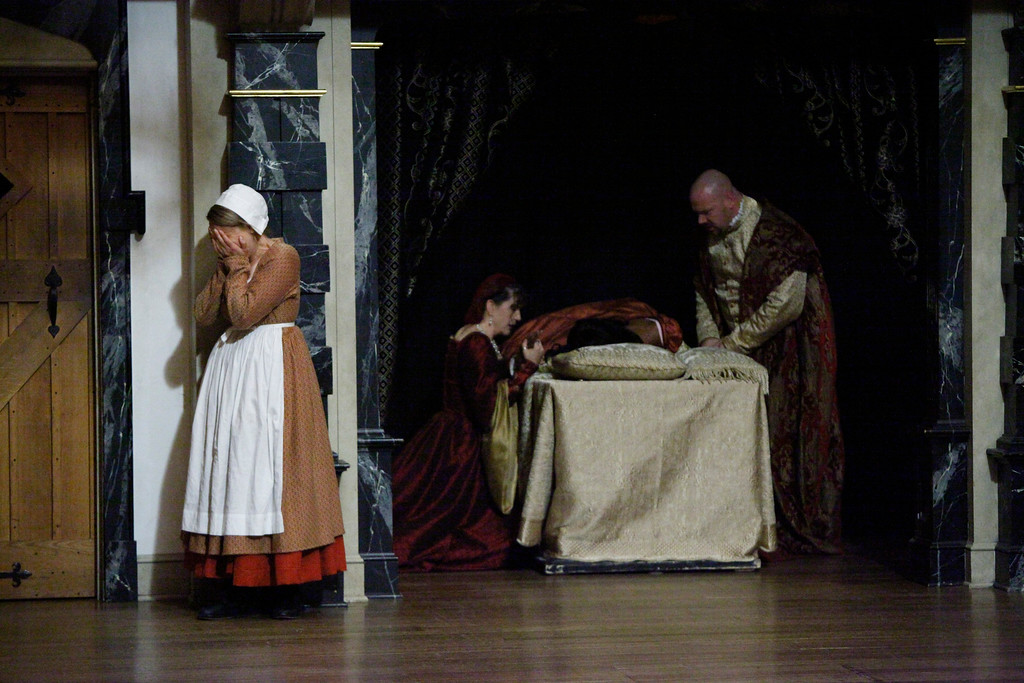 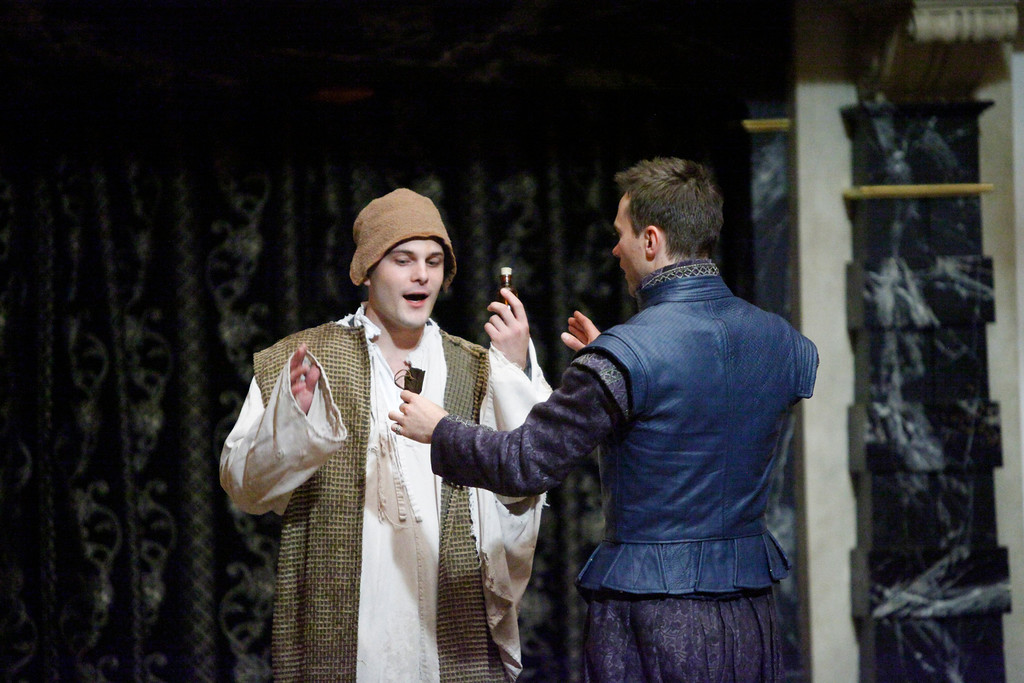 David Zimmerman and Josh Carpenter in ROMEO AND JULIET. Photo by TOMMY THOMPSON. 2010. 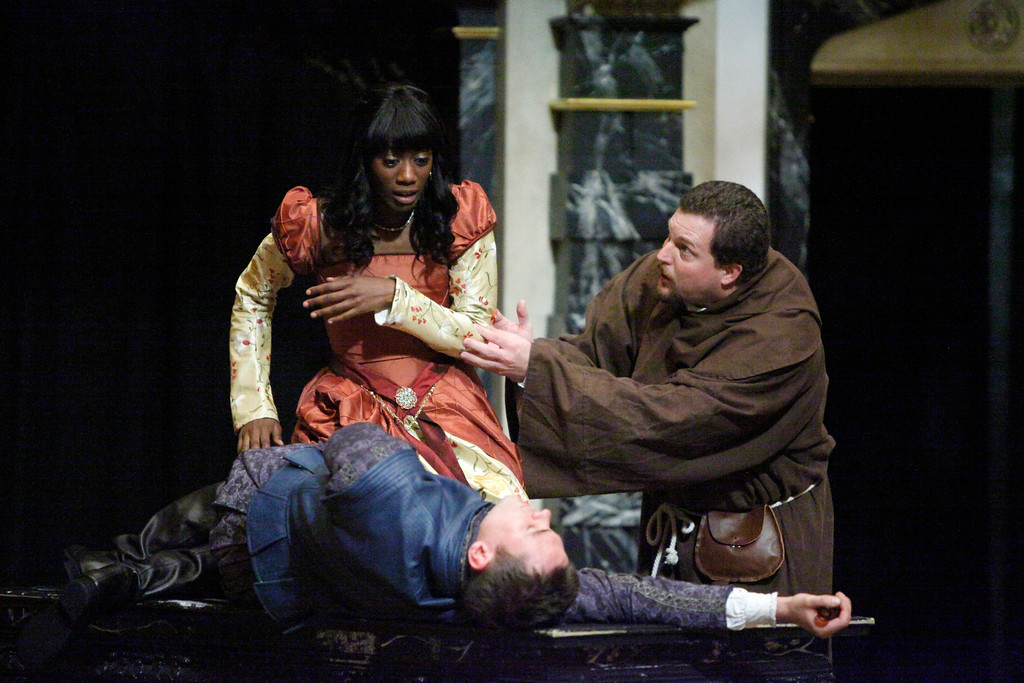 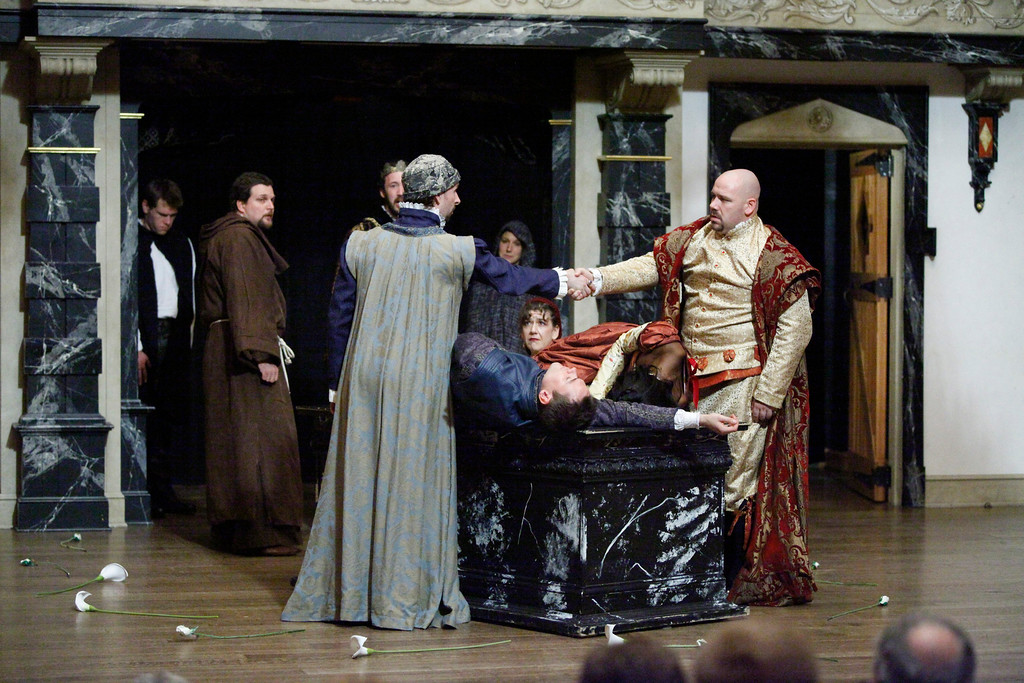 The cast of ROMEO AND JULIET. Photo by TOMMY THOMPSON. 2010.

It will not last forever

We learned more from a three-minute record than we ever learned in school.
No retreat, baby, no surrender.
Bruce Springsteen

When I first directed R&J, I was twenty years old. I think a legitimate criticism of that modern-dress college production (with a loud, ever-present, cinematic rock and roll soundtrack; fights with trash cans and baseball bats; and a slow motion killing with a golf putter and a strobe light) was that I gave the world of the kids more weight and credence than the world of the adults. Now that I am a father of two little girls and have two more decades of life in my bag of tricks, I hope that I can bring balance to the story. I don’t believe the adults in R&J are all idiots all the time. As a matter of fact, I think Daddy Capulet gets two huge brownie points for 1) urging Paris to “woo” Juliet because Dad (initially) wants to allow his daughter to choose her husband herself (just like Baptista with Kate in Shrew) and 2) knowing his foes’ son (Romeo) has crashed his party, he tells Tybalt to chill out because rumor has it that Romeo is “virtuous and well-governed.” The play gets messy because it’s about imperfect humans. The Friar has the best of intentions, but he begins to play God and things go very wrong. Romeo is our hero, but he kills Paris (even though many directors cut this killing because “Romeo wouldn’t do that”…uh, yes he does!). Romeo and Juliet do a lot of whining when they separately threaten to kill themselves in the Friar’s cell. The timeless truth Shakespeare tapped into throughout his play is that human beings, young and old, are full of both positive and negative qualities, heroics and foibles, beauty and warts.

The days were endless, we were crazy we were young
The sun was always shining, we just lived for fun
Queen

Another element of timeless truth in R&J is that young people often have sex on the brain; it’s a play filled with some of the bawdiest humor Shakespeare ever wrote. These Capulet and Montague teenagers are fixated on sex, sexual humor, and plain ol’ dirty jokes – just like teenagers today and teens of every era. While we at the ASC don’t feel the need to illustrate each and every dirty joke with gestures and gyrations, part of our job is giving the words their due and letting the meaning and the humor breathe. We will never “add” bawdiness or nudity that Shakespeare did not write; so if you hear a dirty joke, know that Shakespeare is the culprit. The “crushed-velvet Shakespeare” that many romanticize as “high culture” has given us the preconceptions that R&J is just some sort of sanitized and beautiful romance; but the first half of R&J is probably the funniest (and bawdiest) first half of any play in his canon. I believe that this humor allows the tragedy of Mercutio’s death and the second half of the play to resonate on a deeper level. I say it often about Shakespeare’s plays: it’s a drama, it’s a comedy, just like life.

This is the time to remember, ’cause it will not last forever
These are the days to hold on to, ’cause we won’t although we’ll want to
Billy Joel

The English language was still developing when Shakespeare wrote his plays and Shakespeare himself invented many words and used others differently than anybody before or after him. Audiences went to “hear” a Shakespeare play and experience how the playwright was going to twist the language into new and wild places. Some of the words Shakespeare used are now archaic, but ninety-eight percent of the words he wrote are still in use today. If you knew ninety-eight percent of the words in a foreign language, you would consider yourself fluent. That means you are “fluent” in “Shakespeare.” His use of language is what makes Shakespeare great; most of Shakespeare’s plots, however, were borrowed or adapted or stolen from other sources. The ride Shakespeare wants us to take is in the words. The kind of language he wrote for the characters in R&J is beautiful and poetic and bawdy and full of life, which is perfect for the story this play tells. West Side Story is not Shakespeare; its plot is similar to R&J, which is similar to may tales told long before Shakespeare; but West Side Story does not have these wonderfully rich words. We hope you let us take you on this ride and let the language envelope you in the love, the friendship, the humor, the rage, the ache, the fun that make this play as exciting and relevant today as it was four hundred years ago.