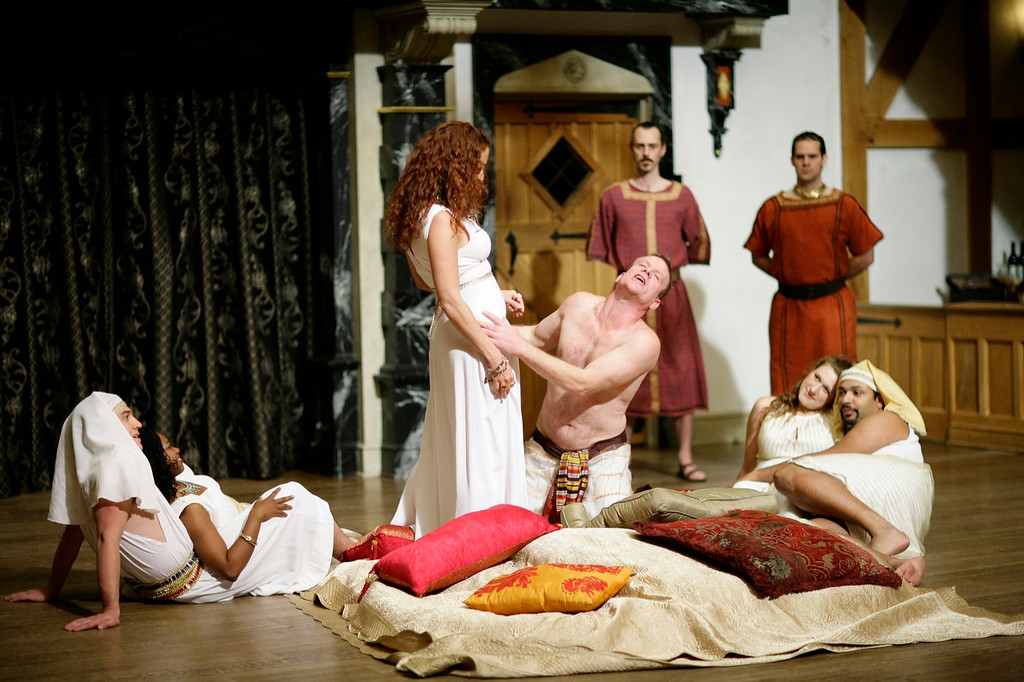 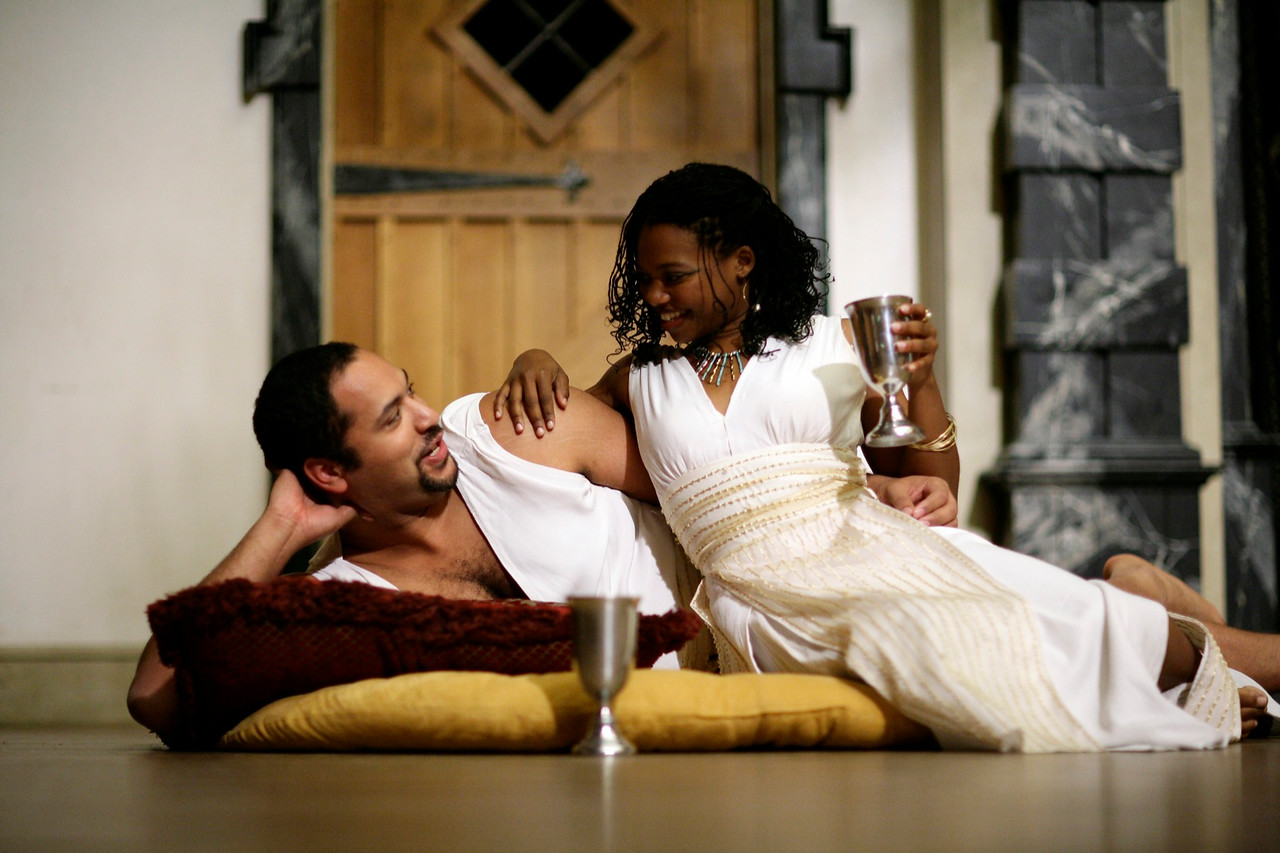 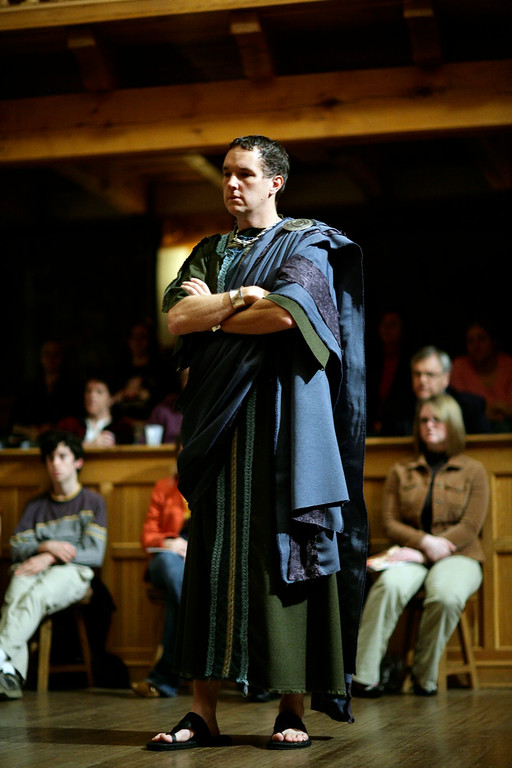 John Harrell in ANTONY AND CLEOPATRA. Photo by TOMMY THOMPSON. 2007. 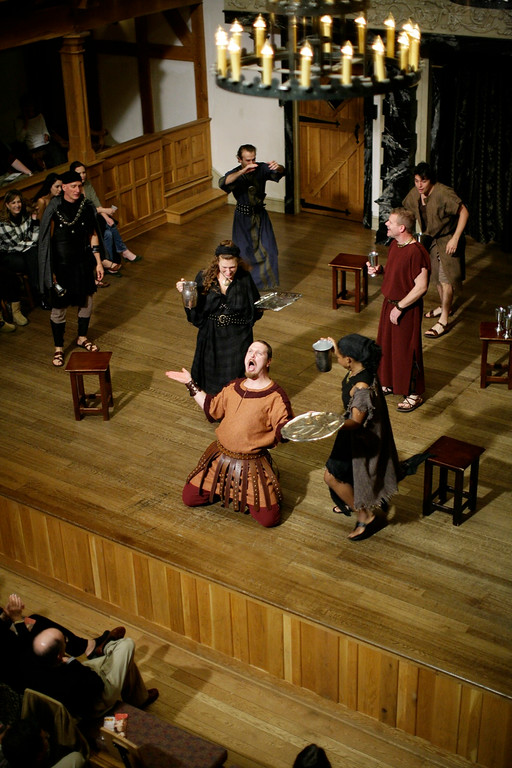 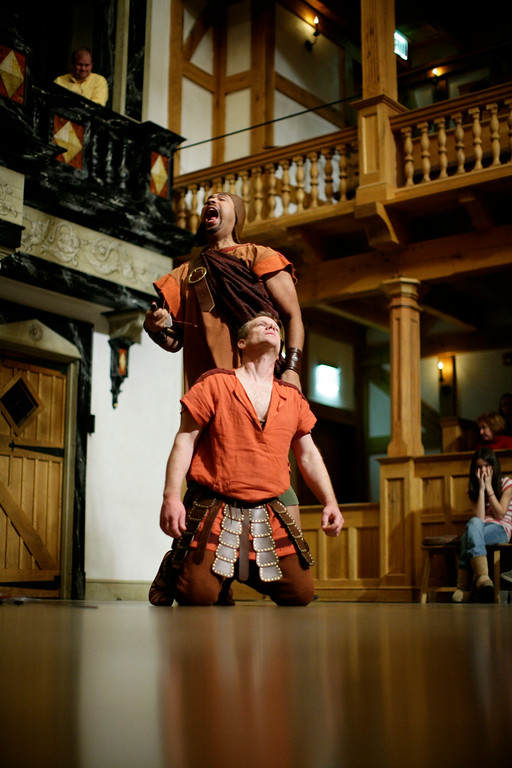 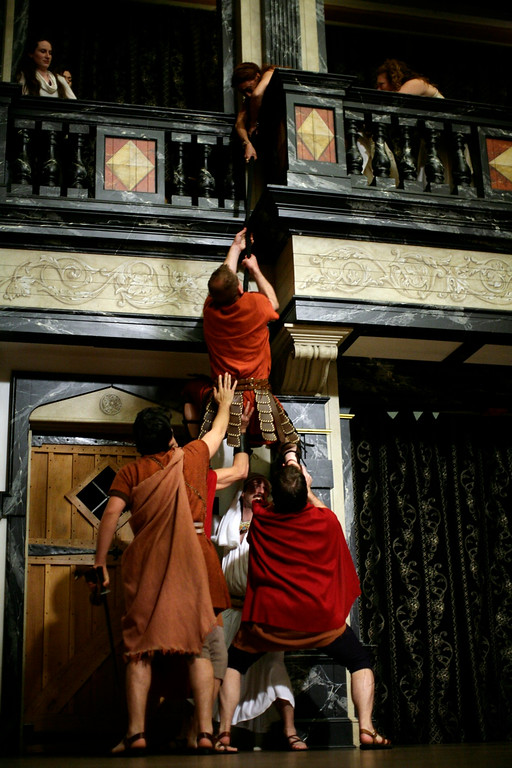 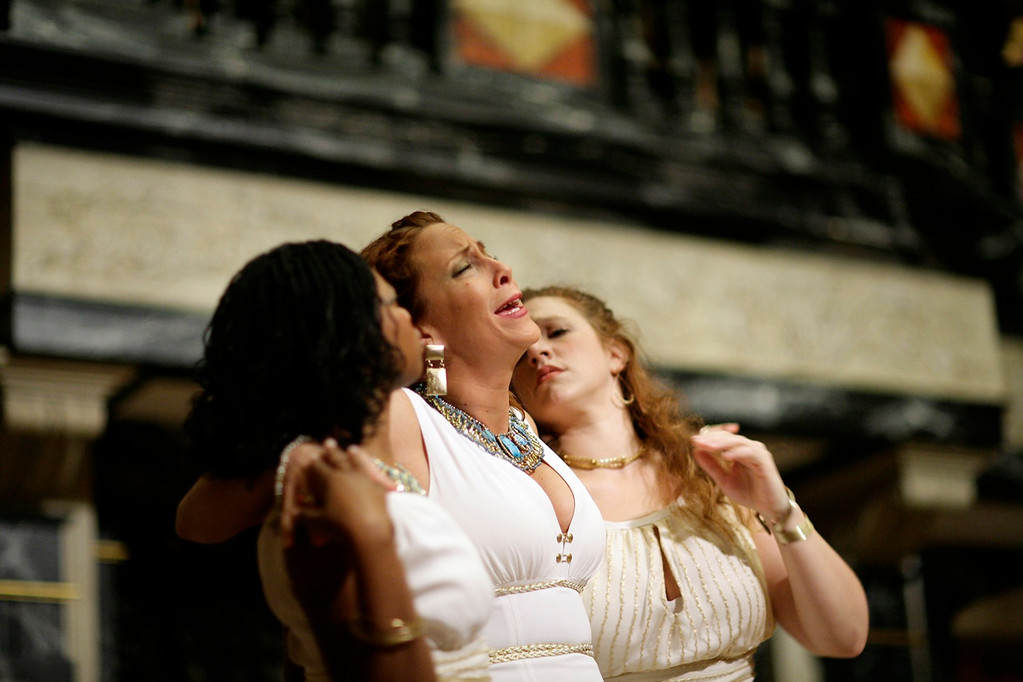 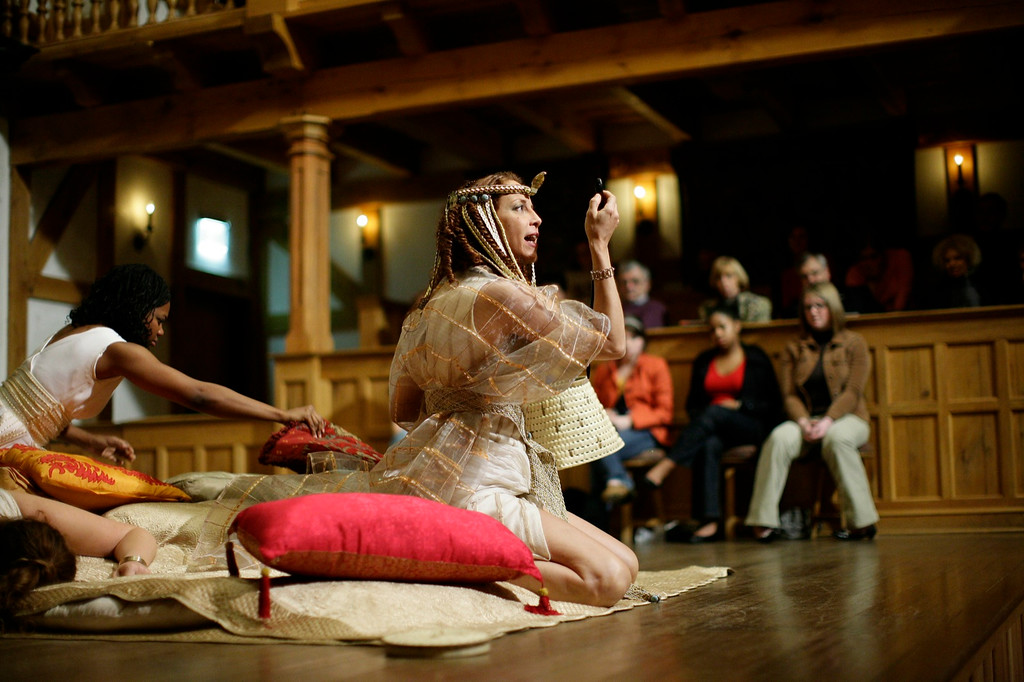 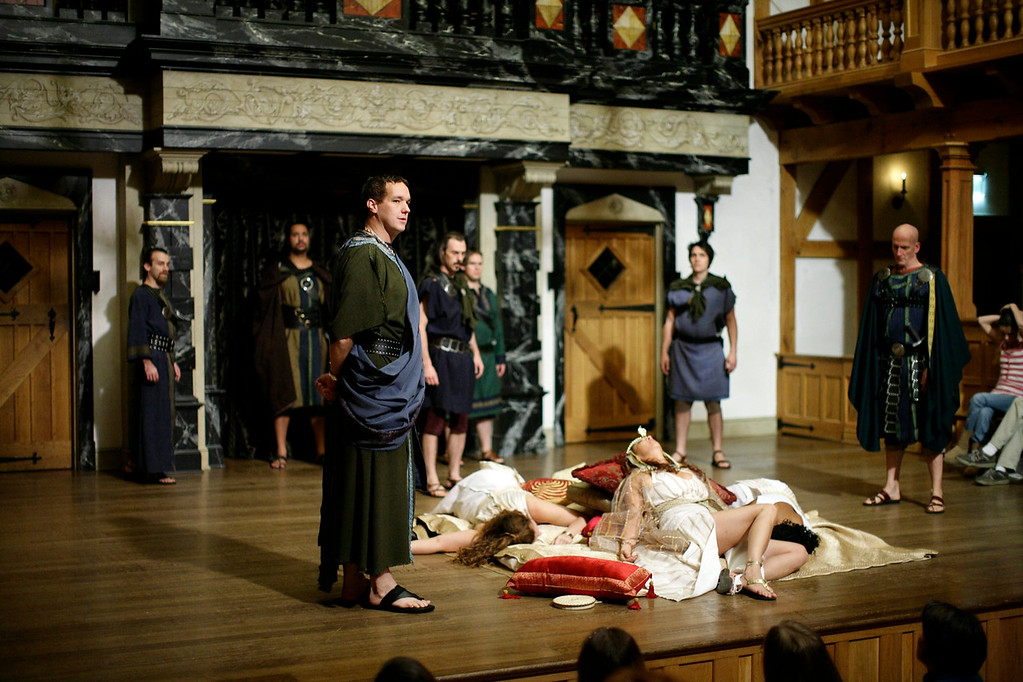 People say I’m crazy doing what I’m doing
Well they give me all kinds of warnings to save me from ruin
When I say that I’m o.k., well they look at me kind of strange:
Surely you’re not happy now you no longer play the game…
John Lennon

I’m going to steal much of this essay from Dr. Ralph Alan Cohen’s recently published book ShakesFear and How to Cure It. Go buy the book. It’s available in our gift shop in the lobby. Go now.

As I said in the notes I wrote for Romeo and Juliet (Have you seen our current production of that play? If not, while you’re in the lobby buying Ralph’s book, get tickets for that play too.) I got to know Ralph Cohen after he cast me as Enobarbus in a college production of A&C. Being in that play changed my thinking, my education, and my life in many ways. I was a sophomore, I was new to acting, and the largest character I had played at that point was Little Bear, the new World’s Greatest Dancing Bear in Aurand Harris’s The Arkansaw Bear. Dr. Cohen began our first rehearsal of A&C by saying something very similar to what he writes at the beginning of the A&C section of his book:

A&C is my favorite work of art: in my view, the most sublime work of the hand of man. A&C is my favorite work of art because it encompasses the world. Consider the opposites it embraces: man and woman, East and West, war and peace, work and play, sex and love, fortune and happiness, life and death. And, using laughter, it sneaks all this wisdom past every obstacle our society has raised against it.

Luckily, being young and inexperienced allowed me to be blissfully ignorant of the pressure I should have felt playing Antony’s right hand man for a director who revered this piece of art so dearly. I didn’t know much about the play, Shakespeare, or acting, I also wasn’t smart enough to be scared, so I got the education of the lifetime as I allowed this director to fill me with his love for this play and his vision of the story. Because I didn’t have preconceptions about what “should” and “shouldn’t” happen in a “Shakespearean tragedy,” the laughter that Ralph writes about seemed perfectly at home and “right” to me. My experience in that production was followed by a series of other Shakespeare shows, classes, studying in London, directing Shakespeare for my honors thesis, and, eventually, Ralph and I started a professional company that has grown into the American Shakespeare Center.

Now in its twentieth year of “doing it with the lights on,” the ASC continues to show the world how much comedy Shakespeare wrote into his drama and how much drama he put into his comedies. If you think laughter doesn’t belong in Shakespeare’s tragedies, I’m glad you’re here to join us for our production of The Comedy of Antony and Cleopatra.

I’m just sitting here watching the wheels go round and round,
I really love to watch them roll.
No longer riding on the merry-go-round…I just had to let it go.
John Lennon

Another indelible mark Ralph seared into my consciousness during early rehearsals of that 1985 college production is also part of his book (have I mentioned that Ralph wrote a book?) where he is giving teachers tools for teaching A&C to their students:

Tell them that once there was a rock star in a band with three other young men and that the four of the owned the rock-and-roll world. They were amassing unheard-of fortunes, and every day their fame grew. No one in the world of entertainment was more powerful than their partnership, and they were conquering whole new worlds – film, books, TV. Then the rock star met a woman. She was almost ten years older than he; she was a different race; and she did wild and weird and stupid things. The other members of the group did not like her, and the rock star was spending more and more time with her. And then, because of his feelings for her, he shocked the world by leaving the band and breaking up the partnership.

Go buy the book and read the rest of what Ralph writes under the topic of “A Modern Parable of Shakespeare’s Play” (you can also find it on amazon.com). By drawing the parallels between John Lennon/Yoko Ono and Antony/Cleopatra, Ralph deftly accomplished the often impossible: he taught a college kid that Shakespeare is as immediate, recognizable, and visceral as rock and roll. Shakespeare may have written his plays four hundred years ago, but he tapped into that part of humanity and truth not confined to a single age o era. Twenty-two years ago I learned that Shakespeare is cool because of that director teaching me about this play; with this production, my greatest hope is that I can pay it forward.