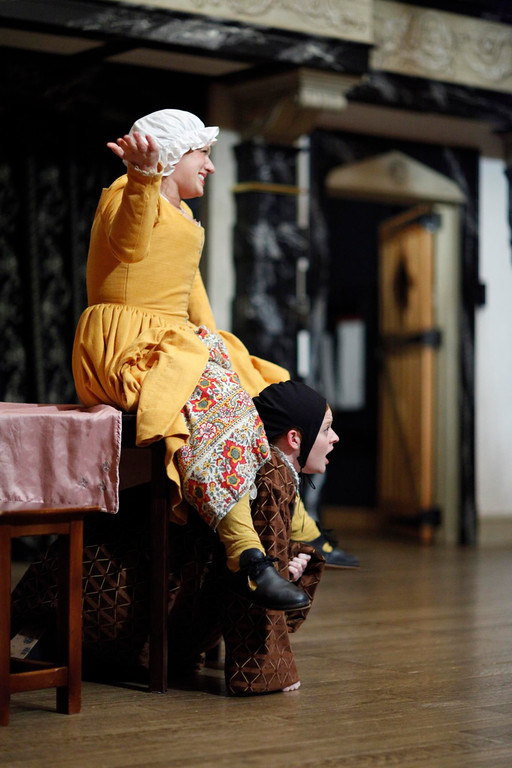 Allison Glenzer and Erin Baird in THE MERRY WIVES OF WINDSOR. Photo by TOMMY THOMPSON. 2009. 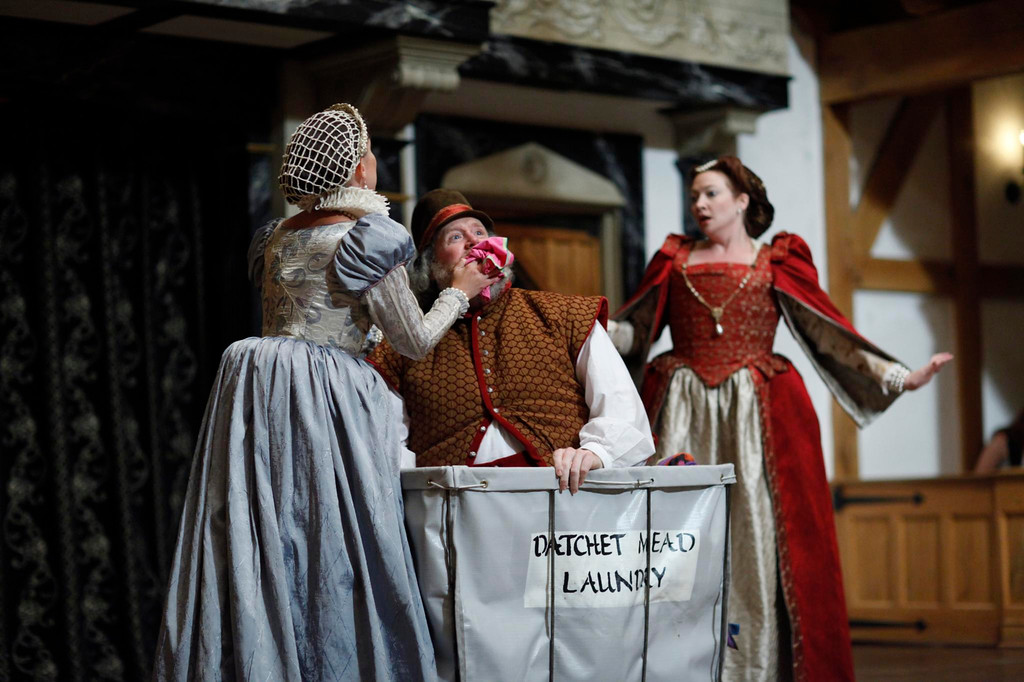 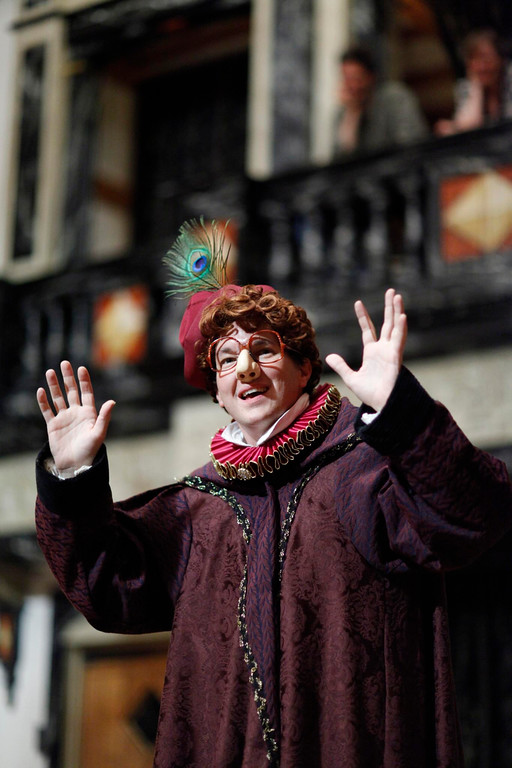 John Harrell in THE MERRY WIVES OF WINDSOR. Photo by TOMMY THOMPSON. 2009. 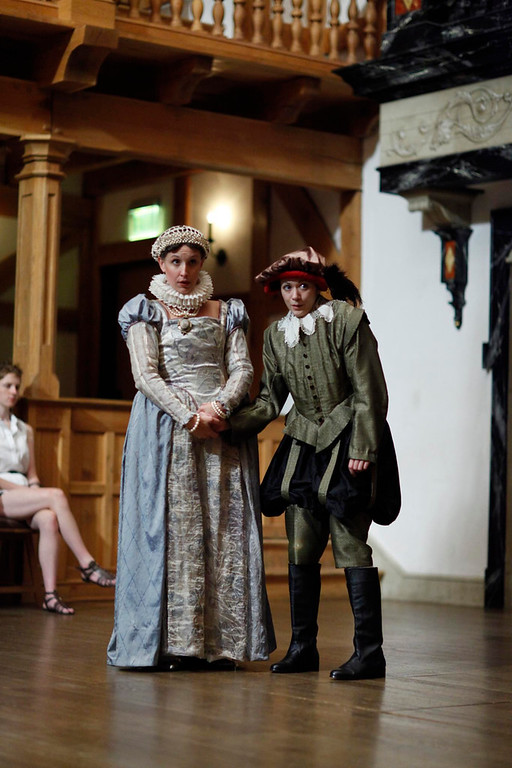 Denice Burbach and Victoria Reinsel in THE MERRY WIVES OF WINDSOR. Photo by TOMMY THOMPSON. 2009. 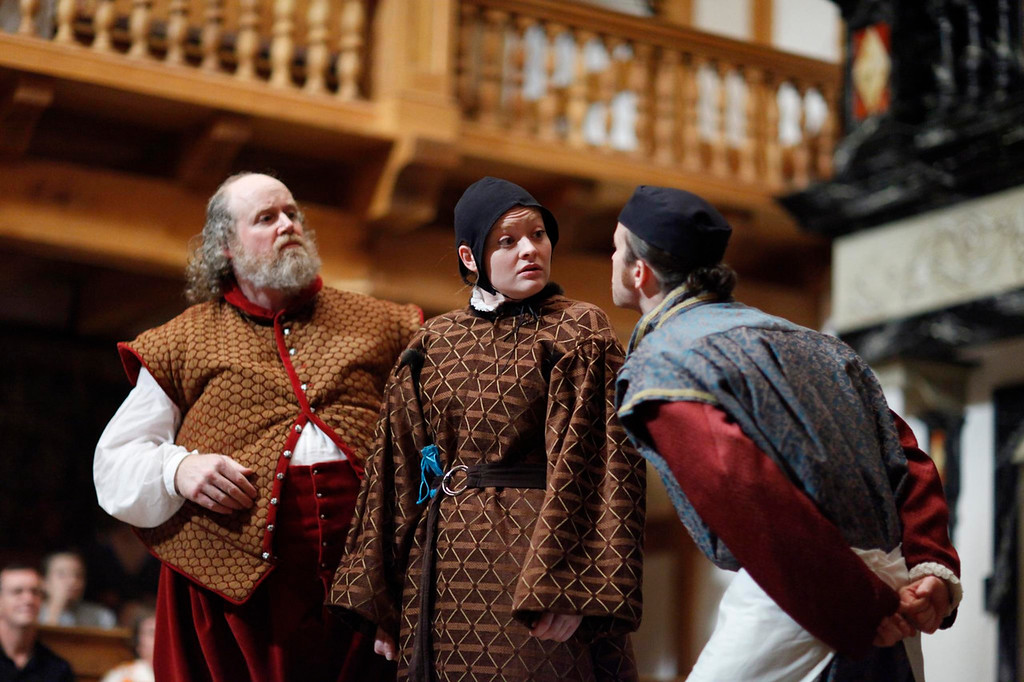 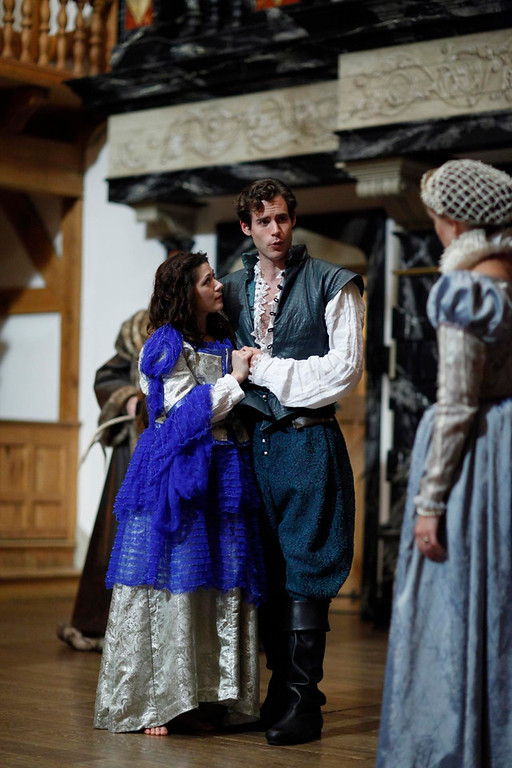 Victoria Reinsel and Tobias Shaw in THE MERRY WIVES OF WINDSOR. Photo by TOMMY THOMPSON. 2009. 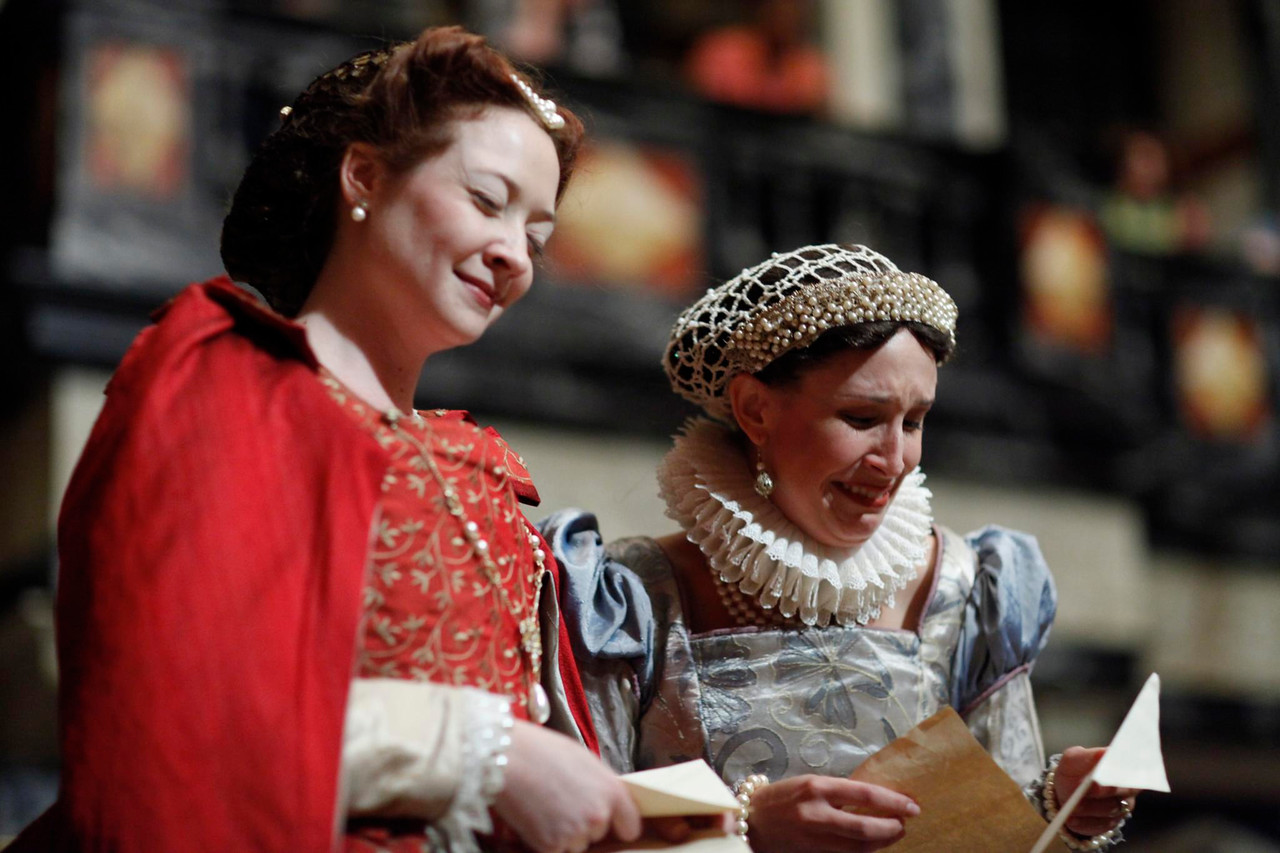 Sarah Fallon and Denice Burbach in THE MERRY WIVES OF WINDSOR. Photo by TOMMY THOMPSON. 2009. 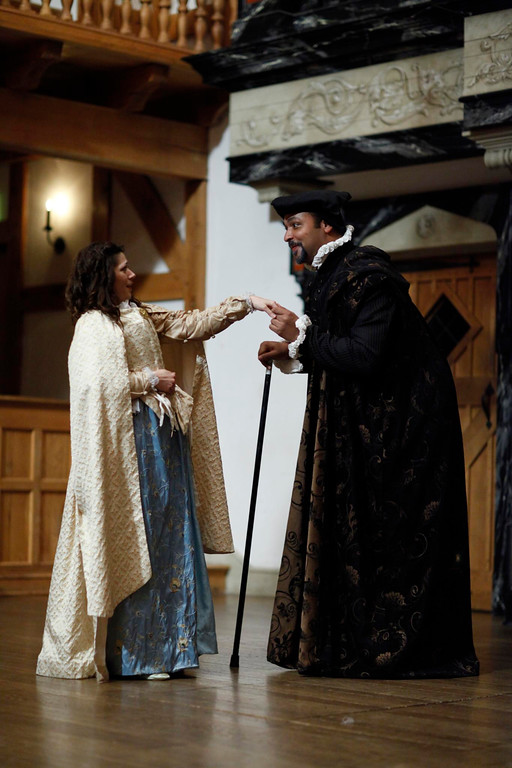 Victoria Reinsel and René Thornton, Jr. in THE MERRY WIVES OF WINDSOR. Photo by TOMMY THOMPSON. 2009. 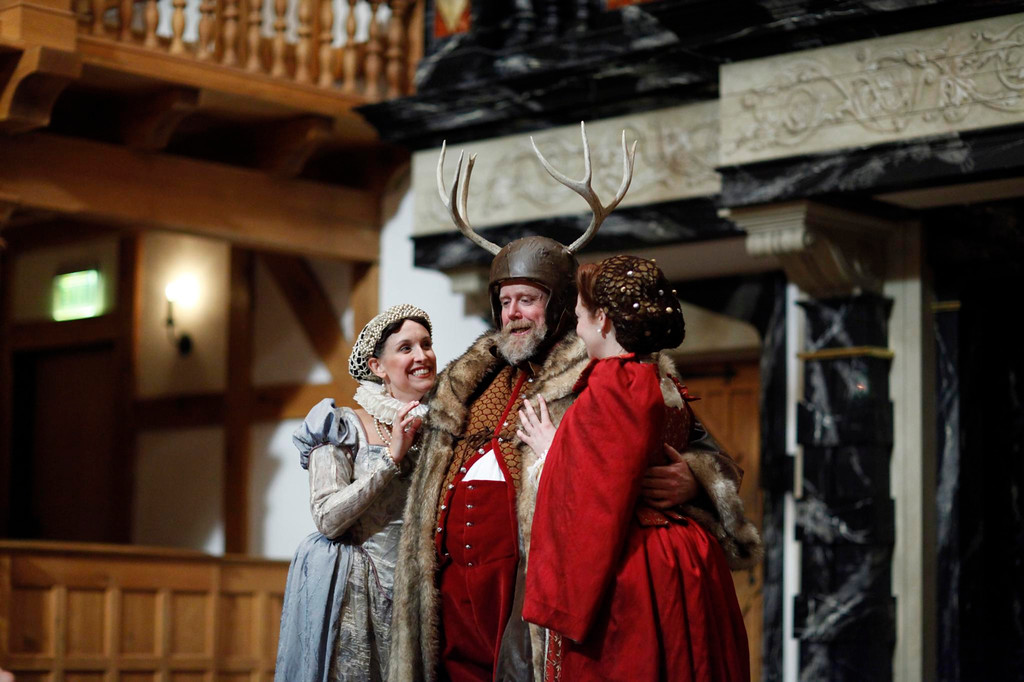 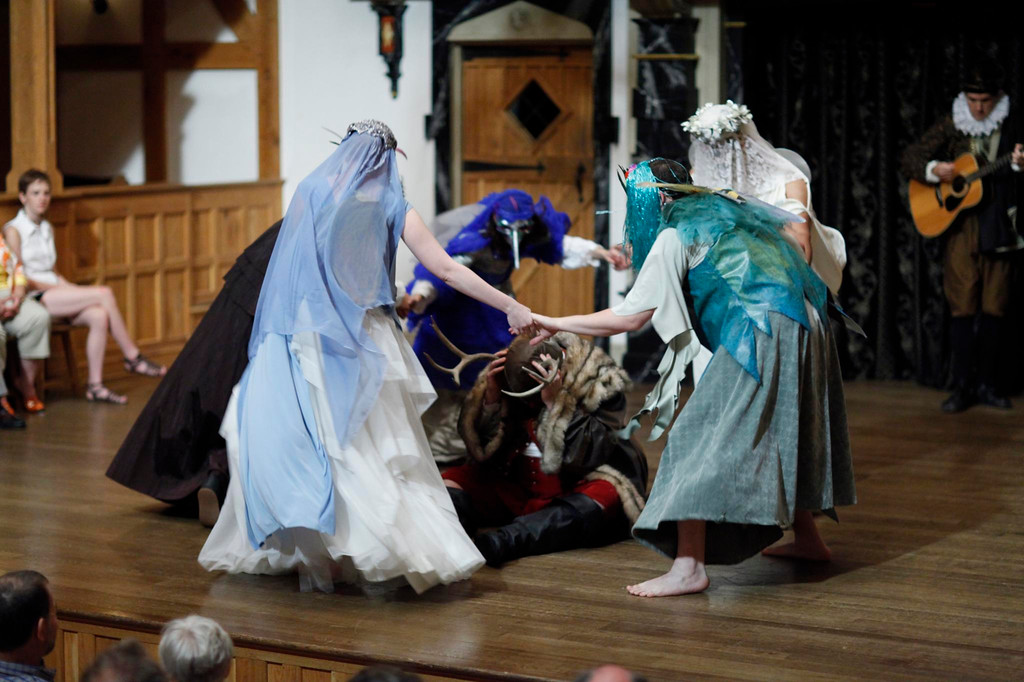 The cast of THE MERRY WIVES OF WINDSOR. Photo by TOMMY THOMPSON. 2009.

Some things most directors or dramaturges WILL tell you about Merry Wives in program notes:

Something most directors or dramaturges WILL NOT tell you about Merry Wives in program notes:

In preparing the text for this production, I was surprised to rediscover just how wonderful a script Merry Wives is. I’ve seen some lovely productions (the 1985 RSC “1950’s” production with the wives under hairdryers and the 2008 Elizabethan production at Shakespeare’s Globe in London, to name just two) and I’ve seen for myself how funny it is, how crowd-pleasing it can be, what a wacky and enjoyable night of sitcom theatre it can create. But what struck me most in prepping for the 2009 ASC production was just how good of a comic story it really is.

Sitcoms on tv today come in all shapes and sizes. But most of us think of the stock situations (the domestic family room, the work place, the high school, the hang-out joint, et.), the stock characters that populate these places, and the stock laugh track (or the supposed studio audience) punctuating every few phrases that end with zingers so obvious that they seem written with a highlighter. Although the sitcom is an art form that often seems to suffer from little art and stale form, you can track its evolution through classics from I Love Lucy and The Honeymooners to Father Knows Best and The Dick Van Dyke Show to some of the groundbreaking stuff in All in the Family and early M*A*S*H up through Taxi, The Cosby Show, Cheers, Seinfeld, and Friends. Today, with reality shows supplanting sitcoms as tv titans, cable shows like Curb Your Enthusiasm and Arrested Development reinvigorated the art form by losing the laugh track, writing (in some cases) better characters/jokes, and they have passed some of these qualities on to “regular” network shows like Scrubs and The Office. Even if you don’t like the shows listed here, you can think of dozens of other shows from those eras that were wonderful and dozens more that were forgettable or horrible.

My point in mentioning the cornucopia of sitcoms is to demonstrate that “sitcom” doesn’t have to mean thin, obvious, or barely funny. Even terms like “stock” or “obvious” don’t speak to “quality” because stock characters might be able to deliver obvious jokes with a kind of timing, dexterity, and panache that still produce good laughs and help tell an entertaining story.

Merry Wives is simply a better play than most productions allow it to be. I think it should feel more like a great, offbeat, romantic comedy film than what many people think of as a “sitcom.” It doesn’t have the darker dramatic core of Much Ado, but it rises above the fluff of The Comedy of Errors to hit more of the scope found in As You Like It. Shakespeare gives us smart, funny women in Merry Wives who are dismissed and undervalued by the men in their world; in the end, of course, these women outwit, outlast, and outplay the men and teach them a lesson about understanding the female sex. And whatever gave Shakespeare the push to write the Falstaff we find in Merry Wives, this complex character is much more intriguing than most sitcom buffoons. And even though some will argue that the Falstaff from Merry Wives is a much different character than the one in Henry IV, Part 1 (you could make the same argument about Michael Corleone in the Godfather films), seeing those two plays in our Summer Season will let you make up your mind.

Although I am directing Merry Wives and my ASC Co-founder Ralph Alan Cohen is directing Henry IV, Part 1 as two independent productions, we are doing these shows in repertory with the same actors and using some of the same Elizabethan/Jacobean costumes in both shows. I am resisting the urge to pull Merry Wives into some kind of hyper-wacky world that would deliberately highlight the differences between the two plays because I don’t think that’s what Shakespeare’s troupe did. I think Merry Wives contains a genuine warmth and dimension that few productions of it seem to think it has; I think we need to draw these characters in a way that allows the audience to care about them; I think we need to plumb the script for the jokes, the story, the wackiness, and the heart that all live there. We don’t need a “concept” to help make “poor, old Shakespeare’s stale sitcom” funny for a modern audience. The actors and audience who first experienced these characters Shakespeare created in Merry Wives and Henry IV didn’t need “help” to perform or enjoy these two titles on back to back nights, so neither do we. I hope this righteous romp through Windsor will surprise and delight you in performance as much as it has dazzled and tickled me in prepping for rehearsals.