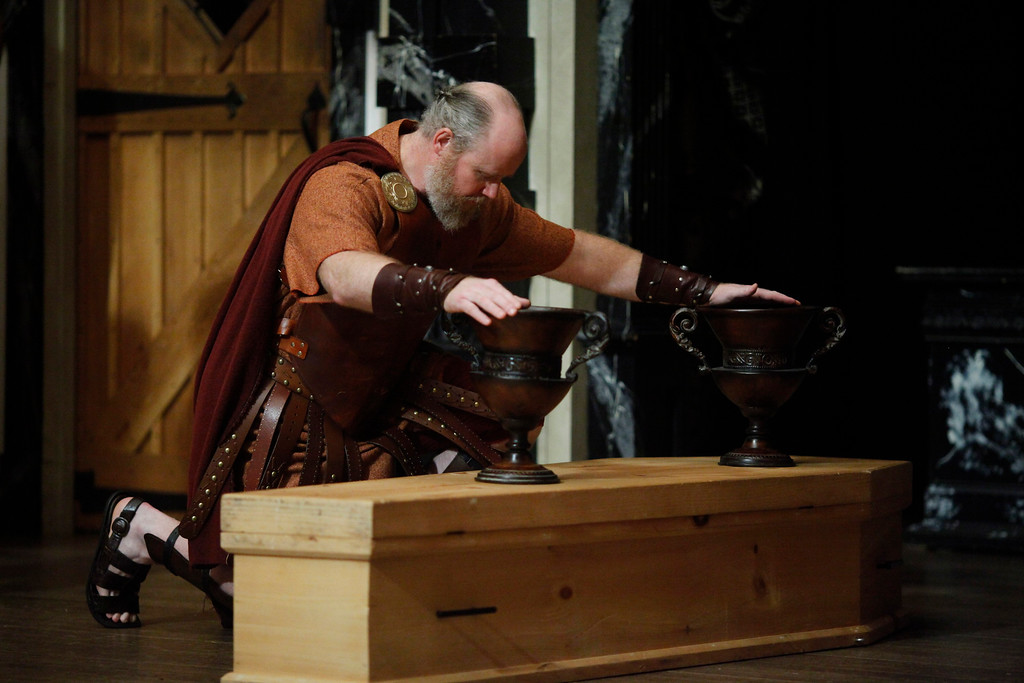 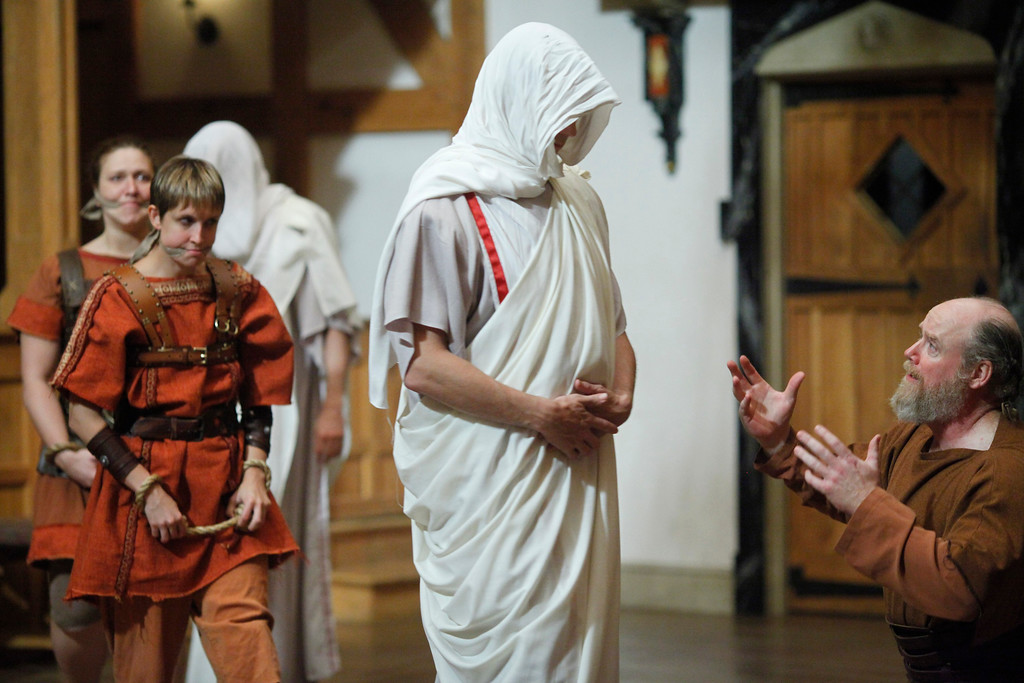 The cast of TITUS ANDRONICUS. Photo by TOMMY THOMPSON. 2009. 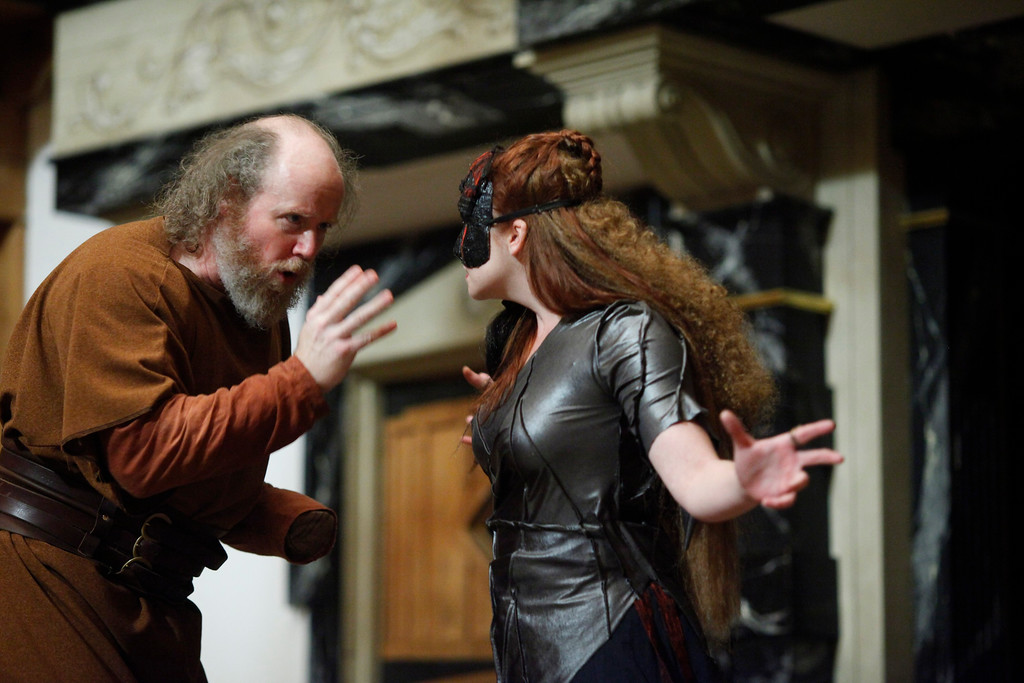 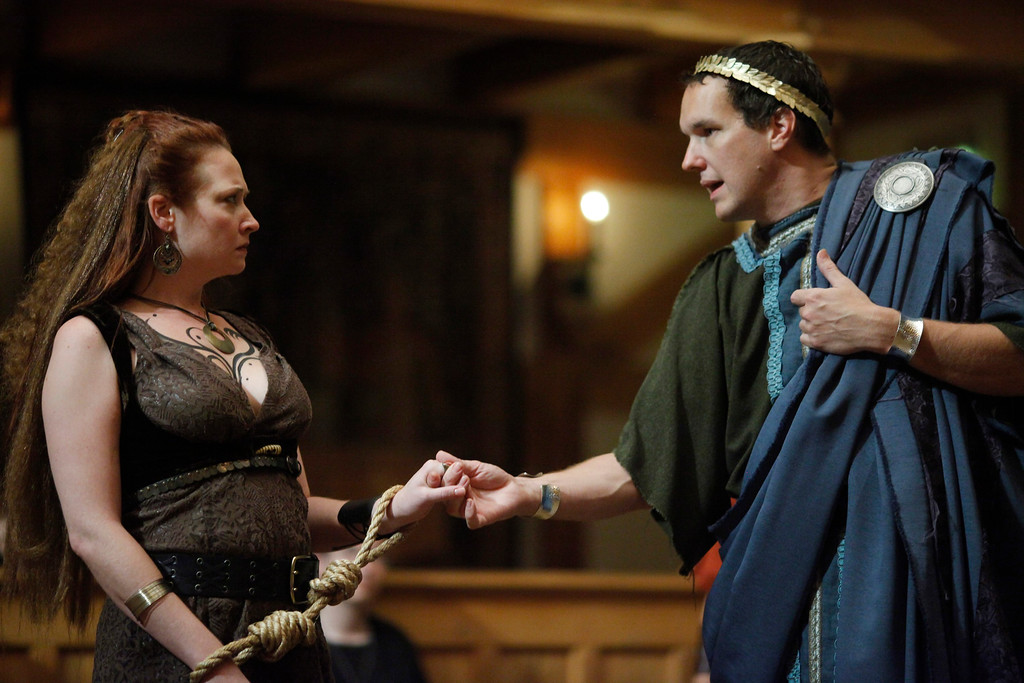 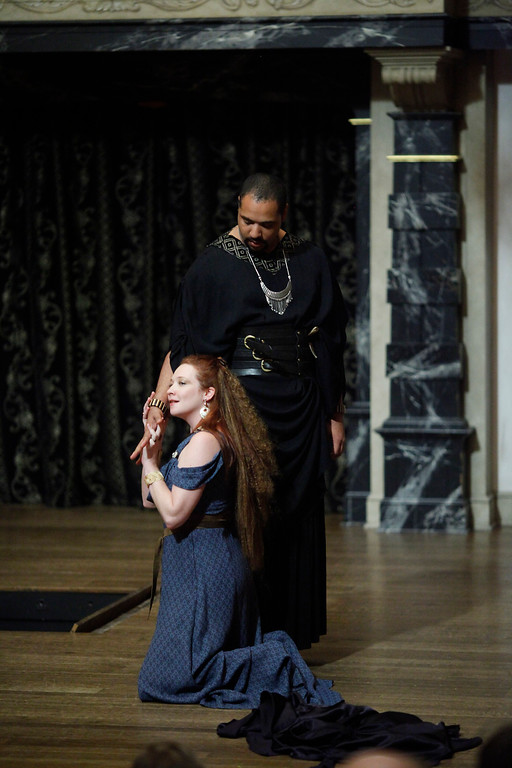 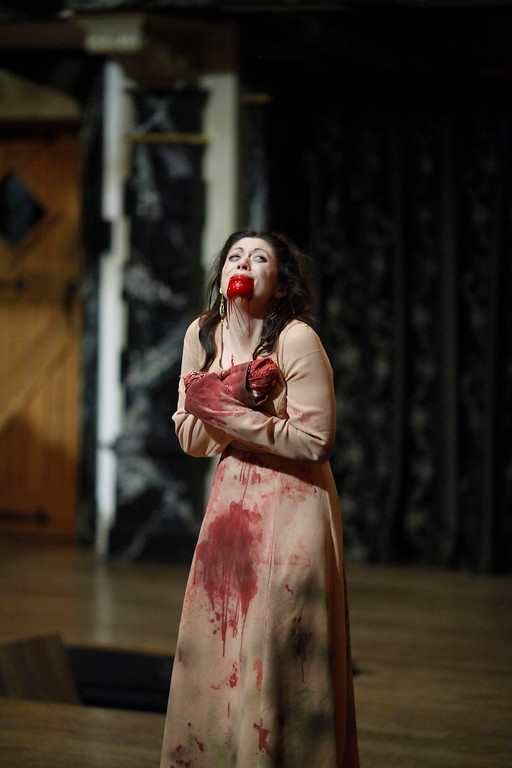 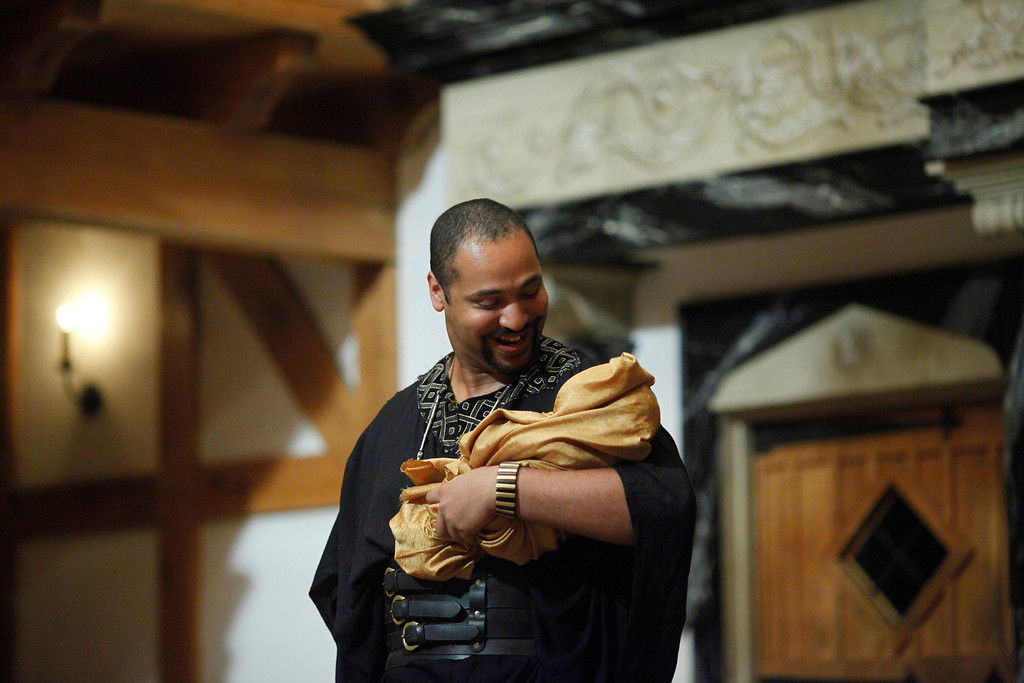 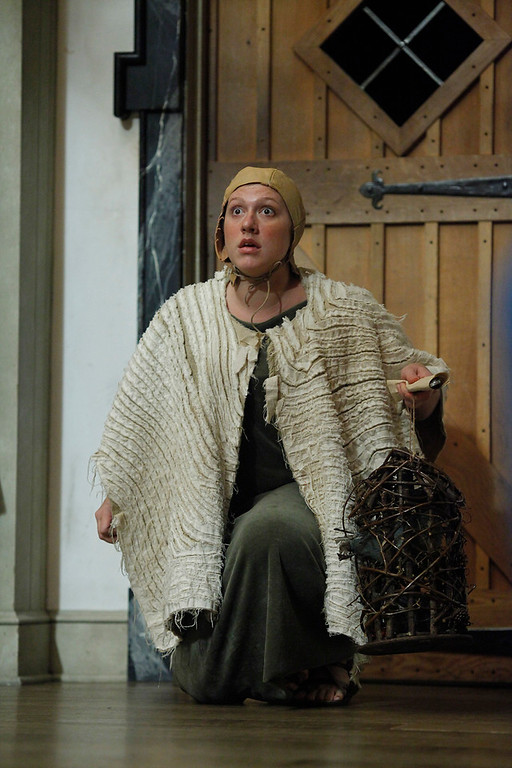 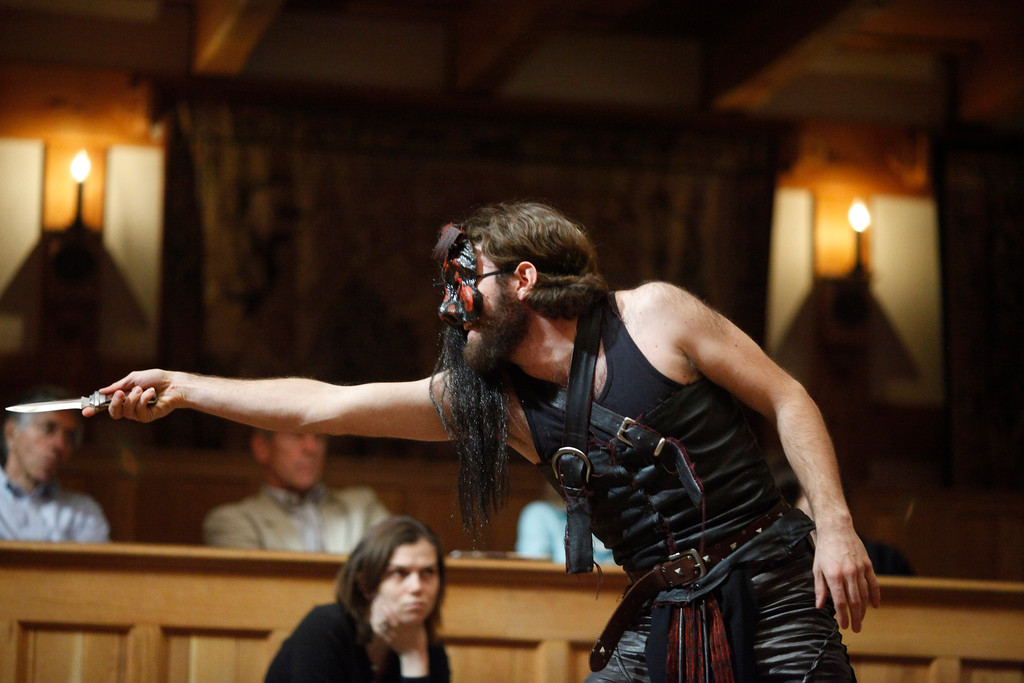 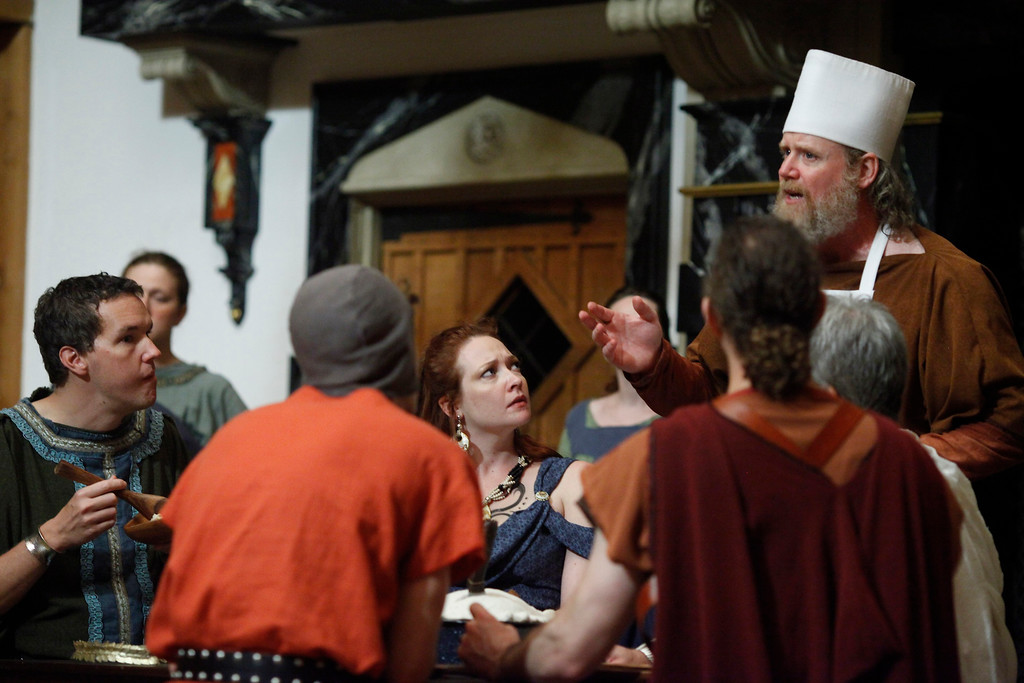 The cast of TITUS ANDRONICUS. Photo by TOMMY THOMPSON. 2009.

stuff that happens before the play

The Emperor of Rome has died, leaving behind two sons, Saturninus and Bassianus.

The great Roman general, Titus Andronicus, is victorious in the brutal wars against the Goth armies.

Saturninus, the elder brother, and Bassianus both desire to be elected Emperor of Rome.

Marcus Andronicus announces that the people of Rome have chosen his brother, Titus, to be the new Emperor.

Titus arrives in Rome with four of his sons and the corpse of another, his twenty-first son to die in war.

Titus also arrives with his prisoners, Tamora (Queen of Goths), her three sons, and her lover, Aaron.

To avenge the death of his son, Titus chooses Tamora’s eldest son to be sacrificed. With “a mother’s tears in passion for her son,” Tamora begs Titus for mercy. He refuses. The sacrifice will be made and “die he must.”

Upon learning that he has been elected Emperor, Titus declines the office. “Give me a staff of honor…but not a scepter to control the world.” He asks that Saturninus become Emperor.

Saturninus promises to make Lavinia, Titus’s daughter, his Emperess. Almost immediately, however, he is charmed by Tamora and chooses her over Lavinia.

Bassianus claims Lavinia for his wife. Marcus declares “this prince in justice seizeth but his own” and leaves with Bassianus and Lavinia.

Titus, enraged, tries to go after Lavinia, but is stopped by his son Mutius. Titus kills Mutius.

Now free (and the Roman Emperess), Tamora publicly proclaims to “let all quarrels die” with Titus and his family. Privately, however, she vows to “find a day to massacre them all.”

Fierce love of family and the cycles of revenge and retaliation ensue.

Titus Andronicus is a great play. Period.
End of essay, enjoy the show.

Ah, but I guess I should write more because I feel so passionately that this great play doesn’t get the love it deserves.

v. 17 Never pay back evil for evil to anyone. Respect what is right in the sight of all men.

The first performance record we have for Titus is in January 1594 at Henslowe’s Rose theatre by the Lord Admiral’s Men. (Which means, if you know your Shakespeare in Love, that Ben Affleck was probably the first actor to perform the role of Titus!)

Shakespeare wrote Titus after two box office bonanzas written by other playwrights altered the landscape of English drama: The Spanish Tragedy by Thomas Kyd and Tamburlaine the Great by Christopher Marlowe. Young(ish) Shakespeare and the rest of the London theatre world were most likely bowled over by these plays that generated a lot of money, many repeat performances, and multiple copy-cat plays trying to capitalize on their sensational, sometimes gory plots. (If Law and Order is a success, how about multiple versions of it plus multiple versions of CSI and half a dozen more copy cats?)

v. 19  Never take your own revenge, beloved, but leave room for the wrath of God, for it is written, “Vengeance is Mine, I will repay,” says the Lord.

Throughout the period of 1592-94, outbreaks of the plague and repeated closings of the public playhouses led to erratic theatre seasons in London and longer periods of touring for the acting companies. By the summer of 1594, the plague dissipated, the public playhouses reopened, the Admiral’s Men returned to the Rose at Bankside, and Titus had become the property of the fairly new Lord Chamberlain’s Men in residence at the Theatre, north of the city. Performance records of the Chamberlain’s Men are not clear, but two more quarto editions of Titus published in 1600 and 1611 suggest it was a very popular, successful play. Shakespeare seems to have joined the Chamberlain’s Men around this time, brought Titus with him, and set off on the next stage of his career, during which he wrote his most famous plays for Richard Burbage and the company that would eventually operate in the Globe and the Blackfriars, and have King James as its patron.

Those who think Titus is a “bad play that’s not good enough for their Shakespeare to have written by himself” desperately cling to arguments that push the writing date earlier than 1592 and suggest that Shakespeare collaborated with other playwrights. If you are a Titus-hater and/or you think Shakespeare must have had help in writing this “inferior” play, I urge you to read Jonathan Bate’s Introduction to his 1995 Arden Third Series edition of Titus. Bates makes great arguments for Shakespeare’s sole authorship of this career-changing play.

v. 20 But if your enemy is hungry, feed him, and if he is thirsty, give him drink; for in doing so you will heap burning coals upon his head.

I have wanted to direct Titus for years. As we began plans to build the Blackfriars Playhouse back in the mid/late 1990s, I knew that I wanted to direct a bloody production of Titus, and I didn’t want to try and tour with messy blood and inconsistent laundry facilities. As we began developing twelve-month programming for the Blackfriars, we knew that we had to seek balance between popular titles, titles they teach in school, and titles more off the beaten path. The birth of our Actors’ Renaissance Season five years ago has allowed us to explore many rarely (or never) performed titles and we’ve built up an audience with a healthy thirst for great plays that are produced less often. The final piece of the “Do Titus” puzzle fell into place last year when I directed King Lear with 1) James Keegan in the title role and 2) a heaping helping of blood and in-your-face-violence (thanks to Colleen Kelly). To create the kind of Lear I was after (which I thought would pave the way for tackling Titus), I knew we’d have to be successful with a powerful performance in the title role and reach some new heights with blood and violence. I think we did that. So now here we are.

v. 21 Do not be overcome by evil, but overcome evil with good.

I’m writing all this stuff more than a month before the Summer Season actors arrive and we begin working on Much Ado, followed by Merry Wives, followed by Titus. I’m delighted to have such a wonderful group of actors coming to do all three of these shows. I’m thrilled to have a crack at this remarkable script and story that will be new to a large part of our audience. If we end up with a so-so production of Shakespeare’s great, first tragedy, it won’t be because the play is weak or because Shakespeare didn’t write all of it solo; it will be because I suck. Here’s to not sucking.