A group of amorous English exiles revel through Naples during Carnival in this witty comedy featuring disguises, thefts, catfights, and lovestruck antics of all kinds. Writing in the wanton atmosphere of the Restoration, Behn was one of England’s first professional female writers, and her voice shines in her heroines, including a reluctant nun, a famous courtesan, and a thieving wench. 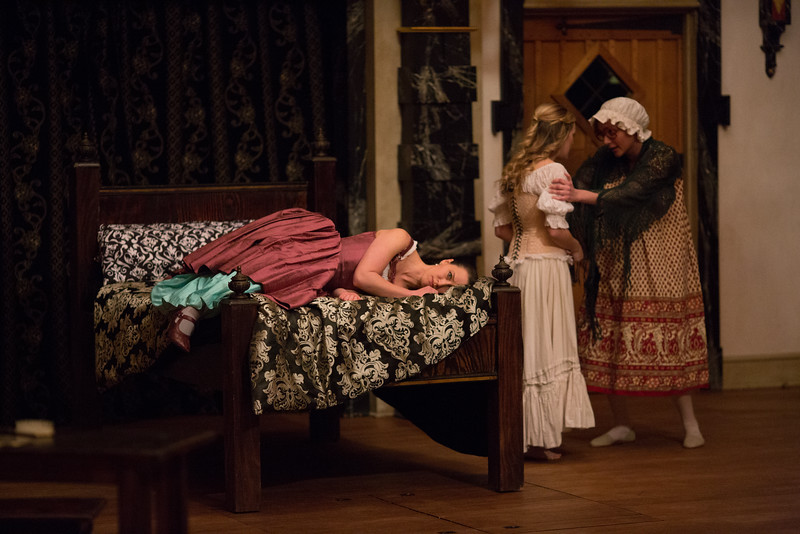 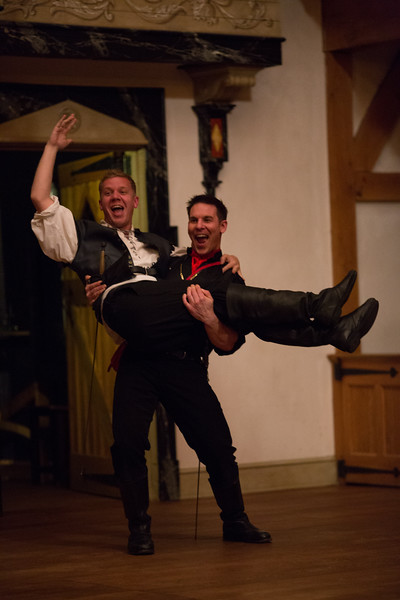 Benjamin Reed and Patrick Midgely in THE ROVER. Photo by LINDSEY WALTERS. 2015. 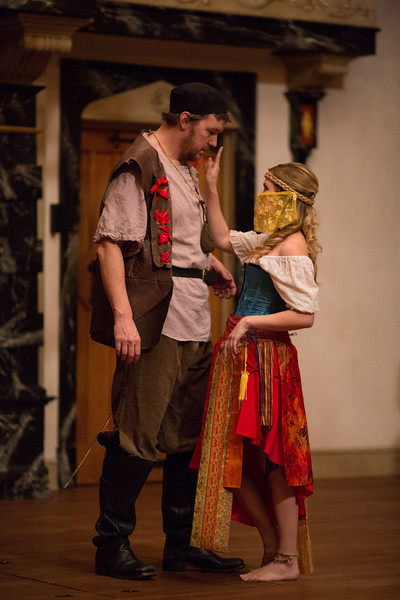 John Harrell and Lauren Ballard in THE ROVER. Photo by LINDSEY WALTERS. 2015. 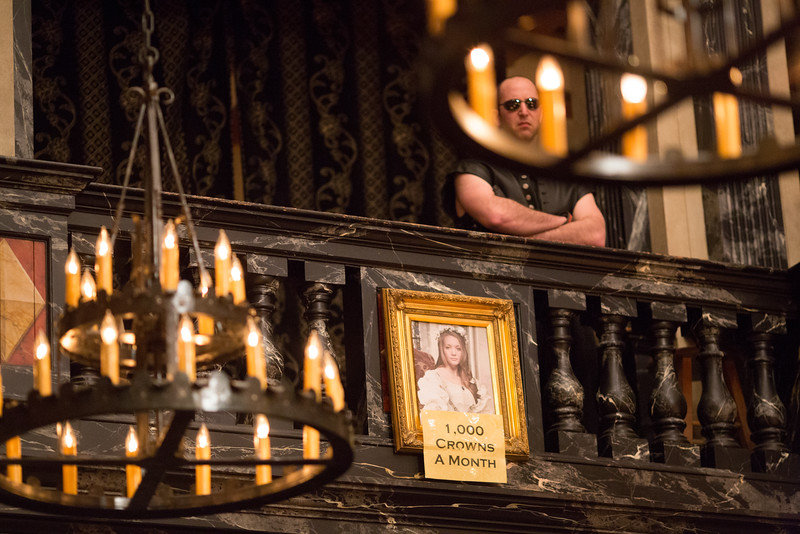 Michael Amendola in THE ROVER. Photo by LINDSEY WALTERS. 2015. 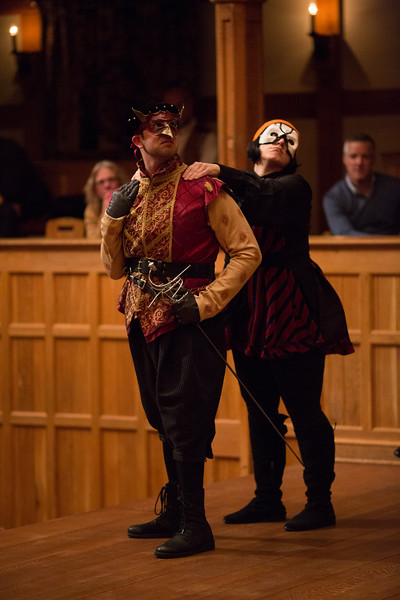 Michael Amendola and Allison Glenzer in THE ROVER. Photo by LINDSEY WALTERS. 2015. 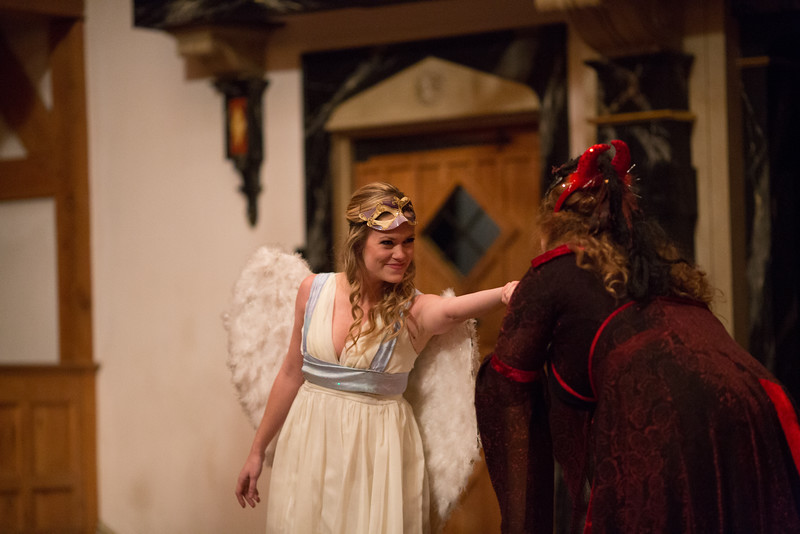 Lauren Ballard and Allison Glenzer in THE ROVER. Photo by LINDSEY WALTERS. 2015. 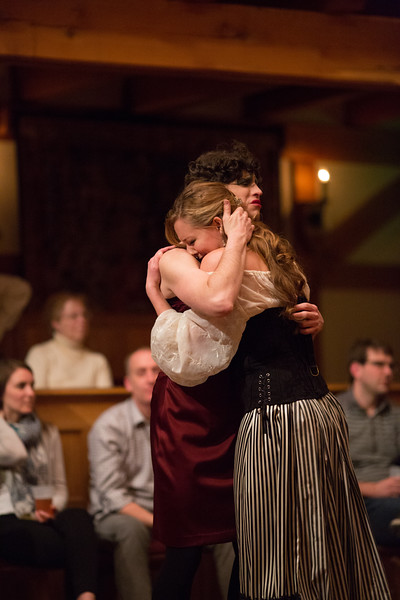 Chris Johnston and Sara Hymes in THE ROVER. Photo by LINDSEY WALTERS. 2015. 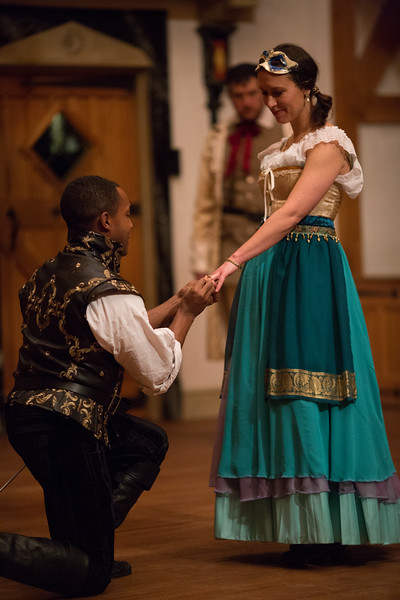 Nathan C. Crocker and Bridget Rue in THE ROVER. Photo by LINDSEY WALTERS. 2015. 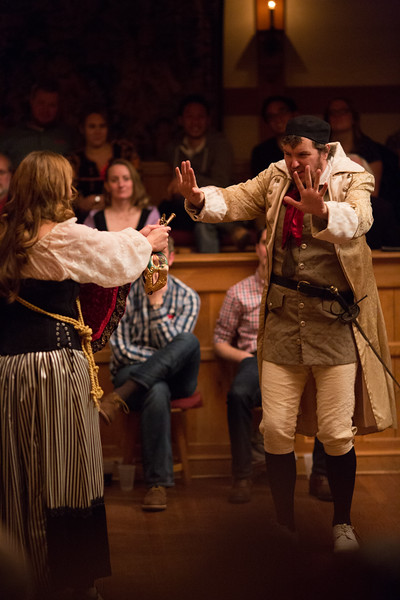 Sara Hymes and John Harrell in THE ROVER. Photo by LINDSEY WALTERS. 2015. 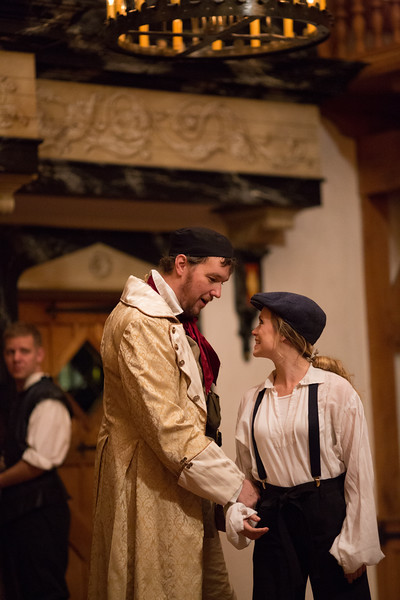 John Harrell and Lauren Ballard in THE ROVER. Photo by LINDSEY WALTERS. 2015.

2. Where was the play first performed?
At the Dorset Garden Theatre in London by the Duke’s Company on March 24, 1677. Under the patronage of Prince James, Duke of York and Albany, later became King James II, the Duke’s Company had exclusive rights to perform ten of Shakespeare’s plays (including Hamlet, Macbeth, King Lear, and Romeo and Juliet).

3. Who wrote it?
Aphra Behn, England’s first professional female playwright, was born in Kent in 1640. At 23, she traveled with her family to the West Indies and used her time in the New World as source material for a popular novella, Oroonoko; or, The Royal Slave (1688). Some sources claim that during the early 1660s she worked as a spy in the Netherlands for Charles II. She returned to England in 1667 and to pay her bills she began writing. In her preface to The Lucky Chance (1686), she wrote, “All I ask, is for the privilege for my masculine part, the poet in me…to tread in those successful paths my predecessors have long thrived in…If I must not, because of my sex, have this freedom, but that you will usurp all to yourselves; I [will] lay down my Quill and you shall hear no more of me.” Behn died in 1689 and is buried in Westminster Abbey.

4. How is this playwright like Shakespeare?
Behn used ideas from existing works and improved upon them. The Rover, for example, was based on Thomas Killigrew’s play Thomaso, or The Wanderer (1664). Like Shakespeare she has a strong awareness of her audience, and her plays rely on the idea that actors and audience can see one another.

5. How is this playwright unlike Shakespeare?
The Rover was first performed 61 years, two kings, a Civil War, an interregnum, and a Great Fire after Shakespeare’s death. Behn’s world was very different than Shakespeare’s, and her work reflects fact. Most obviously, Aphra Behn was a woman with a different perspective on gender relations.

6. What do scholars think about this play?
Scholars view this play as an unflinching look at the narrow choices available to women (marriage, the convent, or prostitution) during the Restoration, with the particular focus on the injustice of the libertine standards allowed men.

7. Is there any controversy surrounding the work?
In its time, The Rover’s humanizing depictions of women (especially prostitutes) and the sexual politics that governed their lives caused some controversy and uproar. Some used her depiction of Angellica Bianca, the famous courtesan, as evidence that Behn herself must be a prostitute.

8. What characters should I especially look for?
The women – Florinda, Hellena, Valeria, Lucetta, and Angellica Bianca. Their quick wits, merry humors, and self-determination put them in line with some of Shakespeare’s most popular ladies, Beatrice (Much Ado about Nothing) and Rosalind (Love’s Labour’s Lost).

9. What scene should I especially look for?
The aftermath of Willmore’s wooing of Angellica Bianca. In his attempt to live the life of a libertine, Willmore does not count on two strong-willed, strong-minded women making their needs, wants, and expectations known.

10. What is the language like?
Lively, spirited, fun, and modern – in the spirit of Carnival.