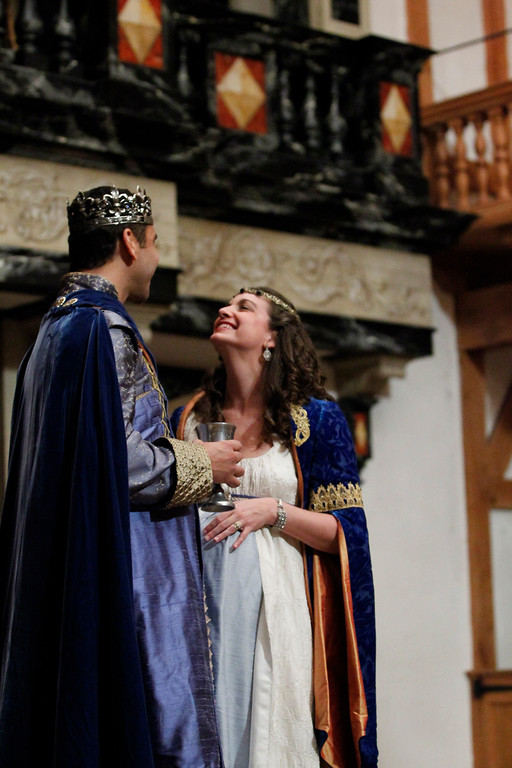 Eugene Douglas and Stephanie Holladay Earl in THE WINTER'S TALE. 2012 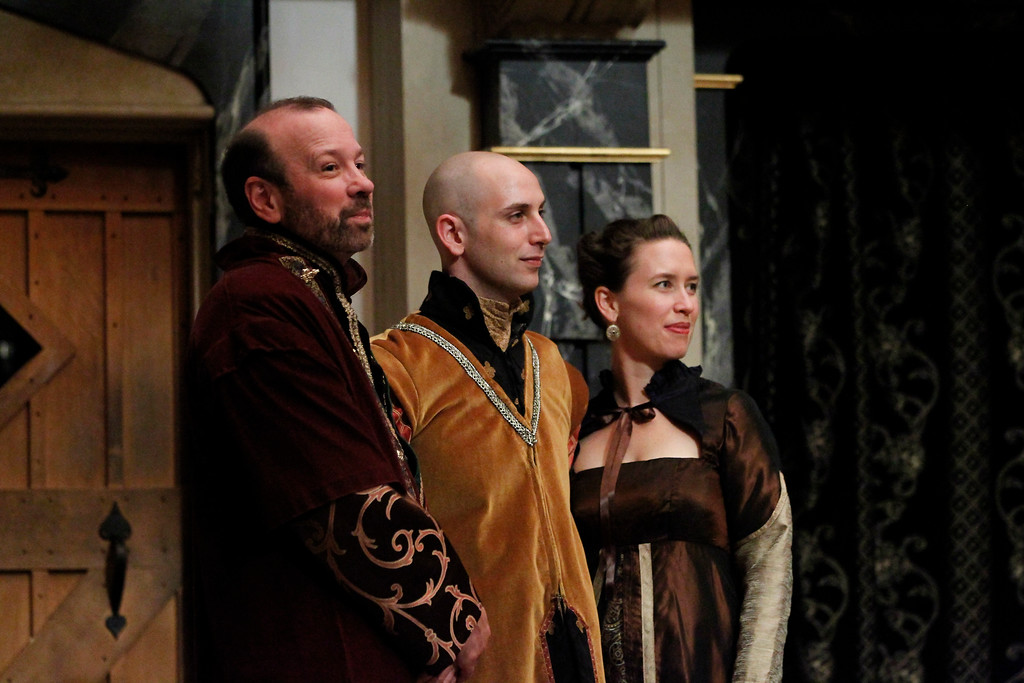 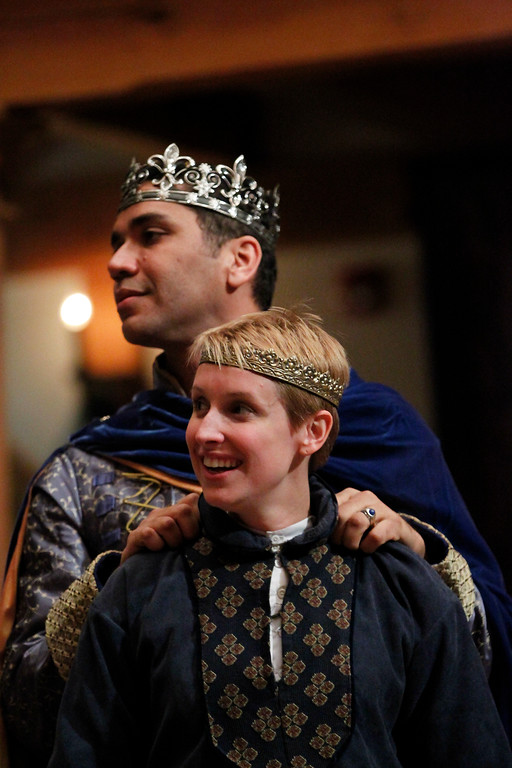 Eugene Douglas and Denice Mahler in THE WINTER'S TALE. 2012. 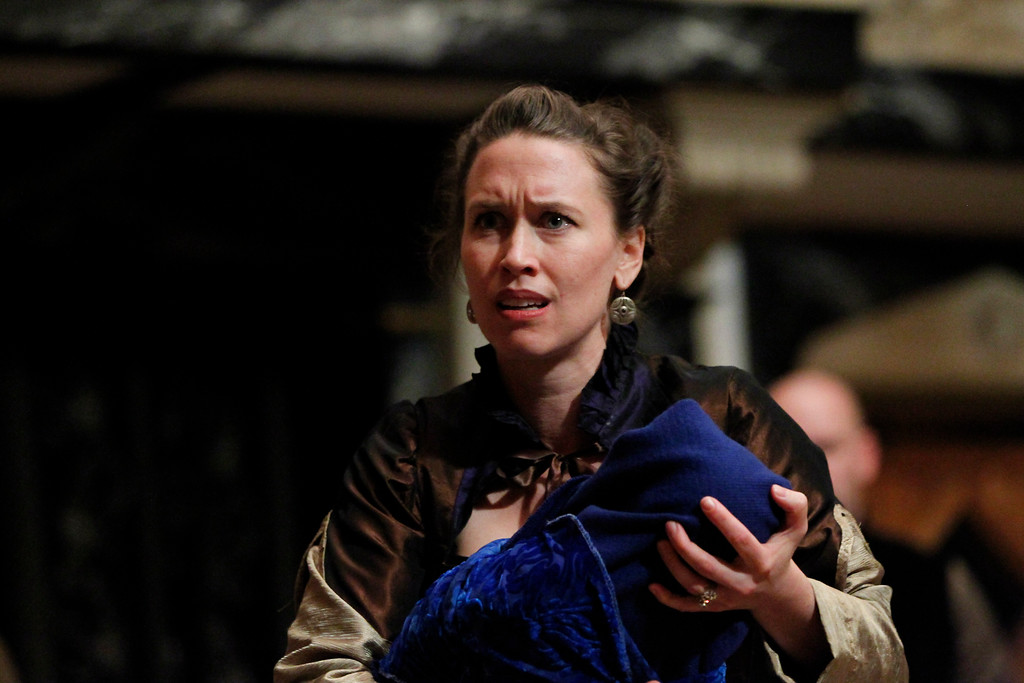 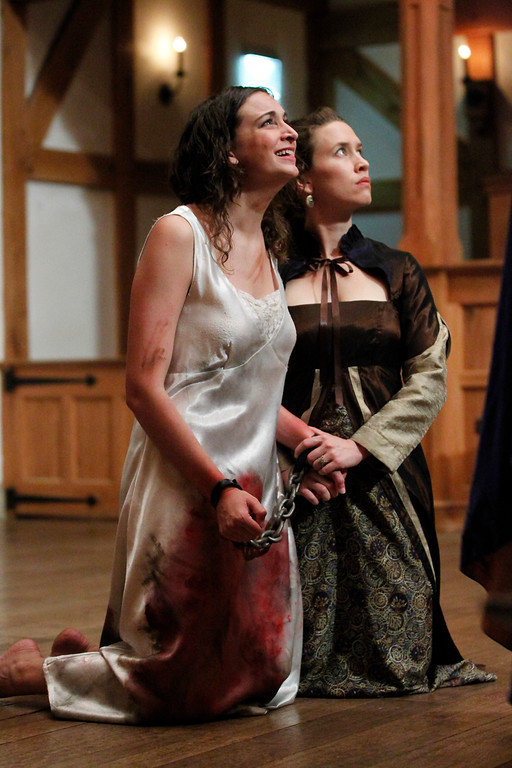 Stephanie Holladay Earl and Bridget Rue in THE WINTER'S TALE. 2012. 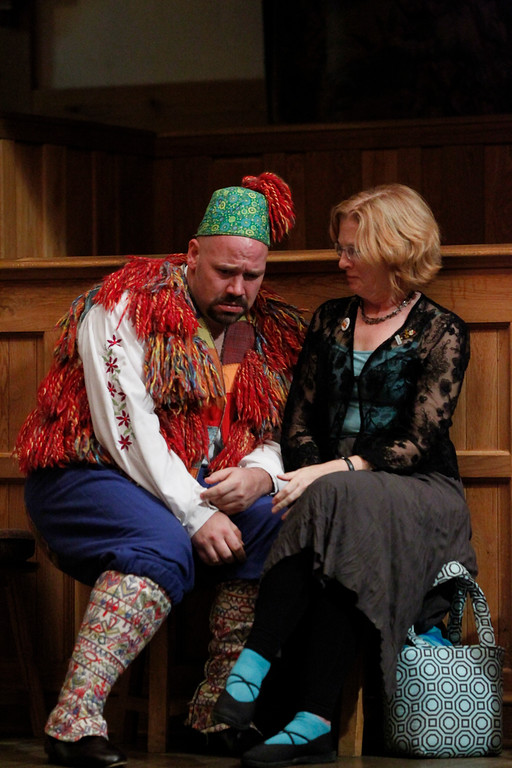 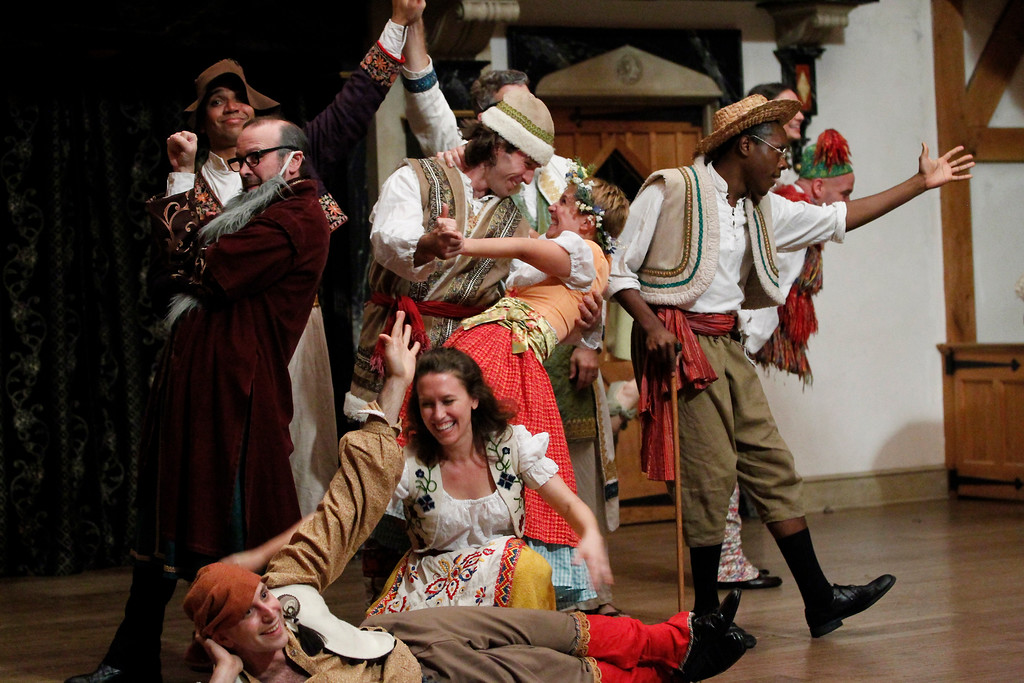 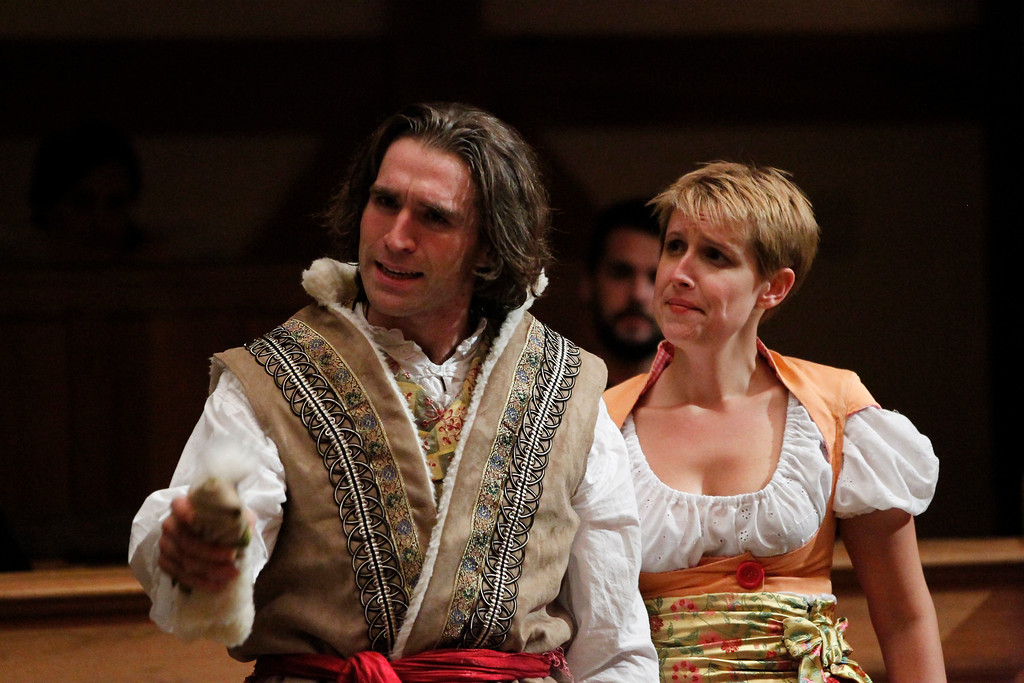 Daniel Abraham Stevens and Denice Mahler in THE WINTER'S TALE. 2012. 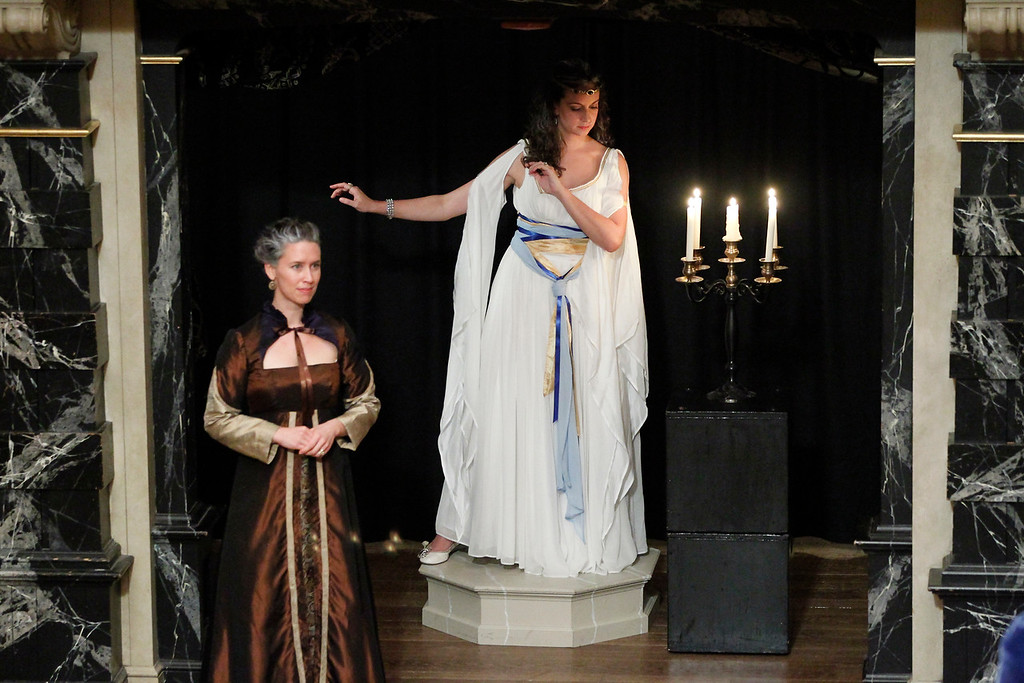 Bridget Rue and Stephanie Holladay Earl in THE WINTER'S TALE. 2012. 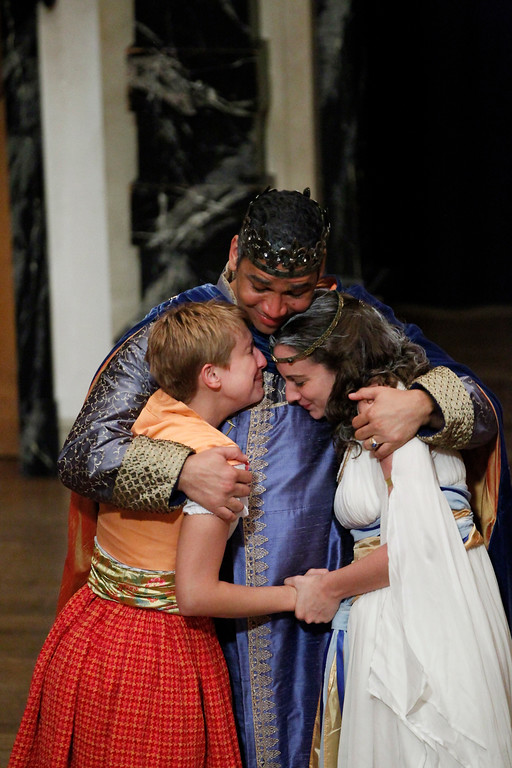 It is required you do awake your faith

(edited notes I sent the actors before we started rehearsals)

– The categories that subdivide On Demand and Netflix so you can easily look for the “kind of movie” you want are similar to the categories/headings in the 1623 First Folio edition of Shakespeare’s plays: “Comedies,” “Tragedies,” “Histories.” And just as movies like Pulp Fiction (a crime thriller filled with comedy) and Shakespeare in Love (a period drama full of romantic comedy) are not always listed where you think they should be, individual Shakespeare plays are also the product of mixing and matching from these categories. And I think this mixing of genre is part of what makes Shakespeare so great: the comedy in Much Ado is heightened by the hard-core dramatic center of the play; the first half of the tragedy of Romeo and Juliet is some of the funniest and dirtiest stuff Shakespeare ever wrote. (What’s wonderful about Netflix and the new wave of online video stores is that movies can be listed in multiple genres. Shakespeare in Love is simultaneously listed in: Romantic Comedies, Romantic Dramas, Period Pieces.)

– So, the WT note here is: play the moment. Don’t try to play the scene or what you think is the appropriate tone for a genre. Play each moment as it is written and let it be whatever it is; don’t label it. Let Genius Boy (Shakespeare) and me (his favorite director!) take you and the audience from moment to moment and let me worry about the cumulative effect. Don’t play an arc, play each moment so that those watching can decide what they think the arc is.
– Too many actors get caught in the trap of deciding what their overall character journeys are and then playing pieces of that overlay rather than digging in and finding/playing each individual moment night after night.
– What’s surprising, shocking, and delightful about the ride of WT is that tone, dynamic, and genre often slip and slide in ways that are hard to predict. We will treat our audiences to a feast that delivers the entrée, salad, dessert, and appetizer in unique but delicious ways.

– Shakespeare doesn’t care about the descent into jealousy in WT (he did that in OTHELLO), he wants to explore the effects of jealousy on a marriage with kids, the ultimate horror it can create, and then repentance, forgiveness, rebirth, and reconciliation.
– The audience has to care about these characters to take the best ride Shakes has given us. For the audience to care, the characters have to love truly madly, deeply.
– Polixenes can’t be on the prowl or skeevy in any way.
– The love from every side has to be deep and real.
– The accusation of infidelity has to feel so real/true for Leontes but also be very wrong for everyone else.
– Leontes has to believe he is right, right, right…right up until he realizes he has been so, so wrong.
– And the ending has to be happy. That’s a very difficult aspect to the fairy tale. At the end of the play, Mamillius is dead. Antigonus is dead. Neither of them come back to life. And yet the ending has to be a painfully happy family reunion.

– But a big part of this play is a fairy tale. Rebirths are possible in fairy tales. Leontes’s repentance, Hermione’s rebirth, a statue that comes to life to be reunited with her daughter all create the kind of heart-breaking, heart-restoring miracle that also makes perfect sense as the culmination of this fairy tale.
– The end of this play is a miracle.

I can’t wait to work on this great play with you wonderful actors!!!!