At the 2019 Blackfriars Conference, I delivered a presentation about what I’ve come to  call “audience activation” — what it is, why it matters, and how to do it effectively through the use of Shakespeare’s questions. I’ve adapted that presentation for this month’s Applied Theatrics column in order to share it with all of you. Enjoy!

I began attending shows at the American Shakespeare Center in 2012, and I immediately recognized that theatre in the Blackfriars Playhouse feels super different from theatre in every other room I’d ever been in, and became obsessed with figuring out WHY. I knew it had something to do with Shakespeare’s staging conditions – specifically universal lighting and the visible audience – and I also wanted desperately to prove ASC co-founder and Director of Mission Ralph Alan Cohen’s life work with science, so naturally I wrote my first Masters’ thesis on the neurological effects of direct, mutually sustained eye contact. I posited that theatre feels different in our space because of the way our brains respond to social cues, and after reading hundreds of MRI studies on the neurobiological effects of eye contact, I discovered I was right:, direct eye contact between actors and audience members switches on the social neural network, transforming the theatrical experience from passive observation to social interaction — a totally different neurobiological event.

Without question, eye contact heightens audience contact, but not all contact is created equal. Audience contact (or direct address, breaking the fourth wall, whatever you want to call it) really only requires what veteran ASC actor Ben Curns calls a “do to”: the actor “does something to” the audience by looking and/or speaking in our general (or specific) direction. The most moving and memorable moments tend to include what I call audience activation, which also requires what Curns calls the  “get-from”: the actor requests and requires the active participation of the audience.

An obvious, extreme, and omnipresent tactic for “getting something from” the audience is to ask the audience a question, which opens up the terrifying possibility of actually getting a verbal answer from the audience. Here I am saying: yes, the audience WILL answer. Especially if the actor socially cues them — activating them — to provide that response. Which IS OBJECTIVELY TERRIFYING. The audience is a terrible — and terribly unreliable — scene partner. So let’s take a look at an example of an actor activating the audience and dealing with the consequences in the ASC’s 2016 Summer/Fall production of King Lear, in which Edmund (played here by Patrick Earl) asks the audience some questions.

Edmund asks four questions: 1. Which one shall I take? 2. Both? 3. One? 4. Neither? Earl asked them quickly, allowing no room to get anything back between each one, but when he gets to the final one, he clearly invites a get-from the audience by turning his head slightly and putting a finger to his ear in the widely recognized social cue: “I’m listening.” Not as robust a social cue as eye contact, but still — he paused for a reply. Social neural networks likely were engaging all over the Playhouse as soon as Earl started asking, and even more robustly once eyes started swiveling towards the audience member who felt activated enough to answer. But I would wager that the critical activation took place for everyone in the audience in the moment after the laughter died down, Earl smiled, and then responded directly to what he got. If he hadn’t, I believe the audience would have lost its faith in the unique social contract of this room. A denied “get-from” belies all the “do tos” that came before it as false facsimiles of the thing itself, making Earl and his audience no more active than Ferris Bueller and the invisible masses on the other side of his camera, each  immune to the other’s input.

So here is my mandate to actors who want to use this tool: when you ask, you will receive; and when you receive, you have to take what you get. You do not, however, have to add text extempore — NOR SHOULD YOU. The most common audience response in our Playhouse is shocked silence and a mute refusal to believe–a silent question: “Could you possibly be talking to me?” But that is absolutely a response.

While Earl may have prepared for shocked silence, shouts of “neither!” (or perhaps the occasional “Goneril!”) he did not prepare for “kill them both and take their money” — because nobody prepares for “kill them both and take their money.” You just can’t prepare for everything. Instead, he simply confirmed the social contract of this room by shifting his phrasing to turn his next scripted line into a living response to what he got from the audience — and to get the play back on track. The audience did not take over, but they did WAKE UP — because in that moment, everybody in the room (including yours truly) was suddenly there together. All of us (especially the audience member who answered) will remember that moment forever.

AND IT CAME FROM THE TEXT. For the alert actor, Shakespeare’s text somehow keeps a firm hand on the reigns of audience activation. Because if “kill them both and take their money” can work as an answer to this supposedly multiple-choice question without sending the play off the rails, anything can. After all, neither can be enjoyed if both remain alive.

Finally, even though it’s asking for trouble to try a live experiment in audience activation after priming an audience to be so robustly activated, I’m going to try it here anyway. I’m going to use the most extreme example I could think of — Shylock’s “hath not a Jew eyes?” speech from The Merchant of Venice — because I want to demonstrate just how far one could push this “audience activation” effect using the unique tools of this room (a visible audience, an alert actor, and a whole bunch of Shakespeare’s most difficult questions).

Shylock is not alone onstage, and he could absolutely be asking any or all of the ten questions (conservative count) in this passage to his scene partners rather than the audience. But the latter is always an option in the Blackfriars Playhouse, so  we’re going to give it a try. Besides, this speech is so famous that now, it’s commonly delivered to the audience anyway in the Ferris Bueller style — a rhetorical set piece Shylock has perhaps been rehearsing in his bathroom mirror for the last six weeks, rather than an on-the-spot series of questions occuring to him in the moment that he actually wants answered, either by the people onstage (who don’t have lines and will not answer) and/or us in the audience (who could very well kill them both and take their money – WHO KNOWS!).

NB: the audience does not have a script! Nobody was expected to give a certain answer or to give a verbal answer to any of Shylock’s questions — but everybody did give answers. They were written on all of our faces for the actor playing Shylock (Miriam Donald Burrows) to see and use.

Here’s what I told Miriam to do:

Here’s what I told the audience to do (which is also what I ask of my ASC Theatre Campers):

To set the scene: Shylock, interrupted and insulted throughout the entire play, is justifying to his detractors why, exactly, he is so passionately pursuing the pound of flesh promised to him by Antonio. I gave Miriam the cue line, and you can see for yourself what happened next:

I think the clip speaks for itself, so I’ll just leave you with a thought and a final question. The thought: productive civil discourse requires genuinely asking questions and then responding directly to the answers actually given. The question: If we can use that tactic to create this sort of magic in the Shakespearean theatre, what sort of magic could we use it to create in the political theatre of the 2020 Presidential Election? 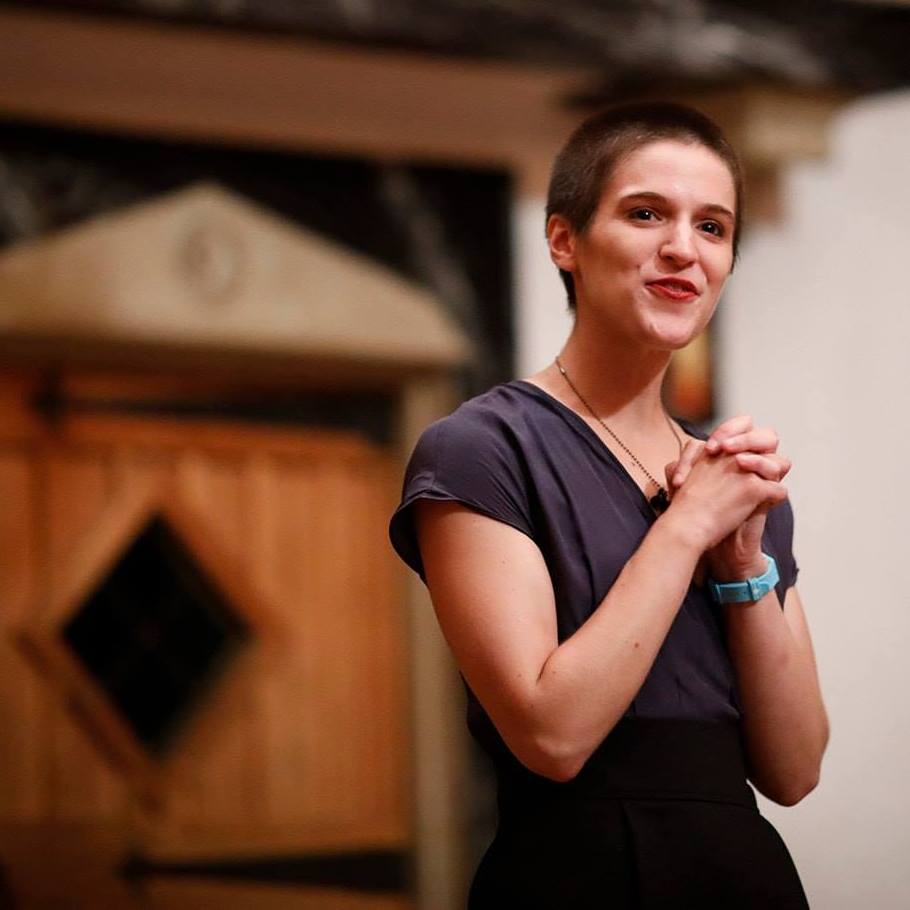 Lia Wallace is the ASC College Prep Programs Manager. She also is the Camp Director for our American Shakespeare Center Theatre Camp.