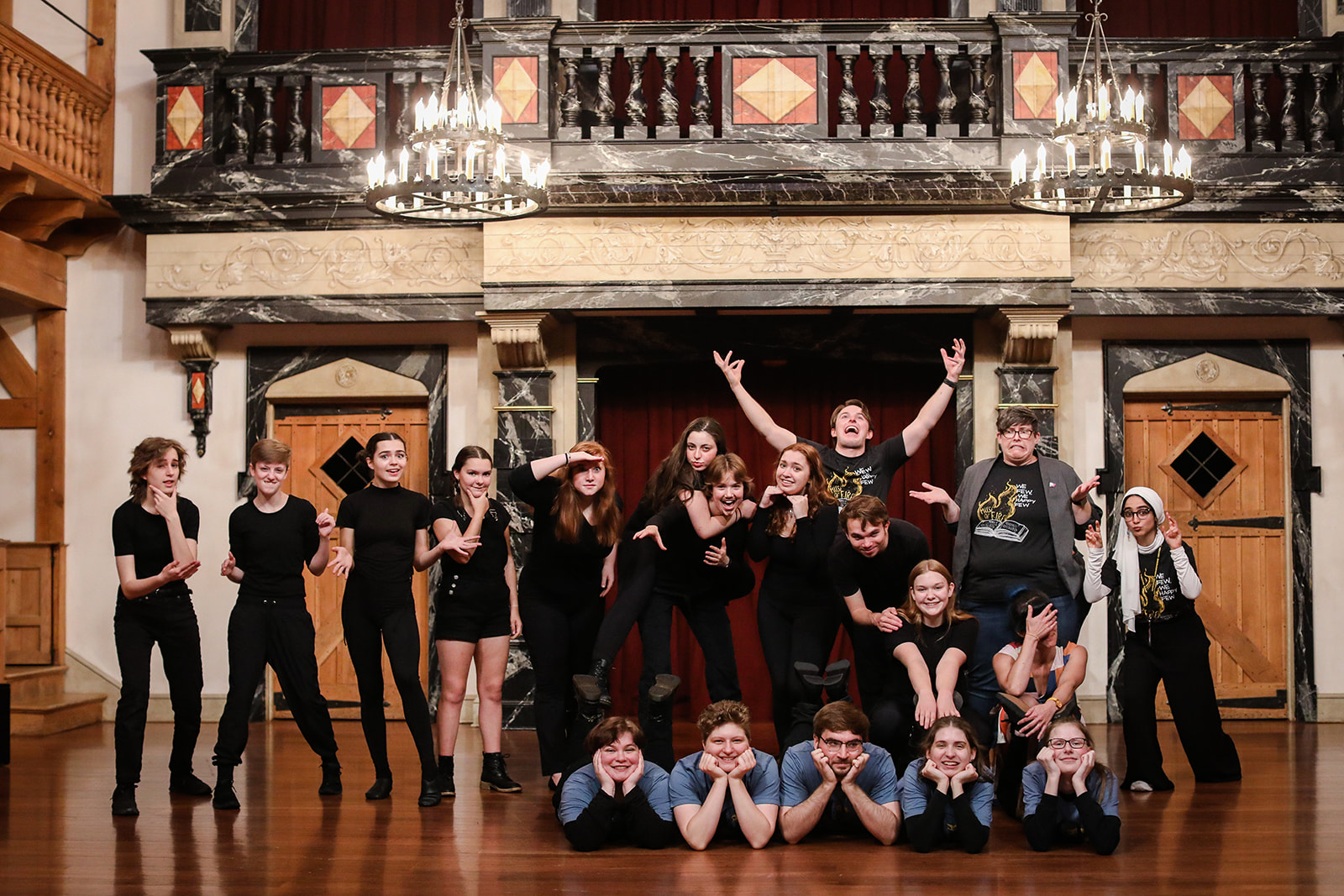 Has this year been as bonkers for you as it has for me? Hi, I’m Lia Wallace! You may remember me from such blog posts as “Bringing the Magic Online: A #SHXCamp 2020 retrospective” and “What Are Your Hands Doing?” I am the Performance Studies Manager for the American Shakespeare Center’s Programming Department, and I have been running the ASC Theatre Camp in some form or another for the past six summers. It’s a ridiculous and rewarding job, no matter what form Camp takes, but I won’t pretend 2021 was the same as other summers. It wasn’t. We did something very, very different this year — and we changed the game completely.

Here are some of the major triumphs, takeaways, and lessons learned from this summer’s wild and crazy Shakesperiment.

1. Do whatever is necessary to have Camp in person.

After #SHXCamp 2020 took the magic of camp online last summer, I knew two things: we can do it, but we shouldn’t assume it’s doable again. Theatre is not film, and we make the former, not the latter. If we want to pivot to film, or even filmed theatre, we’d need to make a lot of investments in both the tech needed to create those things and the personnel qualified to use it. Otherwise, we’d need to return to what we do best: making magic by putting people in a room (specifically the Blackfriars Playhouse) together. Hosting an in-person residential program during a worldwide pandemic is tricky, but vaccines and careful planning made it possible for us to bubble the campers and staff together at Hotel 24 South and keep everybody safe through four weeks of Camp.

“This camp was the most positive and supportive thing [my camper] has ever been involved in. Of course it was so much more than performing Shakespeare. It allowed [my camper] to be away from home for a longer time than she’s ever been yet feel comfortable with everyone there, gain confidence and have the best time of her life with the other campers and staff.” – 2021 Parent

2. Do shows need Directors? Maybe not!

One question that gnawed at me throughout the planning process was what on earth to do about incorporating a Show Director into the Camp bubble. Traditionally, Directors are a few steps removed from the Camp Life experience to maintain a professional distance — they certainly don’t live with the campers, and the power dynamics of bringing a Director into a residential bubble gave me more than a little pause. So, we decided not to. In true ASC style, we removed the Director from the equation and challenged the campers to mount their show in the “Renaissance” (or “Ren”) style used by our professional troupe — that is, collaboratively, and without a Director. Was it a perfect process? Absolutely not, this is theatre, how dare you imply that such a thing is possible. Did it work? You be the judge: watch their production for yourself and see what you think:

“Ren shows are ****ing hard. It was very difficult to make snap decisions and just start to make choices without direction. But having the support of the company was how I was able to do it. Everything I ever struggled with was helped by someone else.” – 2021 Camper

3. Giving campers agency over their text empowers them to take ownership of their story.

Doing a show “Ren” style is challenging for even the most seasoned members of our professional troupe. In order to set the teenage campers (some of whom had never been in a play before) up for success, we needed to provide a framework for the group to come together and start on something approximating the same page. So we spent our first week together focusing on ensemble training and script preparation: campers got training in Viewpoints, stage combat, clowning, improv, and dance while also working together with staff to cut their own performance script of Shakespeare’s Henry V.

This is no mean feat. We have two very  different surviving versions of Henry V (a Quarto and a Folio), and campers had to read both together as a group, vote on which “base text” to whittle down to a 90-minute runtime of about 1600 lines, and then cut the thing together (the ~1900 line Quarto makes this much easier than the ~3400 line Folio, but of course the campers chose to start with the Folio). Staff waited to hold auditions until after this week of ensemble training and script-cutting, so the campers had to decide together what story they wanted their play to tell before knowing how, exactly, they might each contribute individually to that story-telling.

By the time they received their individual parts, they’d decided as a group which themes to highlight (identity, manipulation, coming-of-age) and which they wanted to downplay (xenophobia, misogyny, nationalism). They’d decided which moments were most important to them (the opening chorus, the clowns on the battlefield, the death of the Boy) and which moments they could do without (the hundreds and hundreds of lines they ended up cutting). When they ran into disagreements in the rehearsal process, rather than fighting over which choice was “right” or “better” (or “what the Director/Shakespeare/Lia wants”) they could return to this same page and ask themselves which choice better served the story they’d already decided, together, to tell.

“Everything about script cutting was fantastic. It made us care about the play, it made us a stronger company, it made sure we KNEW the play before we auditioned. All of everything about it was good.” – 2021 Camper

4. Giving campers agency over their production requires them to mount a production they can manage.

In the “Renaissance” spirit of self-direction, we divided the Camp Company into five production committees. Each committee had its own area of responsibility (props, costumes, music, media, and choreography) with 2-4 campers in charge of dividing and conquering that work, and an ASC company mentor that met with them regularly to give feedback on their ideas. The purpose of the committees was to give campers the opportunity to learn more about what goes into putting up a show up besides the performing. How do we decide costumes? How do we build a safe and effective swordfight? How do we get the word out to potential audiences? Campers got up close and personal with these decisions, which means they learned how to make them rather than just receive their instructions. It also meant they learned (quickly) to make decisions they would actually be able to execute, because if they failed, it would be their failure — not their director’s. Consequently, they made manageable plans they could execute clearly and effectively, and then executed the heck out of them. Finally, to add some icing to this cake, committees gave campers yet another opportunity to interact with ASC professionals: the costumes committee got to work with Costume Shop Manager Mary Evelyn Gunn, the props committee got to work with Technical Director Rhi Sanders, the music committee got to work with Actor-Manager of music Chris Johnston, the media committee got to work with Social Media Fellow Amber James, and the choreography committee got to work with both fight director Jeremy West and intimacy choreographer Natasia Reinhardt.

“The committees were a very good idea, even if they were stressful at times. Being able to have the input into our play’s environment was just fantastic.” – 2021 Camper

5. Nothing beats being in the Blackfriars Playhouse.

Obviously, we wanted to return to in-person Camp this year (see item #1 on this list), but more than that, we wanted to return to the Blackfriars Playhouse. This summer, campers got more time to work, play, and rehearse in the Playhouse proper than ever before. Ensemble training with camp staff, performance coaching sessions with Brandon Carter, committee meetings with ASC company mentors — all of it took place in the Playhouse itself (along with many actual rehearsals). Having hours and hours of uninterrupted Playhouse time empowered campers to really get to know the space, and use it to its full potential. In a lot of ways, the Playhouse is its own member of the company; it has its own restrictions and preferences, and having so much time to work with it gave the Camp Company the opportunity to build a show that really, well, worked with it. They used the whole space, popping up from the trapdoor to Hell to create the “mines” during the siege of Harfleur and running through the house balconies to create the chaotic battle of Agincourt. They made those decisions themselves, looking at the text and asking what each moment needed, rather than waiting to have those decisions handed down to them by anybody else (let alone a director). Best of all, the choices they made were wildly different from those made by the professionals of ASC’s acting troupe (also performing Henry V this fateful summer), and campers had enough awareness to know that their choices were every bit as justified in the text.

“The Ren process shocked me with how successful it was as an experiment, and I think you’d be doing a disservice to its success to not SOMEHOW incorporate the Ren process forward into the future of camp. – 2021 Camper

This summer stretched Camp in new ways. The task at hand was daunting, but campers (as they always do) rose admirably to the challenge and cleared the higher-set bar with apparent ease. Maybe it’s because the triumph of being together dwarfed the daunting nature of the task at hand. Maybe it’s because Camp is magic. Maybe it’s just Maybelline, or some other fluke — but I doubt it. Honestly, before Camp started, I was not sure this ridiculous Shakesperiment was going to work. But it did, and the question now is not whether but how we will carry this “Campers’ Renaissance Session” forward into 2022 and beyond. Because you better believe we will.

“Top three camp takeaways: Acting is uncomfortable but that’s ok, cutting your own script is one of the best ways to familiarize yourself with the script, Ren shows are hard but even more rewarding in the end.” – 2021 Camper 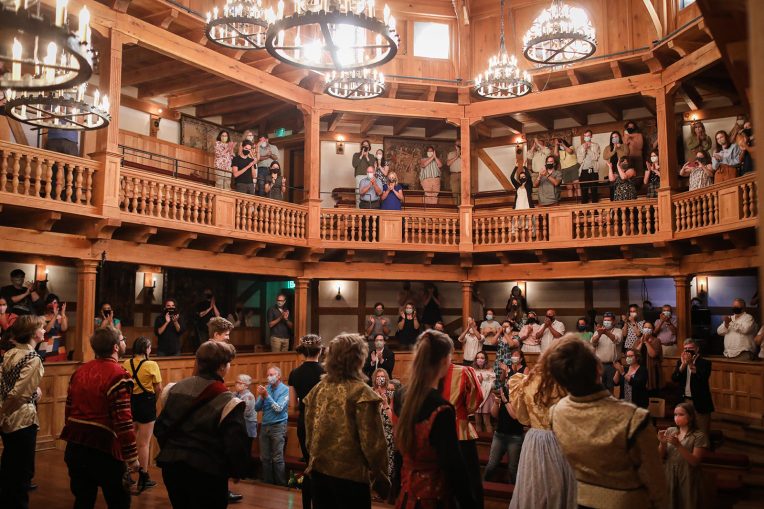