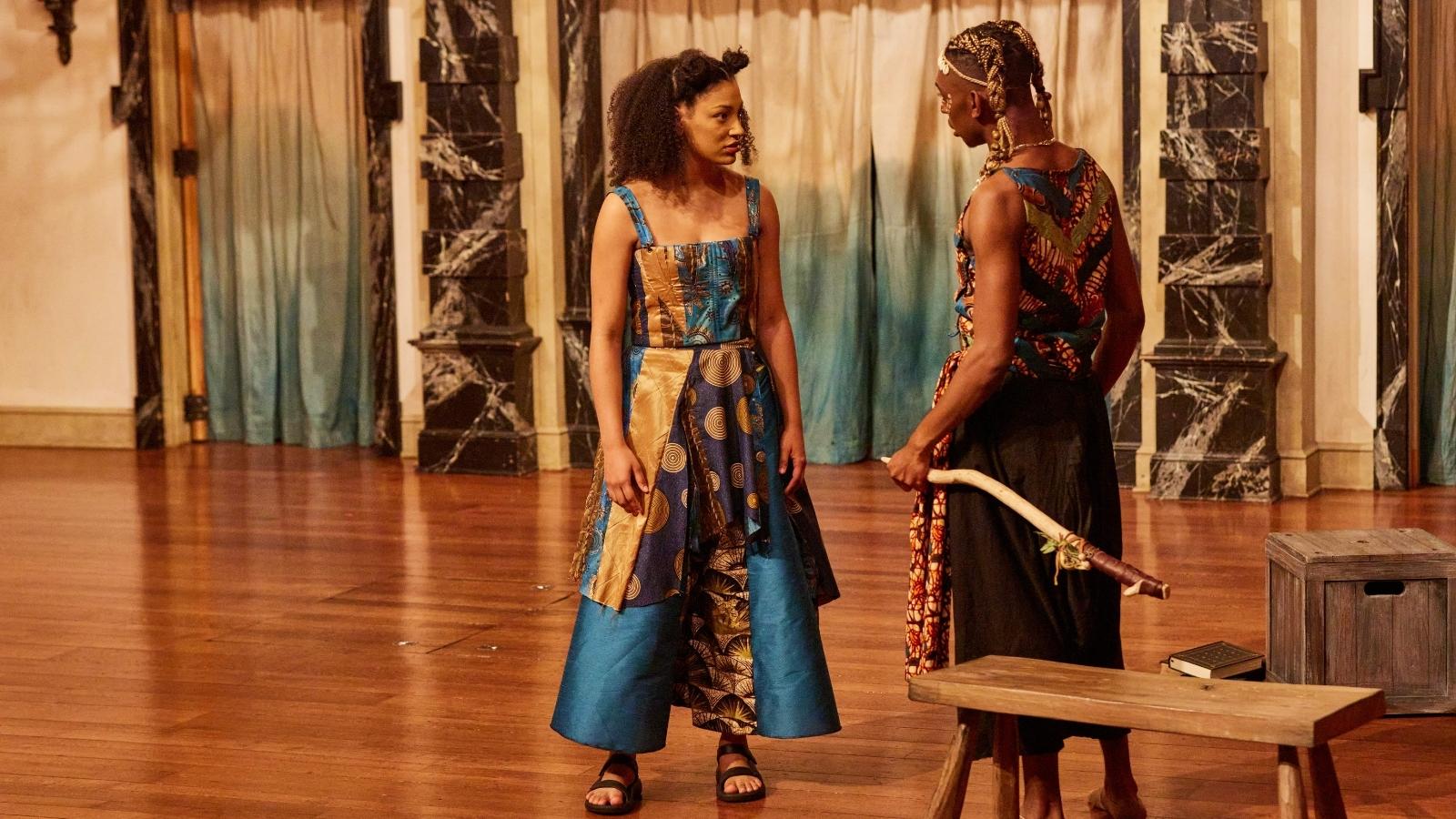 The Fall Season at ASC is in full swing and we are thrilled to bring audiences a rotating repertory of three iconic plays that each serve an important place in the theatrical canon. Perhaps the most exciting part of this season is that we are presenting two companion plays–Shakespeare’s The Tempest and Aimé Césaire’s Une Tempête. Une Tempête approaches the same characters and storyline from a post-colonial perspective, where the stories of Caliban and Ariel are centered as the original inhabitants of the island who are enslaved by Prospero upon his arrival.

While you may have read or seen The Tempest before, it’s much less likely that you’ve ever seen a fully staged version of Une Tempête and we are thrilled to present you with the chance to engage with this adaptation that has had a profound impact on political, literary, and scholarly discourse since its publication in 1969. The perfect balance of something familiar and something new, we know you won’t regret snagging a ticket to one of the five remaining performances of Une Tempête between now and November 19. But first, read on to learn more about the background of this play and our production in particular.

Pretty much everyone who has seen a show at the American Shakespeare Center knows who William Shakespeare is, but perhaps Aimé Césaire and his work are somewhat less familiar to you–but not for long! 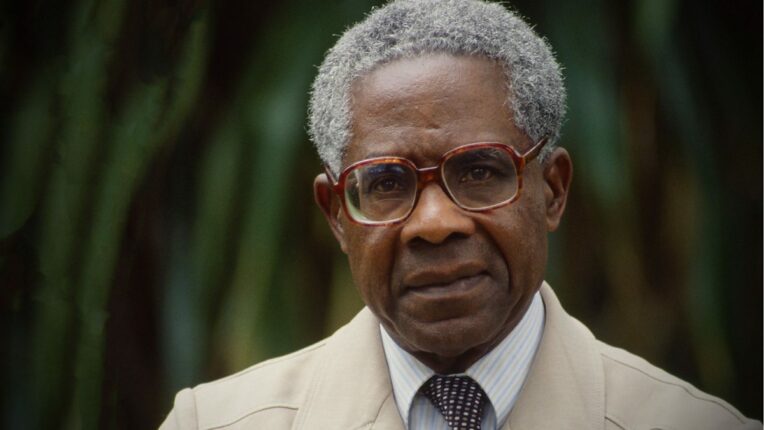 Anti-colonialist visionary and creator of the concept of “negritude,” Césaire is perhaps most well-known as a politician and one of the most influential authors and poets from the French-speaking Caribbean. He was born on June 26, 1913 in Basse-Pointe, Martinique (important to remember because the island in Une Tempête is set in the Caribbean). His parents prioritized his education throughout his childhood which eventually took him to Paris. There he co-founded a journal called L’Etudiant Noir (The Black Student), which brought together students from Africa and the West Indies through voicing a Pan-African worldview under colonization. During these earlier years of his career, he wrote his first and most impactful poem, a book-length piece entitled “Cahier d’un retour au pays natal” (“Notebook of a Return to the Native Land”), that remains an undisputed masterpiece and poetic milestone to this day. He met and married Suzanne Roussy while in France and together they returned to Martinique where Césaire continued growing in literary prominency. He was elected mayor of Fort-de-France in 1945 and later went on to found his own political party, Partie Progressiste Martiniquais (PPM), and serve as a deputy in France’s National Assembly, before retiring from politics in 1993. He published his last piece of writing, a book of poetry called La Poesie, in 1994. He died on April 17, 2008.

Césaire published Une Tempête (A Tempest) in 1969 during the height of his political career. His writings during this period, like his 1950 essay Discours sur le colonialisme (Discourse on Colonialism), all seemed to reflect his passion for civic and social engagement–Une Tempête is no different.

While Aimé Césaire’s play has been widely discussed, translated, and analyzed by scholars, it is much less common to see this play being staged. ASC is hoping to change that pattern with our production this fall!

Researching the full production history of Une Tempête is tricky, but there are some notable productions of this play that are worth knowing about, especially in demonstrating its international impact. Une Tempête was first performed in 1969 its original French at the Festival d’Hammamet in Tunisia under the direction of Jean-Marie Serreau. It subsequently played in Avignon and Paris. Theâtre Vollard, a theatre company on the island of Réunion near Madagascar, produced the play in 1980. The Gate Theatre in London produced a new English translation of the play in 1998, with Andrew Dennis as Caliban and Michael Wildman as Ariel. In more recent years the play has also seen productions at a few different universities around the world. In 2014, the Department of Theatre Arts at the University of Hyderabad in India staged the play (which you can find a full recording of on YouTube!) and in 2016, Northern Arizona University in Flagstaff, AZ produced it as part of their College of Arts and Letters Shakespeare Festival. And earlier this year, in February 2022, NYC’s Red Bull Theater produced and recorded a reading of the play directed by Lanise Antoine Shelley with Isaiah Johnson as Caliban and Kimberly Exum as Ariel.

Although its production history is inconsistent, Césaire’s Une Tempête has remained relevant since its publication in 1969 and we are thrilled to be bringing it to audiences this fall.

While The Tempest and Pericles were both produced in our Actors’ Renaissance style where the actors design and stage the show without a director, we were thrilled to have an incredible director join us for Une Tempête, Dawn Monique Williams–who is also making ASC history as the first ever Black woman to direct for the American Shakespeare Center. 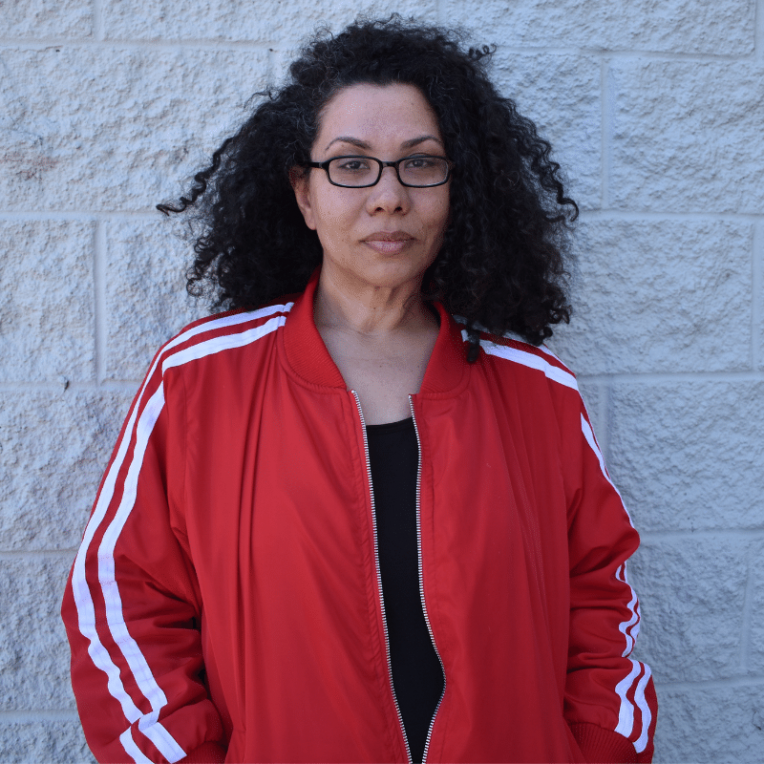 We were thrilled to have Dawn with ASC for the first time this fall to bring us this special production that converses perfectly with our Ren-produced The Tempest in design, staging, and thematic focus. You’ll need to watch both productions to see for yourself what we mean!

This “Tempest” rep is all about shifting perspective, and what better way to do that than with some intentional rep casting? A unique opportunity that comes from producing Une Tempête in the same season as The Tempest is that audiences can see actors play the same role in both versions. And that’s exactly what we’ve done with almost all the casting, with one key character as the exception. While you don’t want to miss Sarah Fallon’s stunning performance as Prospero in The Tempest, you’ll see James Keegan step into the role for Une Tempête. These two ASC veterans swap characters for these productions, with Sarah as Prospero’s double-crossing brother Antonio in Une Tempête. Here is what they each had to say about this experience:

“I am having fun playing in the noble’s world in Une Tempête. It’s always interesting to examine the play from another perspective and track. Also, the last time I was in The Tempest before playing Prospero, I played Antonio (many years ago). It’s fascinating to see how distilled and different Antonio is in Cesaire’s piece, as opposed to Shakespeare’s.” – Sarah Fallon (Antonio/Prospero)

“This season I am doing my fourth production of Shakespeare’s The Tempest. In previous productions, I have played Gonzalo, Stephano, and Prospero. As a result, it has been great fun to get a chance to play Antonio, Prospero’s usurping brother, and one of the main targets of–initially–the great magician’s vengeance and–finally–of his forgiveness…In our production, Antonio is transformed by both his suffering and by Prospero’s remarkable (because unearned) offer of forgiveness. Shakespeare wrote no lines or stage directions for Antonio in this moment, so this fraternal reconciliation was something that Sarah Fallon, playing Prospero, and I came to organically…The Prospero of Aime Césaire’s Une Tempête is an exaggerated version of Shakespeare’s mage, designed first and foremost, to accentuate a post-colonial reading of the play—so this later Prospero is clearly racist, embattled, despotic. I read him (and try to play him) as a self-obsessed academic, addicted to the power he has held for so long and convinced, by his scholarly acumen and successes (his ‘magic,’ which he presents more as science in this play), that he can and should be the one to wield power and govern others. In this respect, I have found that Césaire’s Prospero feels more like a mash-up of Shakespeare’s Prospero and his tragic King Lear. Lear’s problem is that he has held power for far too long, and, even when he tries to relinquish it, he ends up still clinging to it. But Lear in his tragedy suffers a stripping away of his protections and his arrogance, and even, for a time, his mental stability…He comes to recognize that he is merely another mortal man and subject to all the same failings and privations of other human beings. Shakespeare’s Prospero comes to realize that he must relinquish power and return to the world and that he must forgive all those against whom he wanted to exact his revenge…Césaire’s Prospero achieves neither the realization of Shakespeare’s Prospero nor the self-assessing breakthrough of King Lear. He is momentarily destabilized in the scene in which the trickster god Eshu disrupts and upends his ‘entertainment,’ which is designed to reinforce the future-defining spectacle of the Euro-centric colonizing power. However, in this response to Shakespeare’s romance, Césaire’s Prospero remains, as the Caliban of this play rightly predicts, inextricably and pathetically enslaved—like an addict—to his own impulse to oppress and dominate.” – James Keegan (Prospero/Antonio)

Whether swapping roles or playing the same character across both productions, it has proven to be a unique acting experience for our entire troupe. Here’s what some of our actors had to say about playing the same role in both plays:

“One of the biggest differences in Caliban in the two shows is that in Shakespeare’s The Tempest, Caliban doesn’t have magic and therefore is hesitant and has to navigate his journey to conquering Prospero differently, whereas in Une Tempête, Caliban does have magic which gives him more of a sense of strength and resilience. However, in both productions you will see a long-spined, upright-walking, clear-spoken, and intelligent Caliban that I have carefully curated by going against the natural order of the text and how it’s been performed time and time again throughout the centuries. The choices I have made are both against the text, and yet, absolutely supported by it. In both productions my Caliban is not a monster, is not stupid, and does not drink the alcohol that is offered to him by Trinculo and Stephano, which really carries a different narrative of people in power perceiving someone as lesser-than and bestowing upon society an image of said person that is completely false. I have never seen these choices being made for Caliban before and I think everyone should come see both performances and glean something exciting, powerful, and new from both a play we have seen many times before and a play that we may have never looked upon.” – Tevin Davis (Caliban)

“By seeing Une Tempête, you’ll be able to see Miranda begin to reckon with the legacy of Prospero’s control of the island, and come to terms with her own culpability in the power structures that he has built. Une Tempête also complicates the straightforward love story in The Tempest. Ferdinand and Miranda both have to face uncomfortable truths that they can avoid in The Tempest.” – Sarah Suzuki (Miranda)

You definitely don’t want to miss the chance to see these talented actors further explore these well-known Shakespeare characters in a companion play that tilts the original story on its head. As Davis says, “The interesting thing about The Tempest and Une Tempête is that they are virtually the same show with a different lens focusing on the colonization and oppression in which Caliban and Ariel find themselves encumbered by. A lot of the language in both plays–even though one is more classical and the other has more modern vernacular–is very close to the exact thing that is said in its companion play. This really allows us to ask many questions about Shakespeare’s The Tempest and brings a centuries old text closer to modern ear and perception.”

Like this post? Be sure to tag us on social media! Come see Une Tempête, now playing in rep with The Tempest and Pericles at the Blackfriars Playhouse through November 20. Get tickets today!