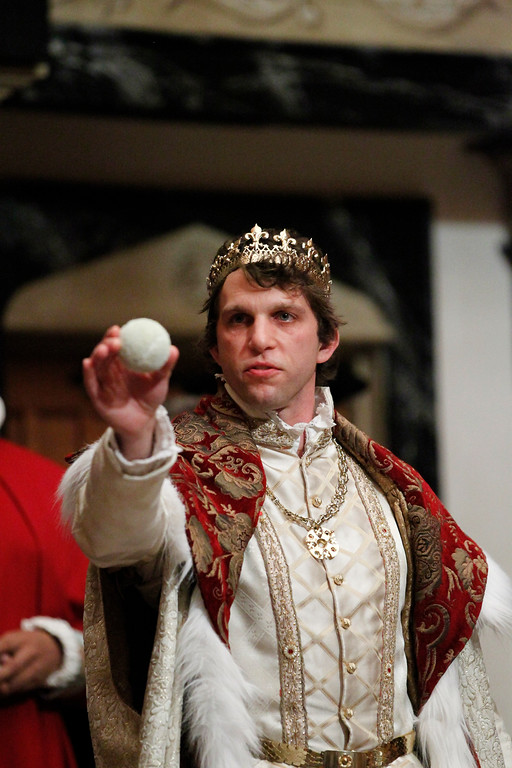 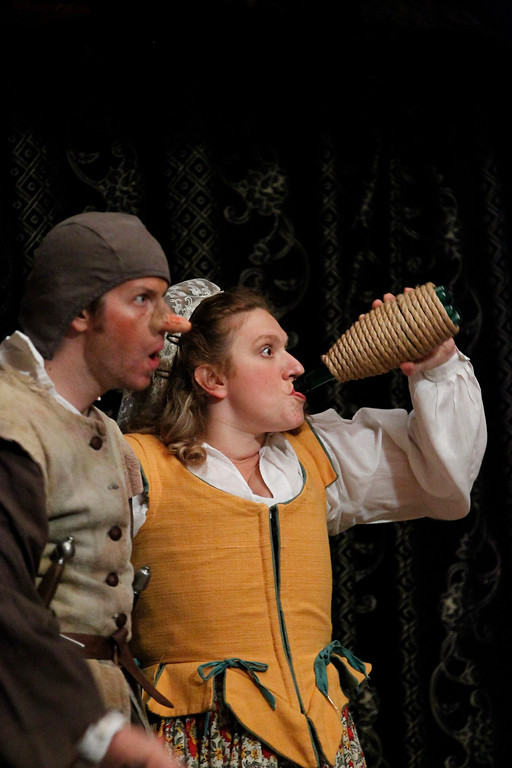 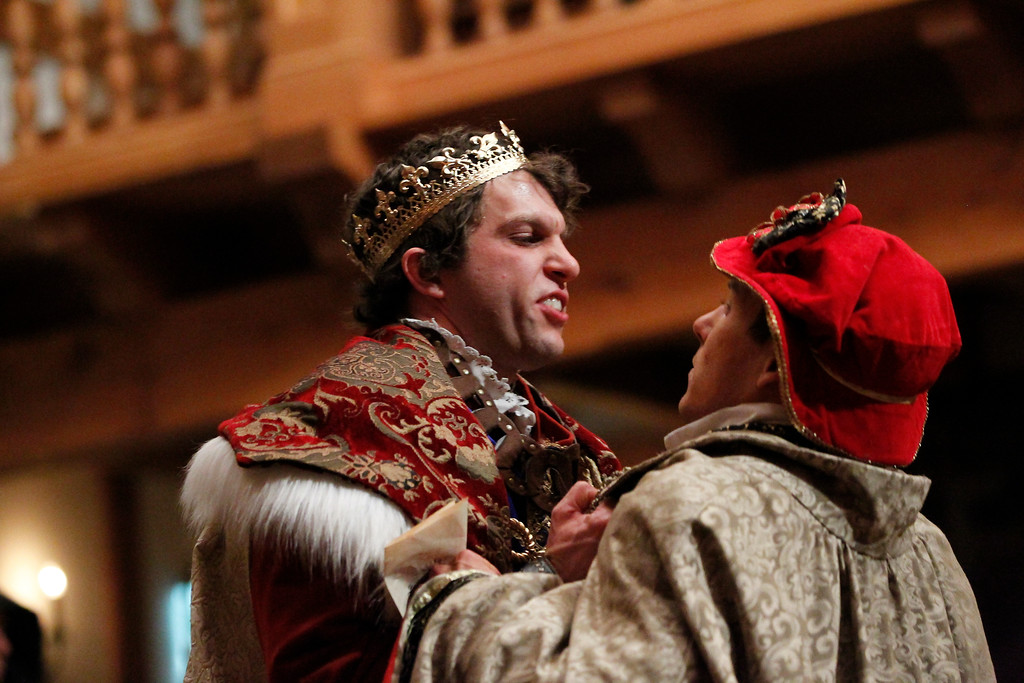 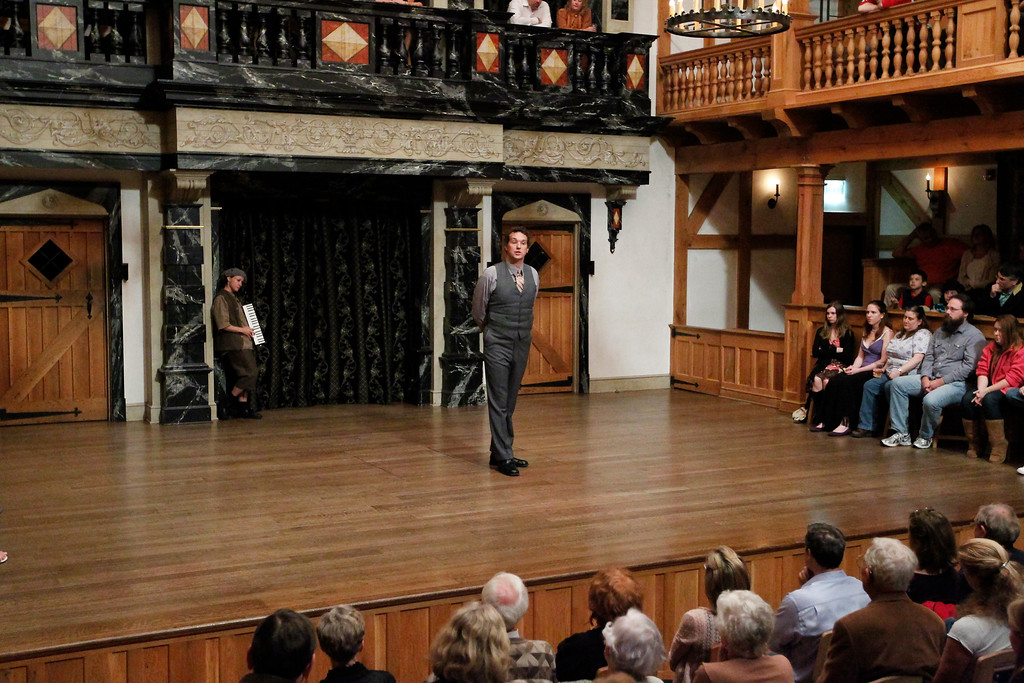 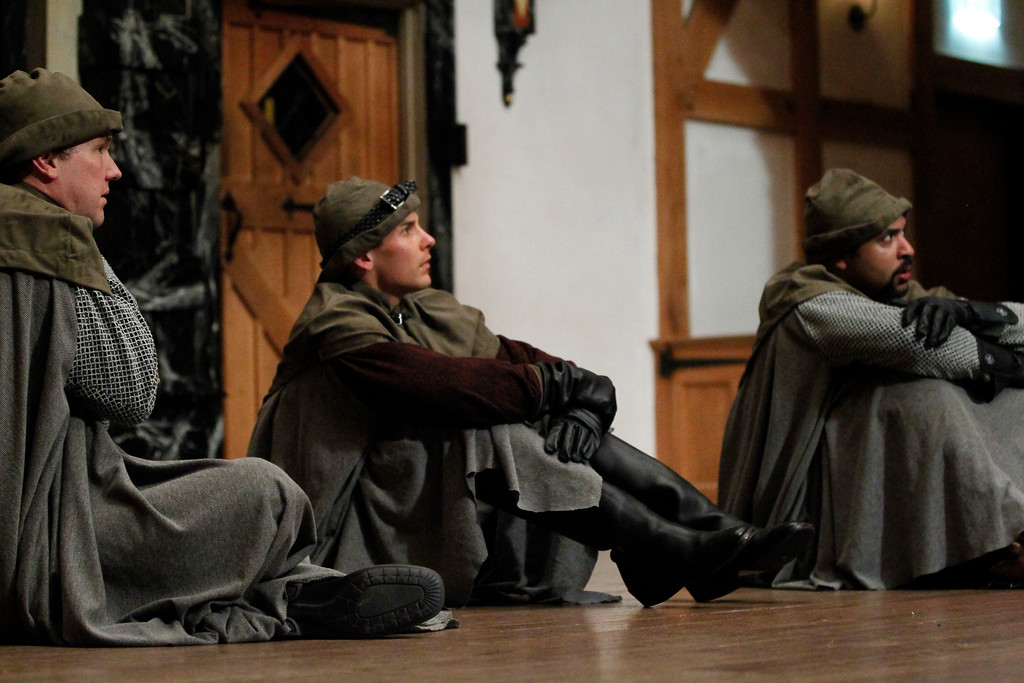 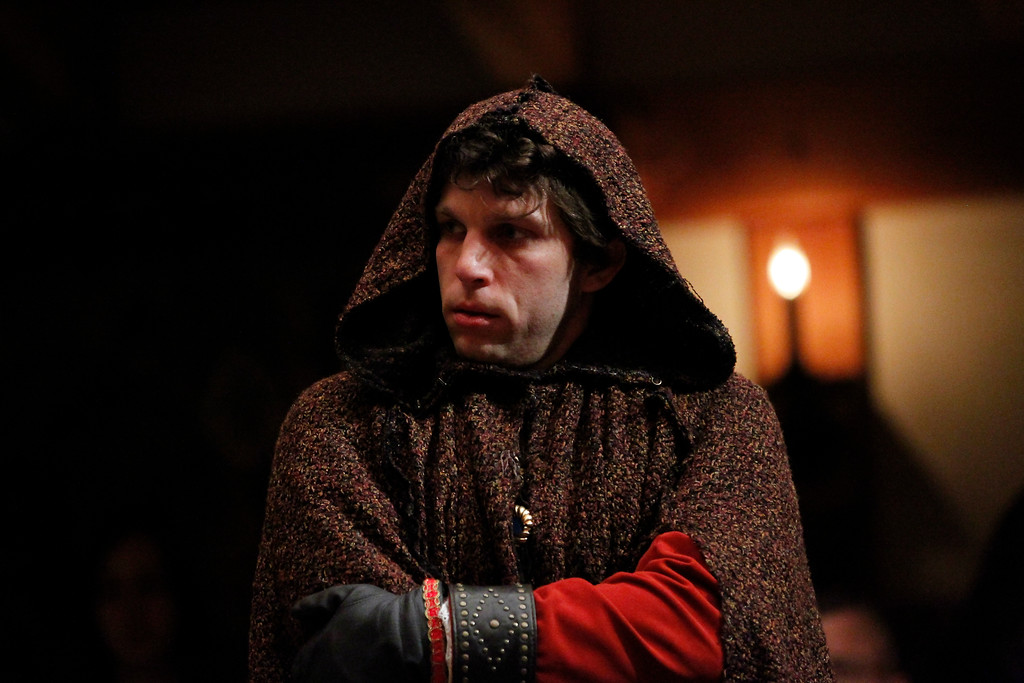 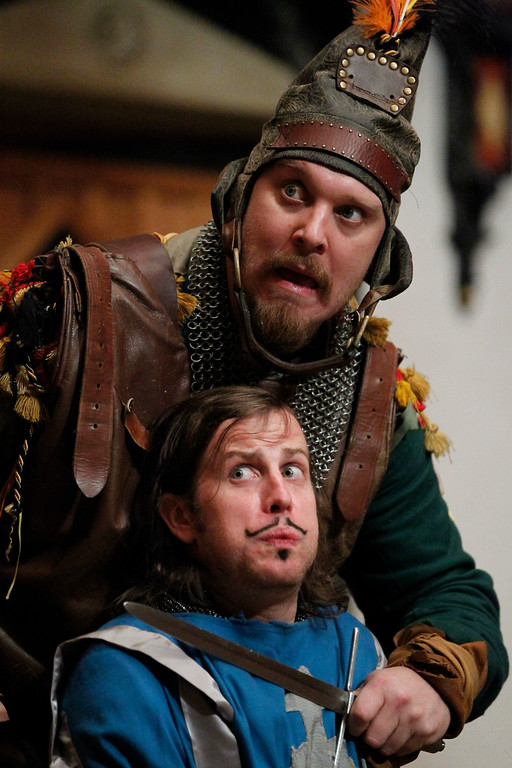 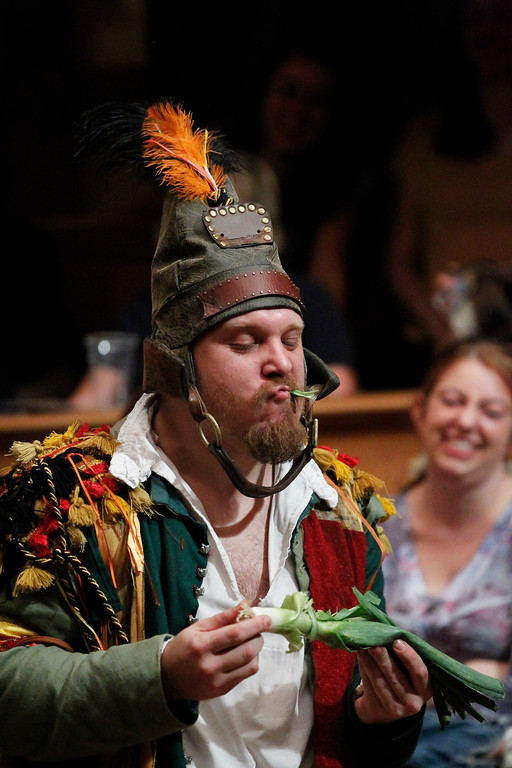 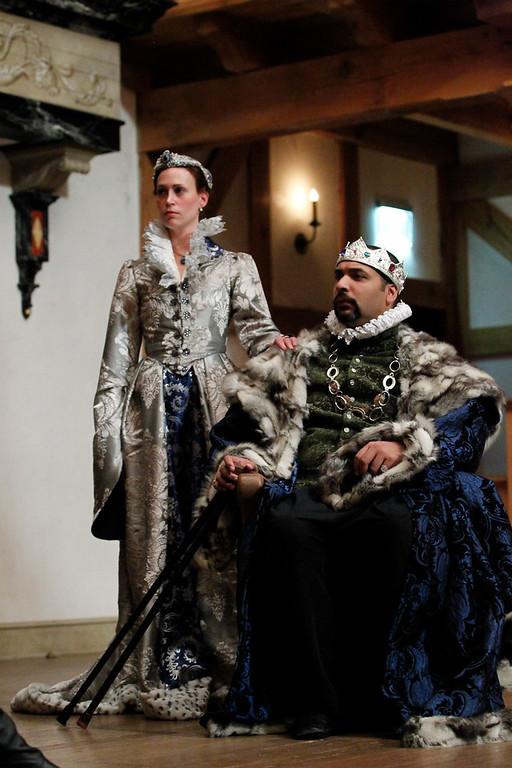 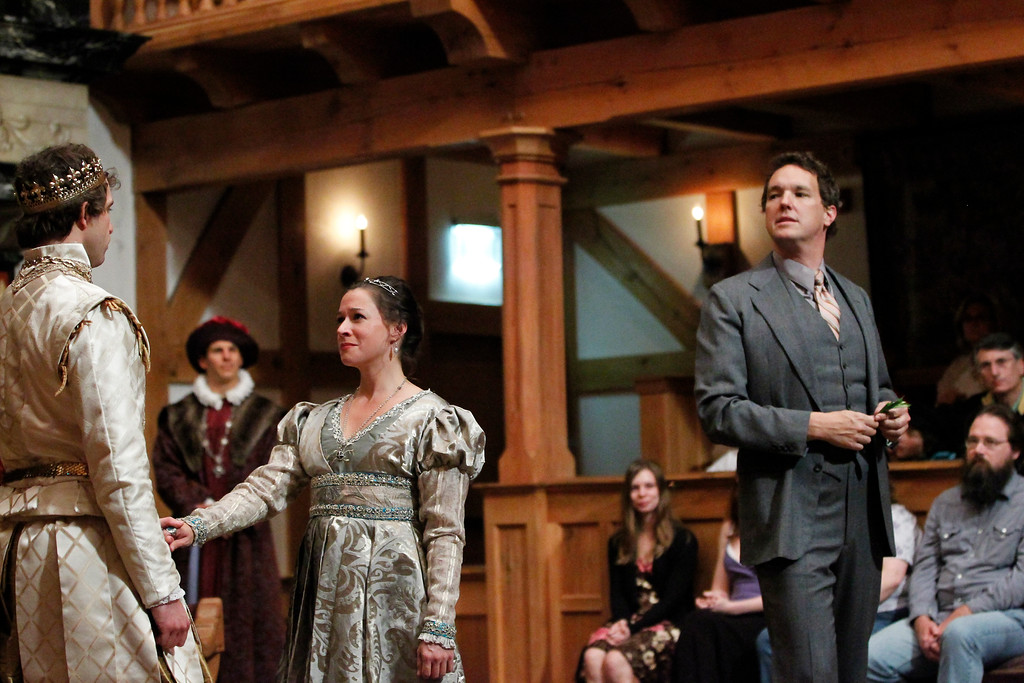 One of the attractions of Shakespeare is that his plays are odd – different not only from other plays but different from one another as well. Henry V, however, may be the oddest – not quite like a play at all. The narrative can barely be called a plot: King Henry V invades France, wins the Battle of Agincourt against the odds, and marries the Princess. The play is stuffed with characters – the Eastcheap gang, the traitors, the English lords, the French court, the English foot soldiers, the English, Welsh, Irish, and Scottish captains, and Princess Kate – but their stories (with the exception of Pistol’s) seem like footnotes to Henry’s, and their realities are completely tied to his.

The Chorus, too, is odd. His function seems to be that of the “color man” for a TV sports event – a cheerleader like Dick Valvano, who, instead of extolling Duke’s Coach K, keeps telling (selling) us the virtues of England’s King Henry V. In fact, everyone in the play directs our gaze at Henry. The archbishops, Pistol, Mistress Quickly, Nym, Captains Fluellen and Gower, the King of France, the Dauphin, the other French nobles, the enlisted men – all of them give us their views of the King. The play is a virtual Rorschach test on how we see Henry.

“Who is this guy?” is a question Shakespeare explored for three years (and the ASC has been exploring it for the last two). Two plays earlier, in his first appearance on stage, Henry himself – then Prince Hal – brings up the subject of who he is when he tells us he is only pretending to be a rakehell so that his “reformation…shall show more goodly and attract more eyes.” His fight to the death with Hotspur is a battle over the right to the name “Harry”; as the new king, he assures us that “Not Amurath an Amurath succeeds, but Harry Harry”; and when he banishes Falstaff, he says, “think not I am the thing I was.”

Paradoxically, in a play so crowded with characters who revolve around the King and care so much about who he is, we sense a great loneliness in his own search to answer that question. That search and its inescapable loneliness may seem to you familiar.

I love this Wooden O of a play, and I think it one of Shakespeare’s great feats of theatrical levitation to make it fly by having us “piece out [its] imperfections with [our] thoughts.” While I was in college, it first unlocked to me a wonder of Shakespeare; while I was in grad school, it gave my second daughter her name Kate; and when I taught at JMU, my production of Henry V (in which the same daughter played Kate to Jim Warren’s Henry) would lead to the formation of a touring Shakespeare company called the Shenandoah Shakespeare Express.

“…if the cause be not good, the King himself hath a heavy reckoning to make.”