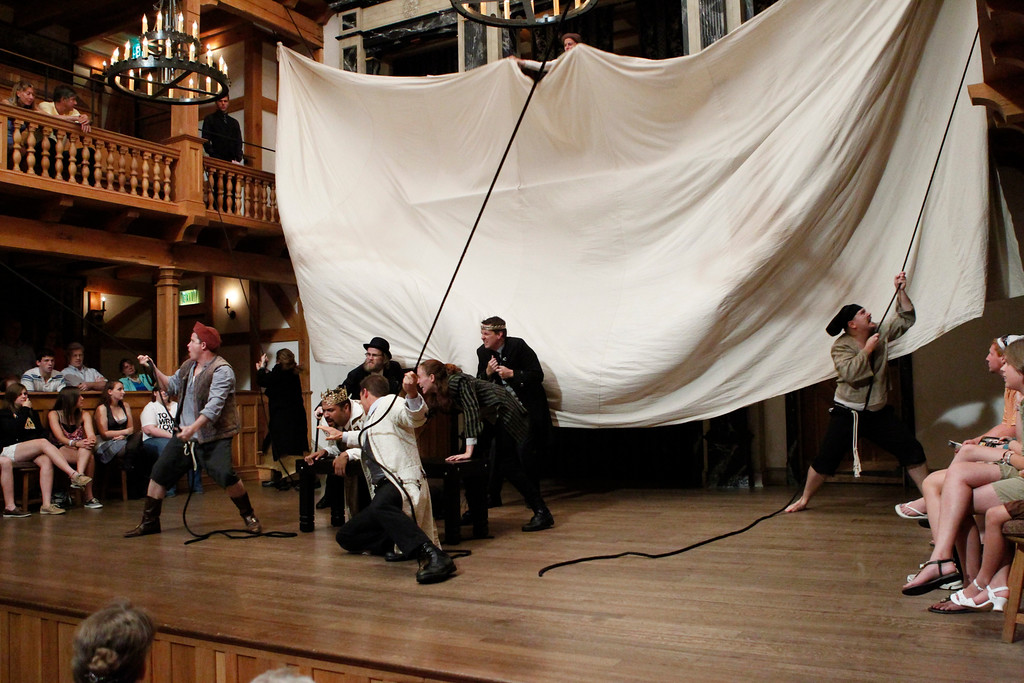 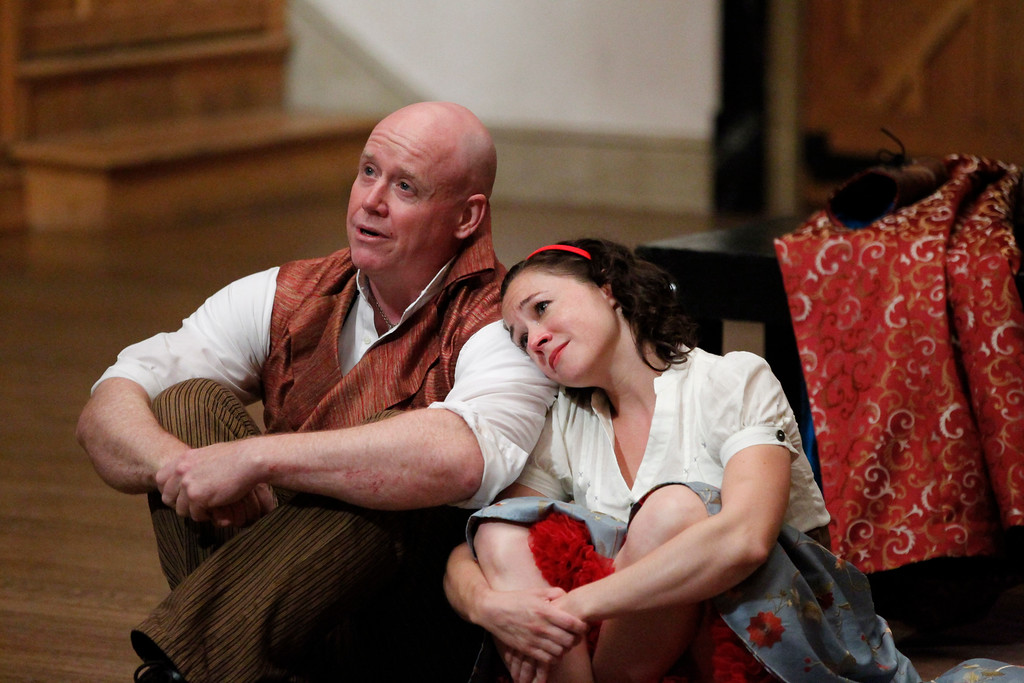 James Keegan and Miriam Donald in THE TEMPEST. 2011. 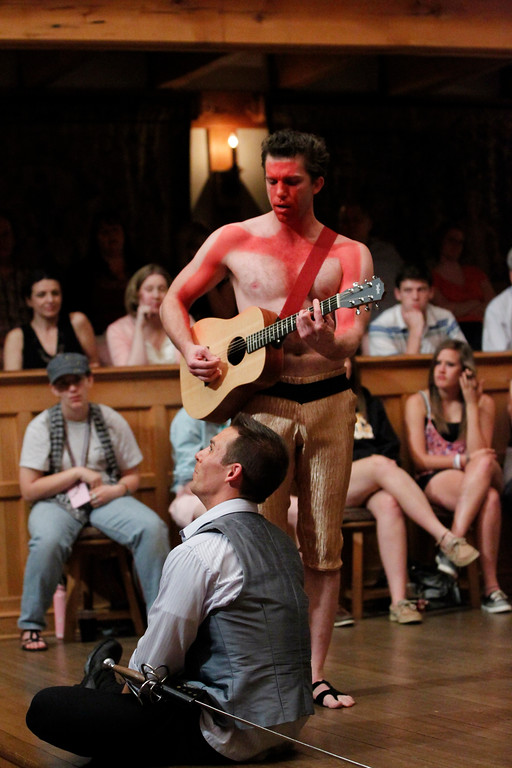 Patrick Midgley and Gregory Jon Phelps in THE TEMPEST. 2011. 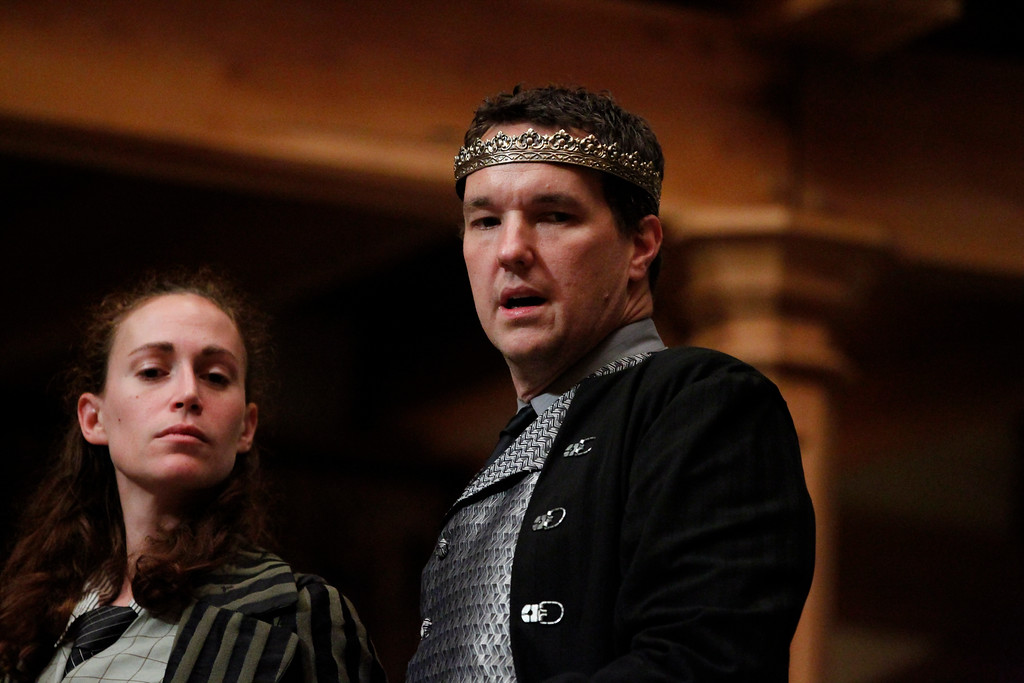 Blythe Coons and John Harrell in THE TEMPEST. 2011. 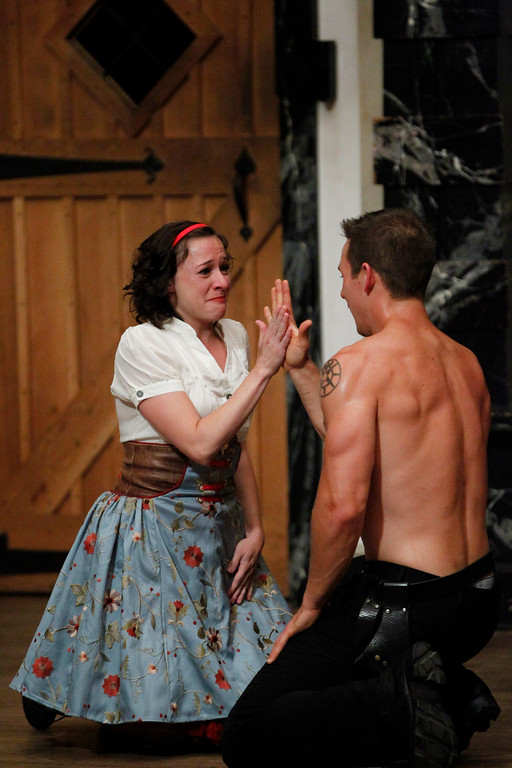 Miriam Donald and Patrick Midgley in THE TEMPEST. 2011. 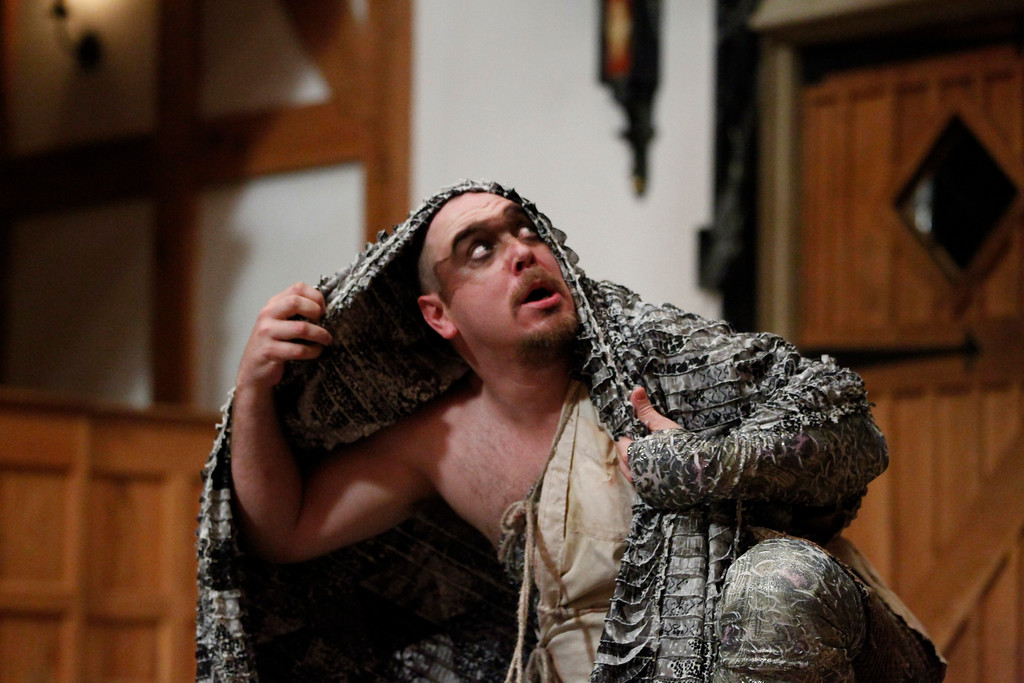 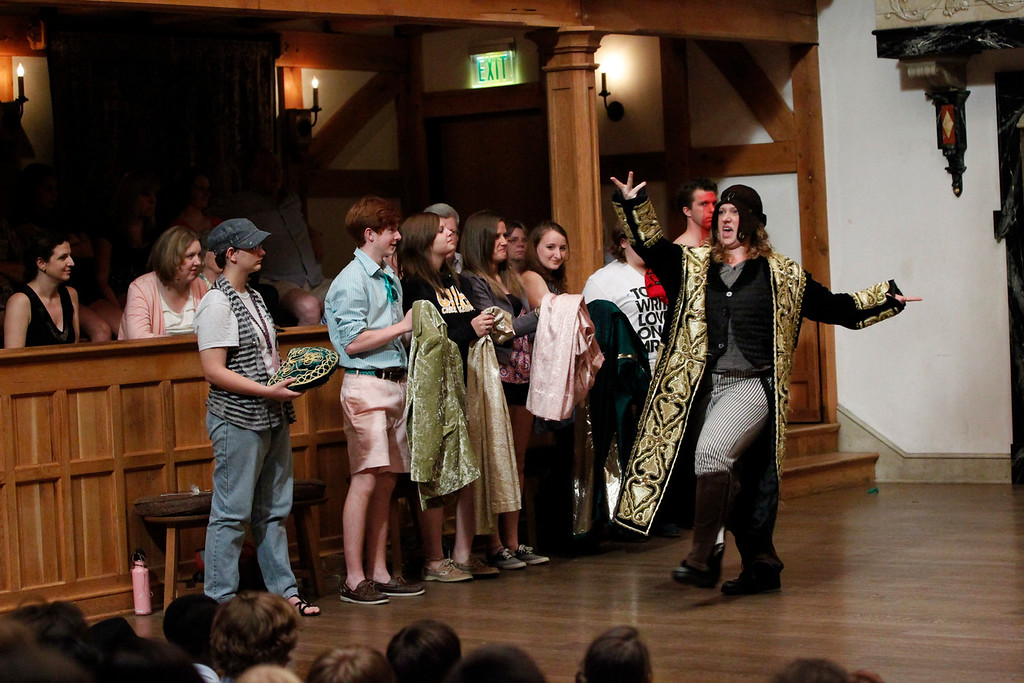 Allison Glenzer in THE TEMPEST. 2011. 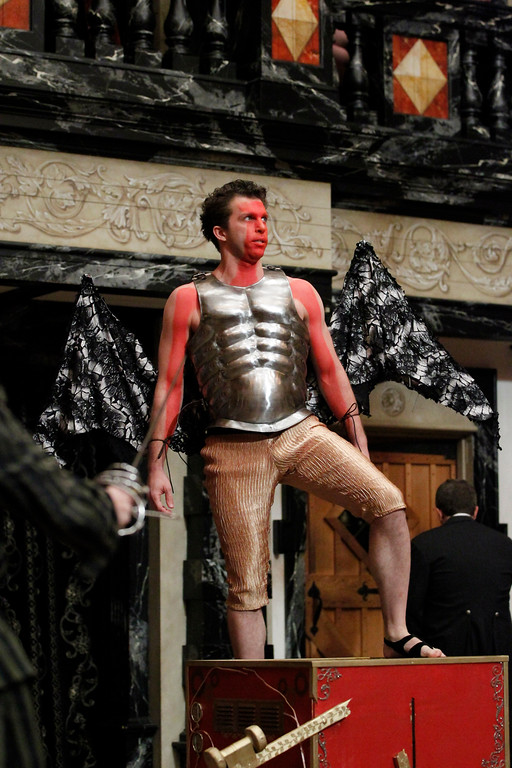 Gregory Jon Phelps in THE TEMPEST. 2011. 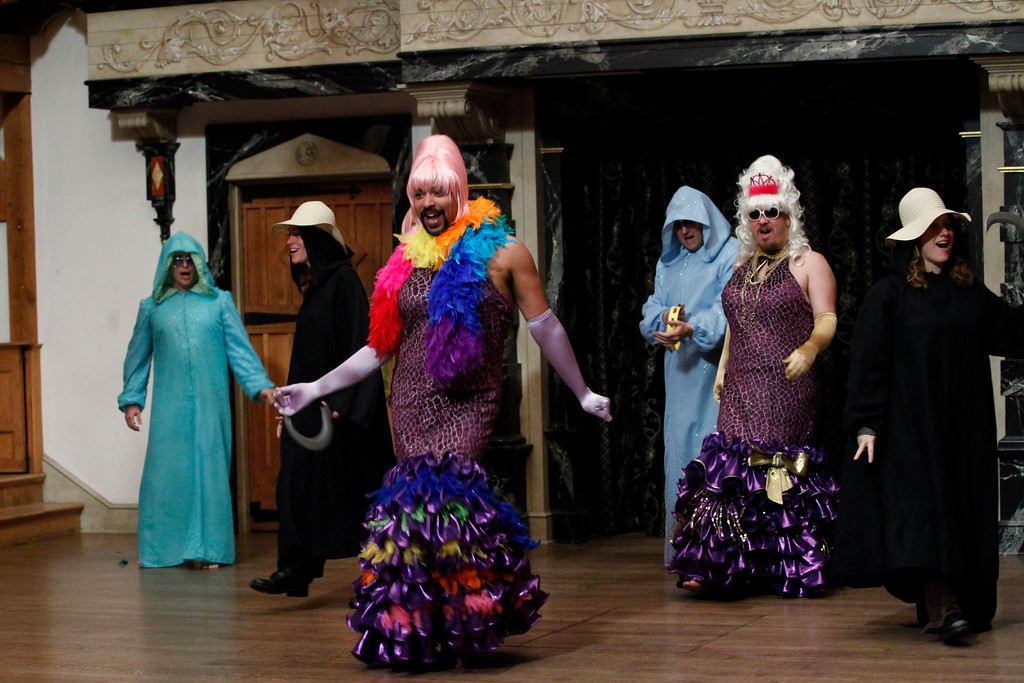 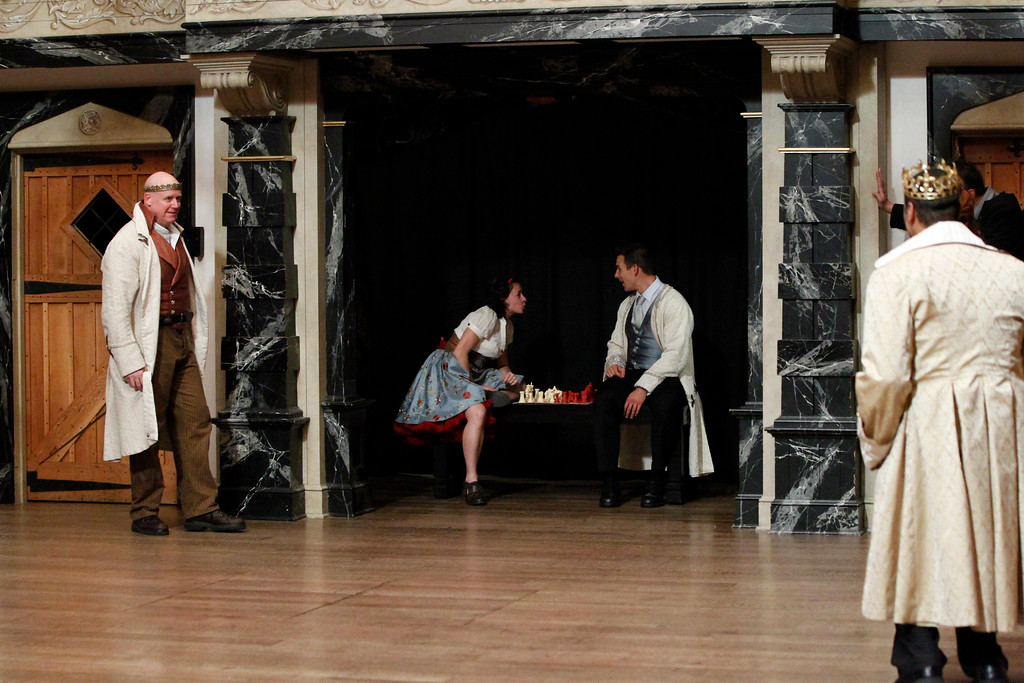 Every Exit is an entrance

The Tempest appeared in print for the first time in 1623 as the opening play in the first complete works of William Shakespeare, the First Folio. That’s a lot of “firsts” for the play that was the last one Shakespeare wrote by himself.

Throughout the centuries critics have drawn autobiographical parallels between Shakespeare and Prospero. Many essays and books focus on Shakespeare’s last solo play as his “swan song” – comparing Prospreo leaving behind his island, his magic books, his co-islanders, and breaking his magic staff to Shakespeare’s retiring from London, leaving his Globe, his plays, his theatre company, and breaking his “magic pen.” Many illustrations reinforce this image and depict Prospero as an ancient, Gandalfian/Dumbledorean sage using his staff as a cane. Productions, too, have often softened Prospero’s Machiavellian edge, presenting instead a benign senior citizen who dabbles in Dungeons and Dragons.

I’m not particularly interested in our production hammering home the notion of Prospero as a “Shakespearean figure.” Although the autobiographical parallels are undeniable, they are not particularly helpful in staging the play Shakespeare wrote. In addition, I don’t think this play is “about” retirement, giving up, or the golden years as much as I think it wrestles with the other side: new beginnings, fresh starts, and brave new worlds. Even though he has to grapple with difficult decisions in choosing to break, bury, and drown his “potent art,” our Prospero won’t be retiring when he leaves his island. He’s going back to work as the Duke of Milan after a twelve-year leave of absence. And who says Prospero belongs to the octogenarian crowd? Not Shakespeare. He has to be only old enough to have a fourteen or fifteen-year-old daughter.

Other beginnings at the play’s end include Miranda and Ferdinand embarking on their new lives together while Ariel and Caliban gain their freedom – Ariel to “be as free as the mountain wind,” Caliban to roam the unpeopled island once again. Only the healing balm of forgiveness makes these beginnings possible. Prospero must forgive those who exiled him; Ferdinand must forgive Prospero for putting him through trials. We are left to wonder in Ariel and Caliban forgive Prospero for enslaving them.

Often categorized as one of Shakespeare’s late “Romance” plays, The Tempest nevertheless resists easy classification. Simultaneously a love story and a magical revenge play, it’s also a farcical romp. But while the structure of the story invites delight and excitement, the play’s darker underbelly remains undeniable. Prospero forces both Ariel and Caliban to do his bidding; are they the children of his magic or are they his slaves? Prospero and Ariel enjoy the torments they inflict on others. We hear the story of Caliban’s attempt to “violate the honor” of Miranda. Antonio and Sebastian plot to kill the king. Stephano and Caliban plot to kill Prospero. Shakespeare seems to ask for our sympathy and loathing in alternating patterns for characters who don’t seem to fit neatly into classifications of heroes or villains. By refusing to write a play that lives in one specific genre, Shakespeare creates a dramatic comedy that flirts with elements of fantasy and breathes with the danger and ambiguity of real life.