From Shylock’s unjust Venice to Portia’s golden Belmont, The Merchant of Venice is at once a comic love story and a passionate discourse on justice and mercy. Both entertaining and disturbing, this magnificent comedy will have you asking “who are the heroes and who are the villains?” 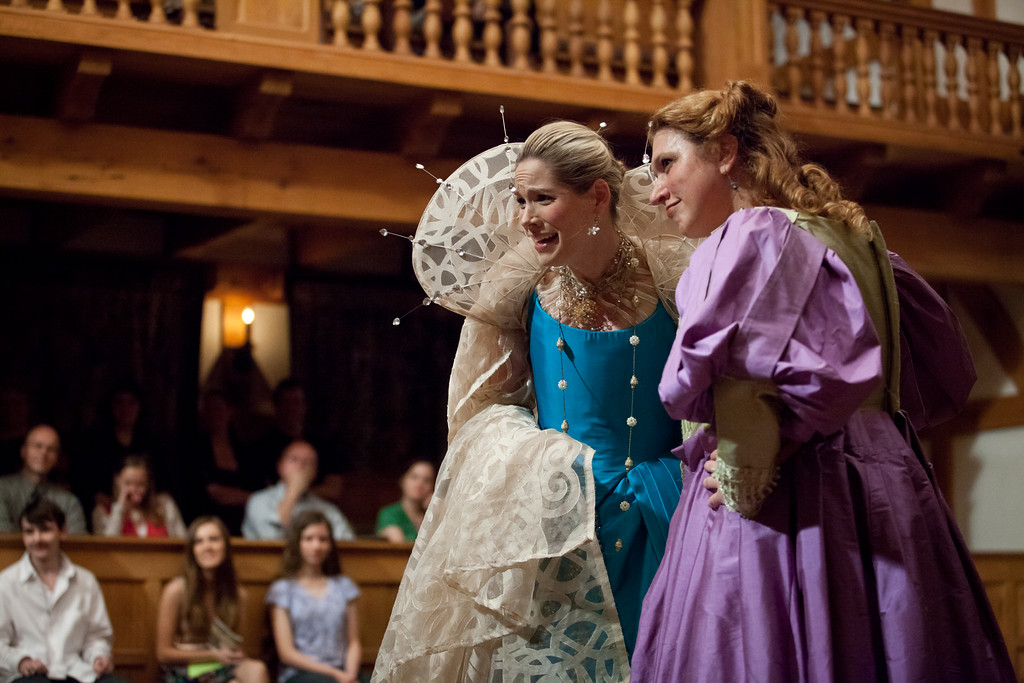 Tracie Thomason and Allison Glenzer in THE MERCHANT OF VENICE. 2012. 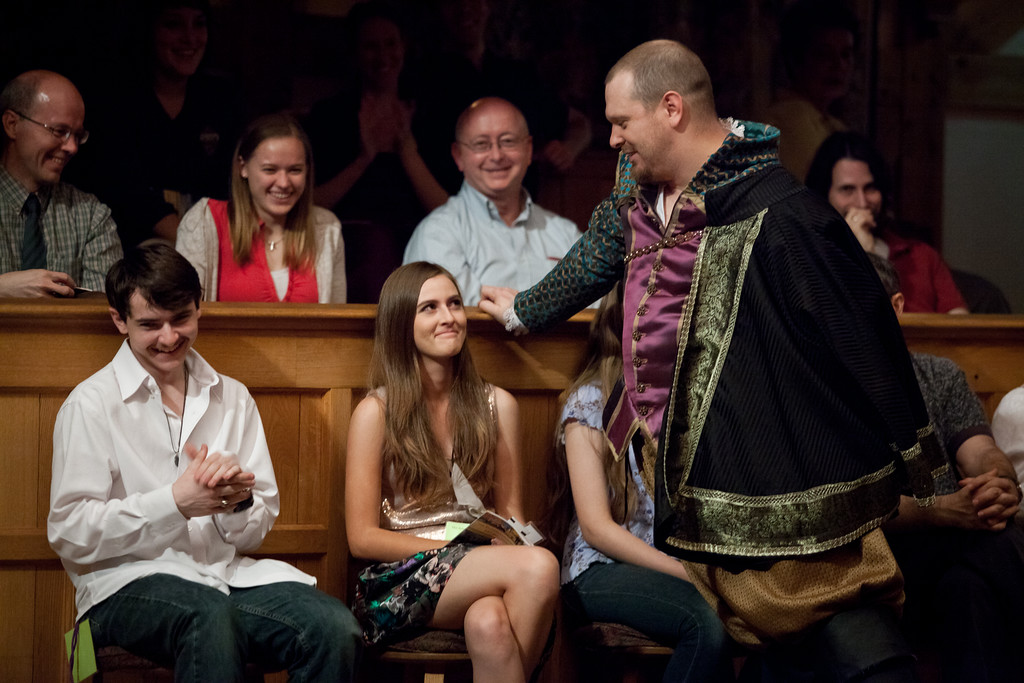 Benjamin Curns in THE MERCHANT OF VENICE. 2012. 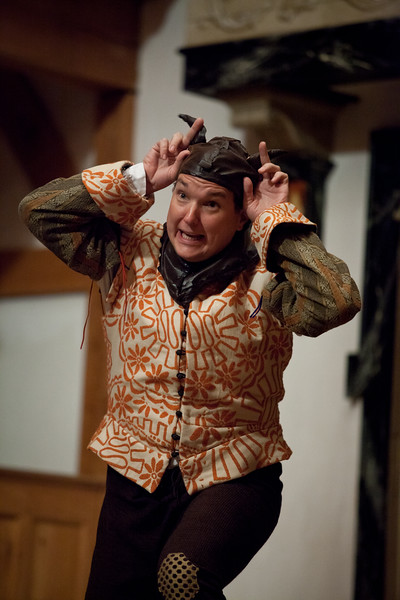 John Harrell in THE MERCHANT OF VENICE. 2012. 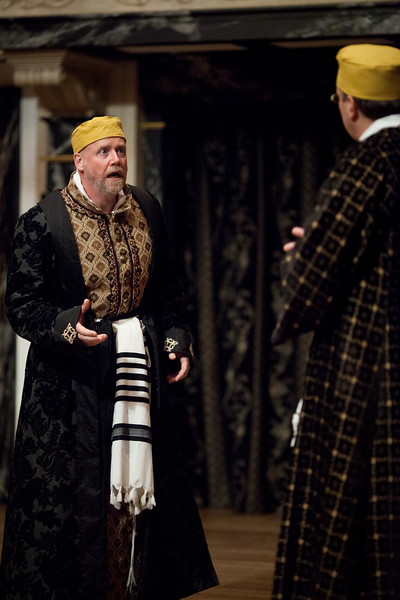 James Keegan in THE MERCHANT OF VENICE. 2012. 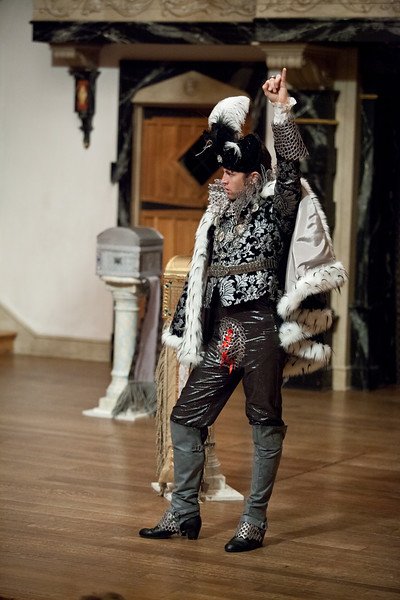 Chris Johnston in THE MERCHANT OF VENICE. 2012. 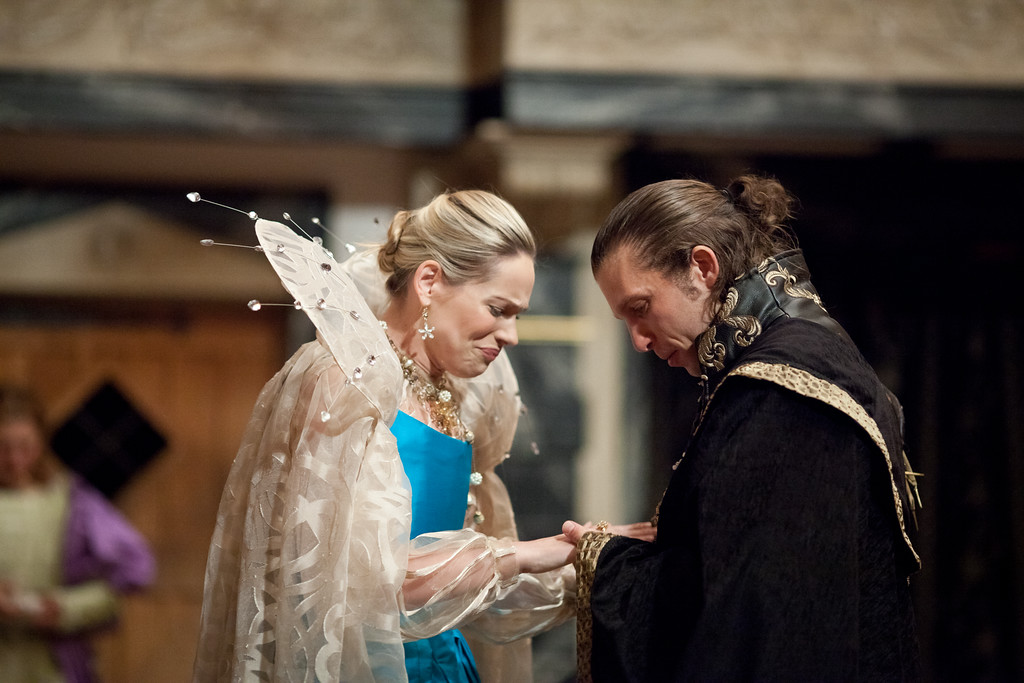 Tracie Thomason and Gregory Jon Phelps in THE MERCHANT OF VENICE. 2012. 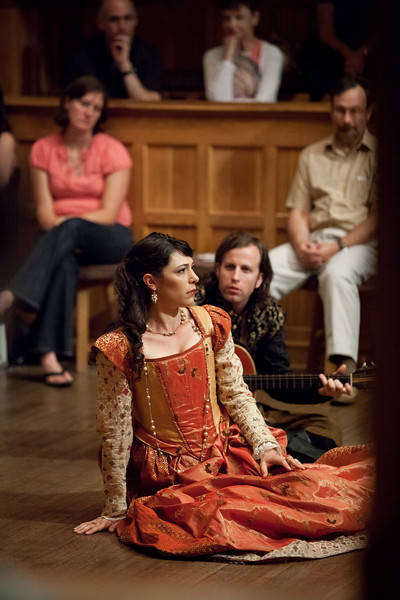 Abbi Hawk and Chris Johnston in THE MERCHANT OF VENICE. 2012. 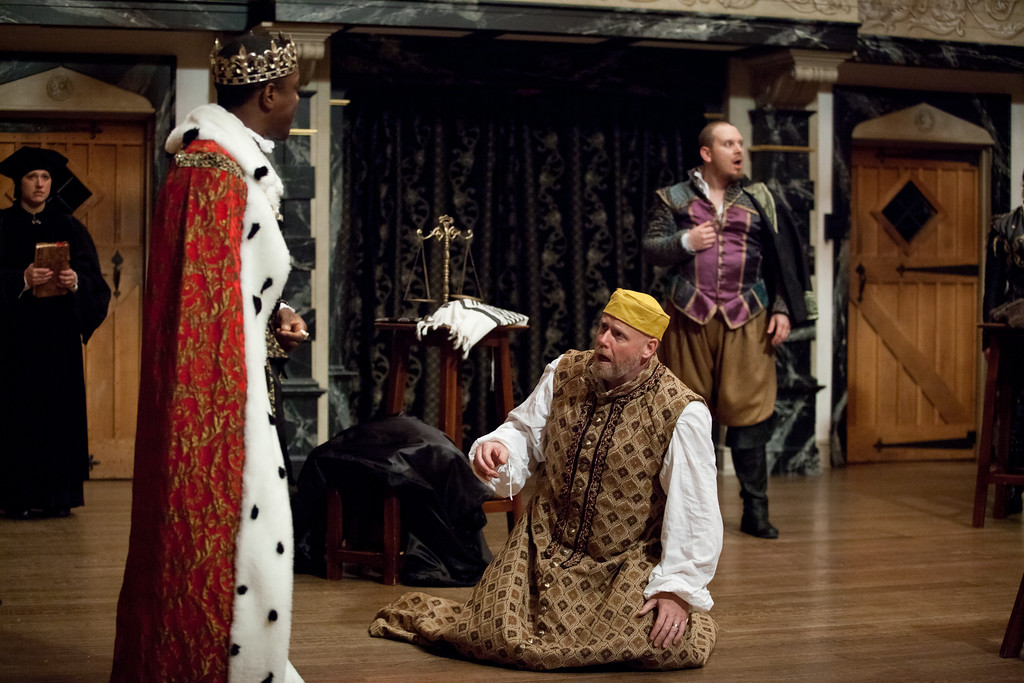 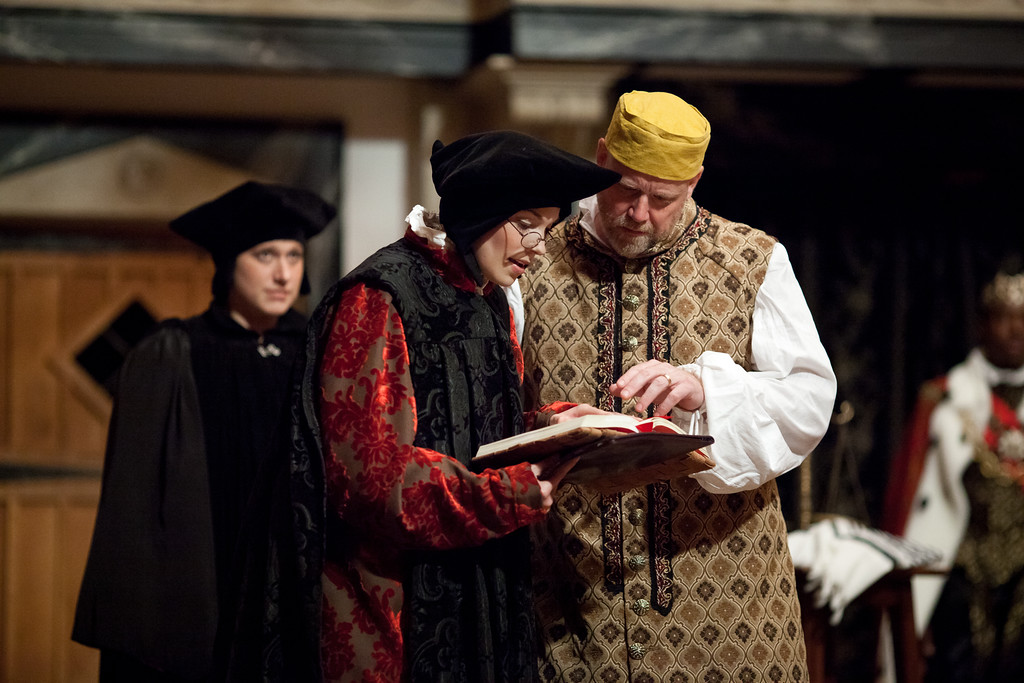 Allison Glenzer, Tracie Thomason, and James Keegan in THE MERCHANT OF VENICE. 2012. 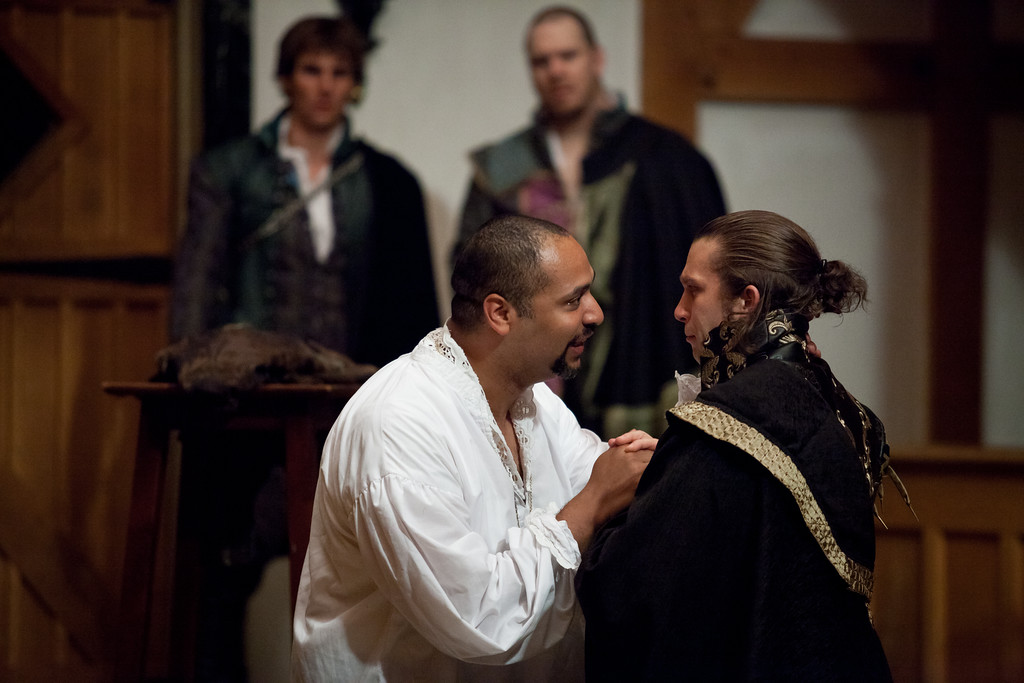 René Thornton, Jr. and Gregory Jon Phelps in THE MERCHANT OF VENICE. 2012.

We could be heroes

Shakespeare gives The Merchant of Venice all the elements of a traditional “comedy,” but he also weaves in issues that are darker and more dramatic than the serious material in his earlier comedies. In Merchant, Shakespeare explores justice and mercy by reaching into his characters’ souls and shining a light on the prejudice and fear he finds there. Four hundred years later, the bigotry and hatred he exposes seem every bit as volatile, as vibrant, as meaningful, and as unresolved as they were when he first created Shylock and Antonio’s Venice.

Some productions of Merchant in our post-Holocaust world seek to apologize for a playwright presumed to be anti-Semitic; and directors often try to package the problematic issues the play raises with neat and tidy final answers. The two founders of the ASC (one a Christian, the other a Jew) believe thee Shakespeare who wrote this play was not an anti-Semite, but a writer brilliantly exhibiting and dissecting anti-Semitism.

Shakespeare creates Christian “heroes” who spew some pretty ugly bigotry. The Jew-baiting is led by Antonio: “I am as like to call thee [dog] again, to spurn thee too,” echoed by Salarino and Solano: “…the dog Jew did utter in the streets ‘My daughter! O my ducats!'” and championed in the courtroom by Gratiano: “O, be thou damned, inexecrable dog!…for thy desires are wolvish, bloody, starved, and ravenous!”

The entire lesson behind the test of the caskets (don’t judge a book by its cover, all that glisters is not gold) seems to be lost on Portia who hopes the black Prince of Morocco fails to win her because of his skin color: “if he had the condition of a saint and the complexion of a devil, I had rather he should shrive me than wive me.” When he chooses the wrong casket, Portia says: “A gentle riddance: may all of his complexion choose me so.”

Accepting the notion that racism and bigotry were simply “how things were back then” is to assume a moral superiority for our modern world and to assume that Shakespeare was ignorant, floundering in an unenlightened age, rather than a playwright capable of creating a textured story with complicated and flawed characters.

Some productions deal with the play’s ambiguity by cutting, softening, or ignoring the bigotry to tell a more palatable love story. More often, productions go to the other pole to minimize the romantic comedy and make the racial and religious nastiness the focal part of the story and turn Shylock into nothing but an abused victim, whitewashing Shylock’s character and ignoring the vicious things HE says and does: “II hate him for he is a Christian.” The horrors of the Holocaust have produced a residual Gentile guilt that causes some directors to want to make every Jewish character sympathetic in every situation. But Shakespeare gives us no political correctness in Merchant; Shylock can be extremely unsympathetic and most of the other characters are filled with both faults and virtues. Just like real people.

With this Merchant, we’re attempting to tell the love story without masking the spiritual and moral warts that blemish the “heroes.” We’re also choosing to tell Shylock’s story without watering down either his harshness or his humanity.