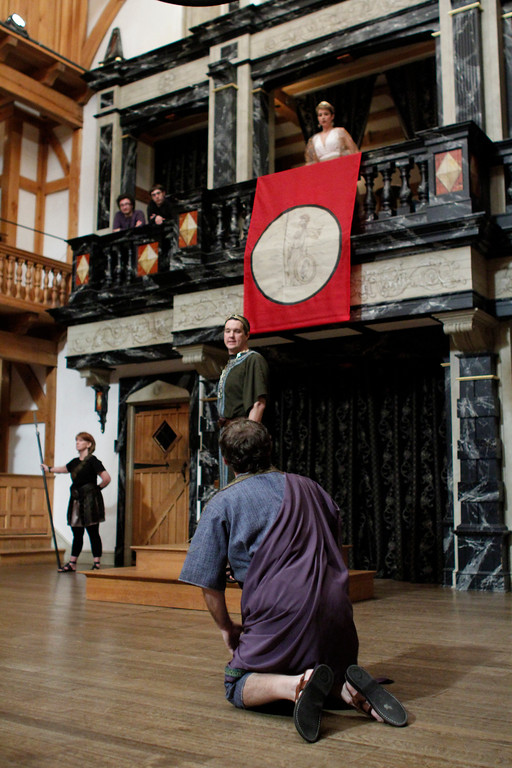 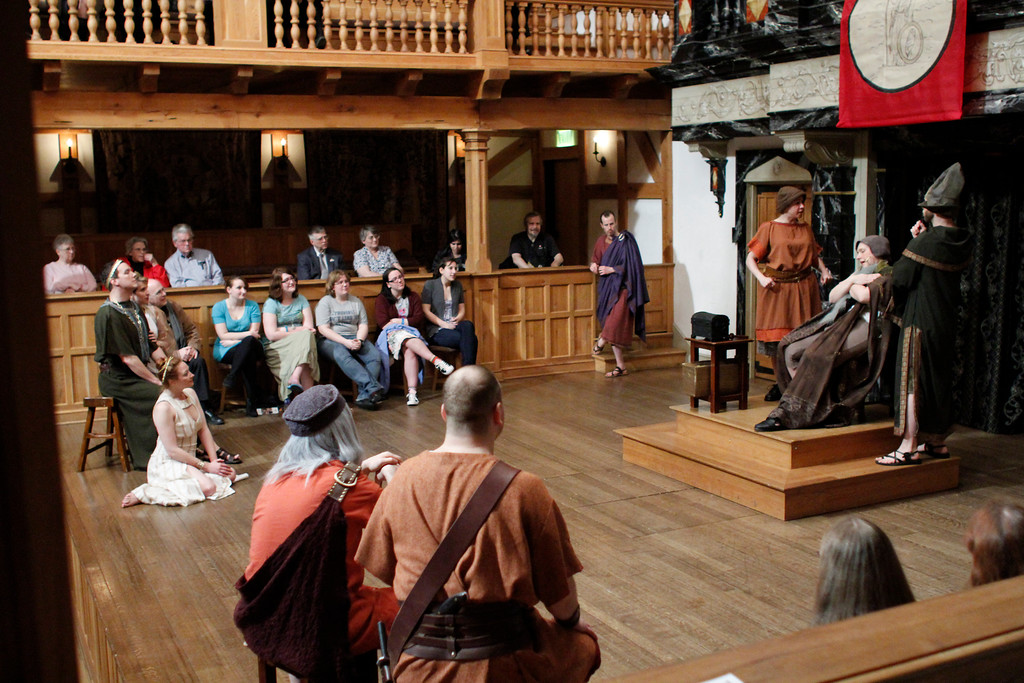 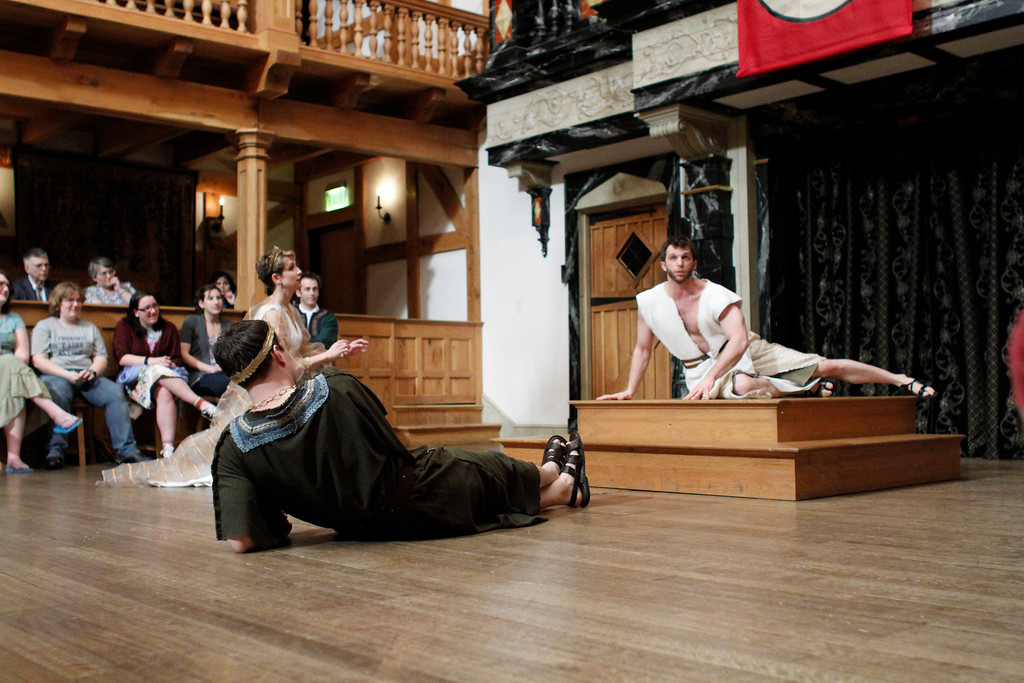 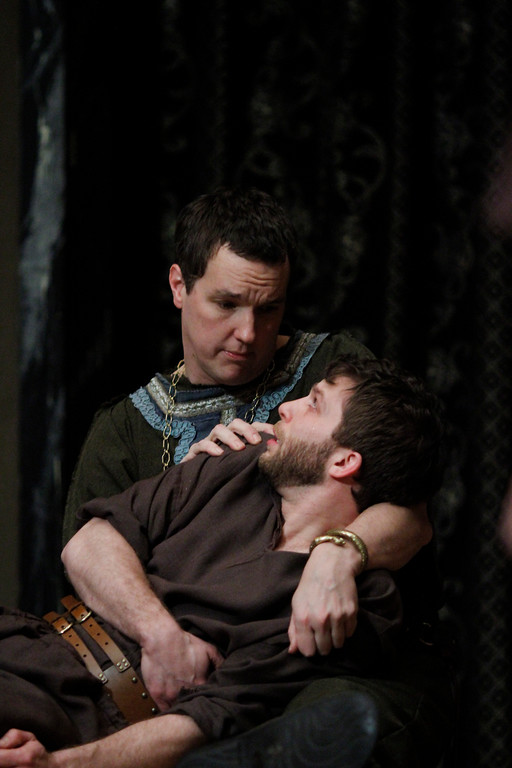 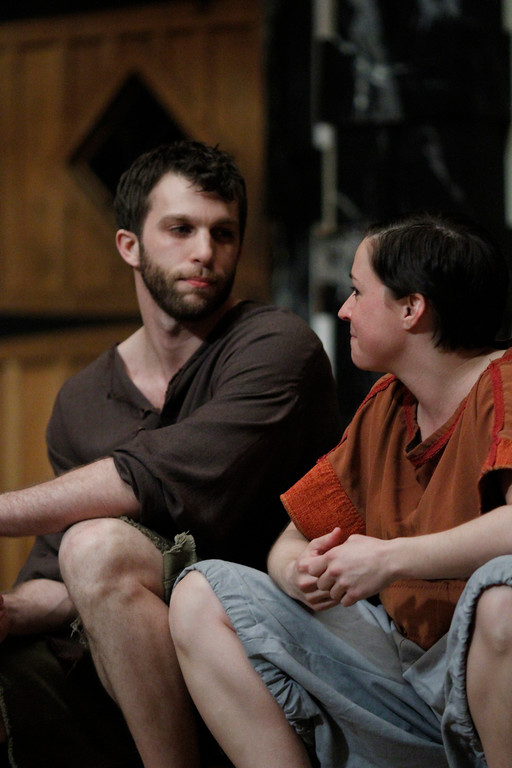 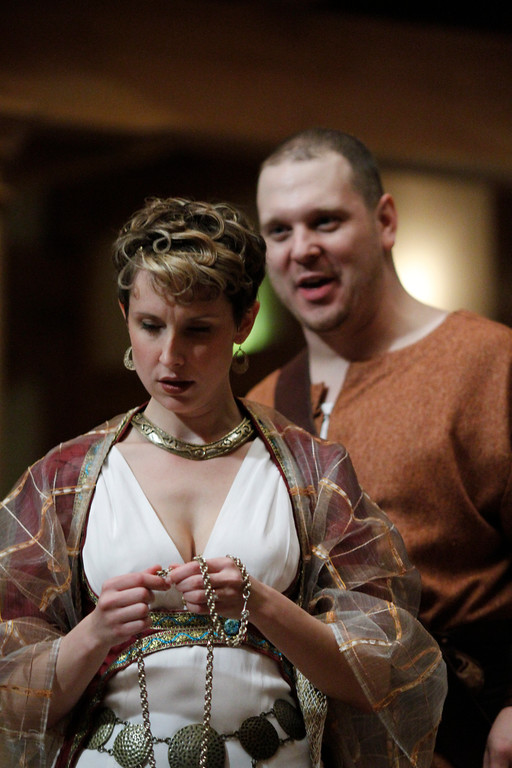 Denice Burbach and Benjamin Curns in THE ROMAN ACTOR. Photo by TOMMY THOMPSON. 2010. 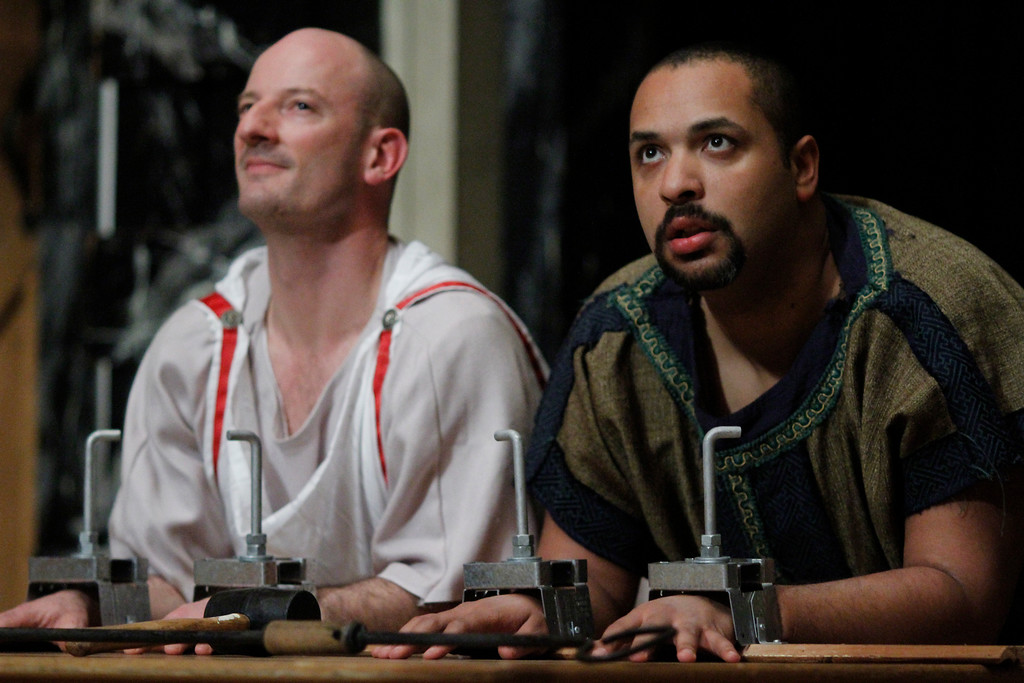 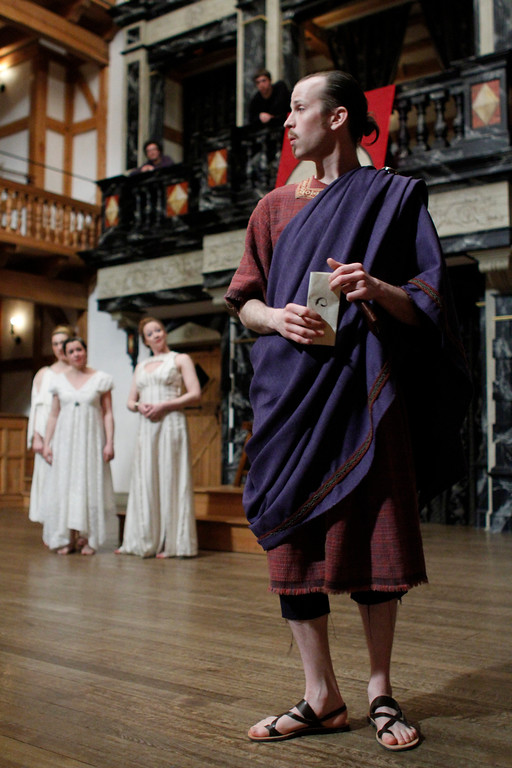 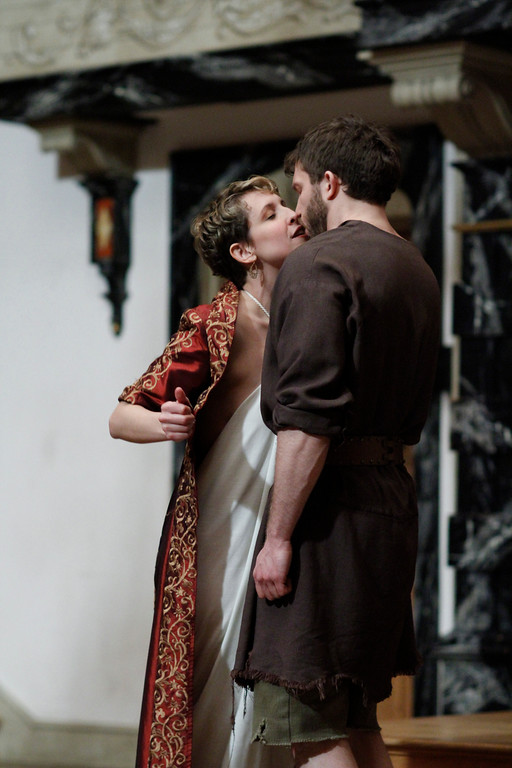 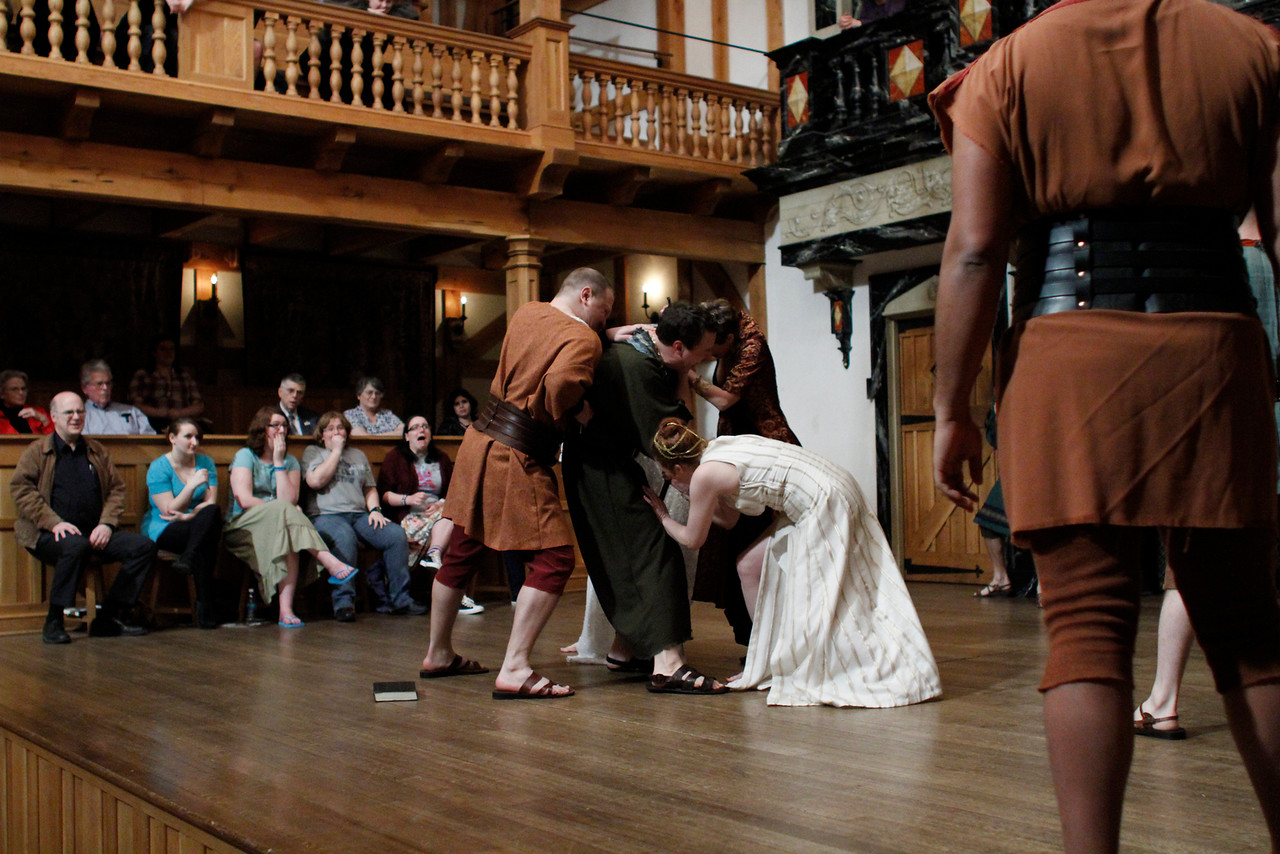 2. Where was the play first performed?
At the Blackfriars Playhouse by the King’s Men.

3. Who wrote it?
Philip Massinger (1583-1640), whose father served as a member of Parliament, was educated at St. Albans, Oxford, and succeeded John Fletcher (who succeeded Shakespeare) as the company playwright for the King’s Men. His most famous plays are A New Way to Pay Old Debts and The City Madam, but The Roman Actor was his personal favorite. He died in 1640 and was buried in what is now Southward Cathedral, where you can see his stone next to those of his mentor Fletcher and Shakespeare’s brother Edmund.

4. How is this playwrights like Shakespeare?
Some of his characters have Shakespearean size, and at the heart of The Roman Actor is a Shakespearean fascination with plays within plays.

6. What do scholars think about this play?
Because we have the cast list from this play and because it so clearly is about the connection between the King’s Men and politics, the play has long been an important window into the Caroline world of theatre. Respect for the play as a piece of theatre has grown ever since the Royal Shakespeare Company staged the play (with Anthony Sher as the tyrant, Domitianus Caesar) in 2002. Fans of the ASC’s Bring ’em Back Alive series already knew that after a reading of the play earlier in 2002.

7. Is there any controversy surrounding the work?
The play is a not-so-veiled message to the new King Charles warning against despotism.

8. What characters should I especially look for?
Casear is an unforgettable tyrant, whether he is played as a ferocious animal (Anthony Sher) or a menacingly witty and sardonic mastermind (Gordon Braden).

9. What scene should I especially look for?
Paris’s speech about the importance of theatre became a set piece in the English theatre, Domitia’s seduction of Paris is riveting as is the play they put on “for” Caesar. Warning: the play contains a scene of torture.

10. What is the language like?
Though Massinger’s language here is beautiful and hearkens back to Shakespeare and Jonson, it also sounds more modern by a generation.