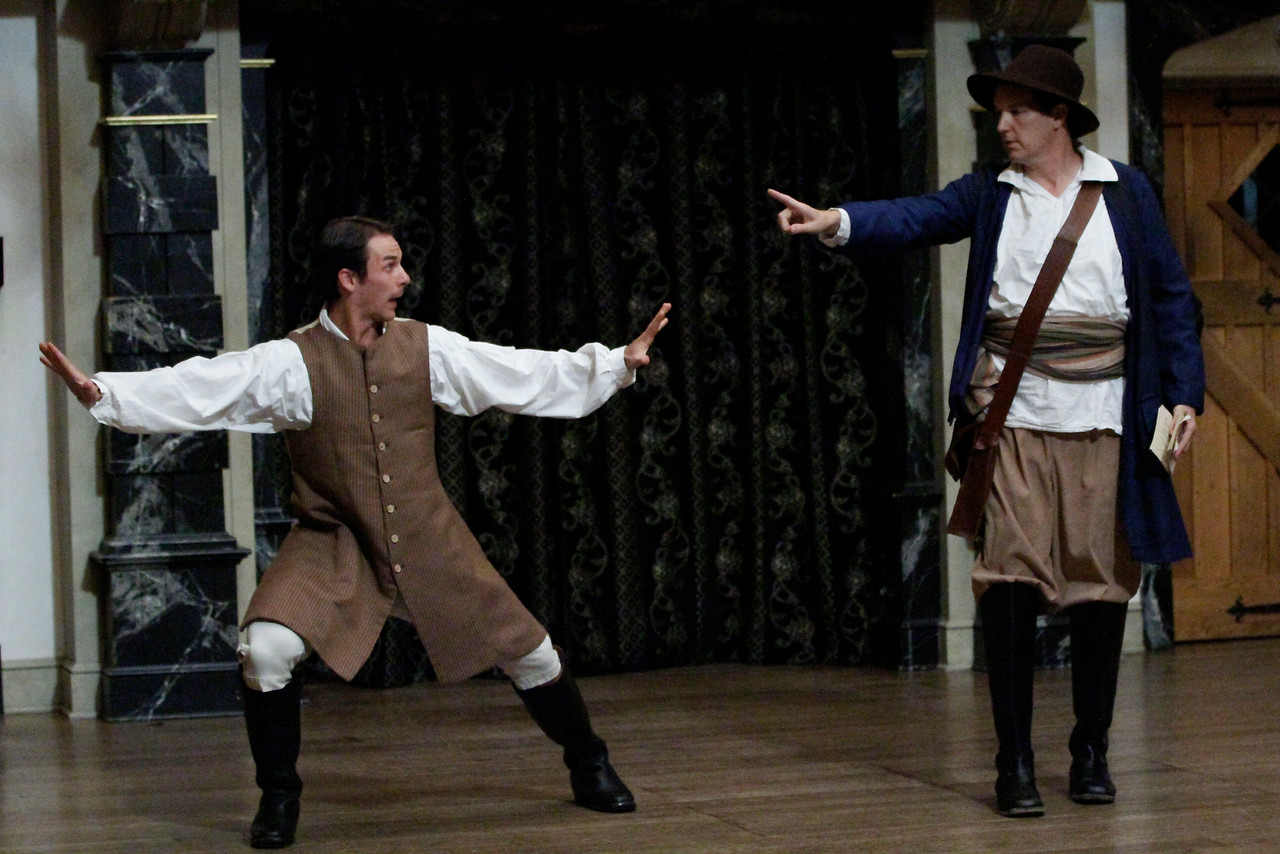 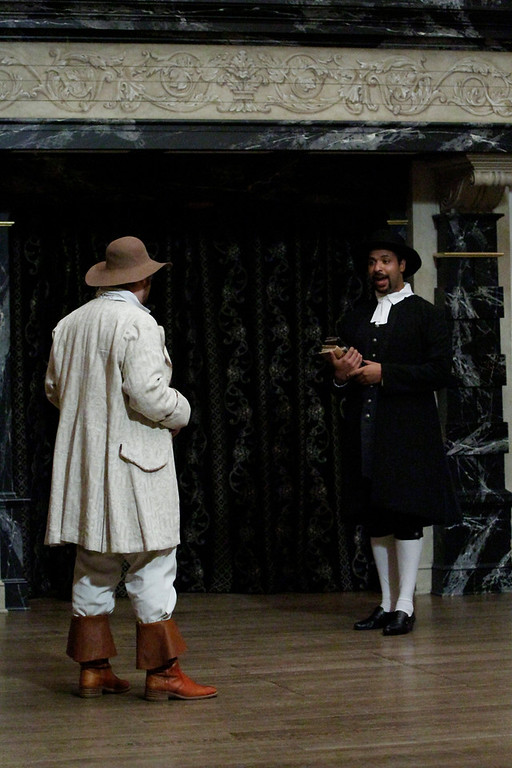 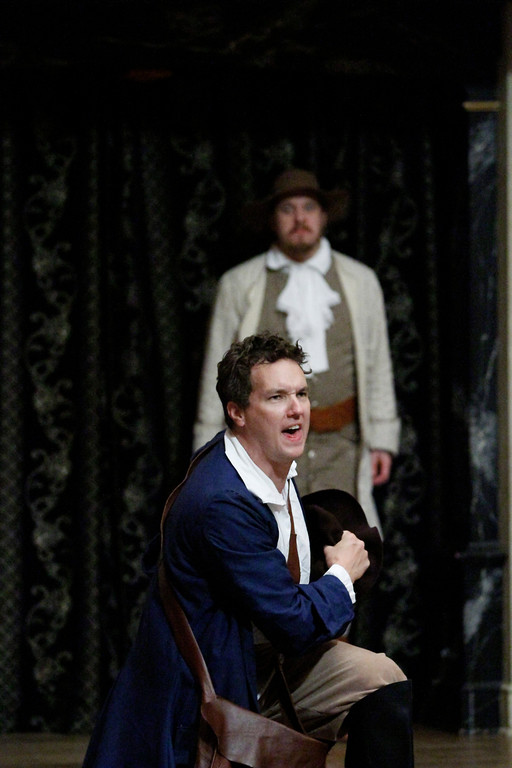 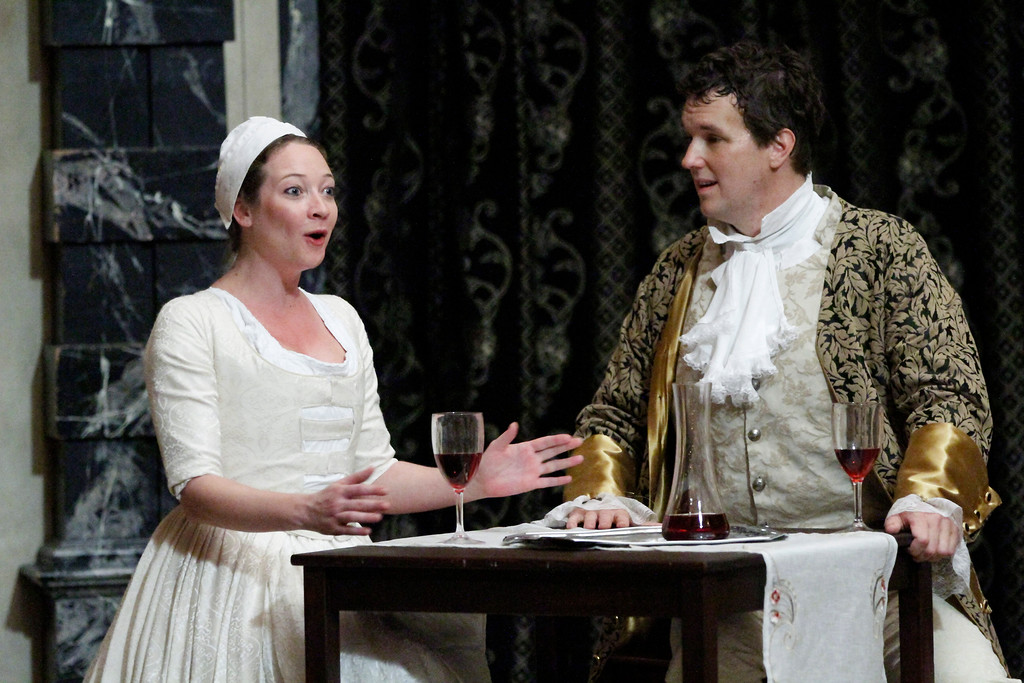 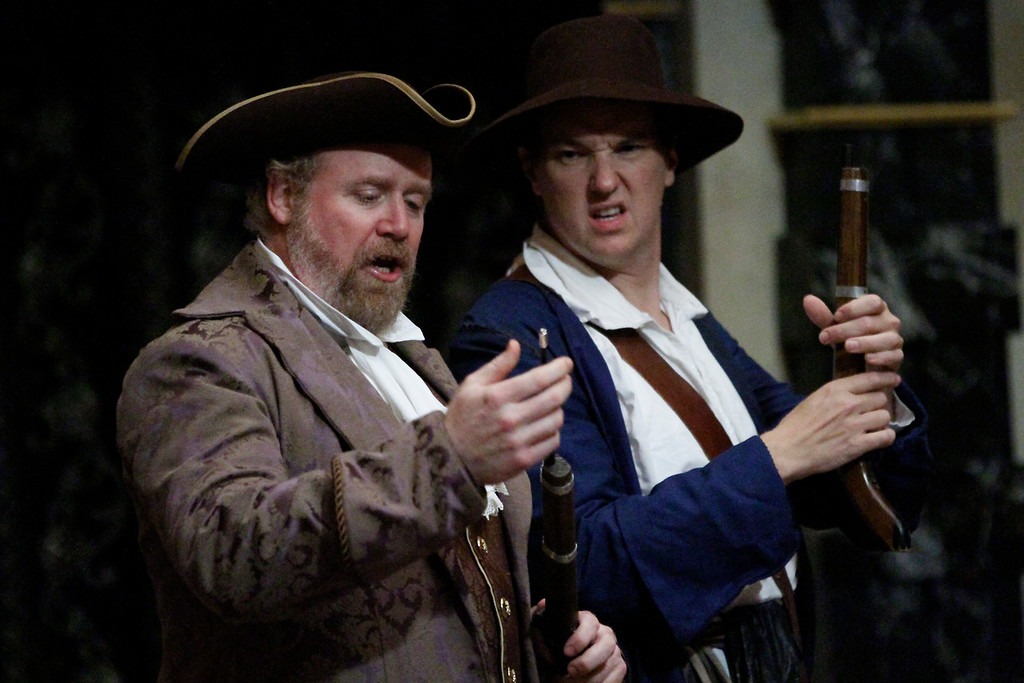 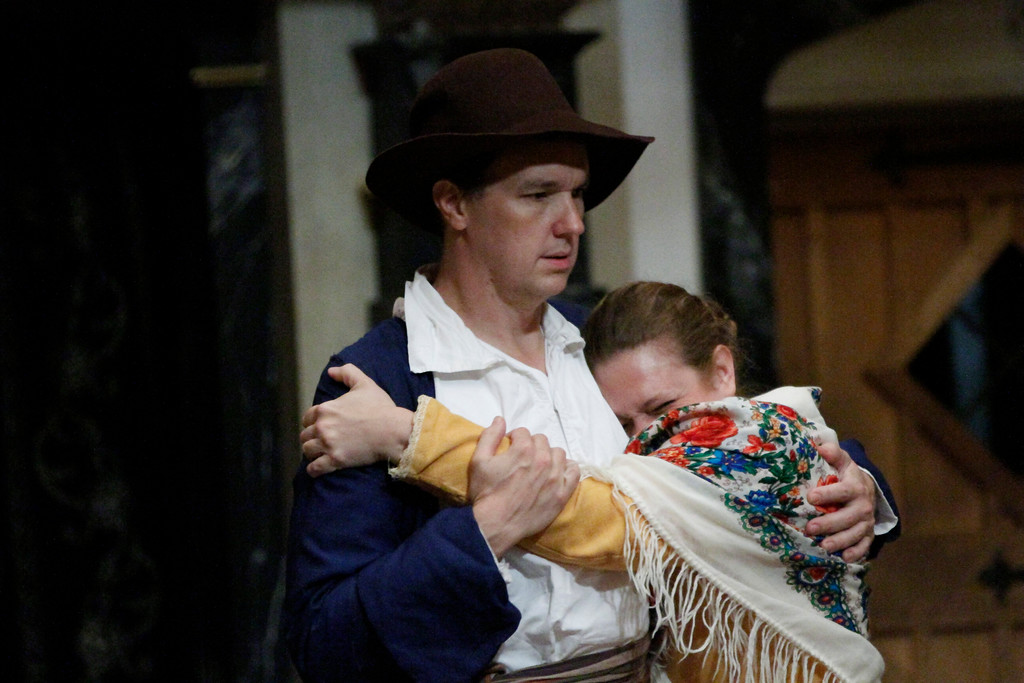 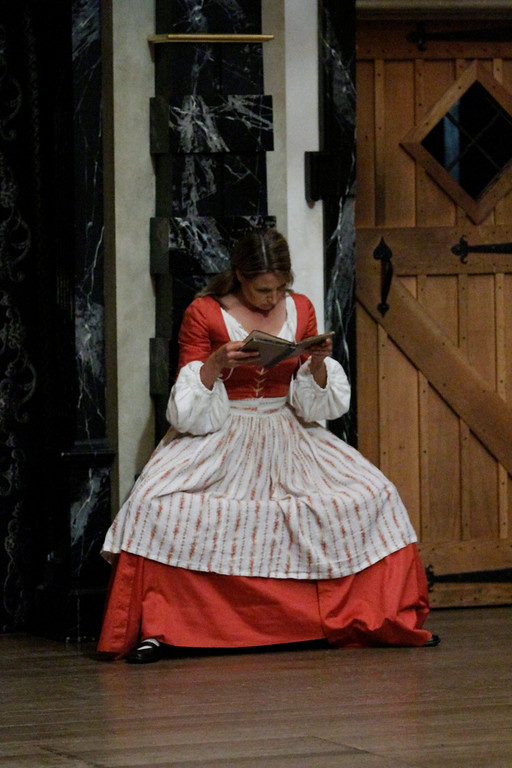 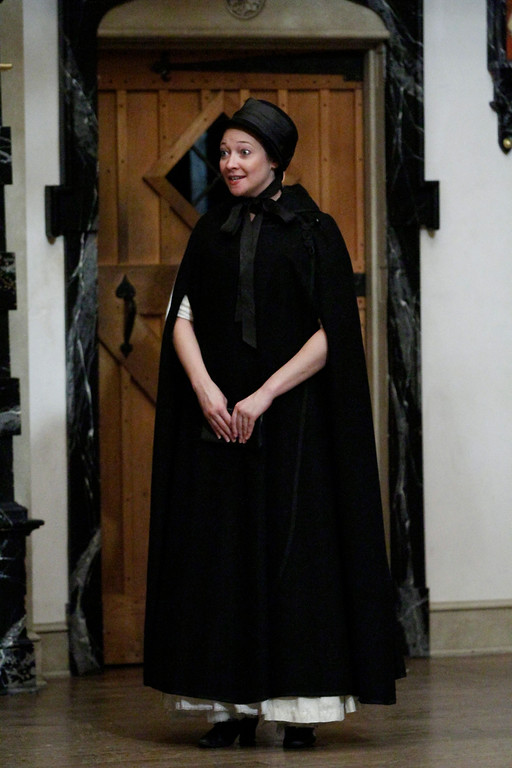 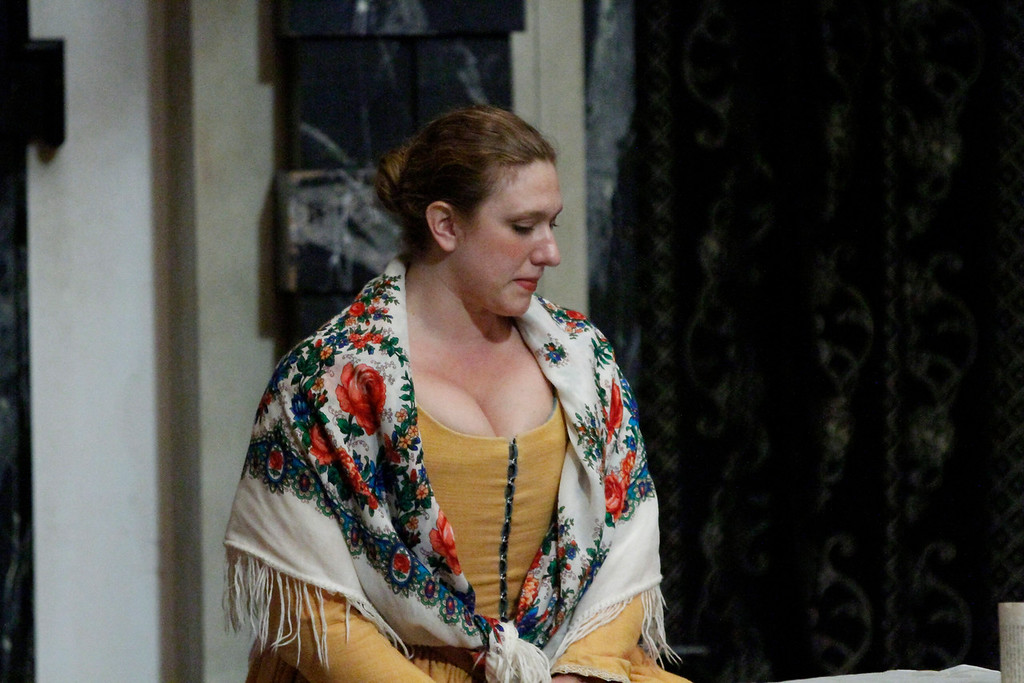 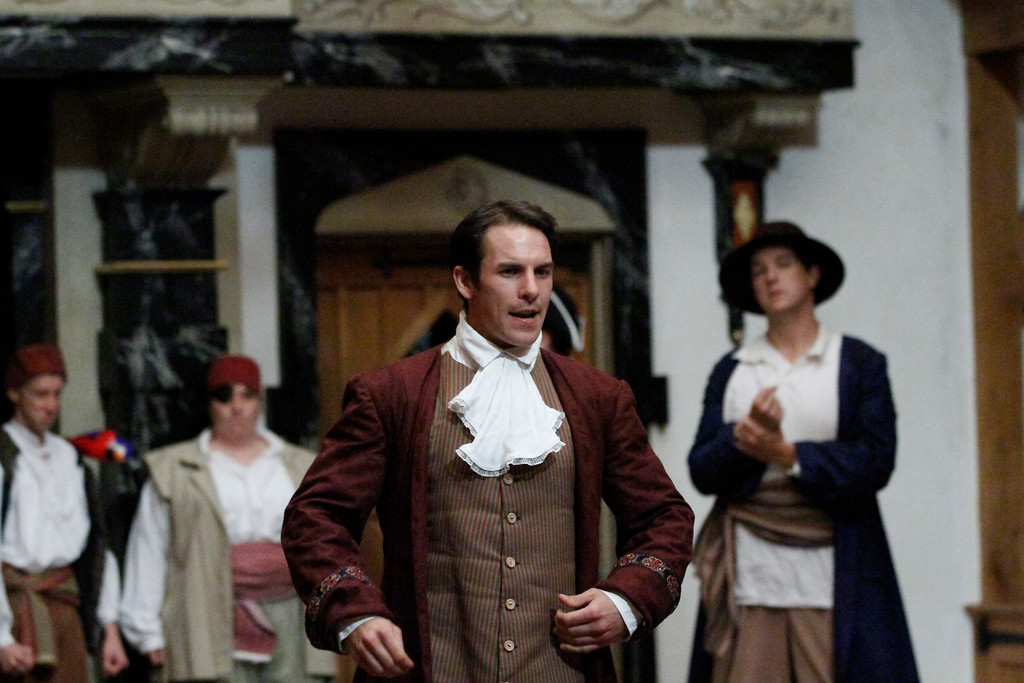 Patrick Midgley and the cast of WILD OATS. Photo by TOMMY THOMPSON. 2010.

Near the end of Shakespeare’s career, indoor playhouses like the Blackfriars were inundated with entertainments called masques, which combined poetic drama, music, song, dance, elaborate costuming, and stage spectacle. In his final solo work, The Tempest, Shakespeare even mocks this new, chic movement by having spirits perform a masque which puts the main character, Prospero, to sleep. After Shakespeare’s death in 1616, his own plays were often performed with min-masques inserted at the top of the show and during several intervals throughout. The lavish style of masques stayed in fashion until 1642, when the Puritans closed the theatres.

The Restoration period began in 1660 when King Charles II was restored to the throne. He reopened the theatres, and for the next one hundred years, popular plays were greatly influenced by French comedies of manners. By the mid-1700’s, sentimental comedies tried to tell audiences how to feel rather than evoking real emotion (or laughs), and they bore little resemblance to the kind of robust and romantic comedies produced during Shakespeare’s golden age.

Oliver Goldsmith, the one-hit playwright, wrote She Stoops to Conquer in 1773, breaking the decades-long grip held by the lavish and preachy plays that came before it. She Stoops became a huge hit and Goldsmith promptly died a year later. She Stoops is one of the first (and few) post-Restoration plays to feel a lot more like Shakespeare. Wild Oats is one of the others.

Thought not as well known (yet) as She Stoops, Wild Oats is a delightful celebration of actors and acting, of players and playing, of friendship, love, and family. Playwright John O’Keeffe, creates Rover, a professional actor who spends much of his offstage time quoting and rehearsing lines from dozens of plays and playwrights, including quite a bit of Shakespeare. Sometimes Rover will quote lines “correctly,” and sometimes he wil take lines and bend them to suit his situation. Part of the fun John Harrell and I will have in rehearsals will include looking at each quote, deciding what’s important about the play/character/situation from which it comes, debating whether Rover is purposely bending the quote or inadvertently misremembering, and deciphering the lines that O’Keeffe may have gotten wrong or took from a Restoration adaptation of a play, OR throwing all of that stuff out the window and letting the words just come out of John’s/Rover’s mouth.

One of the most important plot points of Wild Oats comes when Rover quotes lines from a play called The Rehearsal. In the 2009 Fall Season at the Blackfriars Playhouse, we produced this silly and satirical restoration play in which a character named Mr. Bayes is trying to direct the final rehearsal of his fabulous new play. I called that show “a goofy barrel of fun” because it lovingly lampoons the art of making theatre in every possible way. When we first meet Rover in Wild Oats, he’s rehearsing lines from The Rehearsal while his friend comments on them:

ROVER “The brisk li-li-lightning I.”
DICK (Harry) Studying Bayes, eh, Jack?”
ROVER “I am the bold Thunder.”
DICK (Harry) (aside) I am if he knew but all.
ROVER Our first play is Lear. I was devilish imperfect in Edgar t’other night at Lymington. I must look it over.

In The Rehearsal, Bayes has written a prologue that includes dialogue between the characters of Thunder and Lightning. In this tiny bit that Rover quotes, Bayes is giving line-readings to the actors playing Thunder and Lightning, telling them how they should be performing their parts. What Rover doesn’t know is that his fellow-actor friend, who goes by the name Dick Buskin, is actually Harry Thunder. After parting ways with his friend Dick, Rover says “I am the bold Thunder” two more times and inadvertently becomes known as the rich Mr. Thunder. This mistaken identity is one of the biggest plot-driving points of the whole play, and it all comes from the lost, hilarious, completely ridiculous play The Rehearsal.

If you did not catch our production of The Rehearsal last Fall Season, at least you now know the context for the reference in Wild Oats. If you did see our production last Fall, you now get to have insider, first-hand experience with this engine-driving plot point in Wild Oats. Either way, if you run into James Keegan and René Thornton, Jr. out on the streets of Staunton, you can ask them if they wouldn’t mind giving you a little taste of their Thunder and Lightning.