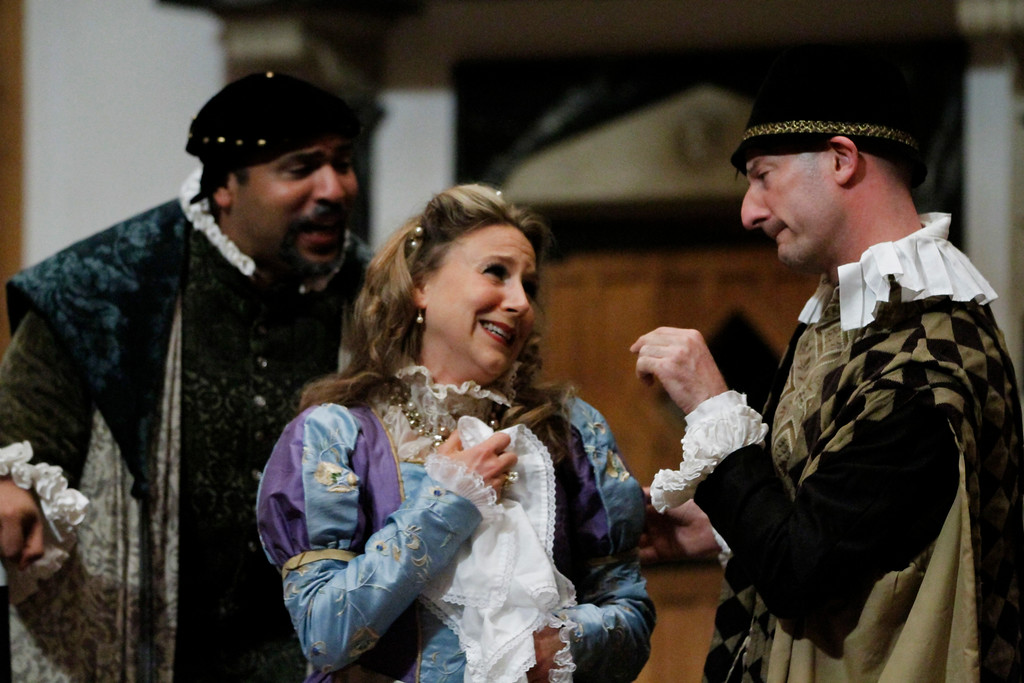 René Thornton, Jr., Ginna Hoben, and Daniel Kennedy in THE TAMING OF THE SHREW. 2010. 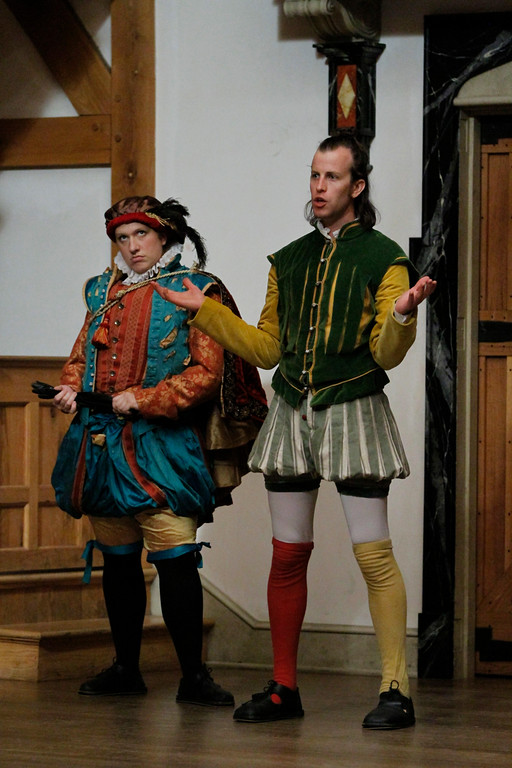 Allison Glenzer and Chris Johnston in THE TAMING OF THE SHREW. 2010. 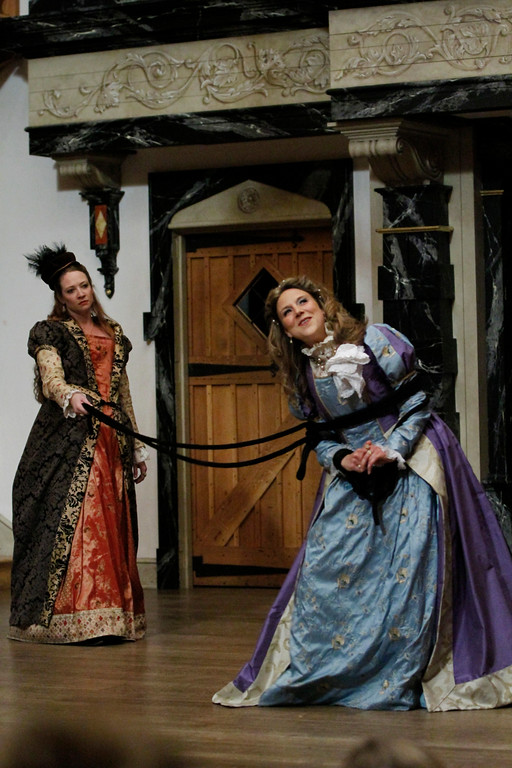 Sarah Fallon and Ginna Hoben in THE TAMING OF THE SHREW. 2010. 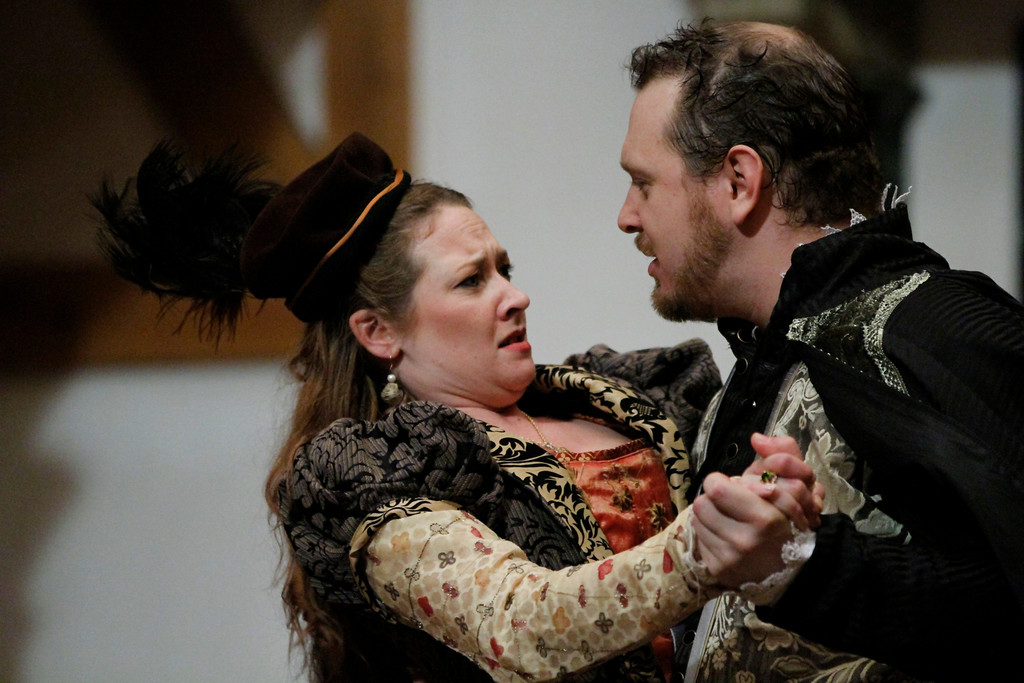 Sarah Fallon and Benjamin Curns in THE TAMING OF THE SHREW. 2010. 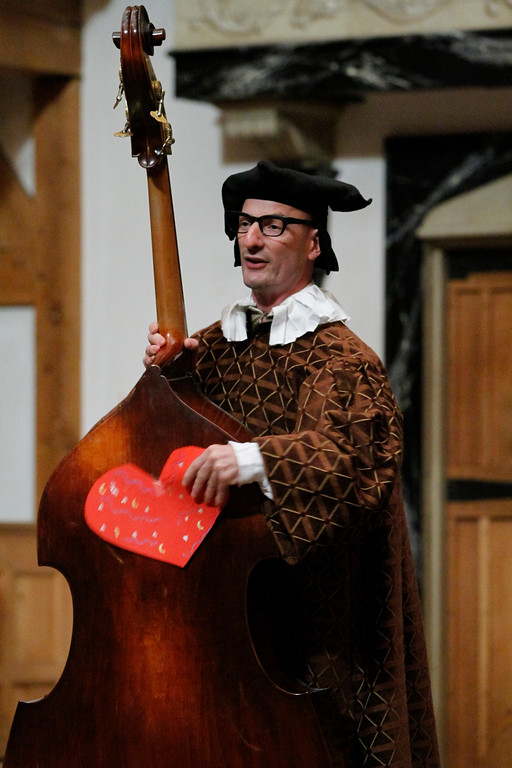 Daniel Kennedy in THE TAMING OF THE SHREW. 2010. 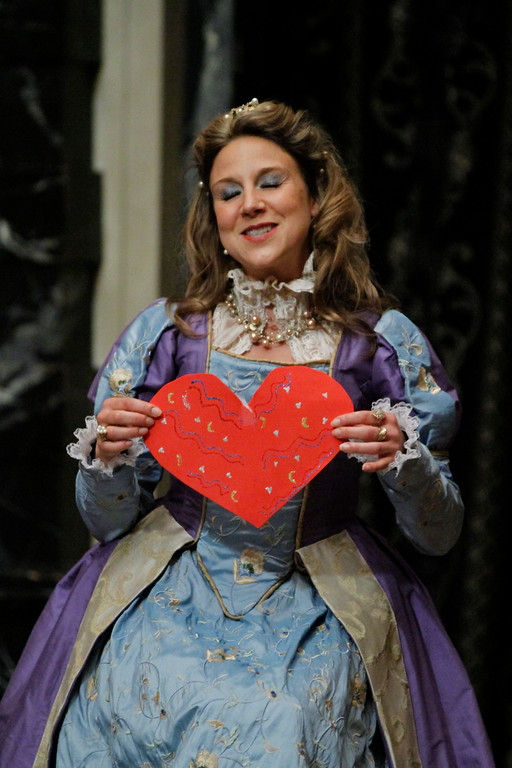 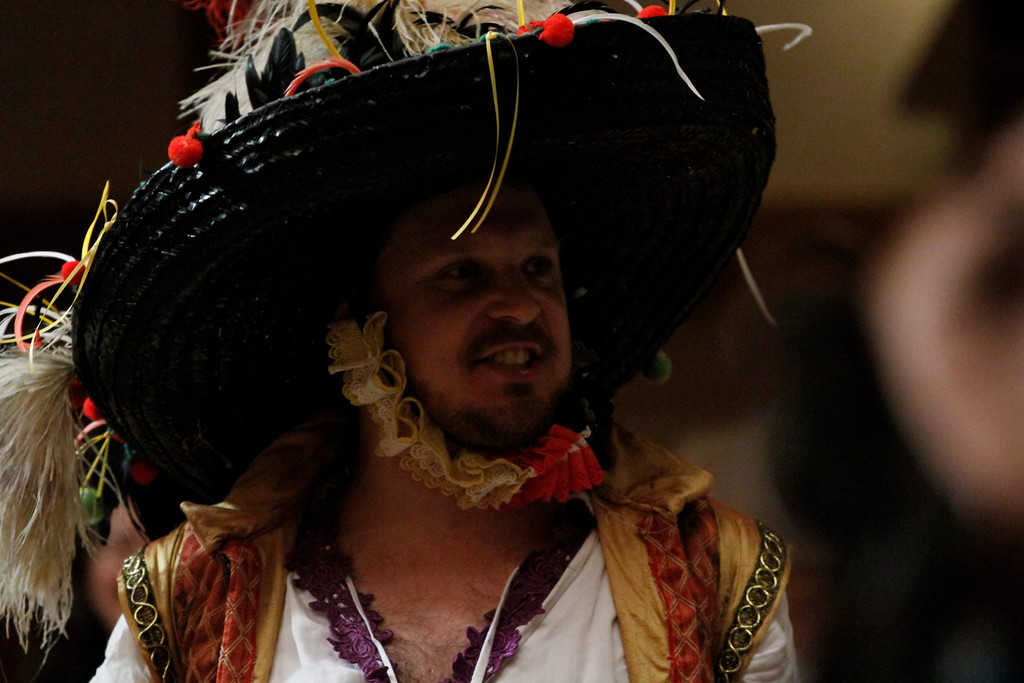 Benjamin Curns in THE TAMING OF THE SHREW. 2010. 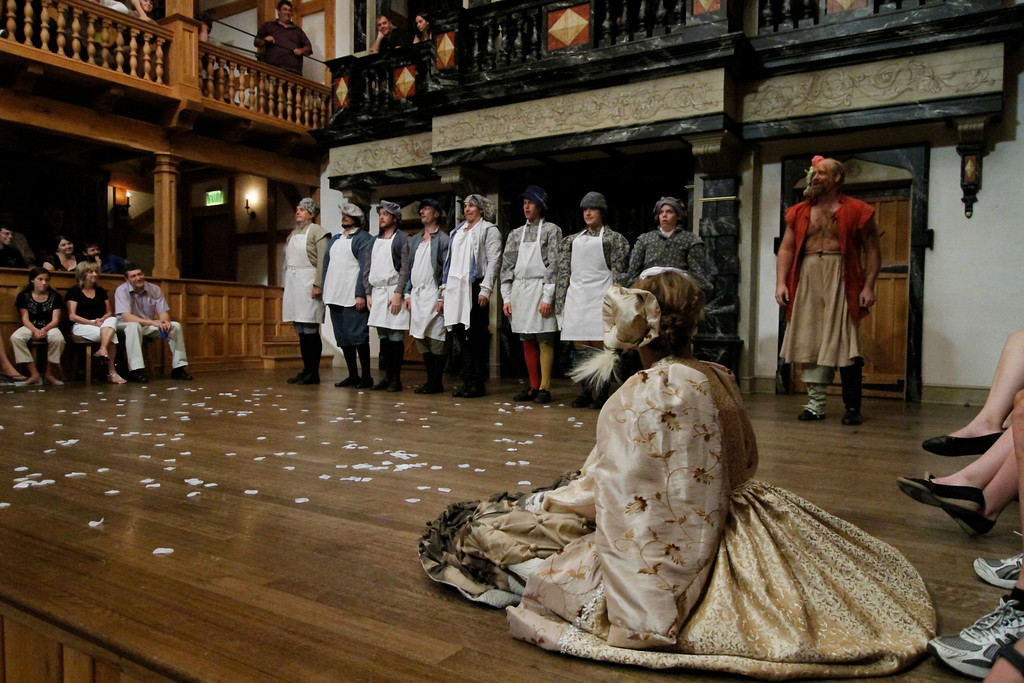 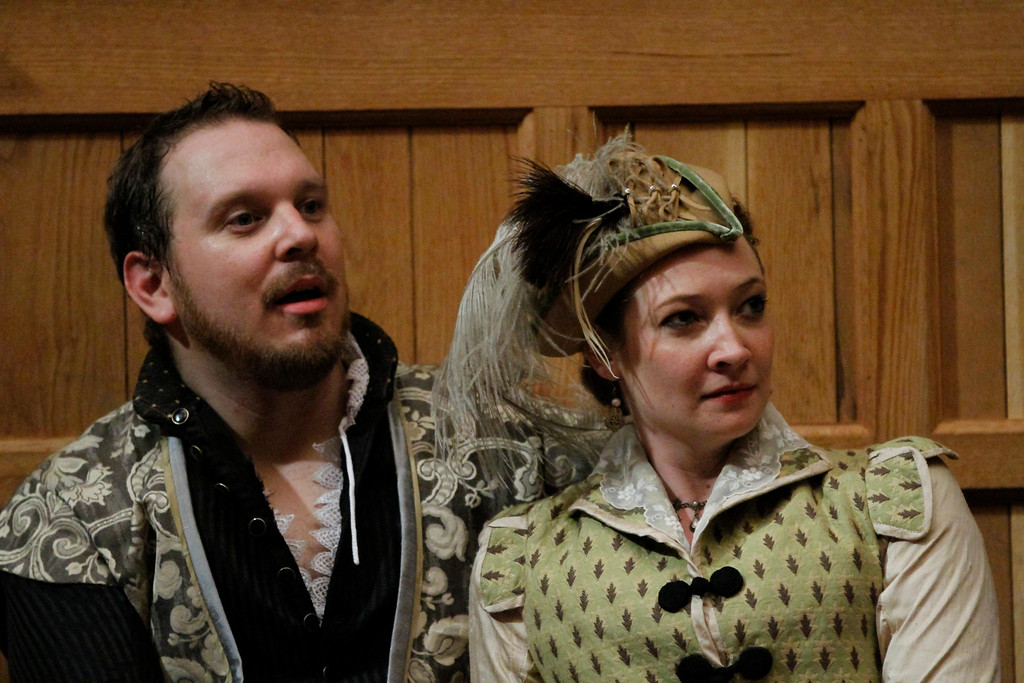 Benjamin Curns and Sarah Fallon in THE TAMING OF THE SHREW. 2010.

Stuff that happens in the induction

stuff that happens in the pleasant comedy

The Taming of the Shrew is an Elizabethan farce that addresses the issues of freedom, equality, and the primacy of marriage. Yet, many have criticized and condemned it for being a sexist play that degrades women. Many productions have reinforced this false perception of chauvinism by having a macho Petruchio manhandle a neurotic Kate until she is beaten into an obedient and submissive servant. These productions, in my opinion, miss the mark in getting to the heart of Shakespeare’s funniest love story that ends with his happiest couple.

One of the key factors in seeing this play as a true love story rests in believing that Kate and Petrucio fall in love by the end of their volatile first meeting. While some may balk at the credibility of “love at first sight,” many of us have had similar experiences in which we somehow knew right away that we had met our soulmate. Certainly Rosalind and Orlando, Miranda and Ferdinand, as well as Juliet and Romeo (not to mention hundreds of couples from literature and film over the centuries) reflect this deeply strange, yet wonderful, human phenomenon.

Another important factor in recognizing the love story is hearing how Petruchio plays with words and how he invites Kate to play that game with him. As he waits to meet her for the first time, Petruchio clearly tells the audience that he will “woo her wihth some spirit” by telling her the opposite of the truth:

Say that she rail, why then I’ll tell her plain
She sings as sweetly as a nightingale.

He continues to play these word games in every scene and begins more directly to solicit Kate’s joining him in the scene with the Haberdasher. Kate is so frustrated by Petruchio’s insistence that a fine looking hat is a “walnut-shell” that she delivers a beautiful, heartfelt, eight-line speech about how she will not be denied the right to speak her mind and that she will “be free, even to the uttermost, as I please, in words.” Petruchio gets more overt in his word games by responding with an affirmation:

Why thou say’st true. It is a paltry cap,
A custard-coffin, a bauble, a silken pie.
I love thee well in that thou lik’st it not.

But Kate still doesn’t understand this game of words, so Petruchio goes even further at the end of the scene and deliberately misspeaks about the time they will arrive at Kate’s father’s house…she still doesn’t get it. After playing with the hat and the time, Petruchio takes an even bigger step toward the obvious by calling the sun the moon. After she finally agrees with him and calls the sun the moon, Petruchio responds, “Nay then, you lie. It is the blessed sun.” This time, in the middle of her frustration, Kate has an epiphany:

Then God be blest, it is the blessed sun.
But sun it is not when you say it is not,
And the moon changes even as your mind.
What you will have it nam’d, even that it is,
And so it shall be so for Katherine.

This moment is when Kate finally starts to play with Petruchio. I believe it’s the pivotal moment of the play. Right after this moment, Petruchio calls an old man a woman and bids Kate to embrace “her.” Instead of merely embracing “her,” Kate goes further and calls this old man a “young, budding virgin.” Not only has Kate begun to play with Petruchio, she has started her journey to discover what it really means to be free in words and she does it better and plays even harder than Petruchio could have guessed. She out-Petruchios Petruchio.

Much ado is made of Kate’s final speech. It’s long. It’s the longest speech in the play (and a third of Kate’s total lines). It deals with the duty wives owe their husbands. When anybody does a production of Shrew, the first question asked is “What are you going to do with Kate’s final speech?” Our answer for this production: Kate is going to speak those words. Here’s what we know: Kate looked at the sun and called it the moon; Kate looked at an old man and called him a sweet budding virgin. Then Kate looks at two wives and tells them what wives owe their husbands. You decide what you think she means. One of Petruchio’s great lines is “If she and I be pleased, what’s that to you?” This married couple is now operating as a team and on a level that we can only hope to follow.

In all of his plays, Shakespeare creates strong, articulate, intelligent women who often dominate and instruct the men. Kate never loses her strength of character; Petruchio simply helps her to see how she can channel that strength to be free in words. Shakespeare’s Shrew gives us a picture of two extroverts born to be together and destined to thrive in the best possible marriage of equals.